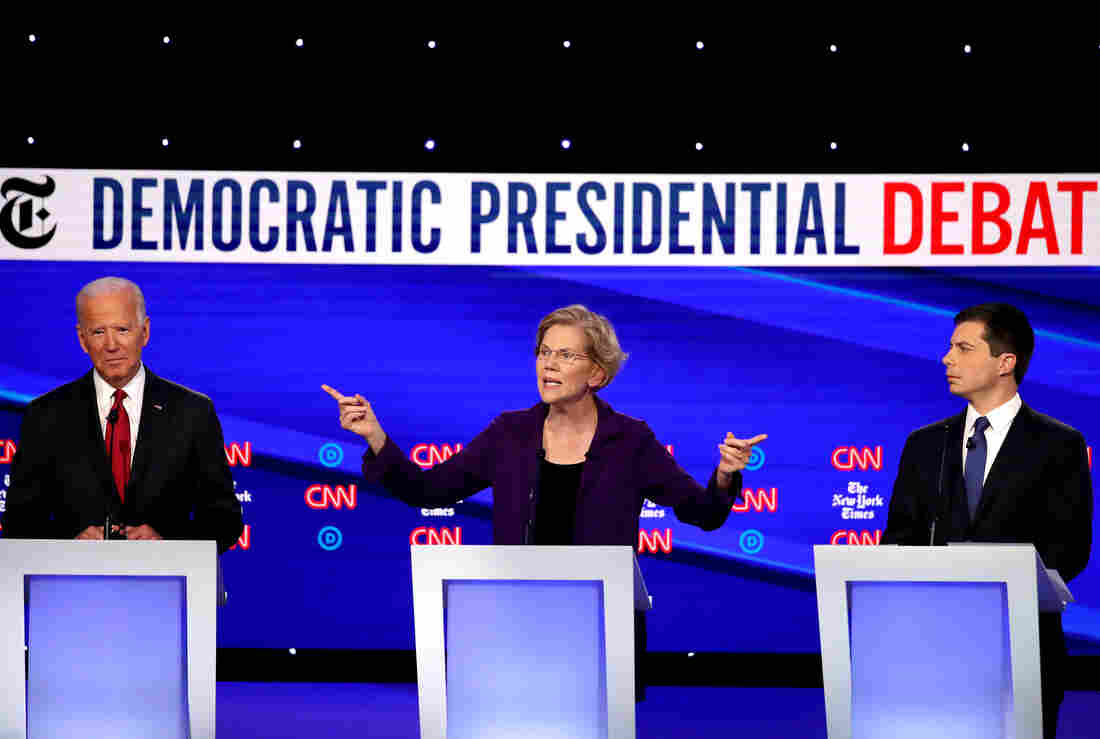 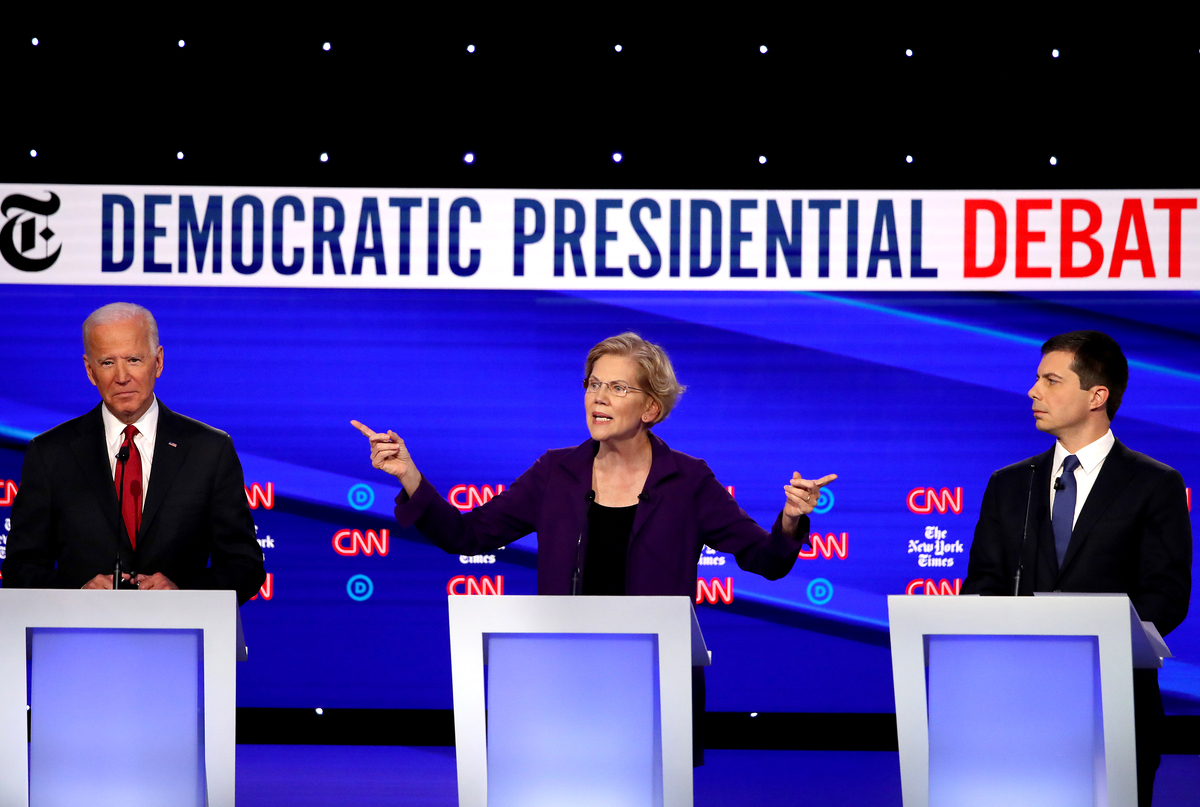 The fourth Democratic debate was a long one, about three hours, and ended after 11 p.m. ET.

You might not have made it through the whole thing, but there were some potentially consequential moments.

1. The scrutiny came for Warren, and her vulnerabilities were exposed some

Sen. Elizabeth Warren of Massachusetts was under fire Tuesday night from several opponents, and when that happens to a candidate, you know they're a front-runner.

Last week, Warren caught up to former Vice President Joe Biden in an average of the national polls, and on Tuesday night she found herself hemmed in, particularly by South Bend, Ind., Mayor Pete Buttigieg and Minnesota Sen. Amy Klobuchar.

Buttigieg attacked Warren for promoting "Medicare for All," while not having a detailed plan or saying how she would pay for it.

"Look, this is why people here in the Midwest are so frustrated with Washington in general and Capitol Hill in particular," Buttigieg told Warren. "Your signature, Senator, is to have a plan for everything except this."

"I think as Democrats we are going to succeed when we dream big and fight hard, not when we dream small and quit before we get started," Warren said.

But while a similar line from Warren at an earlier debate got thunderous applause, it didn't land the same way this time, and Klobuchar was ready with a response, going after Warren for, in her view, dismissing others' plans because they weren't hers.

"You know, I think simply because you have different ideas doesn't mean you're [not] fighting for regular people," Klobuchar said.

The criticisms strike at Warren's core vulnerability — that she's less electable than others in the race because, one, her policies are too liberal and, two, the former Harvard professor is dismissive and elitist.

2. The Biden versus Warren Rorschach test

An exchange later in the debate certainly caught the attention of social media, but it was one that was in the eye (and ear) of the beholder.

Here's that Biden vs. Warren exchange on the CFPB >> pic.twitter.com/NE2fPCwvZO

Warren was touting her role at the inception of the Consumer Financial Protection Bureau during the Obama administration when former Vice President Joe Biden objected.

"I agreed with the great job she did and I went on the floor and got you votes," Biden contended, his voice starting to rise. "I got votes for that bill. I convinced people to vote for it, so let's get those things straight, too."

The fight over the CFPB was my daily beat for basically a year. I don't remember Joe Biden being involved whatsoever. His adviser Jared Bernstein was a strong supporter but Biden was 100% AWOL. It was well known he and Warren clashed, so it made sense he stayed out. #DemDebate 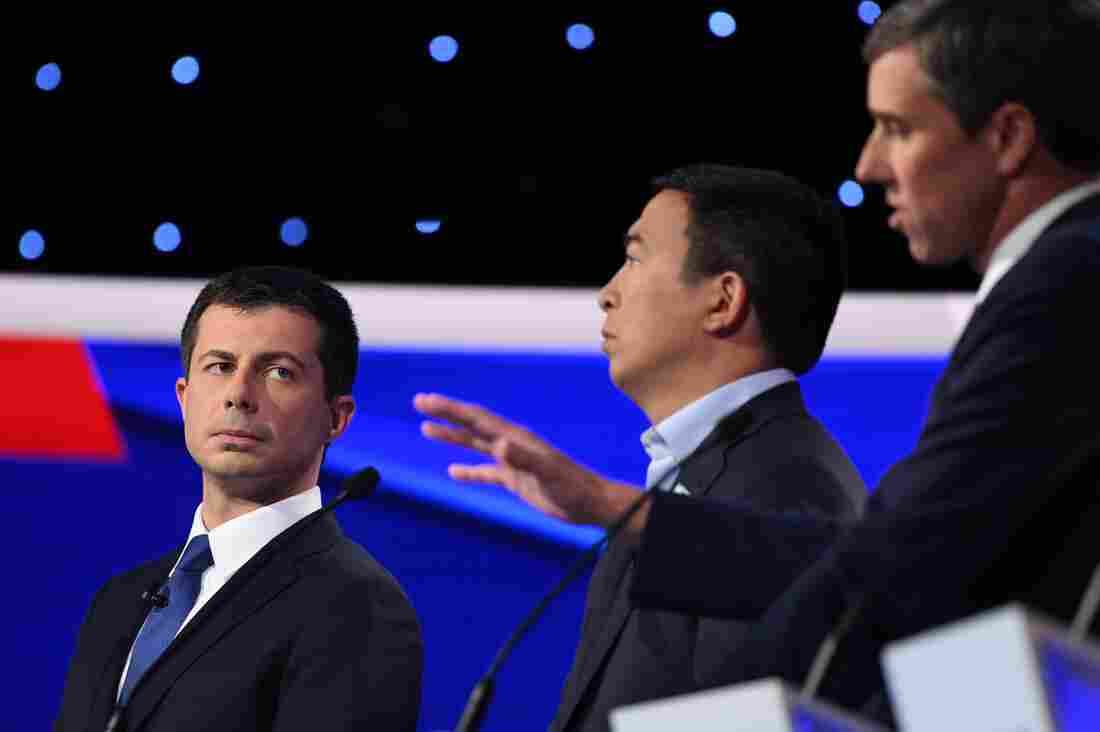 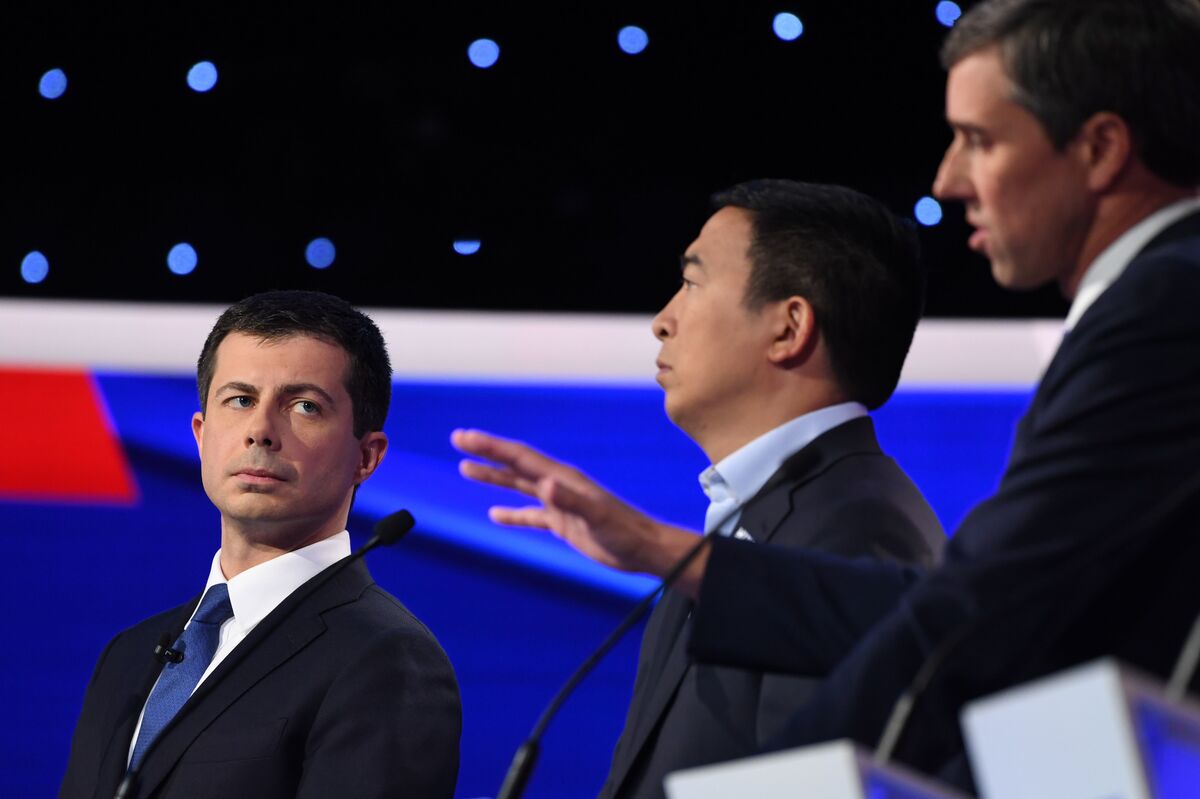 Not exactly thanking Biden. The reaction to this moment was swift and fierce. (Just see the replies in this tweet.) Some saw Biden as yelling, "mansplaining" and trying to take credit for something Warren did. Some saw Warren, though, as ungracious, petty and ungrateful.

It's not clear what Biden's role was exactly in whipping up votes for the CFPB. Ryan Grim at The Intercept noted that he covered the agency's creation and recalled that while a top Biden adviser was involved, Biden was not.

It should be noted that Biden and Warren have a history on economics and, especially, bankruptcy law. Biden, a former senator from Delaware, home of many of the nation's credit card companies, has been accused of protecting them, and Biden and Warren clashed when she testified on Capitol Hill about bankruptcy law in 2005.

3. Buttigieg may be back in the game

The small-town mayor, who has become a darling of the donor class, controlled multiple exchanges and had a very strong night. In addition to taking on Warren on health care, he also went after former Texas Rep. Beto O'Rourke on his proposal to take away privately owned guns and Hawaii Rep. Tulsi Gabbard on her support of President Trump pulling U.S. troops out of Syria.

An NPR/PBS NewsHour/Marist poll from July found that 70% of Americans thought Medicare for All as an option was a good idea, while just 41% approved of completely replacing private insurance.

Only three candidates — Warren, Biden and Sanders — have been polling in double digits nationally for most of this campaign. Those three encapsulate the progressive (Warren, Sanders) versus moderate/incremental wings (Biden) of the party.

But Buttigieg positioned himself a little differently, saying there was a "false choice" being presented. He said he disagreed with Biden that Trump is an "aberration," arguing that the president is a symptom of what he sees as the challenge of a changing country.

"Yes, we have to fight," he said. "Absolutely we have to fight for the big changes at hand. But it's going to take more than fighting. ... Think about what the president can do to unify a new American majority for some of the boldest things that we've attempted in my lifetime."

Can he sell his third way? He's at least positioned himself for the pragmatic lane if Biden falters, and he could pull from Warren's support given their overlap with college-educated white voters.

4. Questions about Hunter Biden were over and done with surprisingly quickly

The candidates — and, frankly, the moderators — didn't seem to want to go very deep on Biden's son Hunter and his business ties. It's somewhat surprising there wasn't more follow-up given just how much this has been talked about in recent weeks since Democrats opened their impeachment inquiry into Trump after the president's phone call with Ukraine's president.

In that call, Trump asked Ukraine's president to investigate the Bidens, after withholding military aid to the country. 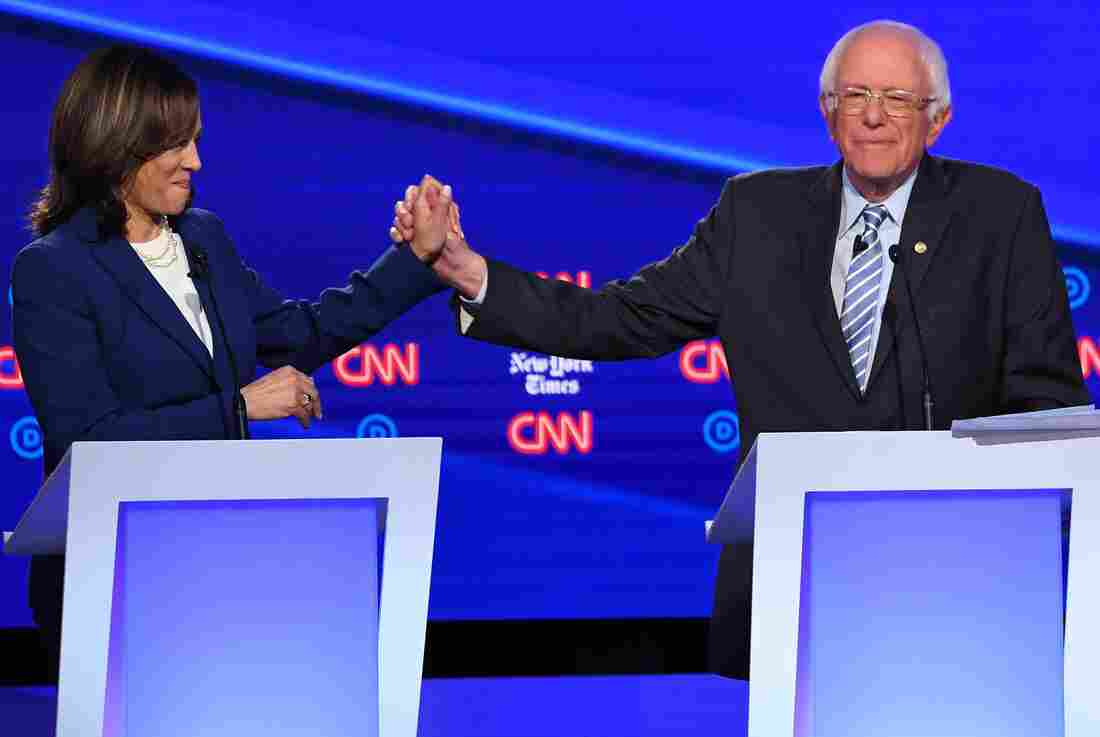 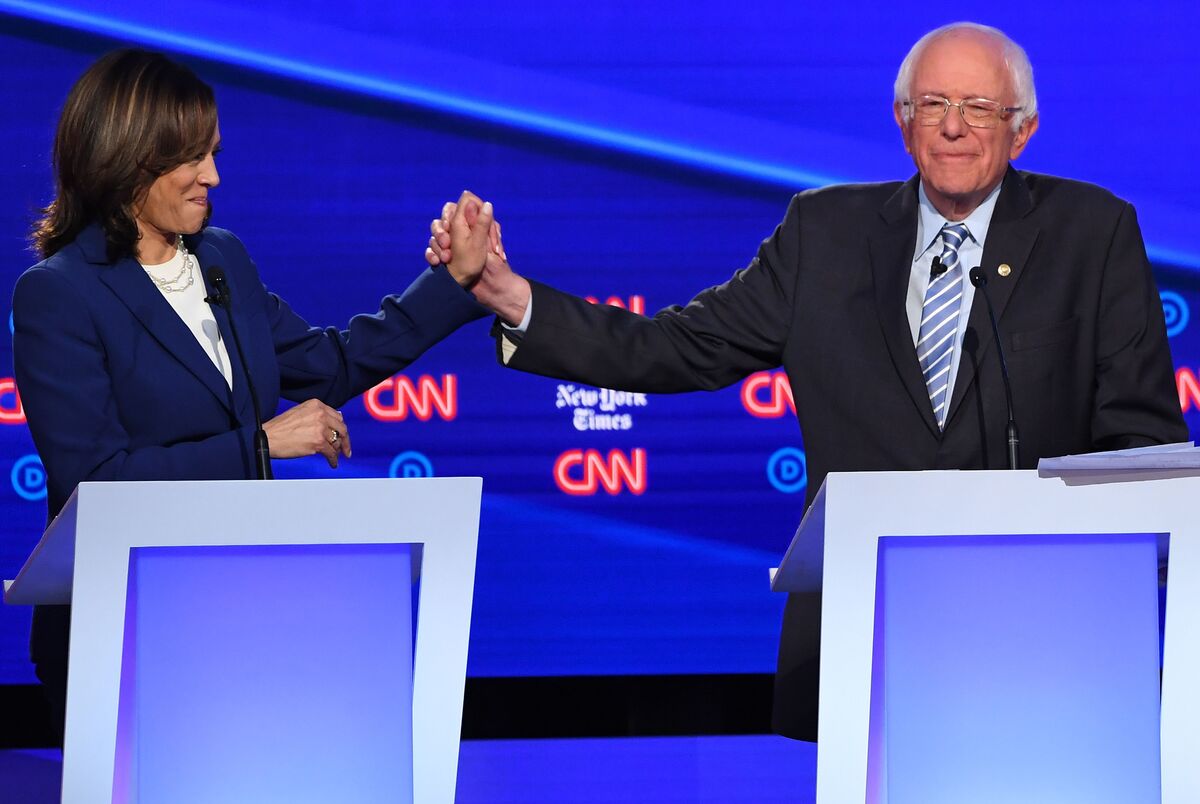 "Look, my son did nothing wrong," Biden said. "I did nothing wrong. I carried out the policy of the United States government in rooting out corruption in Ukraine. And that's what we should be focusing on."

Asked in a follow-up whether he'd made a mistake letting his son serve on a board of a Ukrainian gas company while he was handling Ukraine policy in the Obama administration, Biden said, "I never discussed a single thing with my son on anything having to do with Ukraine."

And that was essentially the end of the conversation. None of the other candidates wanted to touch it.

5. The previously taboo issue of age was broached

The top three Democratic candidates — Warren, Biden and Sanders — are all septuagenarians. Sanders is 78, Biden 76 and Warren 70. In the runup to the debate Sanders had a heart attack that took him off the campaign trail, and that became a reason for the moderators to ask about age. 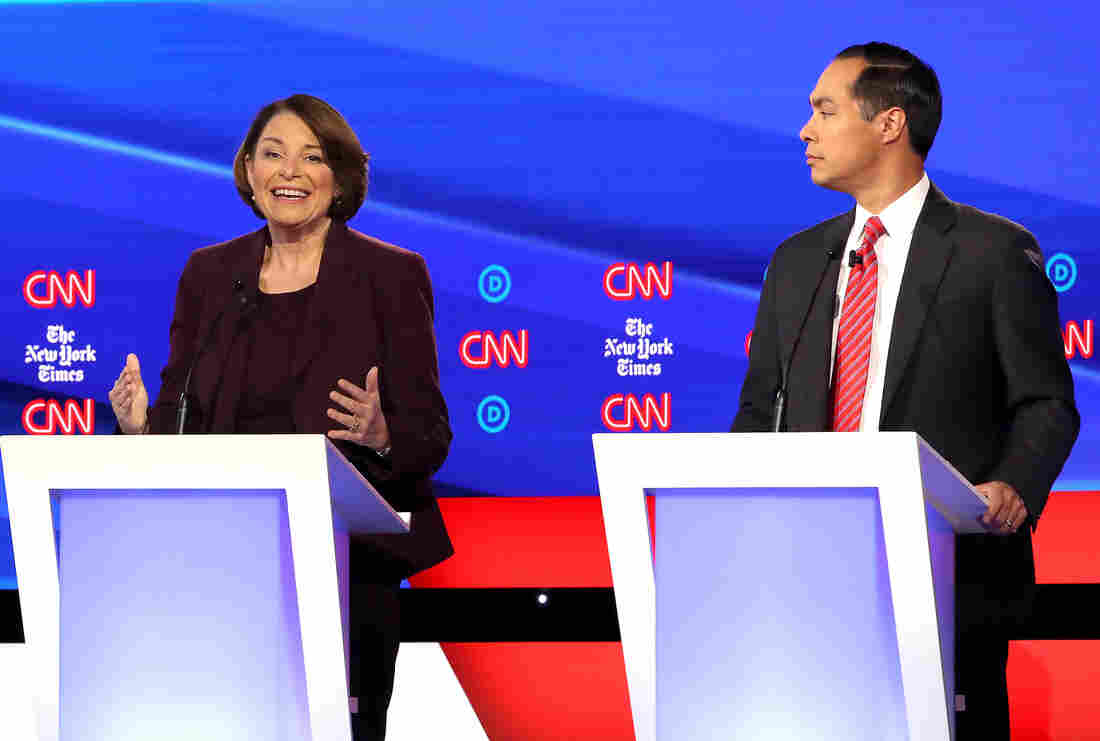 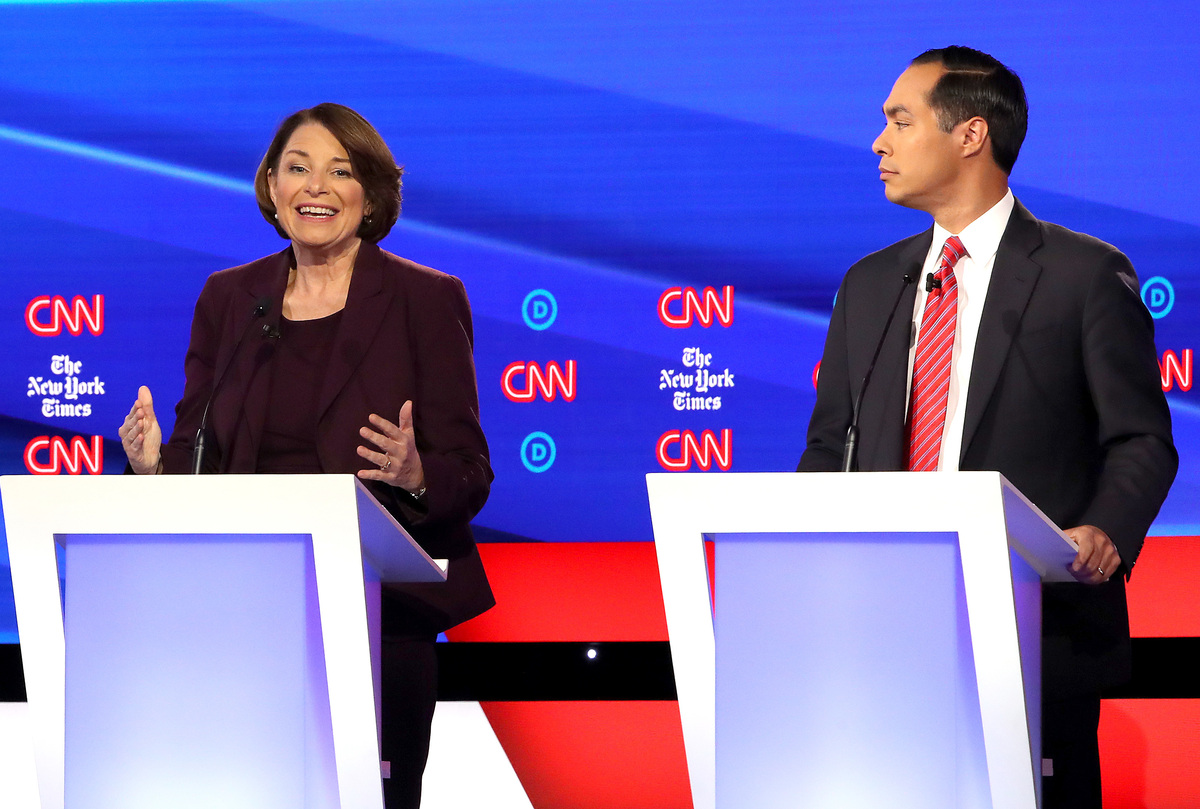 Minnesota Sen. Amy Klobuchar speaks as former Secretary of Housing and Urban Development Julián Castro looks on during the debate.

"I'm healthy. And feeling great," said Sanders, who looked healthy and rested, and who, by the way, polls best of the candidates with young voters. Sanders then used the moment to plug an upcoming rally in Queens, N.Y., where he will officially receive the endorsement of Rep. Alexandria Ocasio-Cortez, D-N.Y.

Biden was asked about being 80 and handling the duties of president. "Look," Biden said, "one of the reasons I am running is because of my age and my experience. With it comes wisdom."

But it's a real issue of who's next for the Democratic Party. For no matter how many candidates are running, the bench is seen as pretty thin for national candidates of the next generation.

6. Health care was again dominant, while immigration, climate change and race didn't even come up

Once again, Democrats showed the biggest fissure in the party is on health policy. It has dominated Democratic debates for a decade, and it continuously rates as the top issue for Democrats.

An earlier debate was criticized for not addressing women's health and reproductive rights. But Tuesday night the candidates discussed it. And foreign policy received arguably the most serious treatment so far of the Democratic debates.

Other policy areas of interest to the party were left off the table. Namely immigration, climate change and race. It's not as though the candidates don't discuss these topics (there was a multihour climate change candidate forum on CNN last month), but it was notable that those subjects were left out Tuesday night.