Accessibility links
For NASA's New Suits, 'Mobility' Is The Watchword The space agency unveils two new spacesuits for a planned 2024 return to the moon. They're designed to be more comfortable and easier to move around in than their Apollo-era forerunners.

For NASA's New Suits, 'Mobility' Is The Watchword

For NASA's New Suits, 'Mobility' Is The Watchword 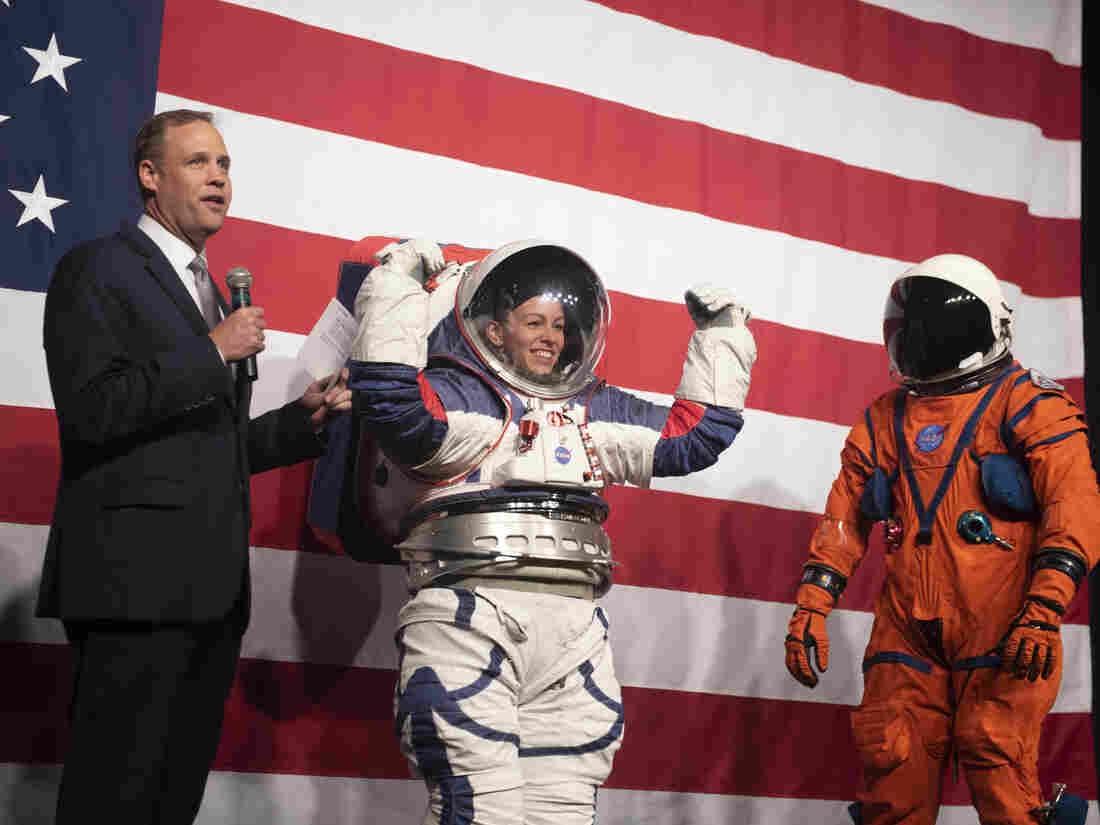 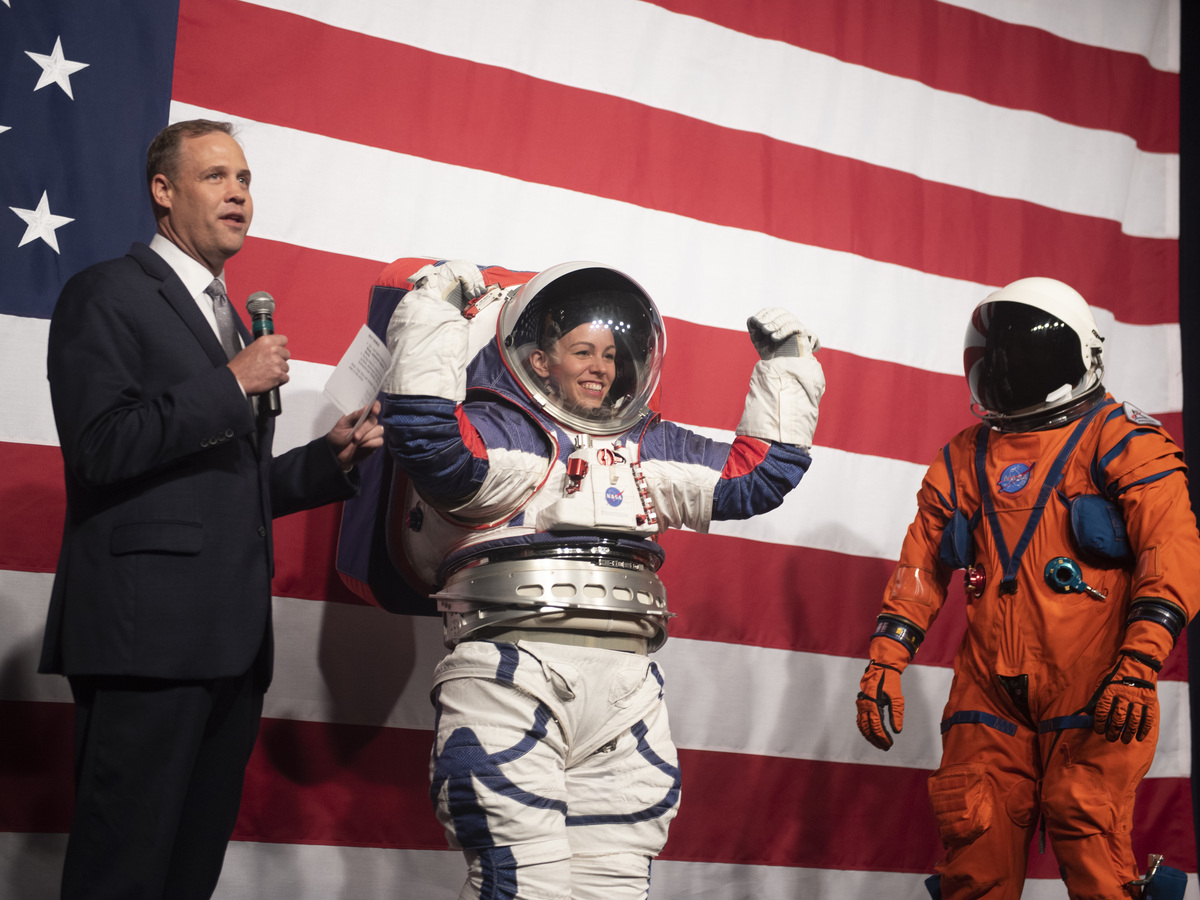 NASA has unveiled prototypes of its next-generation spacesuits to be worn inside the Orion spacecraft and on the surface of the moon when American astronauts return there as soon as 2024.

At the space agency's headquarters in Washington, D.C., two NASA engineers modeled the new suits destined for the Artemis program, one known as the Exploration Extravehicular Mobility Unit (xEMU), designed for walking around the lunar surface, and the other, the Orion Crew Survival System, a bright orange pressure suit to be worn when astronauts launch from Earth and return.

The design criteria? After keeping the crew safe, including America's first female moonwalker, it's all about mobility.

To that end, the suited models demonstrated bending, squatting and walking around in the bulky garments. 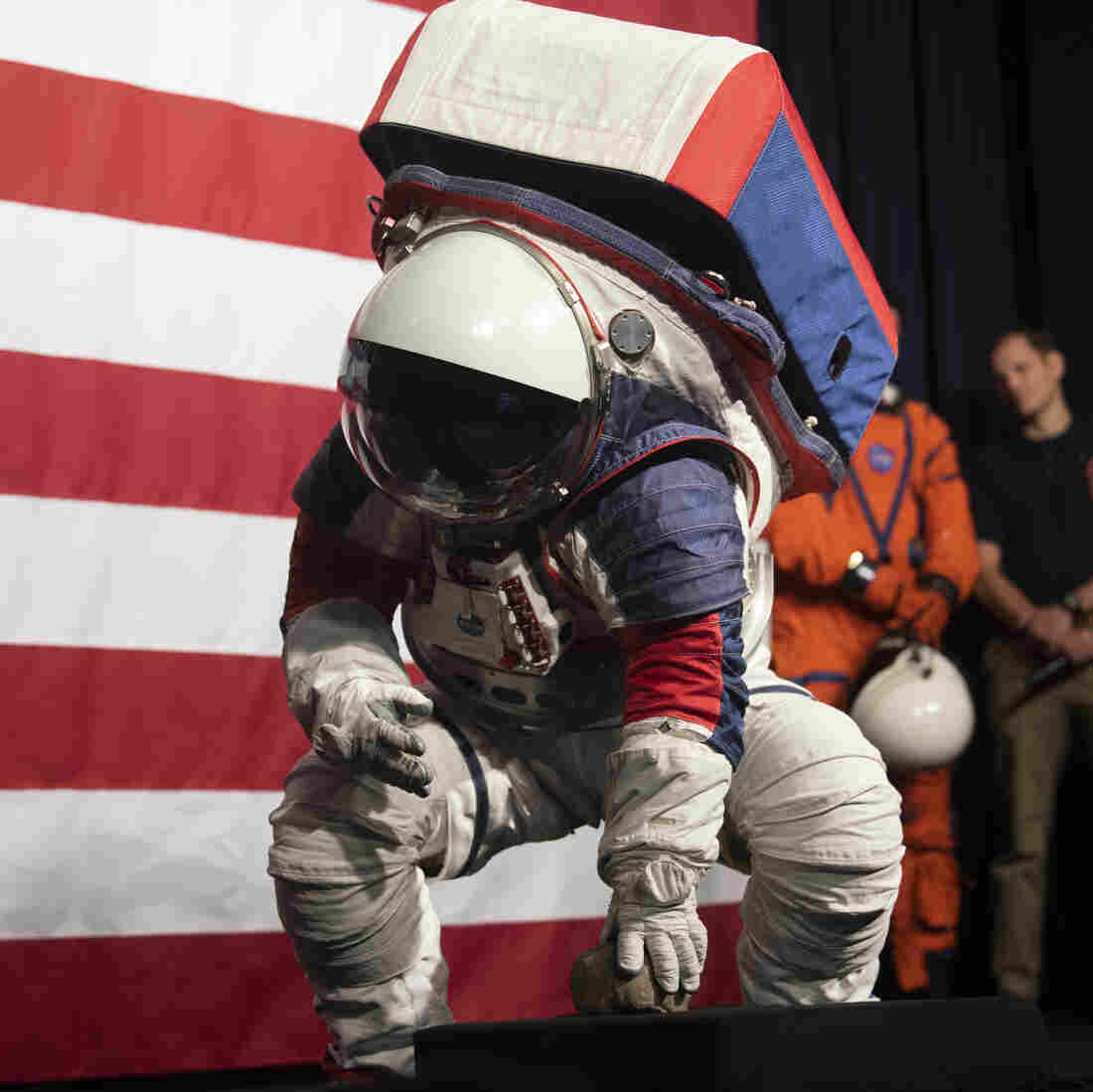 Kristine Davis bends down to pick up a rock during a demonstration of the mobility of the Exploration Extravehicular Mobility Unit (xEMU), one of two NASA spacesuit prototypes for lunar exploration. Kevin Wolf/AP hide caption 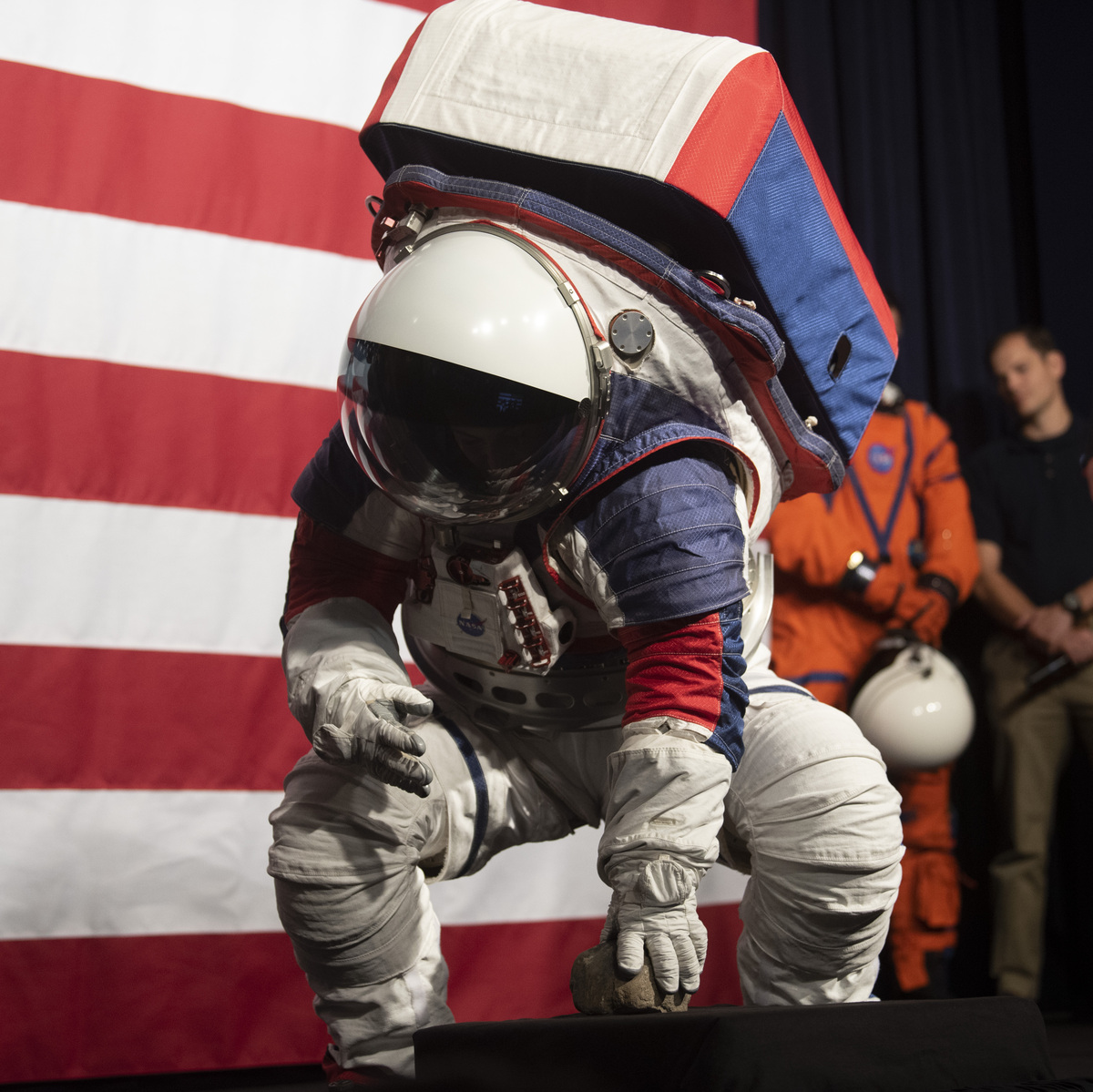 Kristine Davis bends down to pick up a rock during a demonstration of the mobility of the Exploration Extravehicular Mobility Unit (xEMU), one of two NASA spacesuit prototypes for lunar exploration.

"This is the first suit we've designed in about 40 years," Chris Hansen, a manager at NASA's spacesuit design office, said. "We want systems that allow our astronauts to be scientists on the surface of the moon."

Amy Ross, NASA's lead spacesuit engineer, said: "Basically, my job is to take a basketball, shape it like a human, keep them alive in a harsh environment and give them the mobility to do their job."

Another spacesuit engineer, Kristine Davis, sported the new red, white and blue xEMU, which includes a ring at the midsection to make it easier for future moonwalkers to get around than had their Apollo-era counterparts, the last of whom left bootprints on the moon in 1972.

"The mobility is one of the biggest things," astronaut Kate Rubins said at the event. For picking up a rock or setting up a scientific instrument, "you need that upper torso mobility," she said.

The Apollo moon suit, known as the Extravehicular Mobility Unit, or EMU, was famously so restricted that some astronauts preferred to "bunny hop," taking advantage of the moon's low gravity to lope over the surface.

Since well before the space shuttle program wrapped up in 2011, NASA has been an agency in search of a mission. In 1989, President George H.W. Bush first proposed a return to the moon "to stay" and ultimately, missions to Mars.

In March, the Trump administration directed NASA to land humans on the moon — preferably at the unexplored southern lunar pole — by 2024, with the eventual goal of landing on Mars.

"Ultimately the goal is this: We're going to Mars," NASA chief Jim Bridenstine said. "And in order to go to Mars, we need to use the moon as a proving ground."

The new xEMU is a one-size-fits-all garment designed for men and women — something that would have come in handy in March when the first planned all-female spacewalk had to be scrapped because one of two medium-sized suits on the International Space Station wasn't ready to go.

Astronaut Christina Koch had planned to spacewalk with Anne McClain, but because McClain preferred a medium suit and there was only one available, NASA swapped Koch for astronaut Nick Hague on the walk.

But NASA said Tuesday that it is going to try again for an all-female spacewalk on Oct. 21, this time with Koch and fellow astronaut Jessica Meir.

If all goes according to plan, the two will exit the International Space Station as part of a series of spacewalks to install new batteries on the aging orbital outpost.

.@Space_Station update: our first all-female spacewalk with @Astro_Christina and @Astro_Jessica will be Thursday or Friday to replace a faulty battery charge-discharge unit. We’ll have a telecon later today. More details: https://t.co/0T6OOfuQQc pic.twitter.com/zQ7cH4fIBg