Accessibility links
Michael McKinley, Former Pompeo Aide, Testifies In Impeachment Inquiry Michael McKinley says he quit his job and then testified to House investigators because of the use of ambassadors "to advance domestic political objectives." 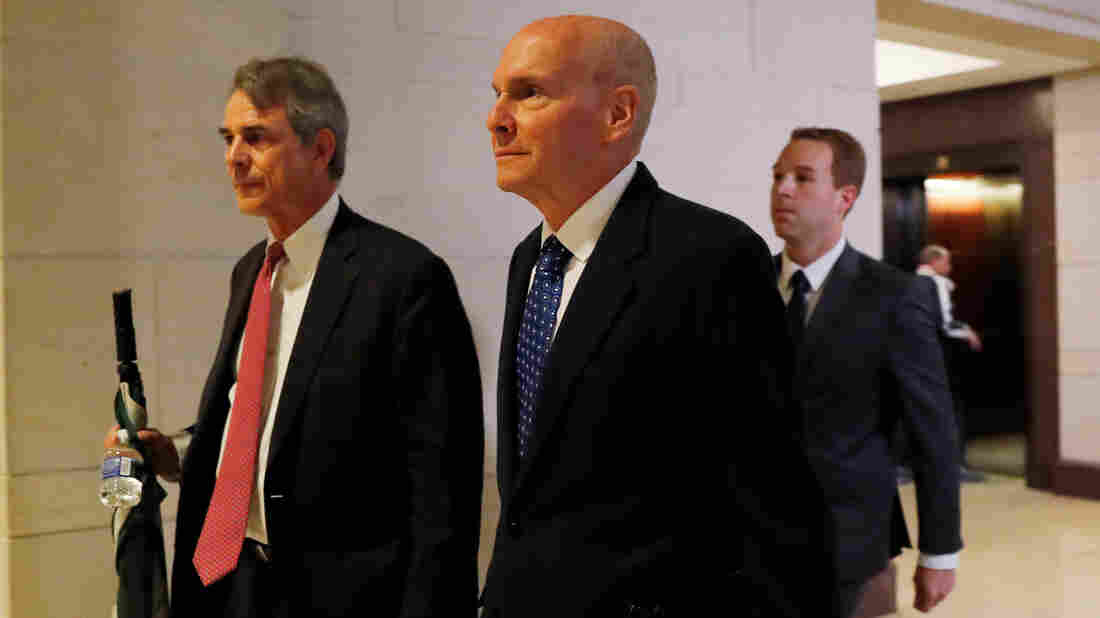 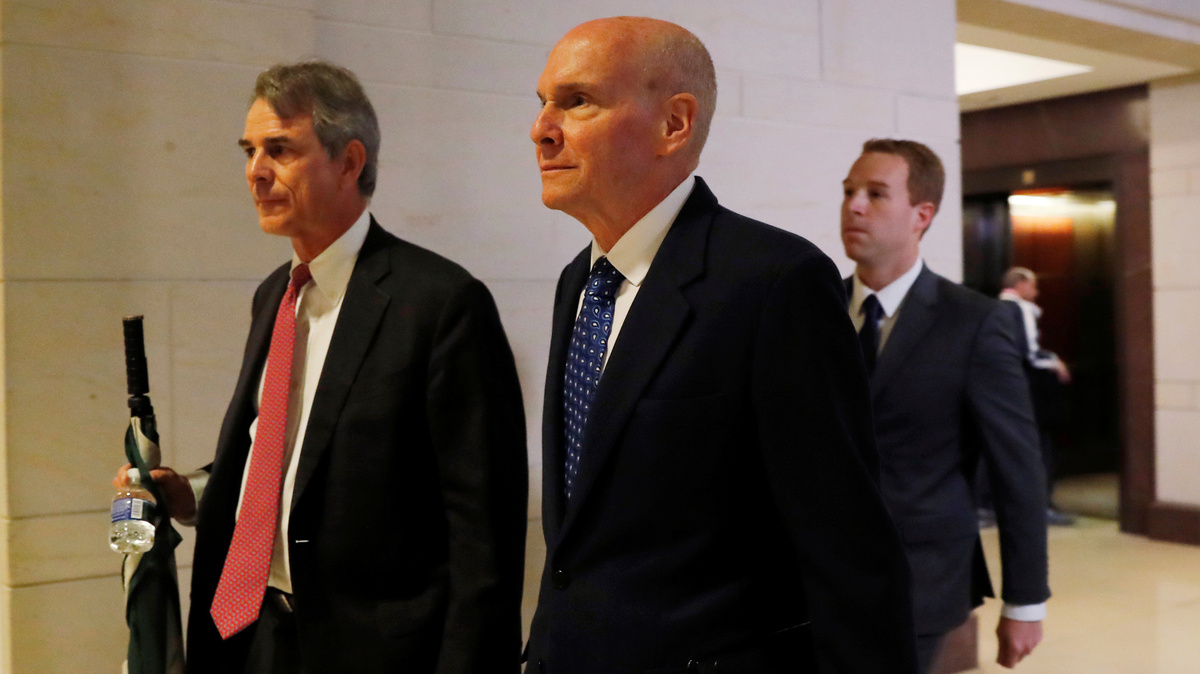 Michael McKinley (center), former senior adviser to Secretary of State Mike Pompeo, arrives to testify at a closed-door deposition as part of the Democratic-led impeachment inquiry into President Trump.

Michael McKinley, a seasoned diplomat — and up until last week, a senior adviser to Secretary of State Mike Pompeo — has testified before House committees that are leading the impeachment inquiry into President Trump.

McKinley's closed-door testimony on Capitol Hill Wednesday came as several current and former officials within the State Department have been angered by the department's handling of staff and its role in the Ukraine affair.

McKinley had been Pompeo's top adviser since May 2018, but he abruptly resigned on Friday. McKinley had been a diplomat for more than 35 years serving as U.S. ambassador to Afghanistan, Colombia, Peru and Brazil.

Excerpts of his testimony were released by a former colleague.

"The timing of my resignation was the result of two overriding concerns: the failure, in my view, of the State Department to offer support to Foreign Service employees caught up in the Impeachment Inquiry on Ukraine; and, second, by what appears to be the utilization of our ambassadors overseas to advance domestic political objectives," McKinley said in prepared remarks.

"I was disturbed by the implication that foreign governments were being approached to procure negative information on political opponents," he said. "I was convinced that this would also have a serious impact on foreign service morale and the integrity of our work overseas."

McKinley is the latest Trump administration official to come before the House Foreign Affairs, Intelligence and Oversight committees. 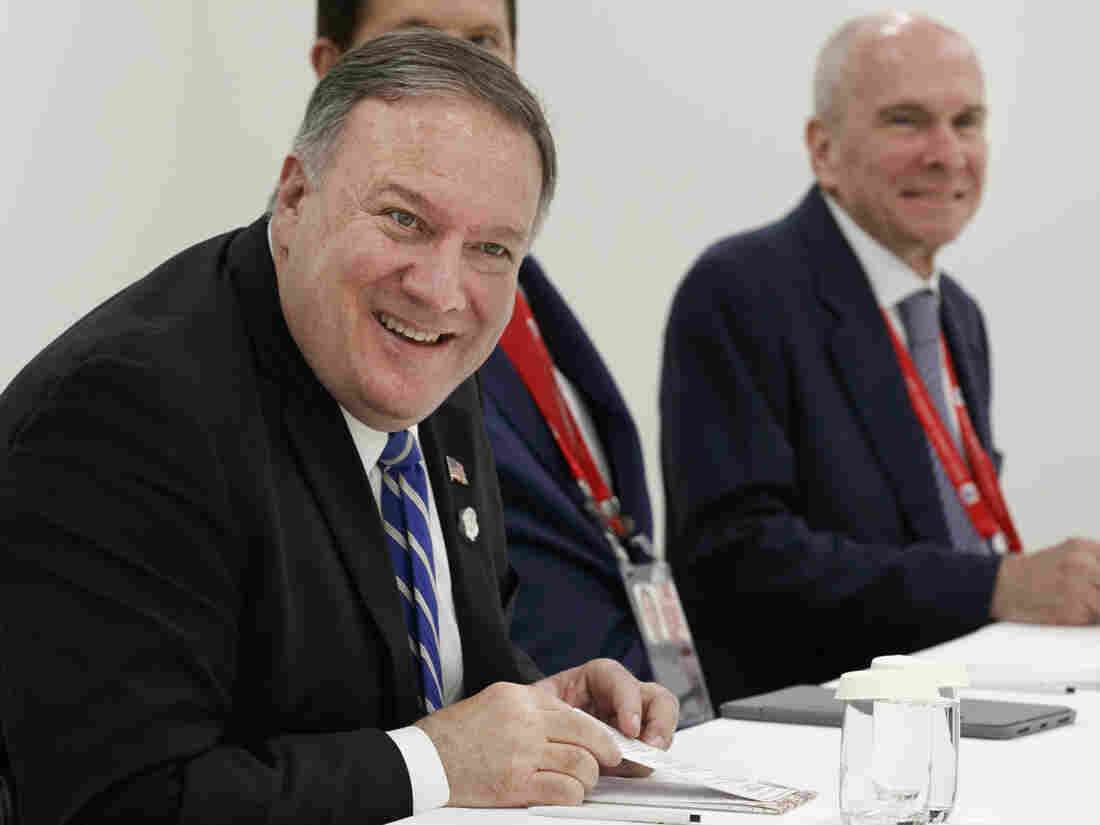 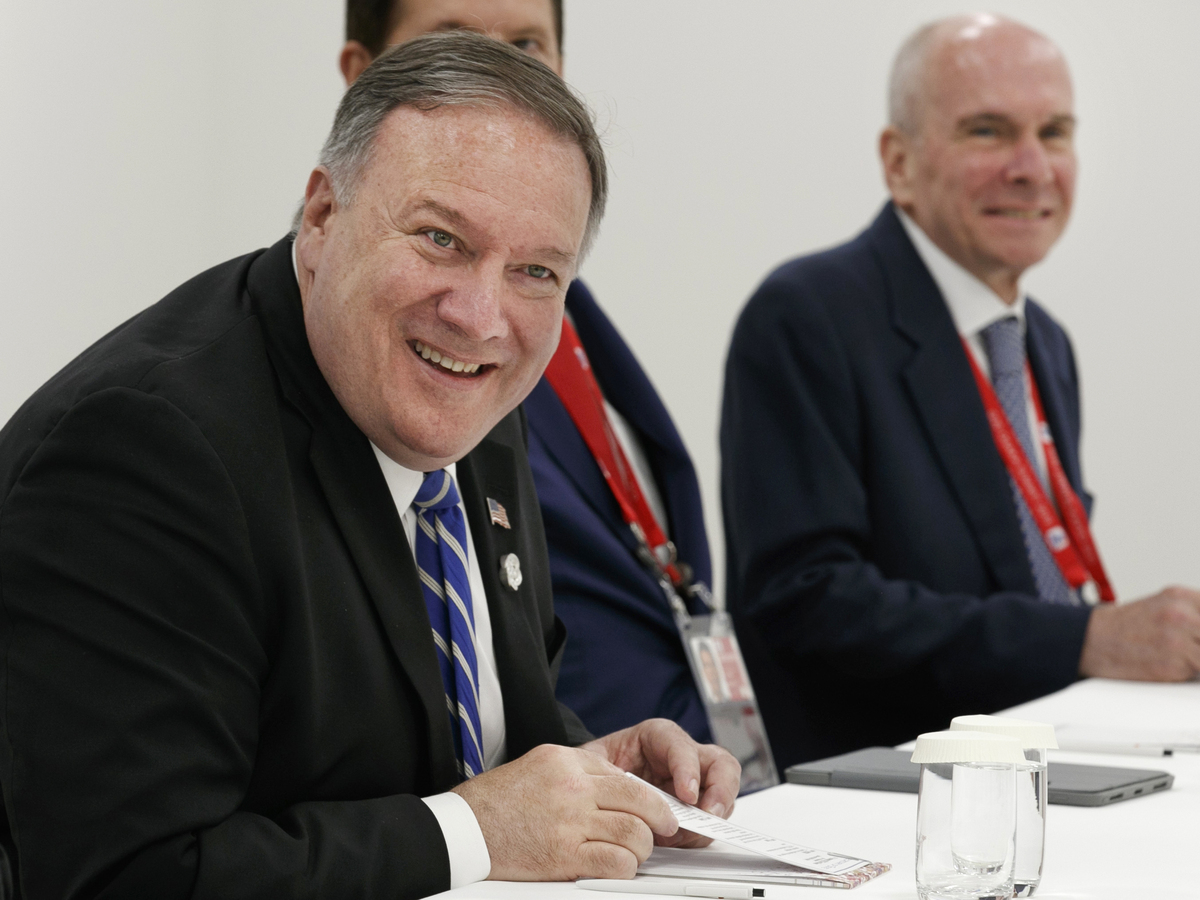 Secretary of State Mike Pompeo (left) sits down for a meeting in Osaka, Japan, on June 28. At right is Michael McKinley, Pompeo's de facto chief of staff. McKinley abruptly retired last week after a nearly four-decade career as an American diplomat.

"Friday was McKinley's last day at the State Department, and he sent an email to his colleagues there saying he was 'leaving the Department to pursue other opportunities, wherever they may lead.' He called his decision to quit 'personal,' adding, in his words, 'It's time after 37 years with the department.'

"That same day, Nancy Amons of the local NBC affiliate in Nashville interviewed the secretary of state, and when she tried to get him to say why McKinley quit, Pompeo stonewalled."

McKinley is not directly implicated in the Ukraine saga, but media reports ahead of his testimony portrayed him as a man concerned that other longtime diplomats were being treated unfairly in the Trump administration. His concerns may have been underscored by the recall of Marie Yovanovitch, the former U.S. ambassador to Ukraine, in May.

McKinley also said in his prepared remarks, "I could no longer look the other way as colleagues are denied the professional support and respect they deserve from us all."

On another front in the inquiry, Defense Secretary Mark Esper is reportedly declining to comply with a subpoena from House Democrats.

The Esper news was first reported by NBC News, which says a letter of refusal from the Pentagon cites a "number of legal and practical concerns" for not adhering to the subpoena, including executive privilege.

On Tuesday, House impeachment investigators were told by George Kent, the deputy assistant secretary in the State Department's Bureau of European and Eurasian Affairs, that he and others who typically handled U.S.-Ukraine policy affairs had been effectively sidelined by the Trump administration.

Those officials were replaced by the "three amigos" according to the recounting of Kent's testimony by Rep. Gerry Connolly, D-Va., who sits on the House Oversight Committee. As NPR reported, Connolly told reporters Tuesday that the personnel moves were agreed upon after a May 23 meeting called by acting White House chief of staff Mick Mulvaney.

The three amigos were Gordon Sondland, U.S. ambassador to the European Union; Kurt Volker, an envoy to Ukraine who has since resigned; and Energy Secretary Rick Perry.

Impeachment inquiry investigators have already heard testimony from Volker, and Sondland is scheduled to testify behind closed doors on Thursday. Perry has also been subpoenaed as part of the House probe.

The inquiry didn't take a day off on Monday — a federal holiday marking Columbus Day — as Fiona Hill, a former White House aide on Russia, spoke to lawmakers behind closed doors.

Yovanovitch, the recalled Ukraine ambassador, told lawmakers Friday during a more than nine-hour session that "there had been a concerted campaign against me, and that the [State] Department had been under pressure from the President to remove me since the Summer of 2018," according to prepared remarks ahead of her testimony.

On that call, Trump asked Zelenskiy to "look into" the Biden family, according to a memorandum of the conversation released by the White House last month.

A day before the White House released the transcript, House Speaker Nancy Pelosi, D-Calif., announced a formal impeachment inquiry into the president, after a whistleblower complaint was made about Trump's call with Ukraine's leader.