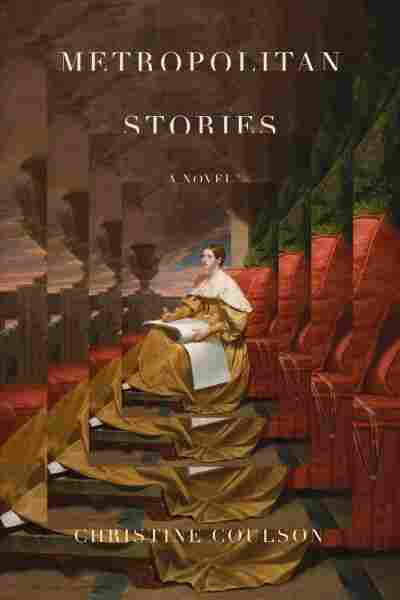 Admittedly, it's a little much.

"For the public this is one of those great and magnificent spaces that can be hugely intimidating," says Christine Coulson, standing in the museum's great hall. "But for me this feels like home."

Coulson worked at the Met for 25 years, often writing speeches or lectures for the museum's director to deliver. Now, she is writing in her own voice — and sometimes, in the voice of the artworks themselves.

Her debut novel, Metropolitan Stories, goes behind the scenes at the museum. It's a series of loosely connected stories about the people and objects that fill the galleries.

She gave NPR a tour of what she calls her "second home," featuring some of the objects that made their way into the book. 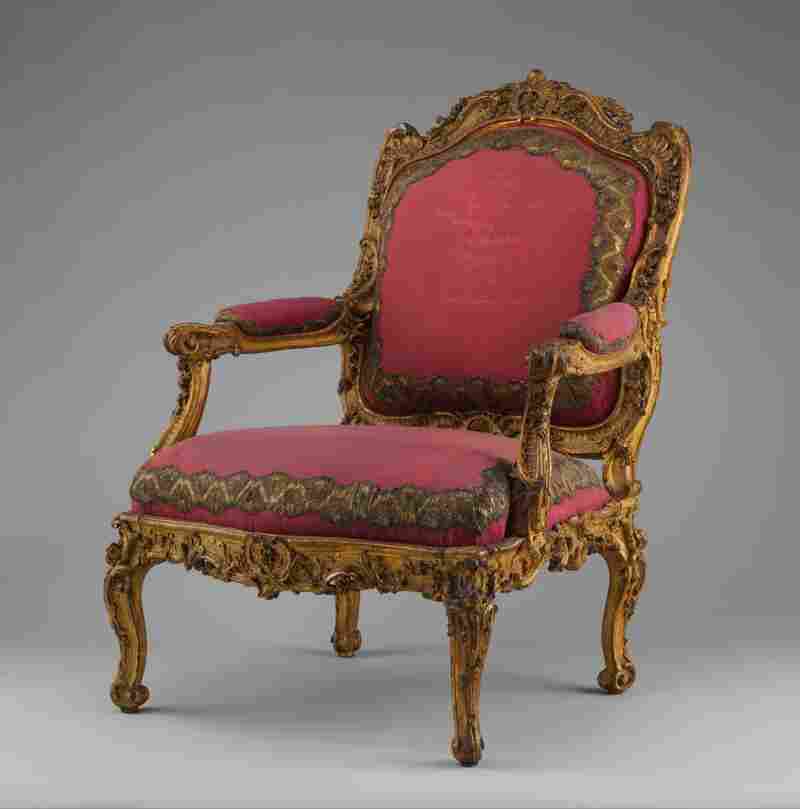 An 18th century armchair made for Louise-Élisabeth, the Duchess of Parma, is the inspiration for one of the intersecting tales in Metropolitan Stories. The Metropolitan Museum of Art hide caption 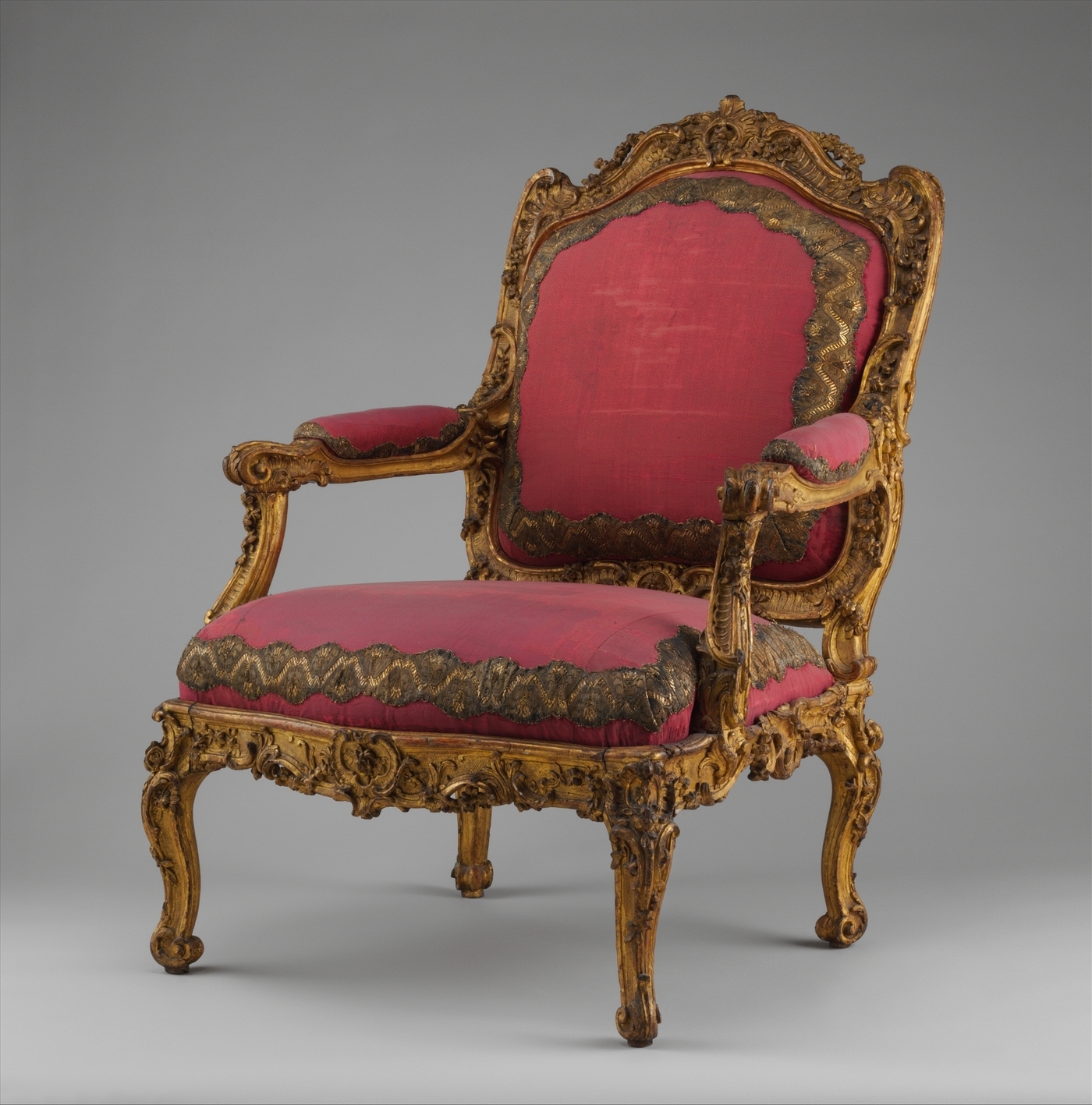 An 18th century armchair made for Louise-Élisabeth, the Duchess of Parma, is the inspiration for one of the intersecting tales in Metropolitan Stories.

The Metropolitan Museum of Art

For example, the second chapter is told from the perspective of an 18th century French chair — a fauteuil made for European royalty.

"To me it looks different than the others," Coulson says. "It's got pink, saturated pink velvet and gilded trimming and wildly curvaceous legs. ... It just has some juice, this chair! But the thing about this chair that's different from every other chair in this room is that this chair has its original upholstery. And so that's incredibly rare. That fabric is the fabric that was dented when an 18th century butt sat in it."

The chair, of course, hasn't been used as a chair for over 200 years. ("And no one will ever sit in that chair again," Coulson says. "They're not allowed to!") Coulson imagines that it must long to be sat upon by someone, anyone — even a toddler escaping past the barriers and heading toward its velvet lining.

"Come on little guy! I thought from behind the gallery ropes. You can make it!

"The boy's plump hands extended forward, propelled by his thick, tumbling waddle, his shoes clomping on the gallery floor. I felt like I was hanging from a cliff waiting for him to grip my arm and save me. Then a breeze of moist heat floated past as his mother grabbed him at the very last second — just before he reached me."

"I do wonder: This chair lived a certain life," Coulson says. "And then: Do we kill it a little bit when we put it into this exquisite retirement home?"

So yes, Metropolitan Stories does have a certain surrealist bent to it. 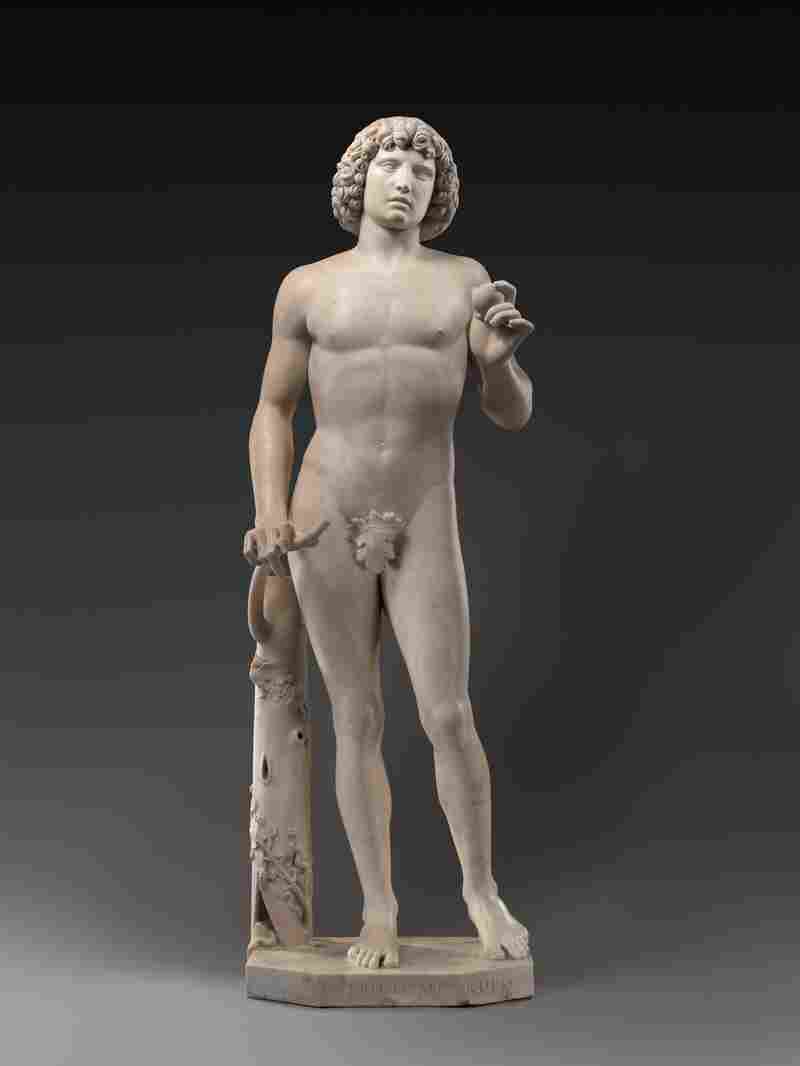 This sculpture of Adam, made by Tullio Lombardo in the late 15th century, fell and broke into several pieces when its pedestal collapsed in 2002. It has since been completely restored. The Metropolitan Museum of Art hide caption 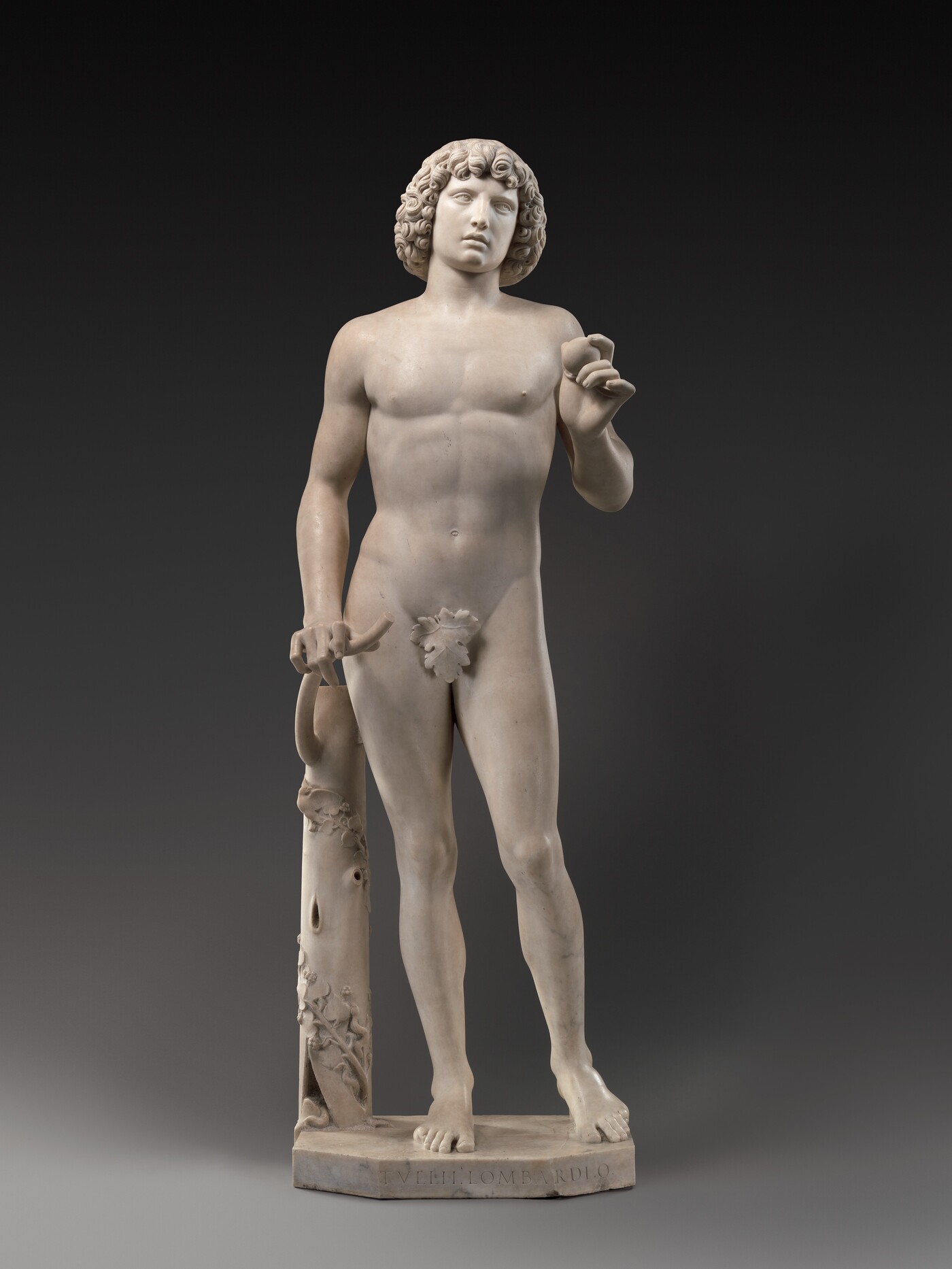 This sculpture of Adam, made by Tullio Lombardo in the late 15th century, fell and broke into several pieces when its pedestal collapsed in 2002. It has since been completely restored.

The Metropolitan Museum of Art

Coulson shows us a sculpture of Adam, of biblical fame. He's holding an apple, a fig leaf covering his private parts.

"One of the great tragedies of my time at the Metropolitan Museum was in 2002, when this sculpture fell off its pedestal and was smashed into thousands of pieces," she says. "You would never know that now. ... He has been conserved over a period of 11 years and he is back to his original grace.

"But I have to admit — in that moment in 2002, after we were getting over the trauma of losing a work of art — my other thought was: What did it feel like when the sculpture was in the air? ... This is a sculpture that's been standing in place for 500 years, and so there's this moment of airborne release before it hits the ground. But what did that moment feel like for this thing that by definition is never supposed to move?"

The question raised in the book: After five centuries, what would prompt Adam to seek the freedom of movement?

How to visit a museum

Metropolitan Stories is a relatively slim book, and the Metropolitan Museum of Art enormous. So there's some curation here with the works and places featured in the novel.

"I write about the objects that I love and that speak to me and that do really provide kind of a comfort to me — and have always been part of my walking through the museum," Coulson says. "These are the places where I stop."

Coulson admits it's an idiosyncratic collection of items.

"I don't think any of these objects are on anyone's greatest hits list," she says. "But maybe now they will be."

In any event, Coulson encourages any visitor to the Met — or any overwhelming museum — to prize quality, or at least a specific personal experience, over quantity.

"I think the best advice I can give anyone in any museum is to simply walk around until a particular work of art stops you in your tracks," she says. "And then once that happens, just wait. Just spend time with it.

"And I'm talking about 15 minutes. It's a tremendous amount of time to spend with a work of art. Most people spend about 30 seconds looking at something. Look at every corner, every edge. Ask yourself why the artist made the choices that they did. And that's when your imagination will take flight; that's when the magic really happens. And then, walk out of the museum."

In other words: Don't feel guilty about not seeing it all.

"It's so satisfying to have that one rich encounter with an object that that'll sustain you," Coulson says. "There's no reason to 'conquer' these places, and I feel like that's what people are usually trying to do. I say, relax and enjoy yourself. And then leave! The most important thing is to not stay so long — because it's exhausting!"

Jolie Myers edited this story for broadcast. Patrick Jarenwattananon adapted it for the Web.