Accessibility links
Chicago Teachers Will Go On Strike For the second time in seven years, Chicago Public Schools teachers will be on strike starting Thursday, walking out of class, they say, in the name of better schools. 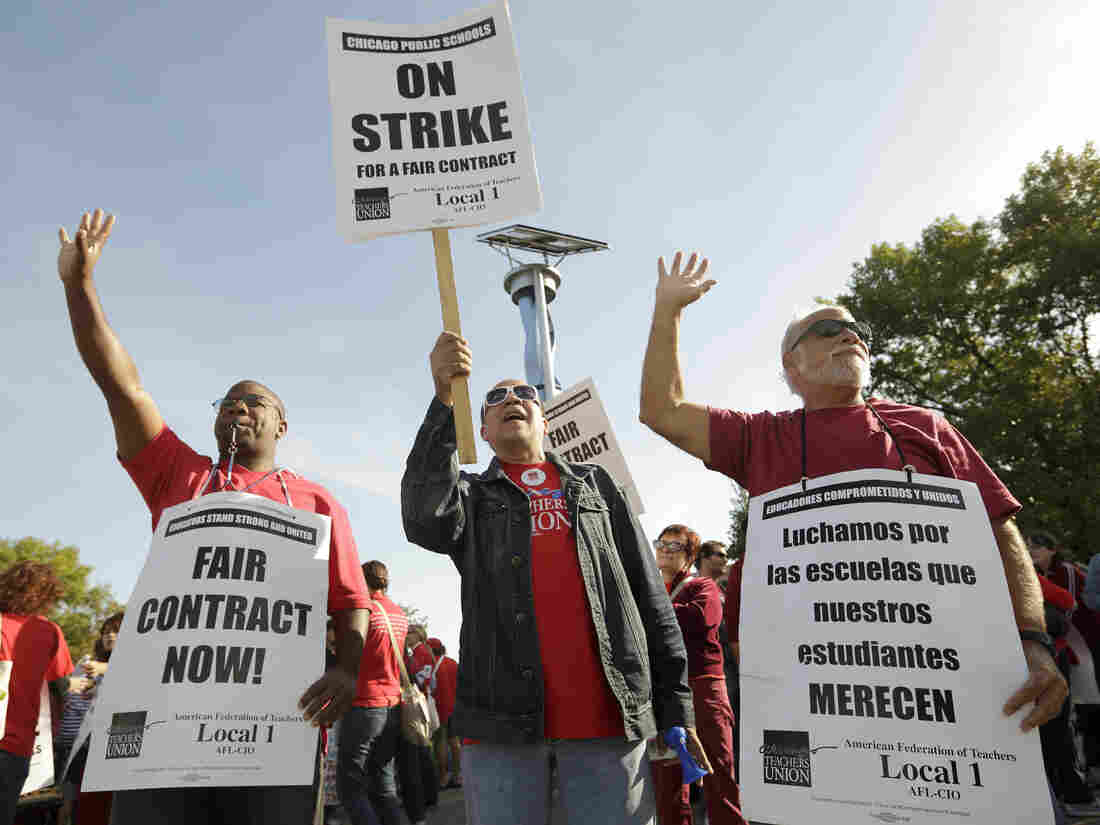 Teacher in Chicago have announced that they will go on strike. John Gress/Corbis via Getty Images hide caption 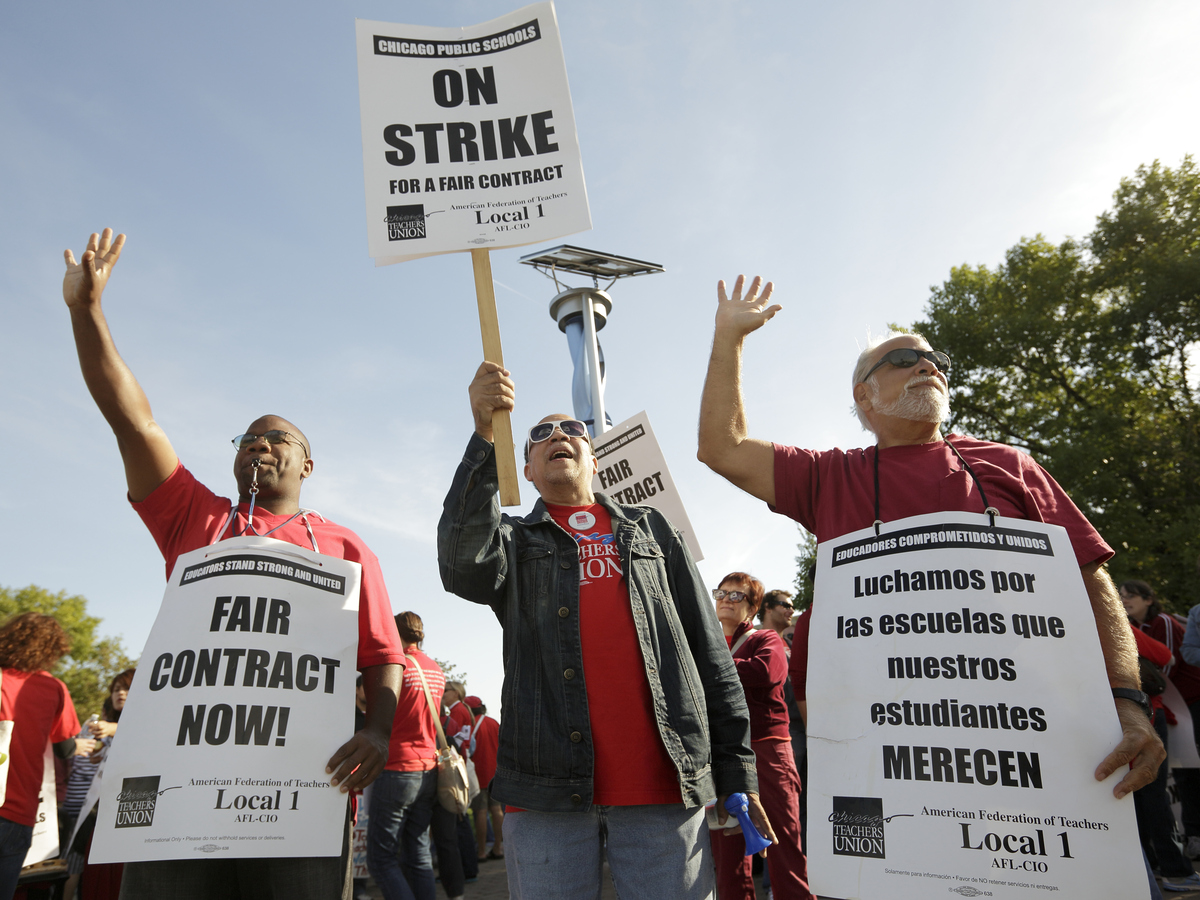 Teacher in Chicago have announced that they will go on strike.

For the second time in seven years, Chicago Public Schools teachers will be on strike starting Thursday, walking out of class, they say, in the name of better schools.

Gathered on the stage of the union hall on Wednesday, the Chicago Teachers Union said its delegates were in full support of moving forward with a strike. Delegates had already authorized the walkout and set a date so it would have taken a reversal to cancel the strike.

"We have not achieved what we need to bring justice and high quality schools to the children and teachers of Chicago," said CTU President Jesse Sharkey. "We need to have the tools we need to do the job at our schools. We need pay and benefits that will give us dignity and respect. We are on strike until we can do better."

Altogether, more than 30,000 workers will be on the picket lines. This includes 7,500 teacher aides, custodians and security guards who are members of SEIU Local 73. SEIU said Wednesday evening it had rejected CPS' contract offer and planned to strike on Thursday along with CTU.

Officials say schools will be open, with principals and other administrators supervising any children that need a place to go. They also are telling parents they can bring their children to libraries and some community organizations.

The two sides say they will be back at the negotiating table on Thursday, and will work toward reaching a deal.

Lightfoot announced Wednesday morning that she was cancelling school Thursday in anticipation of the strike. She said she expected the strike, painting it as a strike of choice. She said there has been some progress at the bargaining table, saying "At every turn, we bent over backwards to meet the unions' needs."

"I was disappointed by the CTU's decision to begin a work stoppage and force the cancellation of classes because I feel like we rolled up our sleeves and negotiated in good faith over a long period of time," she added Wednesday evening. "We offered a historic package on CTU's core issues of compensation, staffing and class size."

The union has yet to accept the school district's salary and benefits offer, but the bargaining team has not been voicing major objections to the mayor's proposal for teachers, which would provide 16% raises over five years and only minimally increase health care contributions.

When it comes to salary, it has focused on getting more money for veteran teachers and for office clerks and teacher aides, known as PSRPs.

However, the union's most contentious asks have to do with creating better working environments for teachers and learning conditions for students.

The union sees this as a moment to win battles it has been fighting for years.

Since the current leadership took over the CTU in 2009, it has been pushing a focus on social justice issues, moving far beyond the traditional union bread and butter concerns. The idea of using teacher contracts to push for so-called "common good" issues has taken hold around the country.

In 2012, the union published a manifesto called the Schools Students Deserve that detailed the need for lower class sizes and more staff, such as librarians, social workers and counselors.

In the last two contract fights, the union brought up these issues, but they also had to concentrate on protecting their members whose jobs were being threatened by school closings and the opening of charter schools. The school district also had a budget deficit that made it difficult to argue for more resources.

This year, they saw an opening to try to win big on these social justice issues. The school district has more money after a change in the state's funding formula and Lightfoot has said she believes schools need additional resources. The union also feels compelled to push these demands after years of budget cuts that led to staff losses in schools .

Many teachers say conditions in schools are unacceptable.

Lightfoot and her team have maintained they are committed to adding 250 more nurses, 200 social workers and more special education case managers to schools. But they say putting these promises in the contract would limit their flexibility.

For months, Lightfoot resisted putting enforceable class size caps, lowering class size limits and putting promises for more staff in the contract. She also has pointed out state law prohibits teachers from striking on issues outside of pay and benefits.

Then, in recent days, the union offered up a compromise. They said lower class size and increased staffing could apply to the neediest schools first.

And just Monday, Lightfoot changed her position and signaled she was willing to write into the contract some commitments on class size and staffing.

But the union maintains that, even this week, the offers being made by the school district don't do enough to address their demands. They say they still want a nurse, librarian and a social worker in every school. They also want to lower counselor caseloads.

The union and school district say some tentative agreements have been reached, but many outstanding issues remain.

The union handed the school district 83 pages of demands on January 15. But talks did not begin in earnest until after Lightfoot took office in May.

The union's contract expired on June 30.