Accessibility links
Review: 'The Lighthouse' Is A Gorgeous Maritime Nightmare An old salt (Willem Dafoe) and his young assistant (Robert Pattinson) descend into a surreal maelstrom of myth and madness as they maintain a lonely lighthouse. 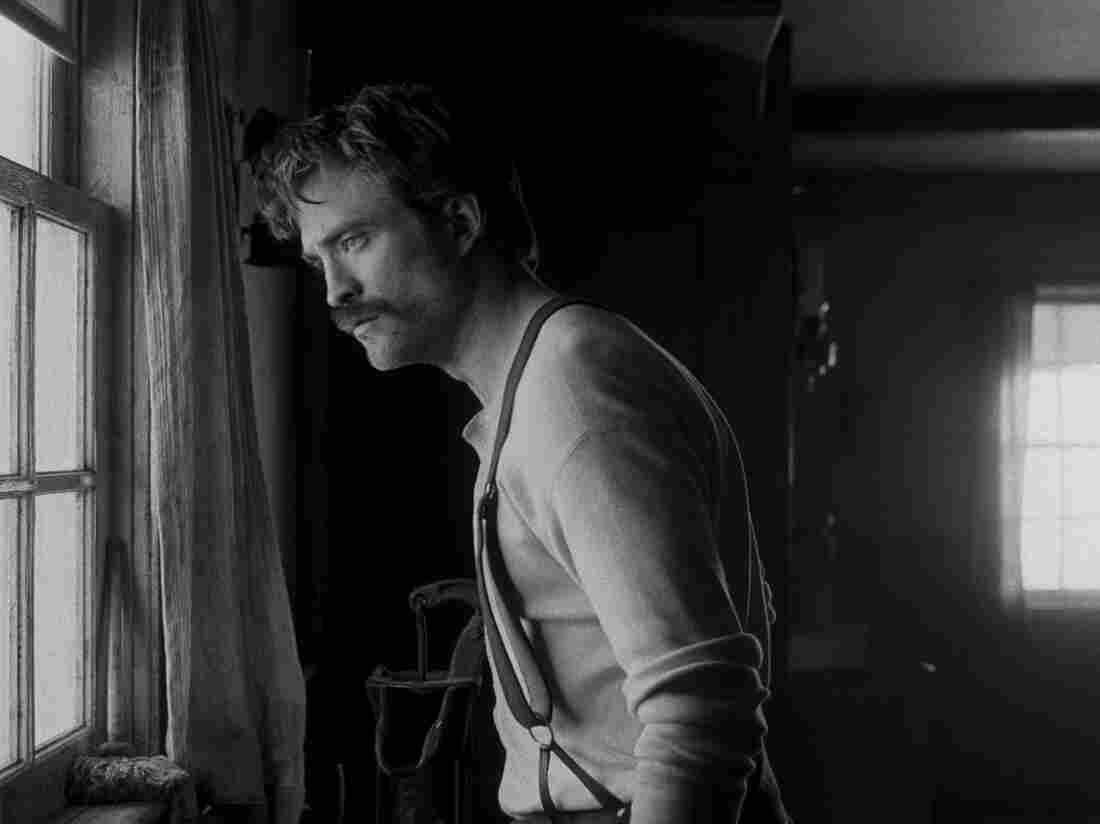 Dread, And Loving It: Robert Pattinson stars in Robert Eggers' The Lighthouse. A24 hide caption 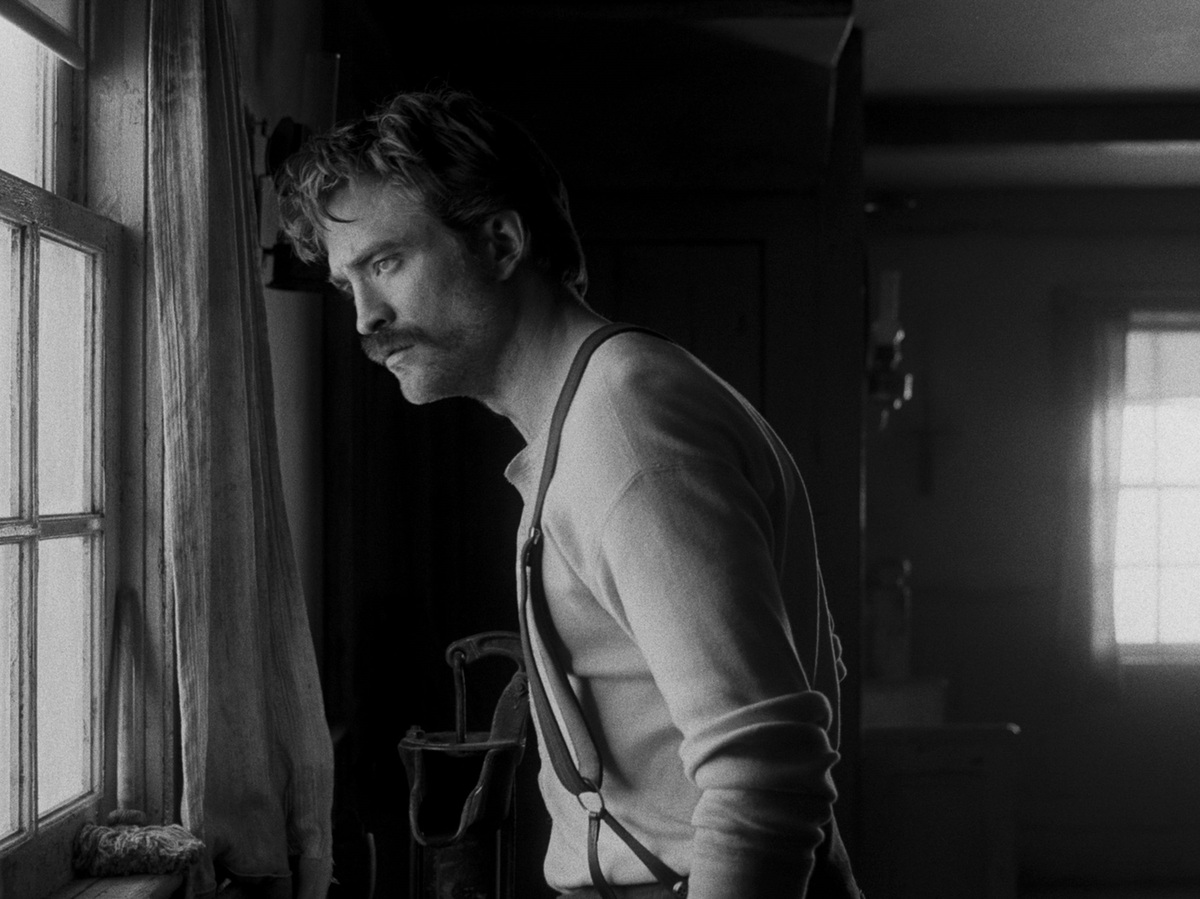 Dread, And Loving It: Robert Pattinson stars in Robert Eggers' The Lighthouse.

Has abject misery ever been such fun to watch?

Has soul-sick dread ever looked so gorgeous?

As depicted in Robert Eggers' hauntingly hilarious new film, the life of two keepers who maintain a remote lighthouse — time and place unspecified, but most likely the late 1800s, off the New England coast — is one of ceaseless, back-breaking toil.

For one of them, anyway: Robert Pattinson's glum Ephraim Winslow is brand-new to the keeping game, while Willem Dafoe's old salt Thomas Wake, as a veteran head keeper, lands the cushier gig: the night shift, which he spends sealed off at the top of the tower, tending the light.

Ephraim, as a lowly apprentice, is stuck with the grunt work of daytime: lugging barrels of fuel, hauling rocks, cleaning the filthy cistern, defending himself from attacks by the island's aggressive gulls. Even more unpleasant, arguably: For the duration of their month-long assignment, the laconic Ephraim has to put up with the voluble Thomas' harsh reprimands, his rambling tales of mermaids and sea-monsters, his terrible cooking, his drinking, his cackling, his farting — his whole noxious, crusty essence.

A Banished Family Fights Its Demons In A Puritanical Age

Most galling to Ephraim are Thomas' constant reminders that Ephraim is not fit to be allowed up to see the light itself, even in daytime: Thomas keeps the trap door to the light room locked and sleeps with the key.

It all starts to get to Ephraim, of course. He starts to dream (or does he?) of Thomas' feral mermaids, and to experience visions (or are they?) of just what Thomas is up to, there at the top of the tower.

As Thomas, Dafoe sinks his teeth into both Thomas' clay pipe, and the scenery: He hurls himself into the character's logorrheic monologues, punctuated by "ye"s, "thee"s, and, yes, the occasional "arr"s. (In his sailor's cap and bushy beard, he looks uncannily like one of Van Gogh's paintings of postman Joseph Roulin.) But it's Pattinson who takes the bigger swing here, actually, as Ephraim's sullen affect grows increasingly agitated, then outraged, then ... something else. As the film goes on, a toxic blend of rage, longing, guilt, alcohol, hunger, storms and (shudder) sea shanties causes Ephraim's reality to grow feathery at the edges — and Pattinson's performance grows larger and larger to keep up.

Both performances are of the kind that could cause the film around them to come unmoored, but Eggers' control is complete. Early on, he makes use of a vertical tracking shot that begins on the floor of the lighthouse, where Ephraim struggles with fuel barrels as he gazes longingly upwards, and rises up the spiral staircase, past the locked trap door, to the very top of the tower — granting us the access so cruelly denied to Ephraim. What we see there isn't clear to us, yet — but it's the kind of deft filmmaking moment that causes you to lean forward in your seat, goggling.

Shot in 35mm black-and-white by Jarin Blaschke, The Lighthouse's cinematography — its use of washed-out grays and impenetrable shadows — caused involuntary grunts of appreciation in the screening I attended. Blaschke did the cinematography on Eggers' previous film, The Witch; his use of natural light to underscore mood — to leach life and hope from the world of the story — is masterful.

Blaschke wasn't the only thing Eggers carried over from that film. He's a filmmaker fascinated with the place where hardship meets hallucination, where the punishments of the natural world intersect the world of the mind. He also knows that for viewers to follow him where he's going, he needs to anchor us in strong, clarifying performances. The Witch pivoted around an unforgettable scene in which the young, terrific Harvey Scrimshaw, as Caleb, is possessed, and it kept us firmly rooted in Anya Taylor-Joy's watchful gaze as Thomasin.

Here, Dafoe and Pattinson stay perfectly matched, constantly modulating their respective performances in cycles of discord and harmony. (That said, yes: If you close your eyes, their accents — Dafoe's Yankee sailor, Pattinson's broad Bostonian — might make you think that The Simpsons' Sea Captain is arguing with Mayor Quimby, but put that away.) (And what are you closing your eyes for, anyway? Have I mentioned how great this film looks?)

The world of The Lighthouse is harsh, austere, forbidding and cruel. But — I swear, by Poseidon's beard — I can't wait to go back.