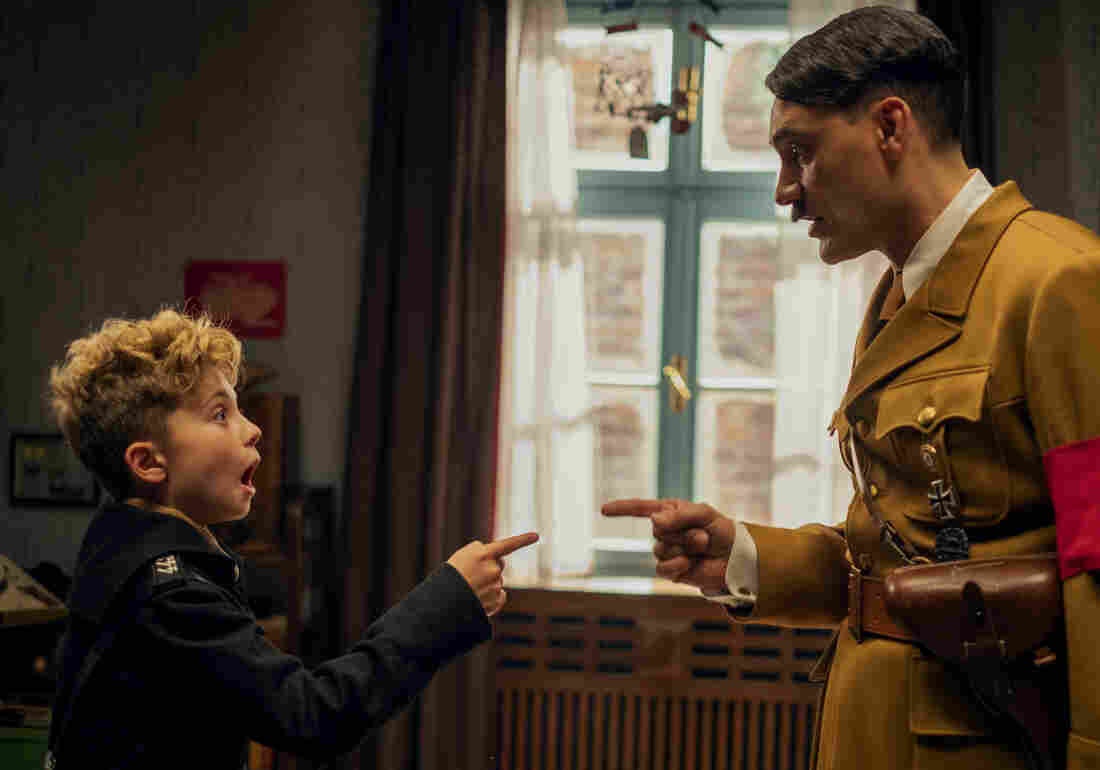 Taika Waititi may be best known for directing the Marvel blockbuster Thor: Ragnarok, but what got him that job was smaller movies like Boy and Hunt for the Wilderpeople — films best described as "quirky."

That epithet fits his latest film, Jojo Rabbit, about a little boy in Nazi Germany who has an imaginary friend named Adolf Hitler.

How quirky is it? Consider: When the film begins, a drumroll kicks off the familiar 20th Century Fox opening fanfare, and you'll think — for about one second — that all's normal. But as the Fox searchlights sweep the sky, the drums and horns turn into what sounds like a German drinking song, sung by children.

Shortly after, we see images of Nazi soldiers saluting the Führer as the Beatles sing "Komm Gib Mir Deine Hand."

We're in 1944 Berlin, where 10-year-old Jojo (Roman Griffin Davis) is having a rough first day of Nazi Summer Camp, and being consoled by an imaginary friend whose toothbrush moustache and swastika'd uniform clearly identify him — though this is a much cheerier, chummier Adolf Hitler than the one you'd recognize from newsreels.

As played by writer-director Taika Waititi, this imaginary Führer is a nice guy — which makes sense, as he's a figment of the imagination of a nice 10-year-old.

As setups go, Jojo Rabbit's treatment of history's most reviled mass murderer qualifies as ... unusual ... though hardly unprecedented: Charlie Chaplin played a Hitler-like Adenoid Hynkel in The Great Dictator, when the real Hitler was still around. Mel Brooks mocked him after World War II in The Producers, Quentin Tarantino created a revenge fantasy in Inglorious Basterds. So Waititi's not treading new ground here, just offering a new take.

His comic idea is much like Chaplin's: to deconstruct fascist thinking. He makes little Jojo a propaganda-fed child so innocent that he's never learned to tie his shoes, then helps him to puzzle out the dense network of lies that surrounds him.

Assisting with both the shoelaces and the life-lessons is his mom, played by Scarlett Johansson. Also on hand is Sam Rockwell as Jojo's camp counselor, who's aware that the Nazi jig is up, but plans to dance it away.

And there's a Jewish girl hiding in the attic, played by Thomasin McKensie, who not-so-gently challenges the notions he's built his young life on. "You're not a Nazi, Jojo," she says, "you're a 10-year-old kid who likes dressing up in a funny uniform and wants to be part of a club."

Jojo Rabbit is gently comic for a while, and then surprisingly affecting at the end, so perhaps it's not fair to wish that Waititi had opted to deal more directly with the horrors of the Third Reich. We are, after all, living in a time when fascism is again a growing threat.

Not what he was going for, though — he's content to sidestep the atrocities, concentrate on the indoctrination of children, and let his young hero — and by proxy, the audience — learn life lessons that get tied up, like a child's shoelace, with a neat little bow.