Accessibility links
Review: 'By The Grace of God' Is Intimate And Powerful A director known for lurid psychodrama tackles a French priest-abuse scandal with sensitivity, restraint — and a robust sense of urgency. 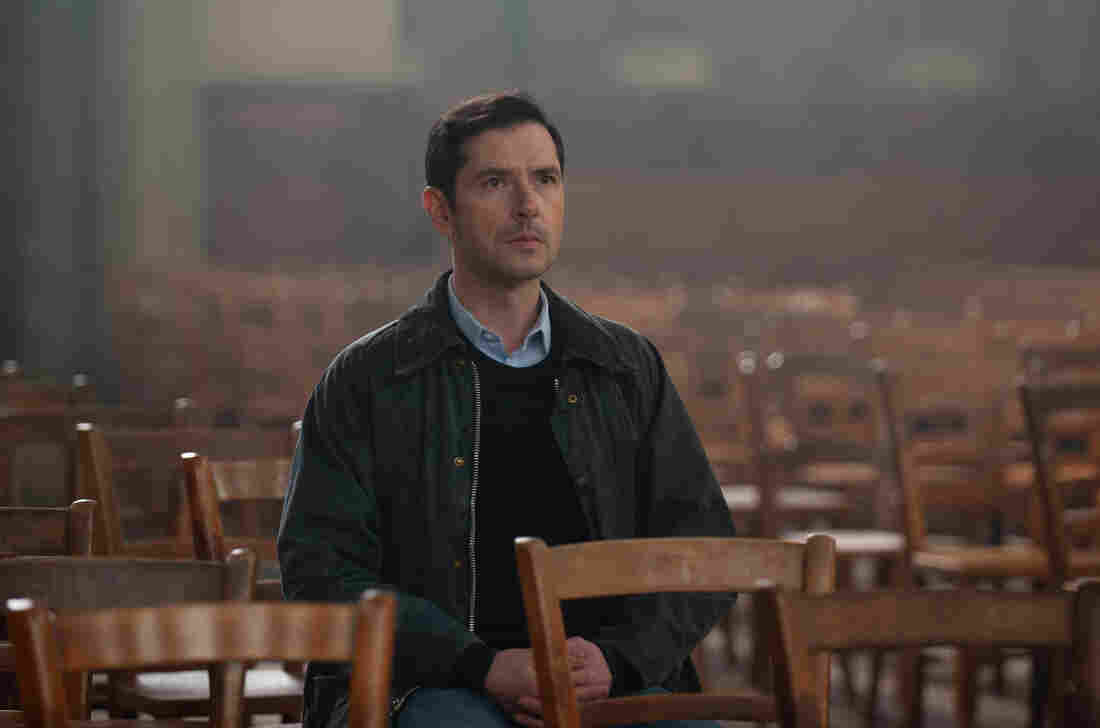 Melvil Poupaud portrays one of the three men speaking out against their childhood priest in François Ozon's By The Grace of God. Music Box Films hide caption 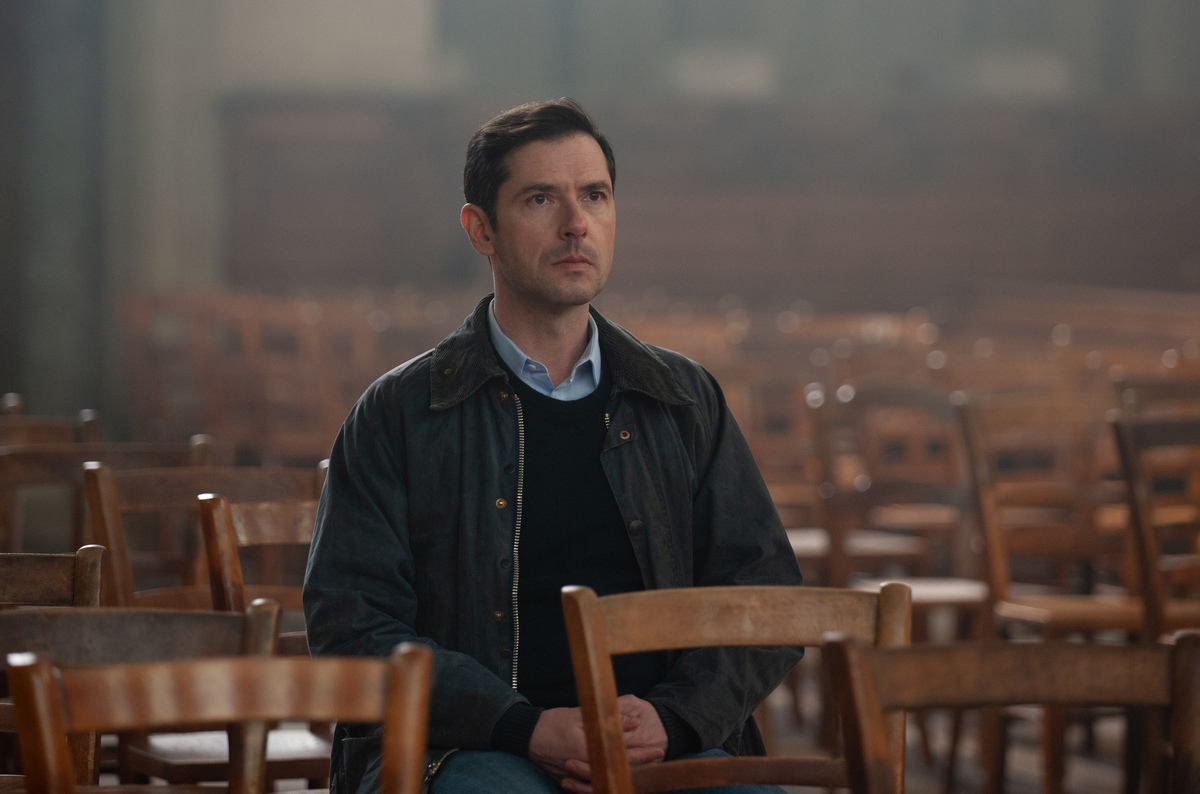 Melvil Poupaud portrays one of the three men speaking out against their childhood priest in François Ozon's By The Grace of God.

In the opening scenes of the new French drama By The Grace Of God, we see a Catholic family man named Alexandre (Melvil Poupaud) taking his wife and five kids to church. He's happy, excited to share his faith with his family. In voiceover, though, we hear him say he'd been molested repeatedly by his priest thirty years prior. What's more, he's recently learned the priest has returned to the area, and is again in close contact with children.

This is something new in our growing canon of films about institutionalized sexual abuse: a survivor who isn't being filtered through the lens of some neutral character, and who's able to live a well-adjusted life many years after the fact, despite living in an environment filled with the trauma of that time. Later in the movie, we'll meet other men who had been abused by the same priest, and they haven't always fared as well. They've suffered deep emotional scars, and they want some kind of retribution. Finding it won't be easy.

By The Grace Of God, which won the Silver Bear at this year's Berlin Film Festival, is based on the still-unfolding story of a priest in Lyon who abused children with impunity for decades, and the Cardinal who covered up the allegations and failed to take action against him. After Father Bernard Preynat's victims began mobilizing in the mid-2010s, they brought enough attention to the case to lead to Preynat's indictment in 2016 and official defrocking earlier this year; he'll face trial in 2020. Cardinal Philippe Barbarin, meanwhile, was sentenced to six months in prison this year for failing to alert authorities.

The film structures these events around three grown men, each of whom hands the narrative off as they gain the courage to speak out. In a smart decision, none is portrayed as the lone hero, and even Alexandre, the one who gets the ball rolling, tells us he was inspired to act when another father reached out. That spark is never actually seen, only alluded to, which keeps the film from falling into easy narrative traps; maybe a spark is not one fateful occurrence, but the slow accumulation of resolve over time.

Since Alexandre is still himself a believer in the church, he attempts to resolve the matter internally, appealing directly to Barbarin (François Marthouret) to take action against Preynat (Bernard Verley). But this road only ends in humiliation: A church mediator has Alexandre hold hands with his abuser as together they pray for healing, and the priest walks away unpunished.

Alexandre's own case falls outside the criminal statute of limitations, but he suspects Preynat has preyed on others in more recent years. This leads him to François (Denis Ménochet), a Catholic-turned-atheist who quickly takes the reins of the operation, forming a survivor's group and delivering increasingly combative pronouncements to the church and the media. At one point he plots to hire a skywriter to draw a huge penis in the air above the Vatican, until the others can reel in his take-no-prisoners mentality. But justice still stalls until Emmanuel (Swann Arlaud) enters the picture; an emotionally stunted wreck, he's able to demonstrate that he's suffered real harm on account of Preynat's actions.

Since we're only talking about one priest and one (prolonged) cover-up, rather than hundreds, the film becomes a much smaller, more intimate account of systemic abuse than something like Spotlight or Pablo Larraín's The Club. But the immediacy of the story (the film was shot, with the permission of survivors, even before the verdicts could be delivered) gives it tremendous power. Imagine if All The President's Men came out before Nixon's resignation.

This is where writer-director François Ozon can show off his gift for economy of storytelling. The film moves at a rapid clip, covering the formation of a survivors' movement and the push-pull from within its ranks. We see glimpses of how these crusades are affecting their family lives, through little snippets of conversation here and there: with unsympathetic parents and siblings, or with partners conflicted from the experience of their own abuse. Many of these conflicts aren't resolved, though that could be because the speed of this movie's production simply didn't allow any time for these wounds to be healed in real life.

Ozon is mostly known in cinephile circles for his lurid, sexually explicit psychodramas — recently including Double Lover and The New Girlfriend, both of which featured female protagonists grappling with taboo desires they dared not speak out loud. This film has a near-total lack of female voices and skips any graphic recreations of the abuses themselves, making it the polar opposite of Ozon's usual fare. But the director (who says in the press notes that he once narrowly avoided a similar situation at the hands of a different priest) has always had a sympathetic eye for human dilemmas forged in suffering. Here he impressively juggles three protagonists with vastly different home lives whose only links to each other are their shared abuse. Over time, they're finally able to wrest power back over their situation, and even joke about it.

Despite that bitterly ironic title (which is translated literally from the French), the film allows a complex portrait of Catholicism to come through. Even by the end, with all that has happened to him, Alexandre really wants to be able to keep faith in his life. And Ozon doesn't judge him for it.