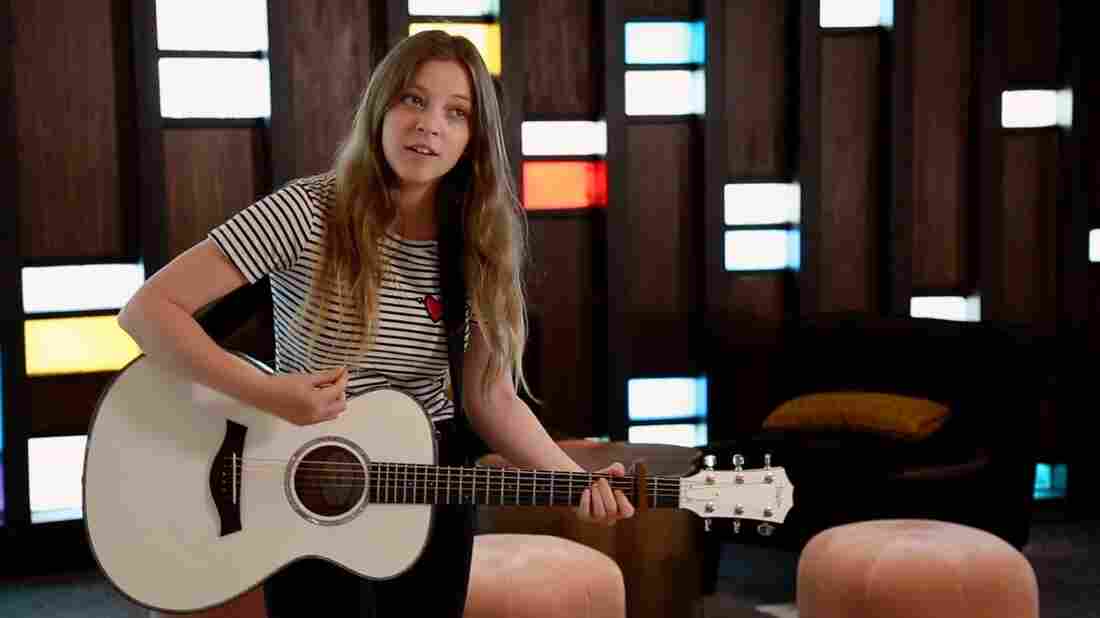 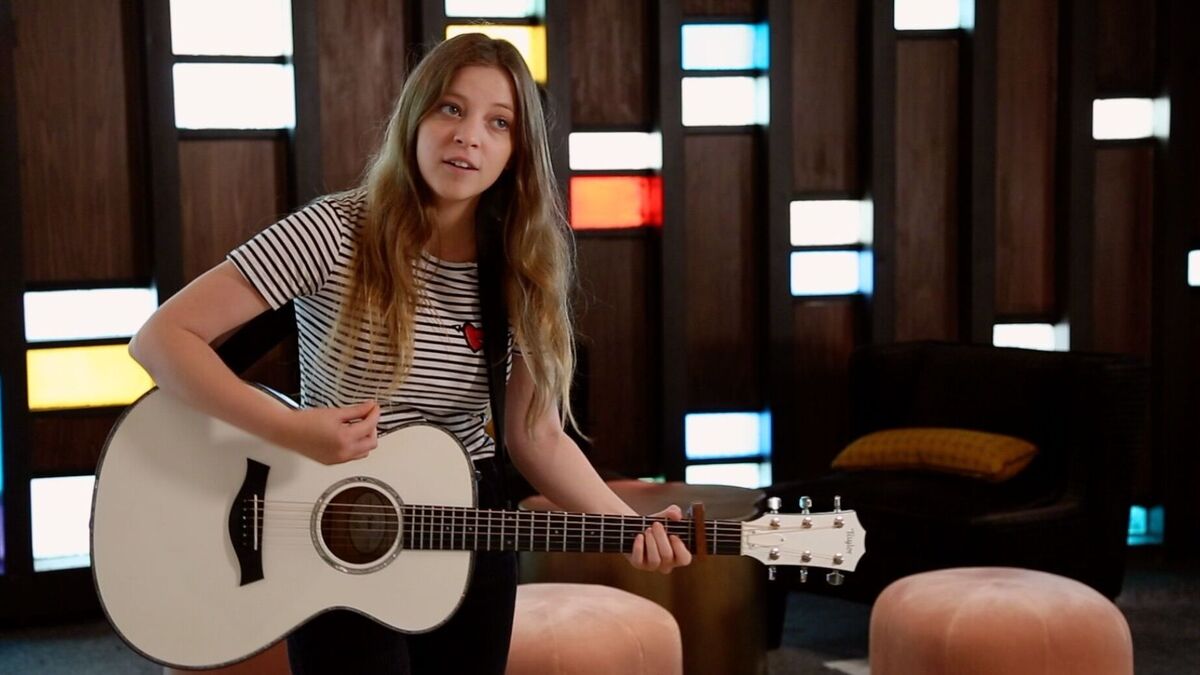 Jade Bird performs live for KXT's On the Road series.

North Texas is home to a slew of one-of-a-kind music venues, bars, hotels, record shops and beautiful outdoor settings. To showcase some of these landmarks, the On the Road series launched in 2011 as a partnership between KXT and KERA's local arts source, Art&Seek. The video series set out to capture North Texas bands as they perform outside the comfort of the KXT studios in locations around North Texas and Austin.

During its first year, the series won a W3 award, in recognition of its creative excellence on the web. Today, On the Road videos continue to feature intimate performances with local and national artists in visually unique locations. With more than 75 On the Road videos in the station's archive, it was tough to narrow it down. But here are 10 standouts.

There's no doubt about it: U.K. songwriter and vocalist Jade Bird is a rising star. Last year, just before her debut album hit the U.S. and U.K. charts, she performed her hit "Uh Huh" at the historic Statler Hotel in downtown Dallas.

The Statler Hotel opened in 1956, and in addition to being the first major hotel built in Dallas in more than 30 years, the hotel was also the first building to feature not only elevator music, but also the first 21" Westinghouse televisions, which could be found in each of the guest rooms and suites. Additionally, the décor included beautiful mid-century and electronic innovations.

Years of neglect and poor business closed the hotel in 2001, and it was nearly demolished in 2003. It sat vacant for years, but was saved from demolition when the National Trust named it for Historic Preservation as one of "America's Most Endangered Places" due to its representation of American mid-century design. After several attempts at redevelopment, it was restored to its mid-century modern glory, re-opening in 2017. The backdrop for this session was the Scout Restaurant, located in the hotel lobby. Before opening for the day, the staff allowed the On the Road crew to come in for the shoot. By the time filming was finished, the entire restaurant staff had stopped their dinner preparations to watch Jade Bird's powerful performance.

Check out a bonus performance of "Uh Huh" from Jade Bird — with her full band — in the KXT studio here.

In an interview, James Keogh (better known as Vance Joy) said he's killed time on tour by skateboarding. Upon hearing this, the On the Road crew jumped at the opportunity to film the musician at Alliance Action Park in Grand Prairie. The local skate park and extreme-sports venue is located in the parking lot of The Theater at Grand Prairie where Vance Joy would be playing that evening.

On a cool June afternoon back in 2018, it was raining when the crew arrived at the park and began setting up for the shoot. They knew they had a covered location, but hadn't considered how loud the rain would be on the park's large metal roof. You can hear a bit of the sound at the beginning of this video. Luckily, the rain stopped just as Vance Joy arrived. The musician respectfully declined the opportunity to hop on a board; after all, he had a show to do that night, and any injuries might lead to the cancellation of the rest of his tour. Luckily, a park regular was happy to do some gnarly tricks to set the scene early on.

Emily Haines and Jimmy Shaw of the band Metric (both also perform in Broken Social Scene) were kind enough to stop by Four Corners Brewery in Dallas on a cold and blustery March afternoon in 2019. The brewery wasn't far from the Southside Ballroom, where the Canadian band would be playing that night. The duo opted to play a song from Metric's newest studio album, Art of Doubt, for this session.

This shoot was a challenge — not only because the crew was in a tight space behind the taproom bar, but also because of the ambient sound from all of the brewing equipment. Typically, microphones are kept out of the shots for these sessions, but this time the crew asked Haines to hold onto hers so they could capture the cleanest audio possible.

Location: On stage at the Majestic Theater

The setting for this On the Road session was rare — a performance on stage instead of in the wild. Although the crew normally preferred an off-stage setting for their series, they knew they couldn't skip the chance to film a musical icon like Ben Folds. Known for his lyrical wit, impressive piano skills and distinct songwriting style, Folds and his band wowed everyone in the room during this soundcheck party performance in 2016. The session was filmed at the historic Majestic Theater in downtown Dallas.

With eight musicians on stage, this was a difficult performance to capture. The three-person crew was supplemented by GoPro cameras attached to music stands and the piano for cutaway shots. Upon close inspection, the crew is visible in a few of the shots.

Garrett Owen is a consummate artist, with lyricism beyond his years and an inimitable playing style that has him earning new fans all over the place. In April 2017, this session was filmed at Doug's Gym in downtown Dallas, just before Doug closed his doors for good after 55 years of operation. This place was old-school: no frills, no electronic equipment, just a classic gym, complete with a boxing ring. It was run by Doug Eidd, who had been helping sculpt bodies in the location since 1962.

While this location was a photographer's dream, the creaky floors, ringing phone (it couldn't be left off the hook) and some of the patrons who didn't want to break from their routine — or maybe wanted a cameo? — made for a bit of an audio challenge. Luckily, Garrett Owen's extraordinary voice and impressive playing style shone through in the mix and made for a spectacular performance.

On a cool fall day in October 2015, the team met up with Frank Turner for an acoustic performance of his song "Glorious You." Turner had just gotten some fresh ink on his arm, as seen from the bandages in this video. With eclectic décor and lots of seating, it's easy to see why The Truck Yard made a great backdrop for this session. Every day, food trucks from around the city roll into the yard and serve up their various specialties, alongside the venue's signature Philly cheese-steak sandwiches and craft cocktails. A few lucky patrons who were there early on a sunny weekday afternoon got to enjoy a surprise performance with their lunch. Check out a bonus track of "The Next Storm" here.

Song: "In the Walls of a Mausoleum"

Originally from Denton, Seryn is known for its stunning harmonies, impeccable timing and technical proficiency. The band met up with the crew in October 2015 at the Old Alton Bridge in Denton, a historic landmark dating back to 1884.

The bridge is also called Goatman's Bridge, and according to local lore, it's haunted by a pretty dark past and reports of spooky happenings over the years. This video was shot just before Halloween, but unfortunately, the crew didn't witness any paranormal activity while filming. Check out a bonus track of "The Fire" here.

Song: Come to My Party"

In 2013, the On the Road series crashed Record Store Day at Good Records to film Black Joe Lewis as he performed his song "Come to My Party." Good Records is not your traditional CD and vinyl store; its concert series, Live From the Astroturf, features an actual turf-covered stage in a corner of the store and was even the setting for a live Alice Cooper album released last year (Live From the Astroturf, Alice Cooper). Additionally, Good Records serves as a record label, owned by Tim DeLaughter of Tripping Daisy and The Polyphonic Spree. After 14 years, the store recently relocated a few miles away, but still holds all of its unique charm.

This shoot was a bit of a challenge because the On the Road crew set up in the middle of the crowd for this performance. But all things considered, it was a success, and the challenges only contributed to the scene's authenticity.

Back in June 2011, the On the Road crew was thrilled to meet up with Peter Bjorn and John to capture a couple of songs outside the back entrance of the Granada Theater in Dallas. The venue started as a classic movie house in 1946. In 1977, it was briefly converted to a music hall, then a theater again. In 2004, current owner Mike Schoder restored it and returned it to a concert hall. He and the team have been bringing live music to the people of North Texas ever since.

Peter and John performed out back, sans Bjorn. (Bjorn was touring with his wife and young child and needed some quality family time before that night's show.) Despite the blazing heat, the guys played "Second Chance" and "Dig a Little Deeper" — off their album Gimme Some — with both energy and humor, surprising the crew with some environmental folly. A couple of lucky fans got to sit in on the session, camera phones in hand. Watch "Second Chance" from the same shoot here.