Accessibility links
Gordon Sondland, EU Ambassador, And His Role In The Impeachment Inquiry Based on interviews with people who know Sondland, what emerges is a portrait of a man who was fixated on getting an ambassadorship in Europe — and was willing to do what it took to keep it. 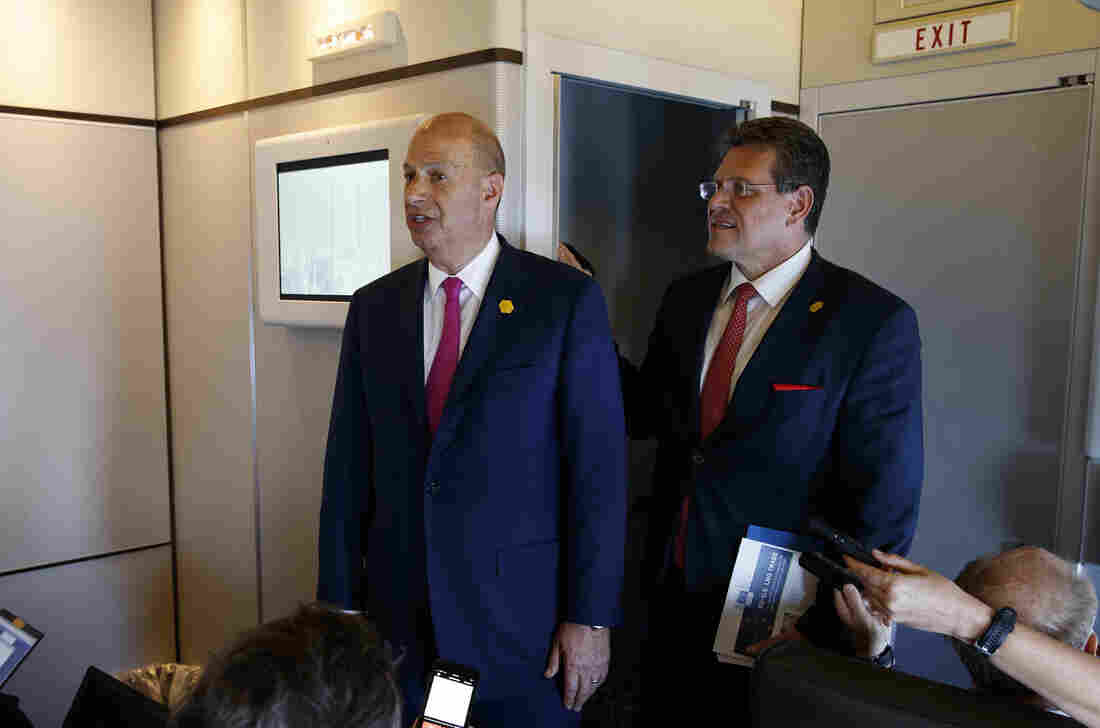 Gordon Sondland, U.S. ambassador to the European Union (left), and EU Vice President Maros Sefcovic speak with reporters about trade as they travel with President Trump on May 14. Evan Vucci/AP hide caption 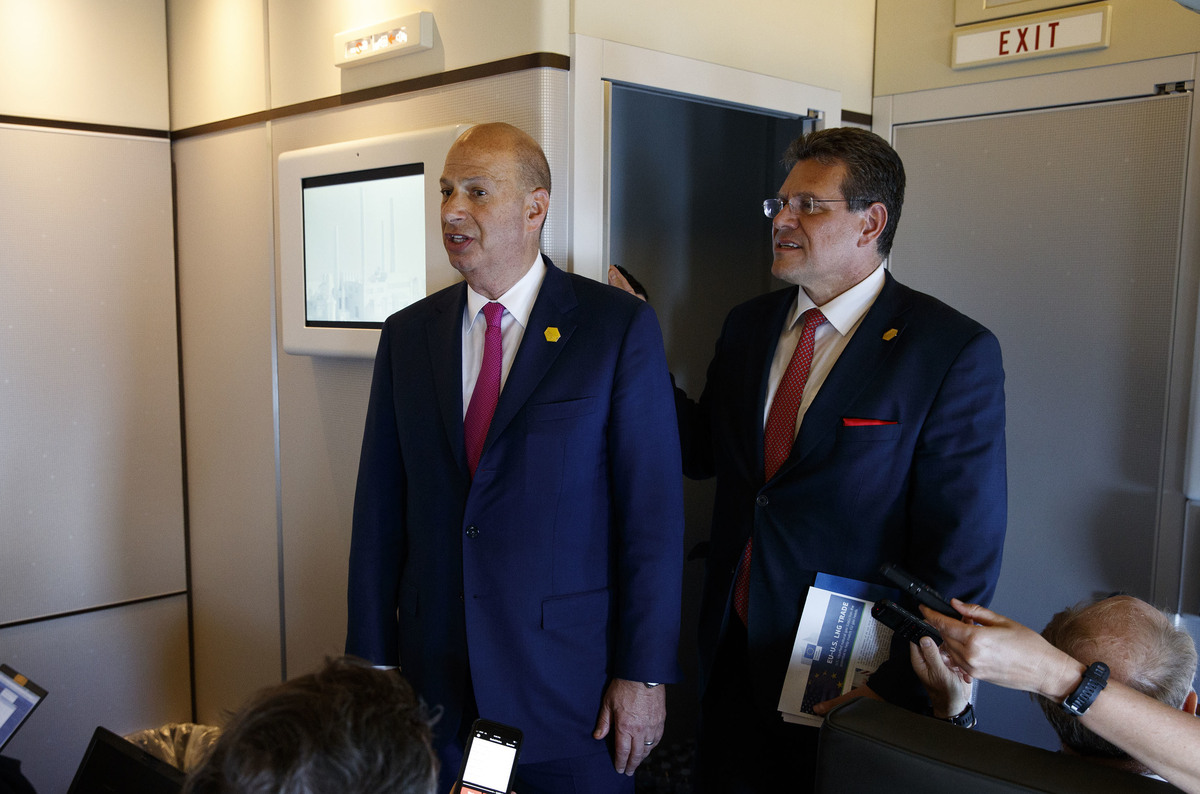 Gordon Sondland, U.S. ambassador to the European Union (left), and EU Vice President Maros Sefcovic speak with reporters about trade as they travel with President Trump on May 14.

As the U.S. ambassador to the European Union, Gordon Sondland has an important job, though it's not a position that makes someone a household name.

So how has he become a crucial player in the controversy that could jeopardize the Trump presidency?

What's elevated the businessman from Portland, Ore., into the public consciousness is something that wasn't an official part of his post. That role — an assignment that put him on the ground in Ukraine — is the reason he is testifying on Thursday morning as part of the impeachment inquiry into President Trump's effort to have political rival Joe Biden and his son investigated in Ukraine.

In an interview on Ukrainian TV the day after Trump's now-infamous call with Ukrainian President Volodymyr Zelenskiy, Sondland was asked why he's been spending time in Kyiv, Ukraine's capital.

"President Trump has not only honored me with the job of being the U.S. ambassador to the EU, but he's also given me other special assignments," Sondland said.

Details are emerging about Sondland's special assignments. Testimony this week in the impeachment inquiry revealed that acting White House chief of staff Mick Mulvaney pushed out the diplomats who had been in charge of Ukraine policy and put three other people at the helm.

"We have what are called the 'three amigos,' and the three amigos are [Energy] Secretary [Rick] Perry ... Ambassador [Kurt] Volker and myself, and we've been tasked with sort of overseeing the Ukraine-U.S. relationship between our contacts at the highest levels of the U.S. government and now the highest levels of the Ukrainian government," Sondland said in the interview on Ukrainian TV.

Also in the interview, Sondland said he spoke to Trump just a few minutes before Trump placed the call to Zelenskiy. 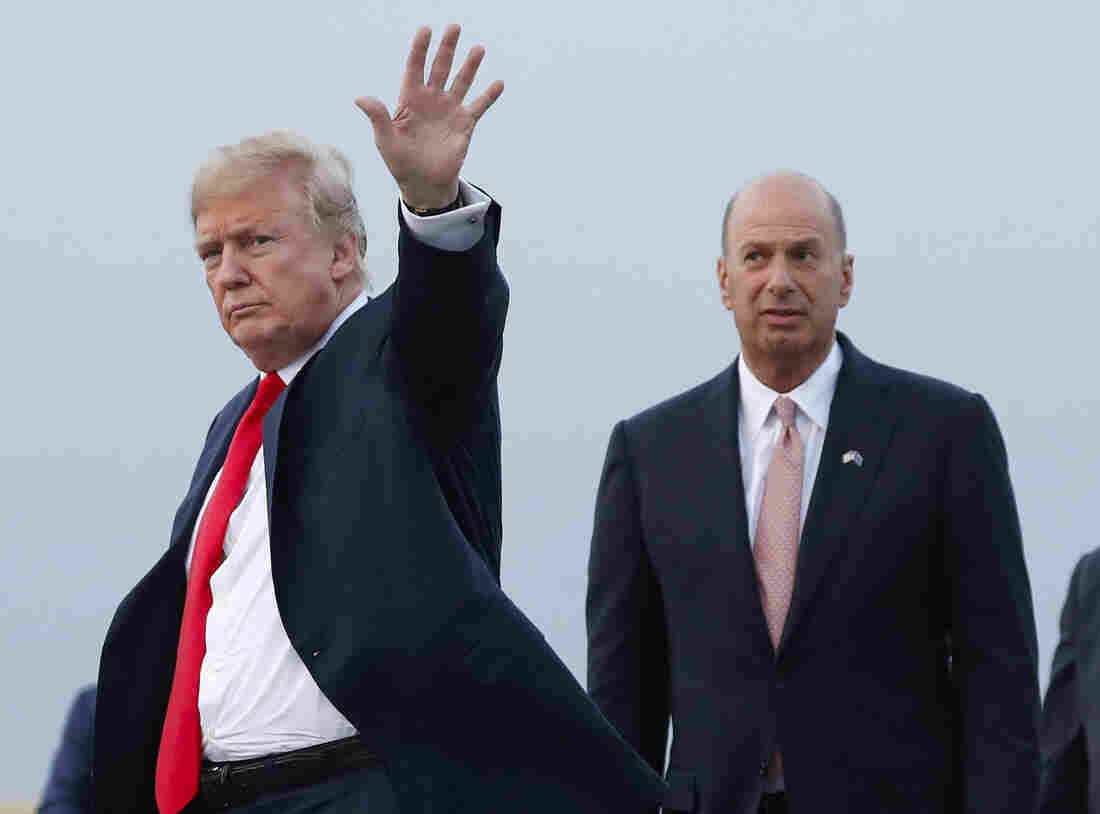 President Trump is joined by Gordon Sondland, the U.S. ambassador to the European Union, as he arrives at Melsbroek Air Base in Brussels in 2018. Pablo Martinez Monsivais/AP hide caption 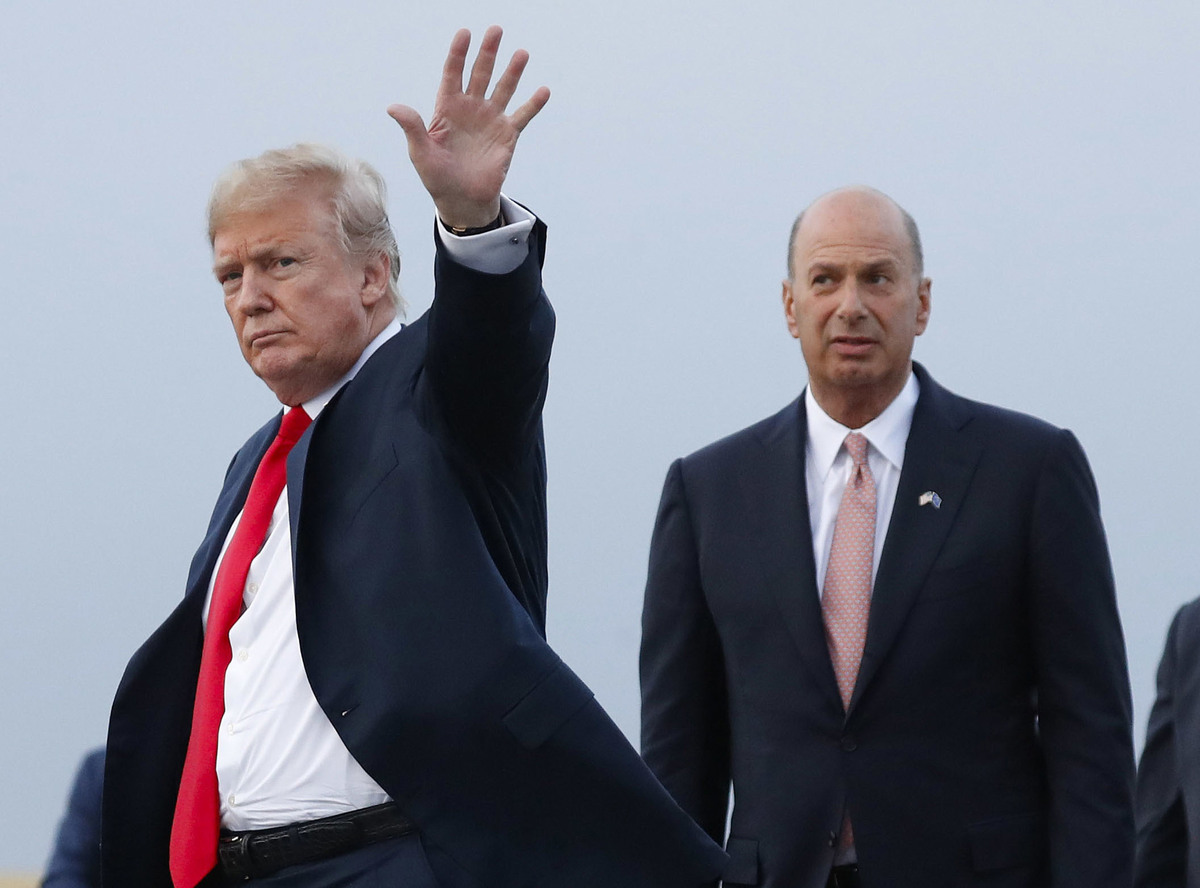 President Trump is joined by Gordon Sondland, the U.S. ambassador to the European Union, as he arrives at Melsbroek Air Base in Brussels in 2018.

The call on July 25 is at the heart of the impeachment inquiry.

According to a whistleblower complaint and a White House summary, the Ukrainian leader asked President Trump for military support and for an invitation to come to the White House. Trump responded by asking Zelenskiy to investigate two things: the origins of the Mueller probe and the Ukrainian connections of former Vice President Joe Biden and his son Hunter.

Looming large in the conversation, but never spoken, is the fact that the Trump administration had delayed close to $400 million in military aid for Ukraine. This is where the story turns to Sondland, and why he's testifying.

It started with a series of text messages.

About six weeks after the Trump-Zelenskiy call, Sondland received a text from Bill Taylor, the senior diplomat in the U.S. Embassy in Ukraine.

Taylor: "Are we now saying that security assistance and WH meeting are conditioned on investigations?"

Eight days later, on Sept. 9, Taylor repeats his concerns in another text to Sondland.

Taylor: "As I said on the phone, I think it's crazy to withhold security assistance for help with a political campaign."

Sondland: "Bill, I believe you are incorrect about President Trump's intentions. The President has been crystal clear no quid pro quo's of any kind."

He goes on to suggest that they stop texting and talk on the phone.

And that's why Sondland will walk into a hearing room on Capitol Hill on Thursday. The question at the center of this is whether President Trump used the promise of U.S. military aid, or the threat of its removal, to push the leader of Ukraine to dig up information on a leading political opponent. Was there a quid pro quo — and did Sondland help make it happen?

Based on interviews with people who know Sondland, what emerges is a portrait of a man who was fixated on getting an ambassadorship in Europe, would make a deal with whomever could make it happen, and — once in the job — would endear himself to those in power in order to keep it. (Sondland declined NPR's request for an interview.)

The phrase "quid pro quo" has become a kind of shorthand reference to the entire Ukraine debacle. But it is a phrase that Sondland uses himself to explain his negotiating philosophy.

In a 2016 interview with the Portland Business Journal, for example, he used it to describe how he facilitated phone calls between the former Democratic governor of Oregon and President George W. Bush.

"Transactional" and "pragmatic" were words that came up often when friends and former colleagues talked about Sondland.

As a hotel developer tight in GOP circles working in liberal Portland, Ore., Sondland had to figure out how to work with many people he didn't agree with.

David Nierenberg got to know Sondland when they both worked as fundraisers for Mitt Romney's presidential campaign in 2012.

"I collect books and wine bottles, and Gordon, among other things, collects relationships," Nierenberg tells NPR.

He and others say that back then, it was pretty clear Sondland wanted to hitch his wagon to a candidate who could make him an ambassador, preferably to a German-speaking country. Sondland's Jewish parents fled Germany during World War II. They ended up in Washington state and opened a dry cleaning business. It's a story Sondland has started telling a lot recently.

Nierenberg says Sondland saw an ambassadorship as a way to square the circle of his family's legacy, a kind of symbolic justice.

"It's not uncommon among the people I know who've come through this experience to want to have relationships to powerful people in government," Nierenberg says. "Because, let's face it, almost anyone who either personally survived or whose parents or grandparents survived the Holocaust did so because of the intervention of someone who helped them."

He says that might help explain why Sondland backed Trump. But that support was a process. Sondland supported Trump — and then he didn't, distancing himself after the then-candidate criticized the Gold Star Khan family.

Then Trump became the nominee, and Sondland went all in. He still had his eyes on the prize — a European ambassador post — and jobs like that often are doled out to top donors. He gave $1 million to Trump's inaugural committee, but made the donation quietly, through four separate entities.

Len Bergstein spent a decade working as a consultant for Sondland. He helped Sondland push back against a big convention center hotel in Portland. He also observed him as he made political alliances around the state.

Bergstein says Sondland is not an ideologue, but a political pragmatist who would ally with whomever could help him achieve his dream posting in Europe.

"Here was a chance, he'd tried to kind of ride the Romney horse into that position. He tried to be involved in the Jeb Bush campaign, and here was his ticket to the ball here, and I think with Trump he saw a chance to do it," Bergstein says.

"His story in his way"

When asked whether he thinks Sondland has a strong moral compass, Bergstein says it's a question he's been mulling.

"I've been thinking about that. I'm not sure I'm able to kind of answer that. He certainly never asked me to go over any lines," Bergstein says. "He was someone who wasn't looking to bend the rules necessarily, but was trying to bend the narrative, trying to make sure that he, if he could tell his story in his way, he would win."

Bergstein remembers that when the convention center hotel project he was working with Sondland to stop finally got resolved, Sondland got some property out of the deal — but it wasn't enough for him. Sondland wanted city leaders to draft a statement saying that he was a "pillar of the community." And they did.

"When I think back to that process — the closing of a very contentious battle in Portland — Gordon was first and foremost interested in his own reputation," Bergstein says. "Thursday is going to be, I think, that 'pillar of the community' kind of moment ... where he can define himself and the narrative so that in fact he doesn't get played as a bit-part villain being manipulated by some others."

Nierenberg, the Romney fundraiser, says he was in touch with Sondland by email a couple of weeks ago.

"I said to him, in so many words, 'Please remember that Richard Nixon did not lose the presidency because of the break-in at the DNC. Richard Nixon lost the presidency because of two years of lying about it and trying to cover it up.' And so my advice to Gordon was, if there's anything about which you feel with 20/20 hindsight uncomfortable, then by all means be truthful about it, be apologetic about it and make things right because you've got decades of life ahead of you," he says. "And the response I got was basically, 'Thank you for your email. You've always given me good advice.' "

Sondland's lawyers released a statement last Friday saying that the ambassador has at all times "acted with integrity and in the interests of the United States" and that he "has no agenda apart from answering the Committees' questions fully and truthfully."