Accessibility links
Elijah Cummings, Key Democrat In The Trump Investigations, Dies At 68 "He lived the American dream, and he wanted it for everyone else," House Speaker Nancy Pelosi said. The Baltimore congressman also helped to lead the impeachment inquiry into President Trump. 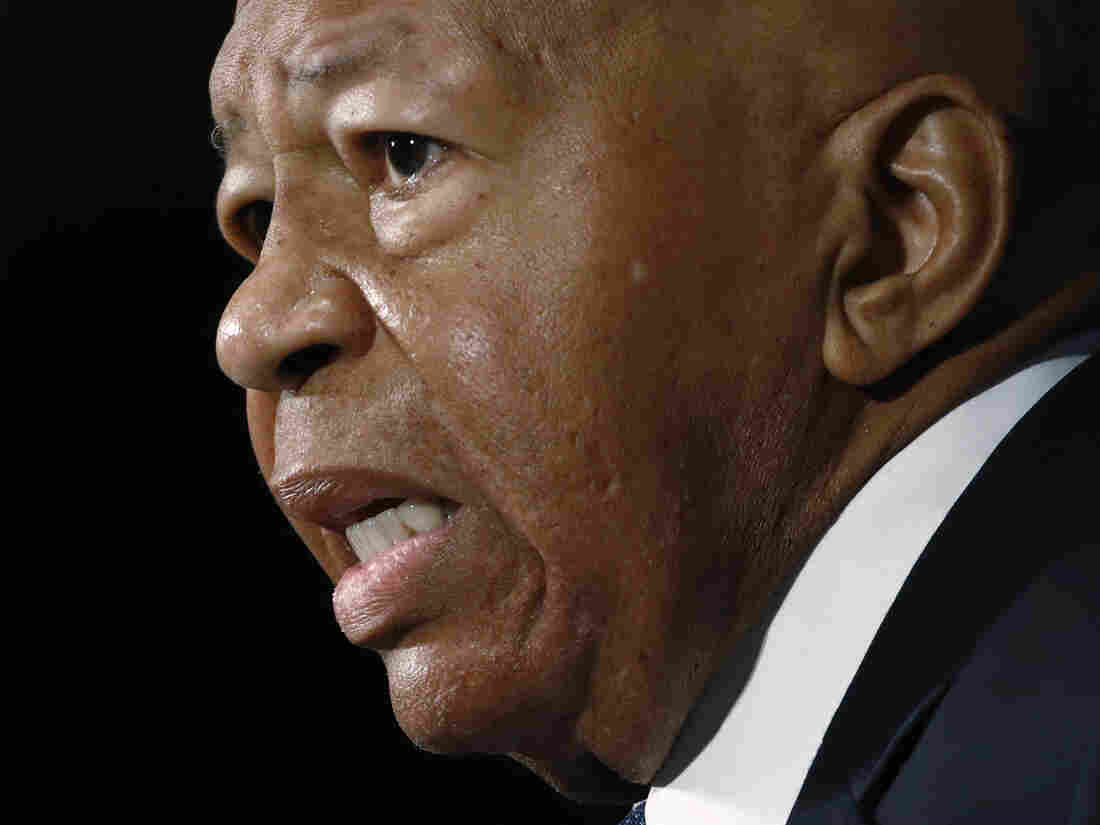 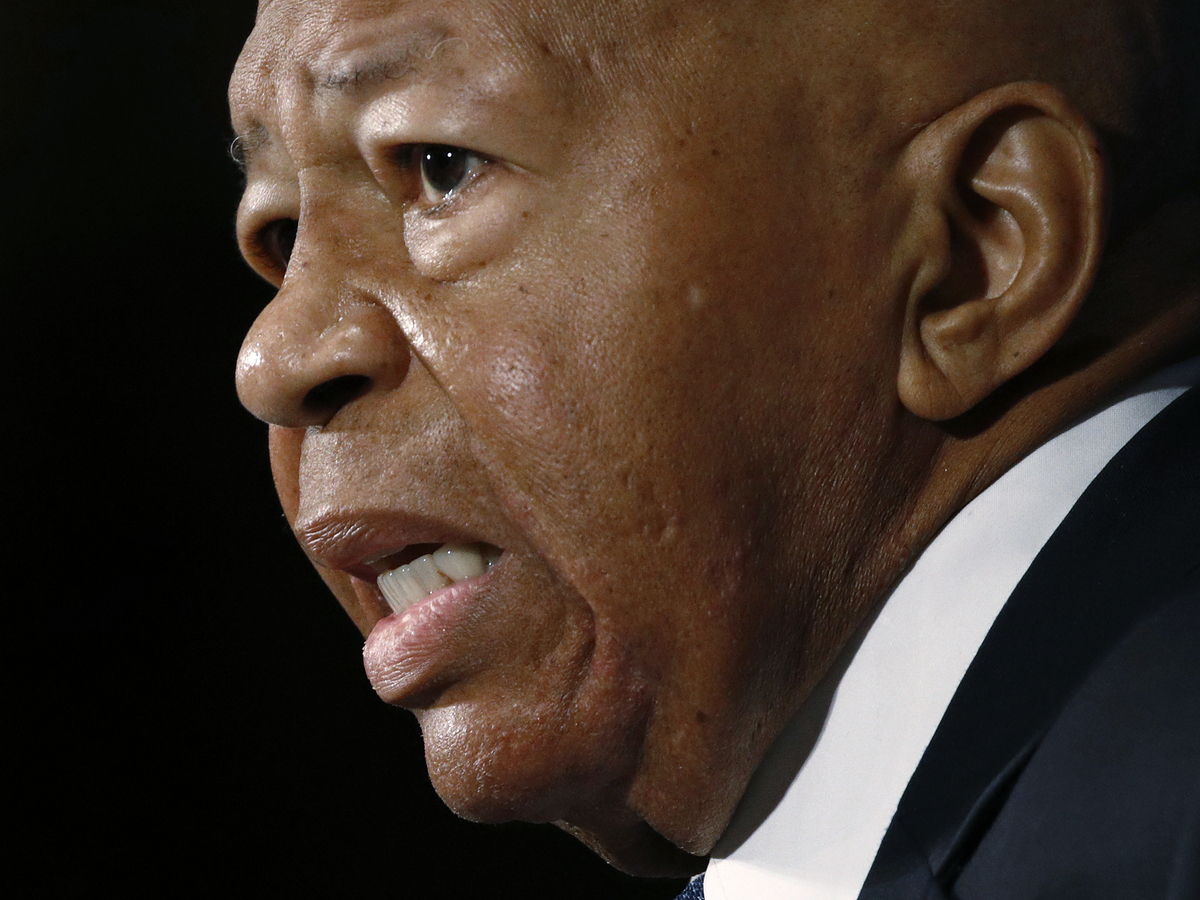 Rep. Elijah Cummings, D-Md., speaks during a luncheon at the National Press Club in Washington in August.

Rep. Elijah E. Cummings, a Baltimore attorney and civil rights advocate who served in Maryland's legislature before representing the state in the U.S. House, where he took on a lead role in investigating President Trump, has died. He was 68.

Cummings, the head of the powerful House Committee on Oversight and Reform, died early Thursday at Johns Hopkins Hospital from complications related to longstanding health challenges, according to The Associated Press.

"He worked until his last breath because he believed our democracy was the highest and best expression of our collective humanity and that our nation's diversity was our promise, not our problem," said Cummings' wife, Maryland Democratic Party Chair Maya Rockeymoore Cummings. It's been an honor to walk by his side on this incredible journey. I loved him deeply and will miss him dearly."

House Speaker Nancy Pelosi called Cummings "my brother in Baltimore" as she spoke about him on Thursday.

"In the Congress, Elijah was considered a north star," Pelosi said. "He was a leader of towering character and integrity." She added, "He lived the American dream, and he wanted it for everyone else."

"My warmest condolences to the family and many friends of Congressman Elijah Cummings. I got to see first hand the strength, passion and wisdom of this highly respected political leader. His work and voice on so many fronts will be very hard, if not impossible, to replace!"

Former President Barack Obama issued his own statement saying, "Michelle and I are heartbroken over the passing of our friend, Elijah Cummings.

"As Chairman of the House Oversight Committee, he showed us all not only the importance of checks and balances within our democracy, but also the necessity of good people stewarding it," Obama said.

The 12-term congressman had failed to return from an unspecified medical procedure and missed two legislative roll call votes on Tuesday, the first day after a two-week recess, according to The Baltimore Sun.

In a statement on Sept. 30, Cummings said his doctors expected him to be able to return to Washington "when the House comes back into session in two weeks." It said he'd be in "constant communication" with his staff and congressional colleagues while he was away.

Cummings was among the three Democratic committee chairmen who signed a letter last month that accompanied a congressional subpoena of Secretary of State Mike Pompeo, who has declined to testify in the ongoing impeachment inquiry of the president.

According to an official biography of Cummings, the Baltimore native attended Howard University, where he obtained a bachelor's degree in political science and served as student government president. He later obtained a law degree from the University of Maryland School of Law.

He served for 13 years in Maryland's House of Delegates before winning his congressional seat in 1996.

"Congressman Cummings has dedicated his life of service to uplifting and empowering the people he is sworn to represent," his official biography says.

"He began his career of public service in the Maryland House of Delegates, where he served for 14 years and became the first African American in Maryland history to be named Speaker Pro Tem," it says. "Since 1996, Congressman Cummings has proudly represented Maryland's 7th Congressional District in the U.S. House of Representatives."

Cummings was born and raised in Baltimore and lived there his entire life in what he described as the "inner inner city." He was one of seven children of parents who worked as sharecroppers before moving to the city in the 1940s, according to the Sun.

Discussing Cummings' connection with his constituents in Baltimore, Sherrilyn Ifill, president of the NAACP Legal Defense and Educational Fund, tells NPR's Noel King, "he really was a moral force in the community."

"People trusted him in the unrest after Freddie Gray was killed — it was Elijah Cummings who could walk into the crowd and be recognized and have people respond to him," Ifill says. "And so I think what the country has seen of him over the last year is a reflection of what many of us here in Baltimore have known for the 20 years of his leadership. A man of tremendous, tremendous integrity."

As a prominent Democratic lawmaker, Cummings frequently found himself on the receiving end of Trump's Twitter account. In an infamous series of tweets in July, the president referred to Cummings' Baltimore district as "rat and rodent infested" and suggested that the congressman seldom goes there.

Elijah Cummings spends all of his time trying to hurt innocent people through “Oversight.” He does NOTHING for his very poor, very dangerous and very badly run district! Take a look.... #BlacksForTrump2020 https://t.co/seNVESZUht

"Mr. President, I go home to my district daily," Cummings fired back in a letter to Trump. "Each morning, I wake up, and I go and fight for my neighbors."

Referring to investigations of the president, which he perceived as the true impetus for the derogatory remarks, Cummings said in the letter that it is "my constitutional duty to conduct oversight of the Executive Branch. But it is my moral duty to fight for my constituents."

Despite the president's remarks, Cummings continued to reach out to the White House and called on government officials to stop making "hateful, incendiary comments" that divide and distract.

Mr. President, we can address this together. Two years ago, I went to the White House to ask you to endorse my bill to let the government negotiate directly for lower drug prices.

When Democrats took the House in the 2018 election, political pundits had predicted that Cummings' chairmanship of the Oversight Committee would be a "nightmare" for Trump.

"Are we going to be the nightmare? he mused in an interview with the Sun. "It's in the eye of the beholder."