Accessibility links
Mick Mulvaney On Ukraine, Impeachment: Politics Is Part Of Foreign Policy In a rare press briefing, the acting chief of staff said the president held up aid to Ukraine as part of a quid pro quo. Hours later, he changed course, saying there was "absolutely no quid pro quo." 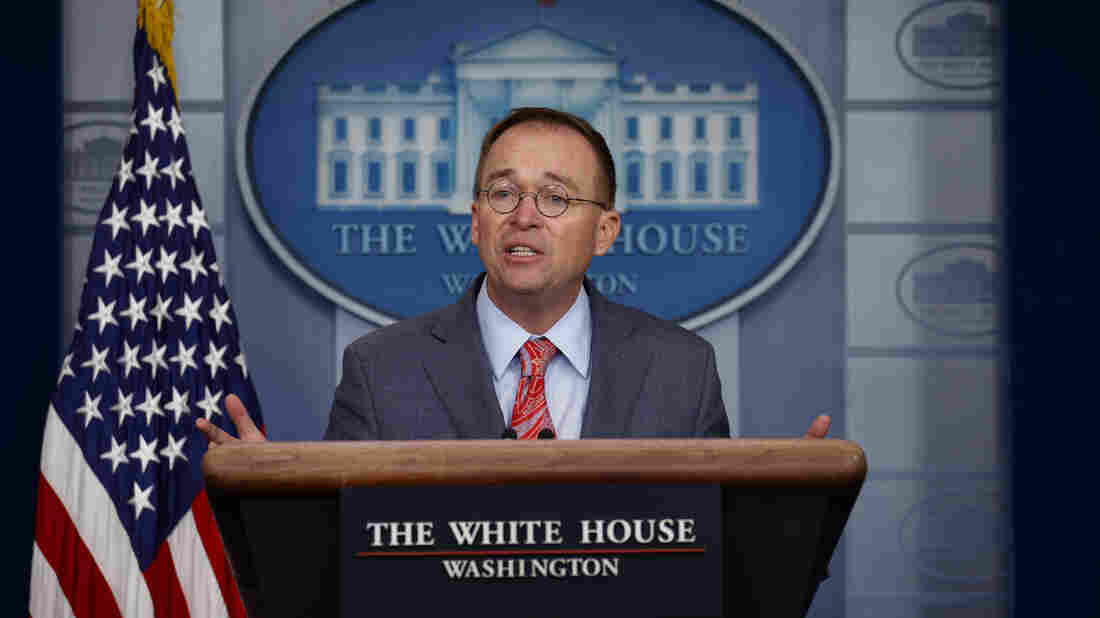 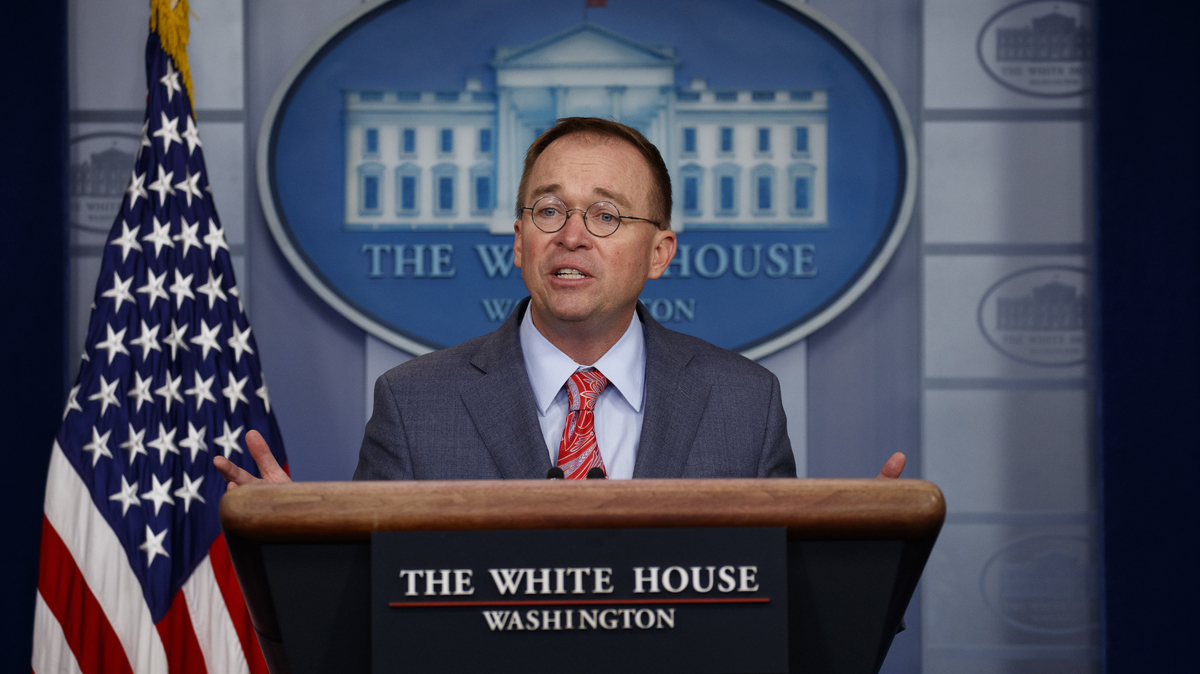 Mulvaney was asked whether it was a quid pro quo for the White House to condition a meeting between Trump and Ukraine's president on an agreement by Ukraine to launch an investigation that might help Trump politically.

"Get over it. There's going to be political influence in foreign policy," he said, adding that "elections have consequences."

He later tried to walk back those comments.

Watch: 'Get Over It'

Mulvaney said that he wasn't involved with the other request that Trump made of Ukrainian President Volodymyr Zelenskiy — to investigate the family of former Vice President Joe Biden.

But he did admit that Trump held up aid to Ukraine as part of a quid pro quo — something Trump himself has denied.

Mulvaney later tried to recharacterize his remarks. Though he had multiple opportunities to walk back his comments during the press conference with reporters, the acting chief of staff said in a statement Thursday evening that there "was absolutely no quid pro quo between Ukrainian military aid and any investigation into the 2016 election" nor "any condition on the flow of the aid related to the matter of the DNC server."

In the press briefing, the president's top aide argued that the administration held up the money so that the Ukrainian government would comply with an ongoing investigation into the 2016 elections and that it "had absolutely nothing to do with the Bidens" or the 2020 race.

On his phone call with Zelenskiy, Trump brought up a debunked conspiracy theory that it may have been Ukraine — not Russia — that interfered in the 2016 election and that a Democratic National Committee server was being stored somewhere in Ukraine.

A senior Justice Department official later told NPR's Ryan Lucas that "if the White House was withholding aid in regards to the cooperation of any investigation at the Department of Justice, that is news to us."

It became clear later on Thursday that Trump's private legal team was not happy with Mulvaney's performance and statements.

In broad terms, during the press conference, Mulvaney further strengthened the accounts formed so far of the Ukraine affair, also including Trump's reliance on his personal lawyer Rudy Giuliani.

Trump, as president, can give assignments to anyone he wants, Mulvaney said, and he faulted Democrats — who are conducting an impeachment inquiry into Trump in connection with the Ukraine scheme — for being disappointed there is no "cover-up."

A whistleblower complaint alleged that Trump pressured Zelenskiy to investigate Biden and his son Hunter. But as Mulvaney observed, the White House released a memorandum of a call Trump had with Zelenskiy on July 25 and has been open about its conduct.

"No one here had any problem with the call," Mulvaney said Thursday.

Trump told one diplomat inside the administration, Ambassador Gordon Sondland, that there was no "quid pro quo" with Ukraine, which Sondland later related to counterparts in text messages that have since been released by Democrats.

But Sondland told House investigators on Thursday that he didn't know in real time about the broader scheme to try to extract the political investigations from Zelenskiy.

In his written opening statement, Sondland also said the account of Trump's call with Zelenskiy that he received included no mention of the Bidens — suggesting that, if true, the White House circulated a sanitized version of the conversation within the administration and one different from the one it later issued publicly.

Watch: Money Holdup Had 'Nothing To Do With Biden'

NPR's David Welna has reported that, in May, the Pentagon certified that Ukraine had "taken substantial actions" to curtail the country's corruption.

Mulvaney also in the briefing room that the 2020 Group of Seven conference will be held at the president's own resort, Trump National Doral in Miami.

As NPR's Brett Neely reports, "The Trump administration's decision to host the high-profile international summit at Doral is sure to stoke the ongoing controversy about Trump's decision to maintain his ownership of his businesses while also serving as president."