Accessibility links
On 'Pang,' Chairlift's Caroline Polachek Is A Pop Cyborg With A Human Heart As the voice of Chairlift, Caroline Polachek crisscrossed indie and mainstream tastes. Her solo LP adds digital flex to that voice, melding real and "enhanced" performance into one penetrating force.

A Pop Cyborg With A Human Heart

A Pop Cyborg With A Human Heart

On Caroline Polachek's 'Pang,' the voice of Chairlift revels in shiny upgrades 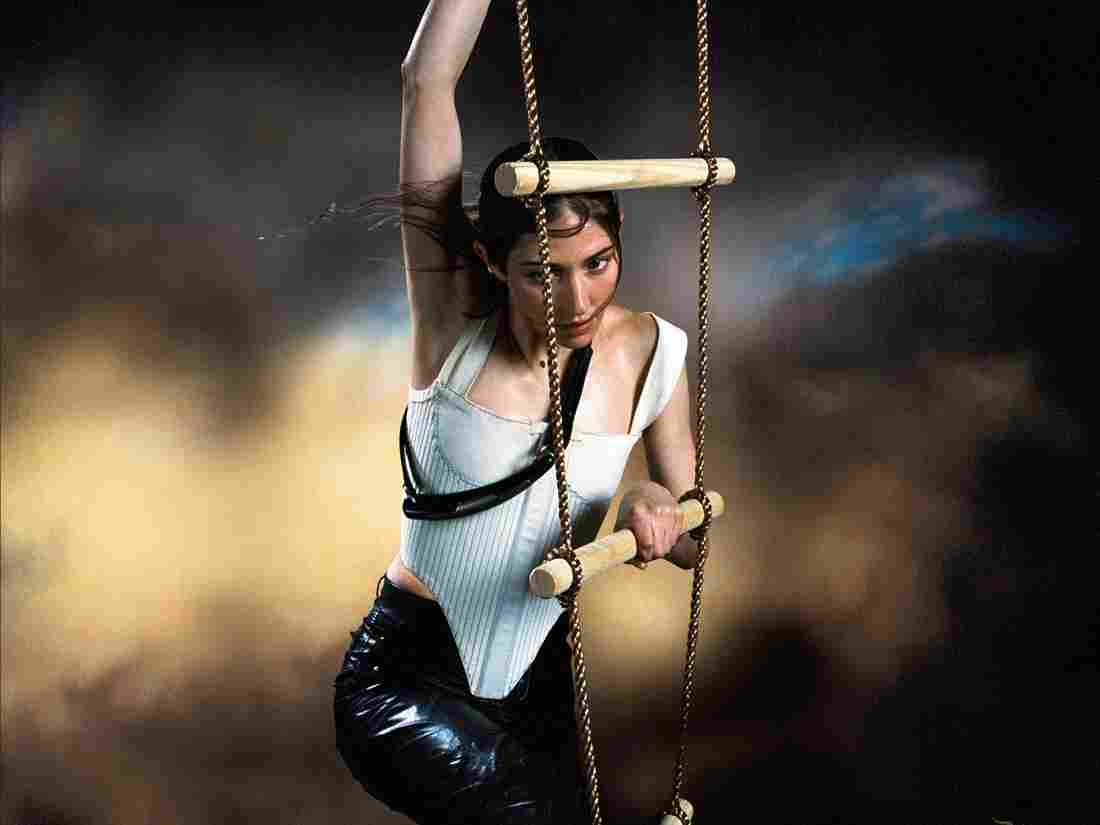 Caroline Polachek in the cover art from Pang (out Oct. 18), her first solo release under her own full name. Columbia Records hide caption 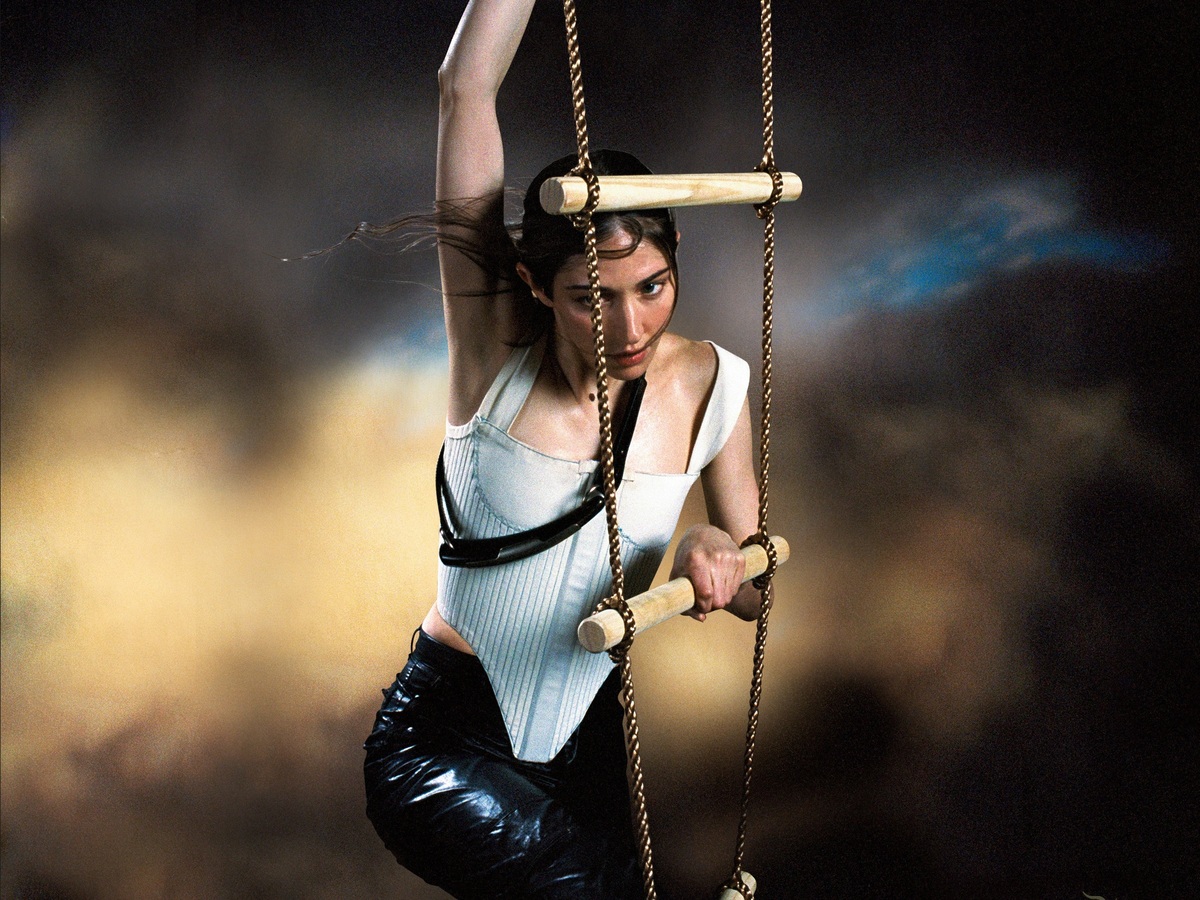 Caroline Polachek in the cover art from Pang (out Oct. 18), her first solo release under her own full name.

In its highest register, Caroline Polachek's voice sounds like it might have slipped loose from the circuits of a synthesizer. It lifts skyward on "Bruises," the breakout single from her former band Chairlift, which more than 10 years ago first got its hooks in listeners by way of an iPod commercial. The verse melody bobs up and down much like a jingle, a tune meant to inspire hunger and then evaporate, but the chorus tilts out of the stable grooves of advertising as Polachek unravels the word "you" across a chain of syllables, her head voice lithe and airy, sharpening the dramatics of what might otherwise have gotten lost in the glut of disposably twee songs offering escape in the Bush era.

Though the New York act — a trio at first, then just Polachek and multi-instrumentalist Patrick Wimberly — signed to Columbia Records toward the start of its career, it came to crystallize the omnivorous pop tendencies that critics and listeners would group haphazardly under the "indie" banner. Over three albums from 2008 to 2016, Chairlift availed itself of funk guitars and trance synths, snaking bass lines and skittering breakbeats. At the heart of the mix surged Polachek's voice, a flexible, daring presence whose slant vowels and muddied diction echoed the well-parodied "indie girl" affectations of Joanna Newsom, Regina Spektor and Feist, even as its falsetto flights gestured toward millennial pop icons like Jessica Simpson and Christina Aguilera. In her nimble delivery, she unified musical spheres that were supposed to be diametrically opposed.

A Rational Conversation: Is PC Music Pop Or Is It 'Pop'?

Polachek has continued to weave between worlds since "Bruises." She co-wrote "No Angel" for Beyoncé's 2013 self-titled album, and her voice floats ominously over an eerie piano track on the 2018 LP from felicita, a member of the British experimental pop collective PC Music. Her solo alter-egos perform similar oscillations: As Ramona Lisa, she let resolutely gothic bell samples toll over gentle vocal pop. In 2017, after Chairlift's dissolution, she released an ambient electronic album completely absent of vocals, under the initials CEP. Her body of work is chameleonic, perplexing and voracious; for every one thing she is, another hovers close behind.

Pang (out Oct. 18), the first solo album released under Polachek's full name, exploits the volatility of her desultory past. It is a pop album charged with contradiction, in turn exhilaratingly gleeful and disarmingly morose. While it churns with real feeling — with the thrill of freshly sparked attraction and the desperation of post-breakup sleeplessness — Pang also flirts openly with the trappings of artificiality. Polachek's voice drips with rhinestones of Auto-Tune, that pitch-correcting technology historically cited as a cheap substitute for real artistry. Computer processing stretches her delivery past its organic limits, letting her breathlessly crest an impossibly high note or leap between pitches instantaneously without a hint of glissando. She tramples the line between a real voice and a false one, rejecting that binary and embracing a cyborg embodiment. When her voice shivers like a cluster of wind chimes on the thirst anthem "Ocean of Tears," she doesn't sound like a woman and she doesn't sound like a machine. She's an amalgam, reveling in the ambiguity of her synthesis.

From Cher's 1999 Auto-Tuned hit "Believe" to the recent work of the anarcho-pop duo 100 gecs, cyborg voices have thrived in the music of the past two decades. As cyborg pop's current reigning queen, Charli XCX is the artist to whom Polachek's new album invites the easiest comparisons (Polachek featured on Charli's 2017 release Pop 2, and the two artists share a collaborator in the PC Music producer A.G. Cook, who co-produced "Ocean of Tears"). But while Charli stokes all-night ragers in her songs, even the sad ones, Polachek stops short of the same abandon. Her songs are as likely to chase pleasure as they are to fold in on themselves in spells of introspection. Even those about physical desire carry notes of exasperation and woundedness: "So hot you're hurting my feelings," she sings on the song of the same name, "can't deal." Charli courts ecstasy with an enthralling brashness, while Polachek's most engaging moods bend toward melancholy.

At Pang's soft center is a trio of songs that trace the dissolution of a relationship and its aftermath. On "I Give Up," Polachek holds up the "pathetic kind of sad relief" that comes with the breakup of a bad pairing; excitement still rims her despair. But with "Look at Me Now" and "Insomnia," she fully wades into her grief, sleeping less and losing weight, surveying the wreckage of her recent past. In its starkness and its simplicity, "Look at Me Now" shines from the album's sad heart. Polachek frames it as a letter to herself, a series of questions aimed at an unknowable future: "When you finally get this / Where will you be? / Will you be a shipwreck or a star? / Falling for a boy who doesn't play guitar?" She sings over the strum of an acoustic guitar, an everyday instrument made alien by the surrounding sheen. The record's computerized milieu makes that six-string, just barely recognizable under reverb and gloss, sound shocking.

Polachek has called this song the album's "diary entry," and also "an umbilical connection to the Lilith-Fair-era artists I grew up listening to, like Jewel and Sarah [McLachlan]." Though both Jewel and McLachlan enjoyed abundant radio play at the turn of the millennium, they were positioned in part as alternatives to Britney Spears and the chart-ruling teen pop of the time. A 2002 Rolling Stone feature nodded to Jewel's "dead-serious folkiness," while a 1999 CNN profile of McLachlan included the subtitle "Songwriting as therapy." Their raw lyrics read as unvarnished confessionalism; their emotional delivery granted them gravitas. Praise for them was rooted in the perception of authenticity, and in opposition to artists who did not write their own songs, play instruments, or sing without pitch correction. Twenty years ago, these were the two modes available to women making pop: If those adult-contemporary artists opened pressure valves straight from their dark souls, then Spears and her corporate-puppet peers simply dangled baubles within reach of kids too green to know better.

Polachek, singing her diary into a digital filter that curdles her vowels — much like super-producer Max Martin did to Britney's — collapses the gulf between these two worlds, finding value in the emotionality of both, just as critical conversations have begun to over time. In a 2014 essay, Alice Bolin illuminates the pain hiding in plain sight on Spears' debut single, "...Baby One More Time." "My loneliness is killing me," the star sings over and over, and yet because her voice was wrapped in so much production and layered with so many overdubs, no one at the time heard the words — just the strangling earworm of the melody or the percussive whip of the consonants. In retrospect, of course there's sadness there. Of course it's cruel to pluck a kid from her life and turn her into an avatar of longing for millions of tweens, and then gawk at her as she stumbles and inevitably falls from her imposed perch. A later single, "Lucky," traced the vice of early stardom more explicitly, foreshadowing Spears' public struggles with mental illness in the mid-aughts. In these shrink-wrapped songs, the artist's voice brings pleasure, like all effective pop does. But a closer scan overturns pain no less real than the kind confessed over an acoustic guitar at a coffee-shop open mic.

The pop cyborgs of the late '90s and early 2000s seemed to sing from behind Plexiglas, barring all intimacy, but today the advent of social media and video-sharing platforms has punctured that vaulted cage. The space between star and fan grows more nebulous, more charged; pop singers like Clairo and Billie Eilish record at home and shoot videos on their webcams. Emotionality and confessionalism now belong to the same world as the slickest, most artificial vocal production: The cyborg feels and bleeds with the same force as the all-natural voices that rang out at Lilith Fair. Polachek's music takes flight in the wreckage of the silos that once neatly contained voices "real" and fake. In both pleasure and pain, she seeks intensity above all, the electronic flourishes of the production adding fangs to her voice rather than dulling its immediacy.

On Pang's title track, she sings of "a beautiful knife / Cutting right where the fear should be." Excising fear still leaves behind a wound; the sparks that fly when hesitation gives way to infatuation can still burn the skin. But when Polachek gathers up all the processed voices that flutter through the song and launches them into a single syllable — "pang!" — the hurt and the thrill cleave together until they're indistinguishable. All that's left is breathless adrenaline, the rush of wanting with no promise of getting, the lure of feeling at maximum saturation for its own sake.

Sasha Geffen is a writer based in Colorado. Their first book, Glitter Up the Dark: How Pop Music Broke the Binary, will be published by the University of Texas Press in April 2020.