Accessibility links
Book Review: 'No Stopping Us Now' Is A Lively Chronicle Of Female Aging In America Known for the punch of her columns, The New York Times' Gail Collins sprinkles conversational, sardonic asides throughout No Stopping Us Now in an effort to keep the decades-long hike spry. 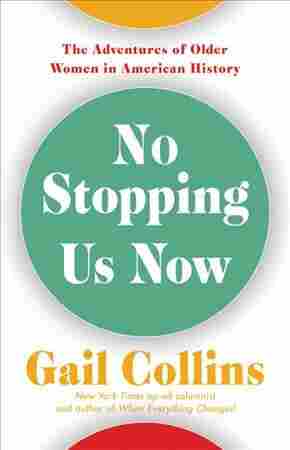 No Stopping Us Now

The Adventures of Older Women in American History

Gail Collins warns us upfront in her robust social history of America's changing attitudes toward women past the first blush of youth that "This is not going to be a tale of steady progress toward an age-indifferent tomorrow."

No Stopping Us Now makes clear, for example, that two particularly challenging times to be an older woman in America were the youth-obsessed 1920s and 1960s. Take heart, though: As its title indicates, the general trend chronicled in Collins' new book is encouraging.

In the 18th century, women beyond their early 20s were considered past their prime, and post-menopausal women, when not branded witches, were essentially put out to pasture. But with increased life expectancy and more women in the workforce, society's idea of middle age keeps getting pushed upward — from 30 or 40 well into the 60s. Collins, a pithy New York Times columnist born in 1945, quotes advertising guru Faith Popcorn's remark that 68-78 has become "the adolescence of old age."

Like her more broadly focused America's Women: Four Hundred Years of Dolls, Drudges, Helpmates, and Heroines (2003), this age-centric survey spans four centuries. Collins begins with the Colonies, when spinsterhood was frowned upon and even 50-year-old widows were in demand because of the dearth of women. She quotes Benjamin Franklin, who counseled a young male friend that older women are more interesting, and added that anyway, "In the dark all Cats are grey."

Among the many interesting facts Collins weaves into this expansive history: In the early 18th century, senior church congregants were seated in the front pews, but by the end of the century, that honor was reserved for the richest worshippers. She reminds us repeatedly that "If there's one ringing message in American history it's that if you're important economically, you're important."

Collins is also the author of When Everything Changed: The Amazing Journey of American Women from 1960 to the Present (2009), which includes the recollections of regular women who have lived through the era, rather than the primarily famous women she writes about in No Stopping Us Now. Not surprisingly, there is some overlap between her books, particularly in her accounts of women's rights champions. Here, their decades-long crusades are refracted through the pince-nez of age, so we meet Elizabeth Cady Stanton as a warm, matronly gray-haired mother of seven children, and in contrast, Susan B. Anthony as a "spare, austere spinster." Other activists and reformers include Harriet Tubman, Sojourner Truth, Jane Addams, Betty Friedan, Ella Baker, Mother Jones, and Gloria Steinem, who, when told she didn't look 40, famously declared, "This is what 40 looks like."

Similarly, Collins considers America's first ladies in relation to their age. Martha Washington was a wealthy widow in her 20s who had already given birth to four children and ran the Custis family's vast estates when she married George Washington. She had no further children, which suggests that it was he who had the fertility problem. She was in her 50s when she became the country's first first lady — as were many subsequent first ladies, with the notable exception of 31-year-old Jacqueline Kennedy.

Eleanor Roosevelt, Collins reminds us, was a 48-year-old mother of five grown children when she came to the White House in 1933, but had seemed middle-aged even when young. Yet she was tireless in her fight for civil rights through her 70s. Collins flags Betty Ford's "transformative candor" over her mastectomy and addiction to alcohol and painkillers, and Michelle Obama's inspirational example as a health and fitness guru after she moved into the White House at 45.

In fact, self-care and the beauty industry are throughlines in No Stopping Us Now, along with changing attitudes towards menopause, hormone replacement therapy and cosmetic surgery. But few subjects garner as much of Collins' attention as hair dye. She cites mid-19th century objections to the use of makeup and hair coloring as "sailing under false colors," and gently mocks Clairol ads assuring women "You're not getting older. You're getting better!" She also quotes Nora Ephron, who in I Feel Bad About My Neck wrote, "There's a reason why forty, fifty, and sixty don't look the way they used to, and it's not because of feminism, or better living through exercise. It's because of hair dye."

Appearance, of course, is a particular concern of actresses, especially in the age of unforgiving screen closeups. Collins looks at the durable careers of Mae West, Sarah Bernhardt, Margaret Dumont, Katharine Hepburn, Jane Fonda, Meryl Streep, and Hattie McDaniel, who was 44 when she won an Oscar for her role as Mammy in Gone With the Wind, the first African American to do so. (McDaniel, Collins reminds us, famously commented that it's better to make $700 a week playing a maid than $7 a week being one.)

Known for the punch of her columns, Collins sprinkles conversational, sardonic asides throughout to try to keep this hike through the decades spry. About men giving up hair dye to avoid conscription before the Civil War, she admits, "Okay, possibly an apocryphal story." She has clearly made a concerted effort not to overlook black women, though other ethnicities — Asian, Muslim, Hispanic — are absent, even in her account of the 21st century.

It's easy to play the hole-poking game — Helen Gurley Brown and her 1962 manifesto Sex and the Single Girl get plenty of play, while Anna Wintour doesn't cop a mention. But there's more than enough to digest as is. Ruth Bader Ginsburg and Nancy Pelosi are both held up as paragons, of course. Less familiar — and particularly delightful — is Collins' portrait of former New Jersey Rep. Millicent Fenwick. The patrician, "pipe-smoking grandmother of eight with the Katharine Hepburn voice" was elected to the House in 1974 at age 64 — and also was the model for Garry Trudeau's Lacey Davenport character in his long-running Doonesbury strip. She is just one of the many fascinating, unstoppable exemplars Collins manages to squeeze into this tightly laced historical corset.