Accessibility links
Massive Gun Battle Erupts In Mexico Over Son Of Drug Kingpin 'El Chapo' Security forces came under attack and were forced to withdraw after they sought to arrest Ovidio Guzmán López, who is thought to have been running the Sinaloa cartel since his father's arrest in 2014. 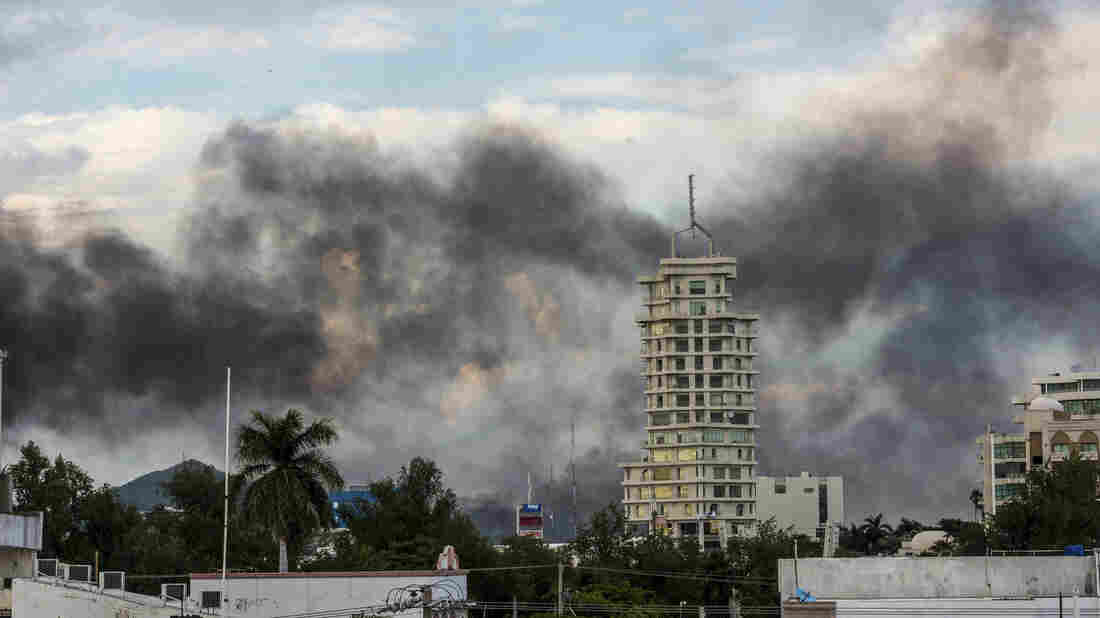 Smoke from burning cars rises in Culiacán, Mexico, on Thursday, after an intense gunfight between security forces and gunmen linked to the Sinaloa drug cartel. Hector Parra/AP hide caption 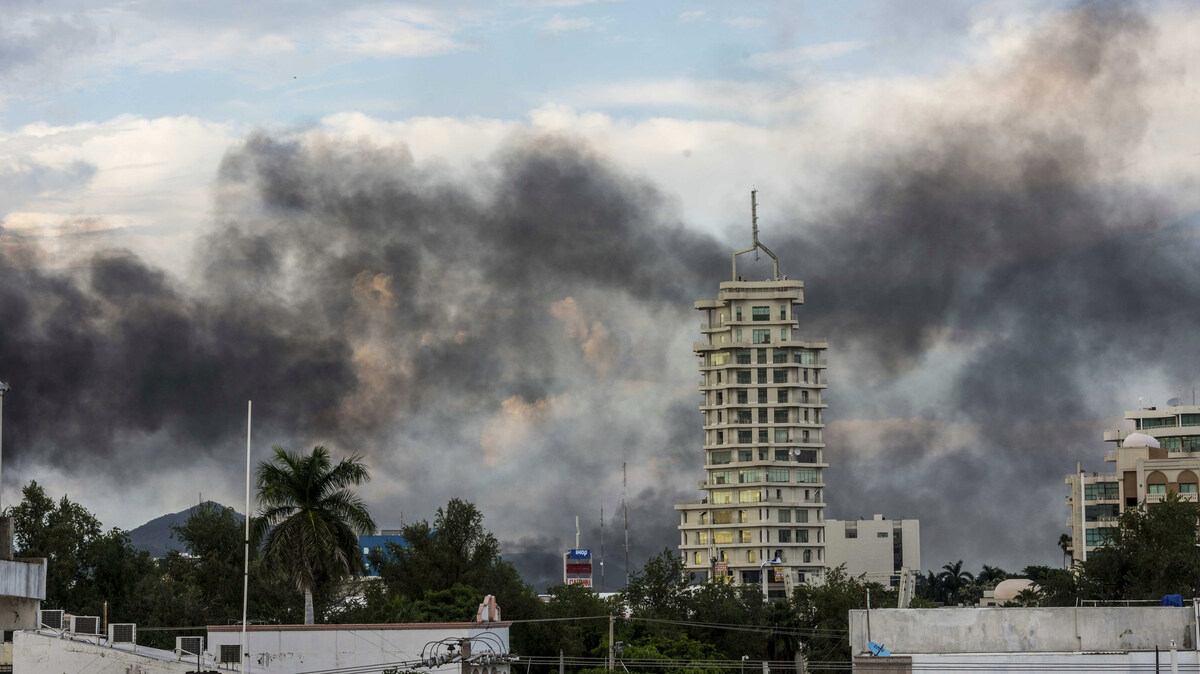 Smoke from burning cars rises in Culiacán, Mexico, on Thursday, after an intense gunfight between security forces and gunmen linked to the Sinaloa drug cartel.

Heavily armed gunmen went on a shooting rampage through the city of Culiacán, the capital of Sinaloa state on Mexico's Pacific coast, battling security forces after authorities attempted to arrest a son of imprisoned drug lord Joaquín "El Chapo" Guzmán.

The gunfire from what appeared to be sniper rifles and truck-mounted machine guns sent residents of the western city scrambling for cover. Burning vehicles littered the streets as the gunmen faced off against the National Guard, army and police.

Mexico's security secretary, Alfonso Durazo, said the fighting began when about 30 National Guard and army troops patrolling the city were fired on from a house occupied by Ovidio Guzmán López, who is wanted in the U.S. on drug trafficking charges.

Durazo said the security forces took control of the house and found Guzmán, who is also known as "El Ratón," inside. Soon after, the house was surrounded by "a greater force" of heavily armed gunmen and the troops withdrew.

"With the goal of safeguarding the well-being and tranquility of Culiacán society, officials in the security Cabinet decided to suspend the actions," he said.

Durazo did not initially specify whether authorities arrested Guzmán or let him go. Media outlets in Mexico later reported that for government had released the fugitive.

Shortly after the confrontation, gunmen – some wearing black masks — took off on a rampage, driving through the city in trucks firing heavy caliber weapons. 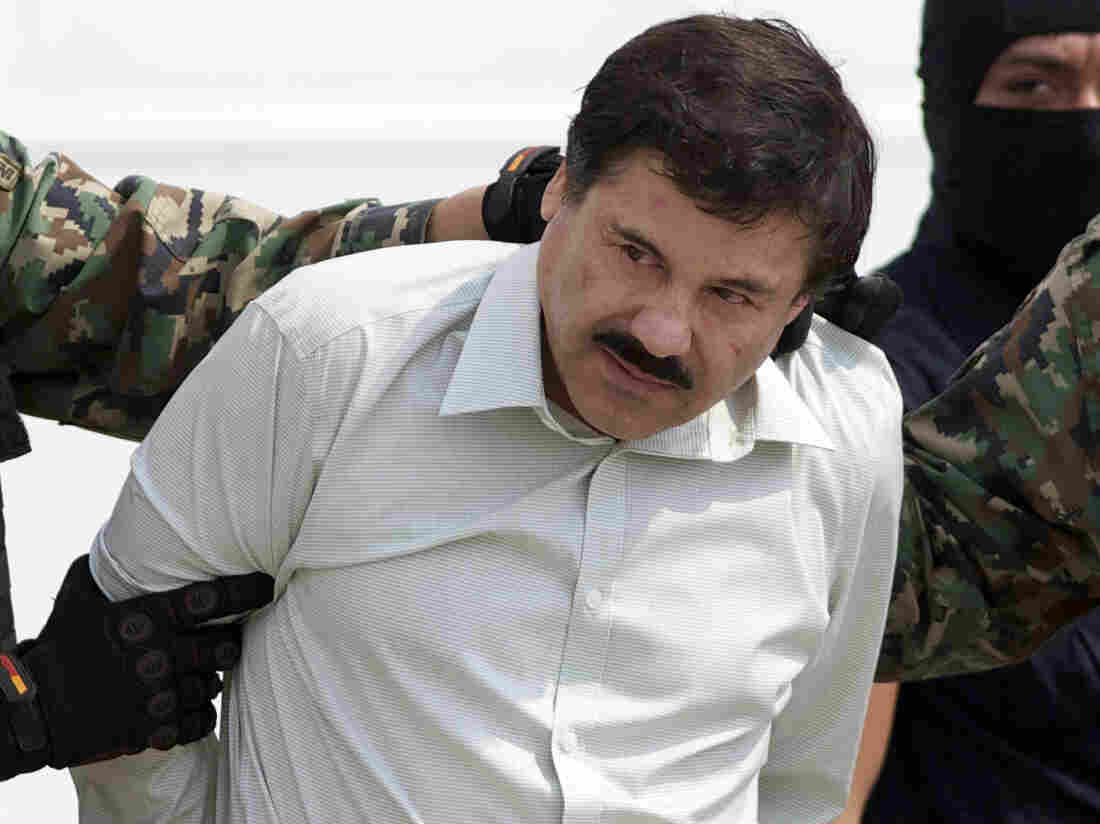 A 2014 photo of Joaquín "El Chapo" Guzmán being escorted to a helicopter in Mexico City following his capture. Eduardo Verdugo/AP hide caption 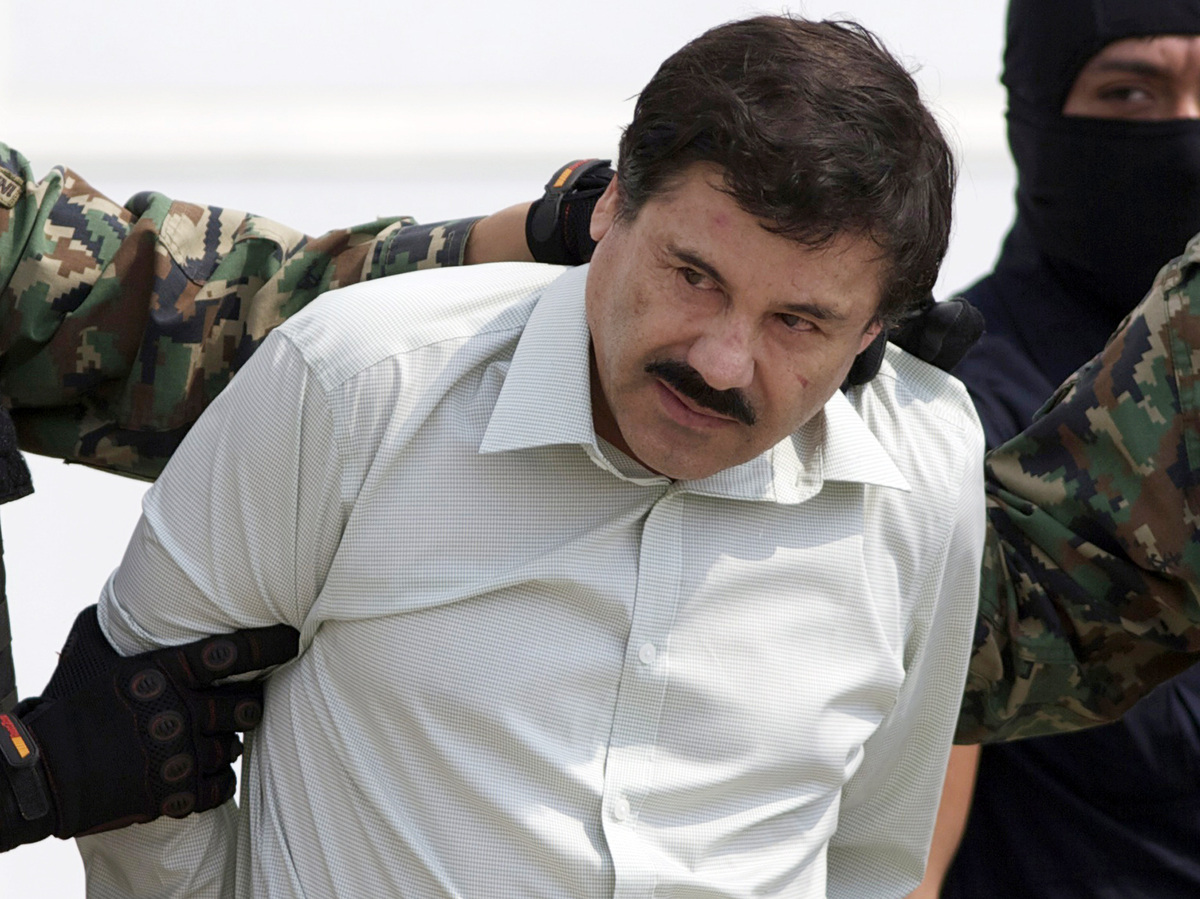 A 2014 photo of Joaquín "El Chapo" Guzmán being escorted to a helicopter in Mexico City following his capture.

Cristóbal Castañeda, the public safety director for Sinaloa state, told Milenio television that people had been wounded in the firing, but gave no figures. He did not rule out that there were deaths, according to The Associated Press.

El Chapo was tried this year in a U.S. court and sentenced to life in prison. His sons have reportedly taken over the Sinaloa drug cartel, considered Mexico's most powerful organized crime syndicate.

José Luis González Meza, a lawyer speaking on behalf of the Guzmán family, told the AP that "Ovidio is alive and free," but he did not elaborate.

Ovidio Guzmán was indicted in 2018 by a grand jury in Washington, along with a fourth brother, for the alleged trafficking of cocaine, methamphetamine and marijuana.