Accessibility links
'We Didn't Believe We Would See The Sun Rise': Refugees From Syria Arrive In Iraq More than 2,000 refugees have crossed into Iraq since Turkey began its assault on northeastern Syria last week. Aid groups are bracing for as many as 50,000 refugee arrivals. 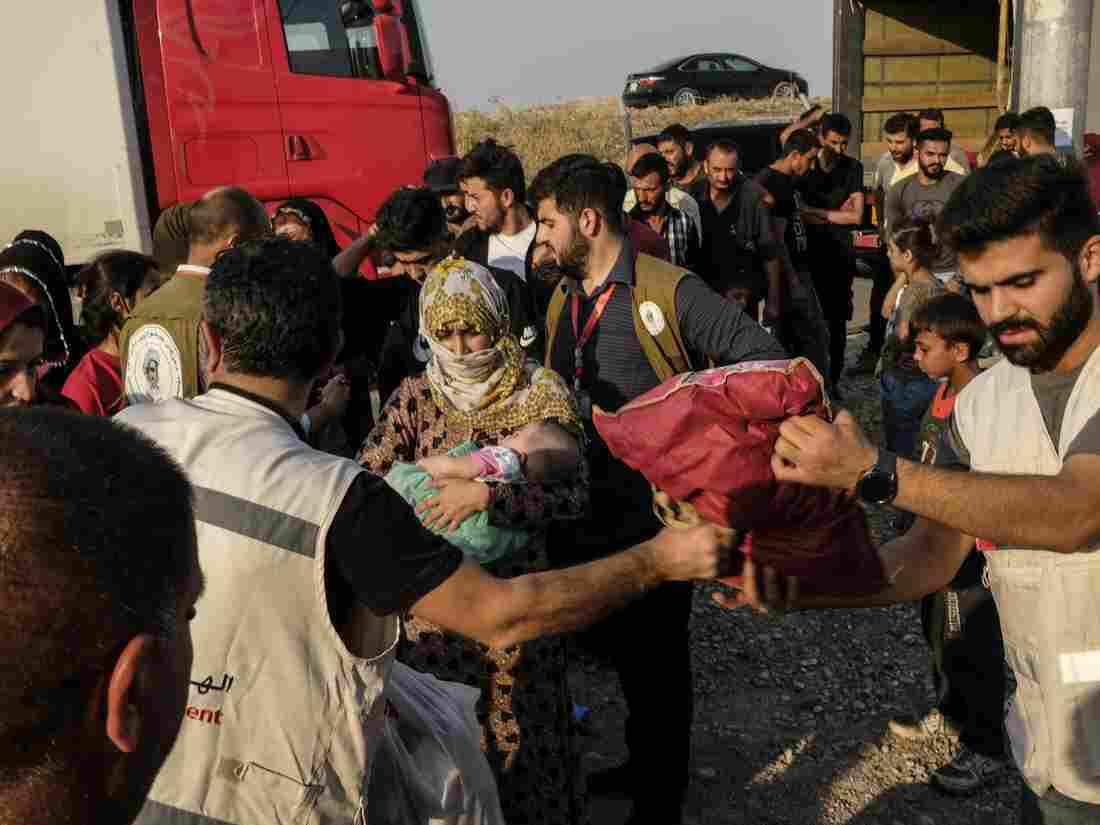 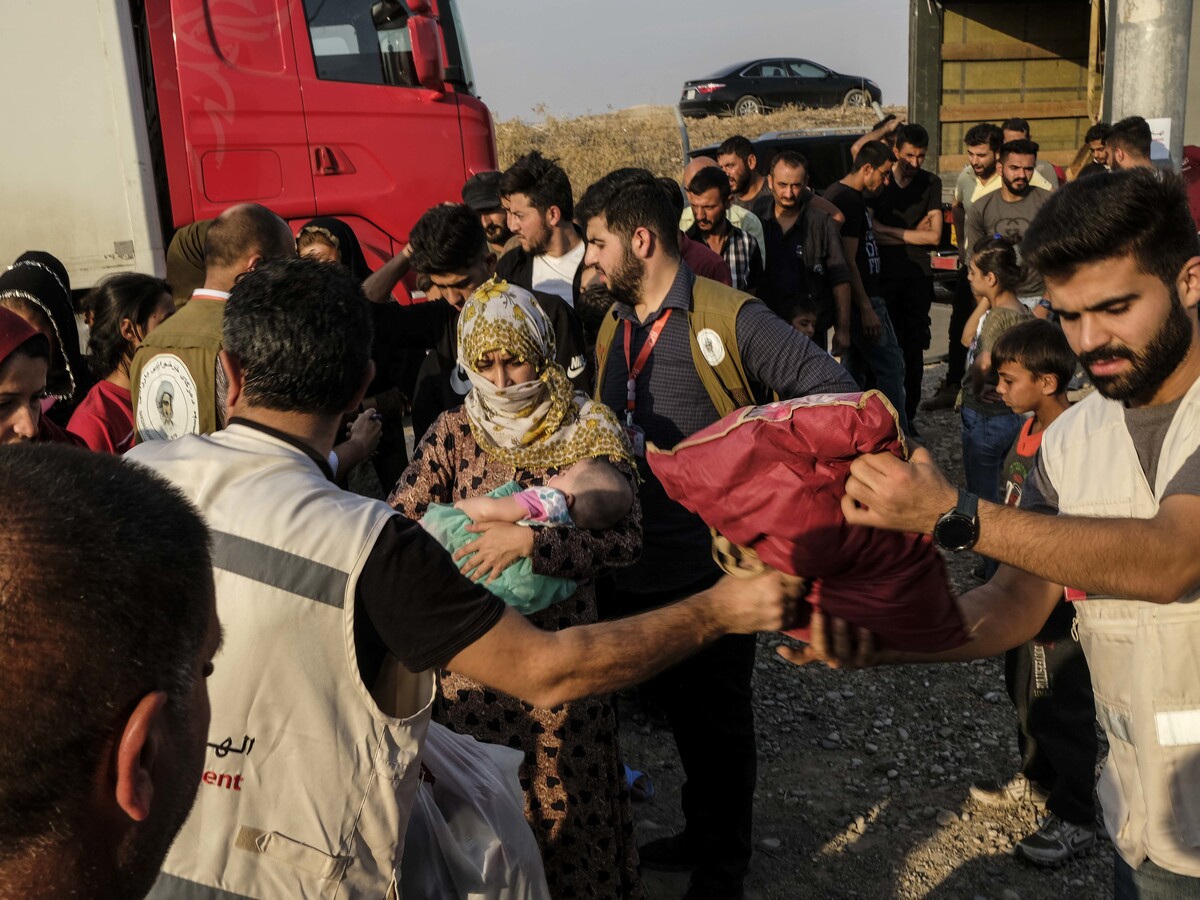 Syrians fleeing the Turkish incursion in northeastern Syria receive bedding materials as they arrive at a camp in Dohuk, Iraq, on Thursday.

A convoy of blue and white minibuses rolls into the Bardarash refugee camp in the Kurdistan region of Iraq, about 100 miles east of the Syrian border. The buses are full of crying babies, small children peering excitedly out the windows and worried-looking adults. Many of them have only the things they could carry with them in hours of walking to the border.

The refugees this week were some of the first to arrive in Iraq since Turkey began its assault on northeastern Syria on Oct. 9 and American forces withdrew, after President Trump announced the U.S. would end support to Kurdish allies in northeastern Syria.

Reporters' Notebook: The Moment Everything Changed In Syria

The refugees come from a Kurdish-led autonomous region known as Rojava, created after Kurdish Syrian forces who were U.S. partners broke away from the Syrian regime in 2012.

That region now seems doomed by the Turkish onslaught — vulnerable to a takeover by Syrian government forces, in addition to the Turkish incursion. Aid officials say more than 2,000 Kurdish Syrians crossed over to Iraq from northeast Syria in the six days after the Turkish assault began. Many paid smugglers to bring them across.

Some Fighting Continues In Syria Despite Turkish 'Pause'

In spite of a temporary cease-fire announced Thursday between the Turkish military and Kurdish Syrian forces, aid officials are still making contingency plans to host up to 50,000 refugees.

In less than a week, as U.S. troops left and the Turks advanced, the Syrian Kurds' dream that Rojava would survive as an autonomous Kurdish region of Syria came crashing down.

"I love Rojava but I'm afraid of [living in] Rojava," says Najah Raso, a Kurdish schoolteacher sitting behind her 14-year-old daughter and 12-year-old son on the black plastic seats of a bus. "I'm afraid not just for me, but for my daughter. ... When the airstrikes started, my daughter was terrified. We didn't believe we would see the sun rise."

Raso and her children made their way from their home in the city of Qamishli to the nearby city of Hasakah, but realized it wasn't safe there either. That's when they started walking toward the border. Raso's husband stayed behind, hoping to join them when he could make it across. 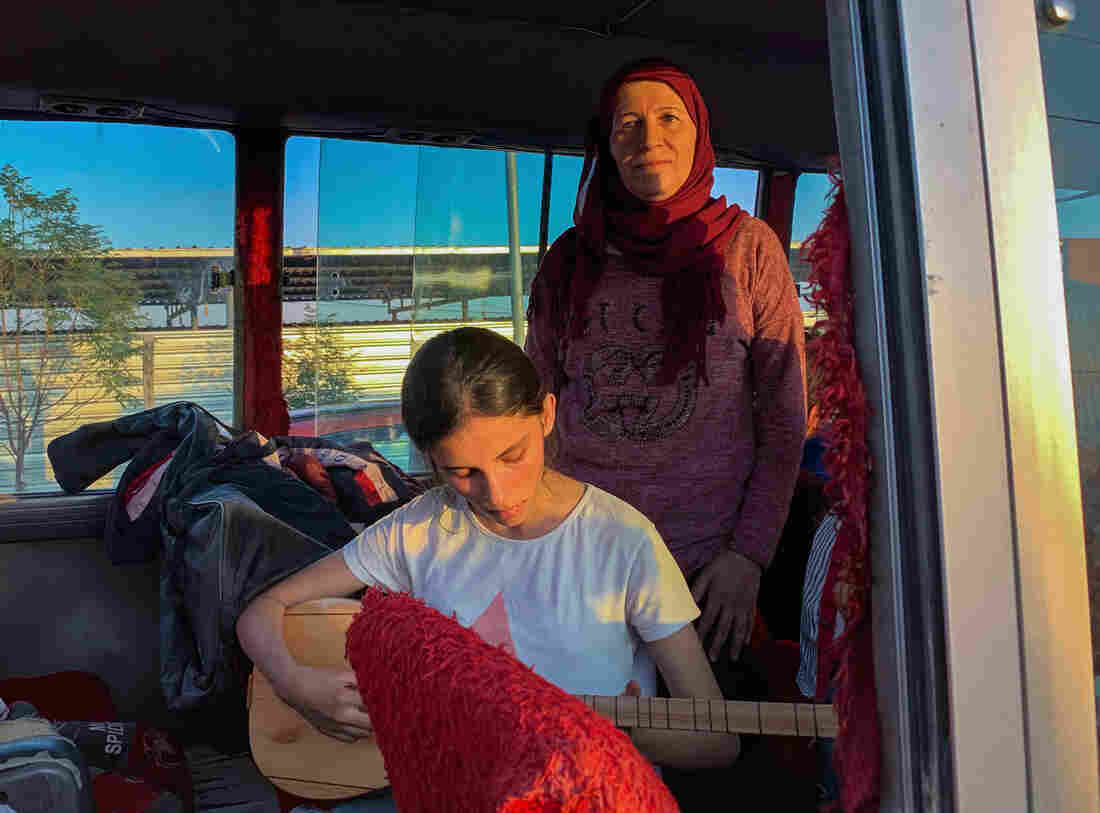 "We brought our ambitions," says Najah Raso. She and her daughter, Solin, 14, holding a Kurdish lute, were on a bus of refugees arriving from the Syrian border to a camp in the Kurdistan region of Iraq this week. More than 2,000 people arrived in Iraq over a six-day period, fleeing Turkey's assault on northeastern Syria. Sangar Khaleel/for NPR hide caption 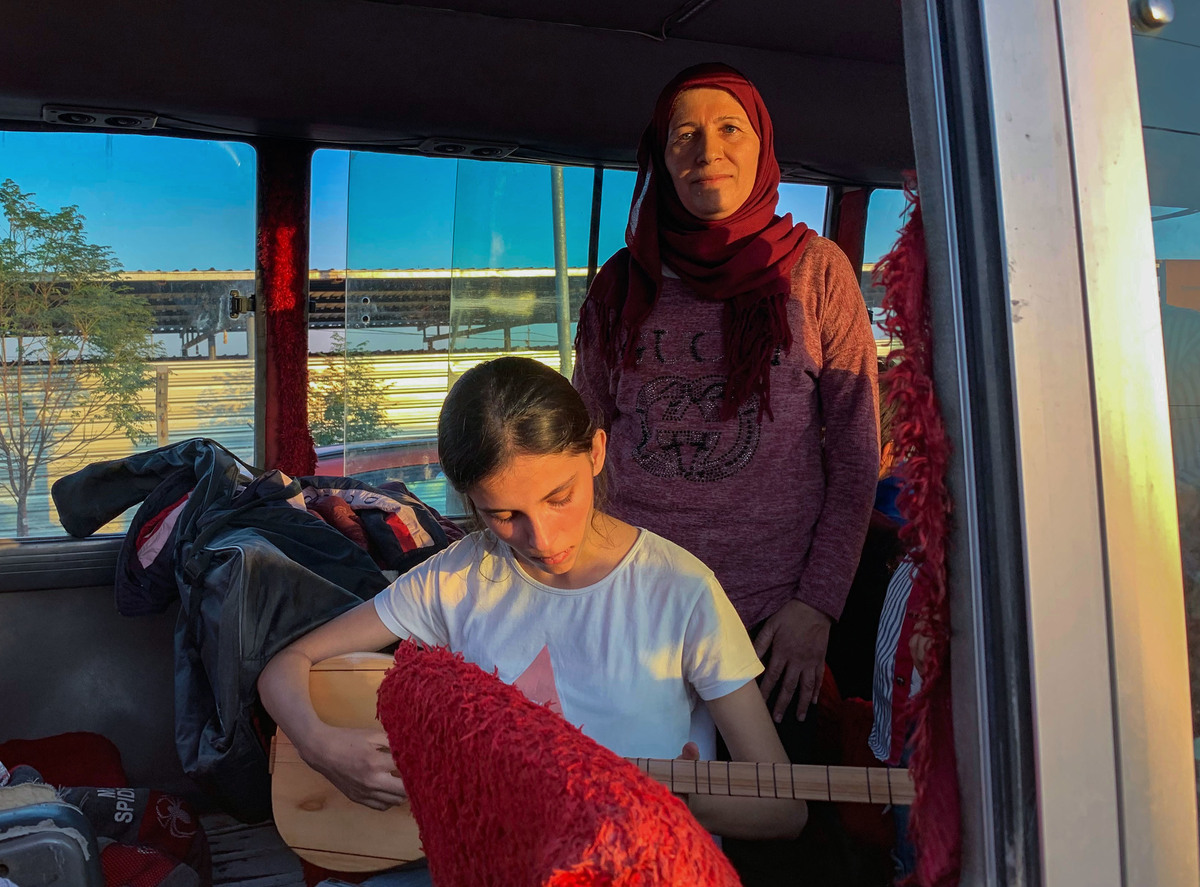 "We brought our ambitions," says Najah Raso. She and her daughter, Solin, 14, holding a Kurdish lute, were on a bus of refugees arriving from the Syrian border to a camp in the Kurdistan region of Iraq this week. More than 2,000 people arrived in Iraq over a six-day period, fleeing Turkey's assault on northeastern Syria.

Raso, who teaches Kurdish, wears a burgundy headscarf and fleecy pink top. Her daughter and son are dressed in T-shirts, with her daughter's shirt bearing the message: "Hey you Smile!" They didn't bring much with them, Raso says.

"We brought our ambitions," she says.

The family had already been displaced within Syria six times since the conflict began eight years ago.

"We'd go back and forth, from one area to another," she says. "If there was a strike in one area, we'd move to another area. And then when that was over, we would go back to our dreams, our lives."

Her daughter, Solin, a slender girl with dark blond hair pulled back into a ponytail, cries as her mother describes the terror of the shelling. She is carrying a padded case holding a tambur, a long-necked, Kurdish version of a lute — and a laptop with DVDs of an English-language course.

Her mother asks her to play something. Solin says no, there's no room on the bus.

Her mother pulls out the instrument anyway and hands it to her.

"Play anything about love," she tells her.

Solin takes the instrument and as her fingers move over the strings, she is transformed — completely fixated on the music. But instead of a love ballad, she plays a song called "We Carry a Refugee Tent on Our Shoulders."

Solin's ambitions include becoming a doctor. She talks animatedly about a center billed as an American language school that she attended in Qamishli, where she was studying English. The center closed when the fighting began.

"I want to learn English. Because I love this language," she says haltingly and earnestly in English.

Almost everyone on the buses has been displaced within Syria previously. A week before, most of them had homes and jobs, but when they crossed this border, they became refugees. At the Bardarash camp, their temporary new home, they are taken off the buses and into a large hangar, where a Kurdish charity has laid the floor with long plastic tablecloths and bowls of rice and beans.

"Basically from the [Iraqi] Kurdish side so far, they are welcoming everyone," says Tom Peyre-Costa from the Norwegian Refugee Council. "Officially, the border is open, but on the Syrian side, fighters are trying to prevent Syrian Kurds from reaching the crossing points."

Other aid officials similarly say the Kurdish Syrian administration tries to prevent many civilians from leaving, particularly young men who could be pressed into fighting.

Mohammad, a young Kurdish Syrian who did manage to get out and did not want to give his last name in fear of the Syrian regime, said he had come to join the rest of his family, who had fled Syria several years ago and was living in a camp in Iraq's Kurdistan region.

"The situation is not good in Qamishli," he said. "We don't know what will happen or who will take over the city."

Even if the cease-fire with Turkey holds, aid groups are making contingency plans for a huge influx of refugees, Peyre-Costa says.

"What is concerning is that the first batch six days ago were around 100, 200 people. But every day, we see a bigger group arriving," he says.

While many civilians are fleeing shelling, others have been displaced by a lack of water and food normally provided by aid organizations in Rojava.

Most international aid organizations withdrew from northeastern Syria when the Turkish incursion started, saying they could not protect their staff. The withdrawal halted a wide range of relief and stabilization programs, some funded by the U.S. government.

Syrian staff who implemented these programs have also fled the violence. A pumping station in Hasakah is no longer operational, according to officials at the Rojava administration, because there is no one left to run it. This has contributed to a lack of water. Hospitals and other medical facilities have been hit by airstrikes.

All of this has been made worse by the speed of the Turkish incursion and the U.S. troop withdrawal.

"We had contingency plans for a lot of different things happening," says one aid worker who was pulled out of Syria and asked to remain anonymous for security reasons. "We didn't have a plan for all of those things happening at once."