Accessibility links
Some Fighting Continues In Northern Syria Despite Turkish 'Pause' There are a lot of unanswered questions, like whether Kurdish forces are actually withdrawing from the border. The Pentagon says U.S. ground forces won't be involved in enforcing a "safe zone."

Some Fighting Continues In Northern Syria Despite Turkish 'Pause'

Some Fighting Continues In Northern Syria Despite Turkish 'Pause' 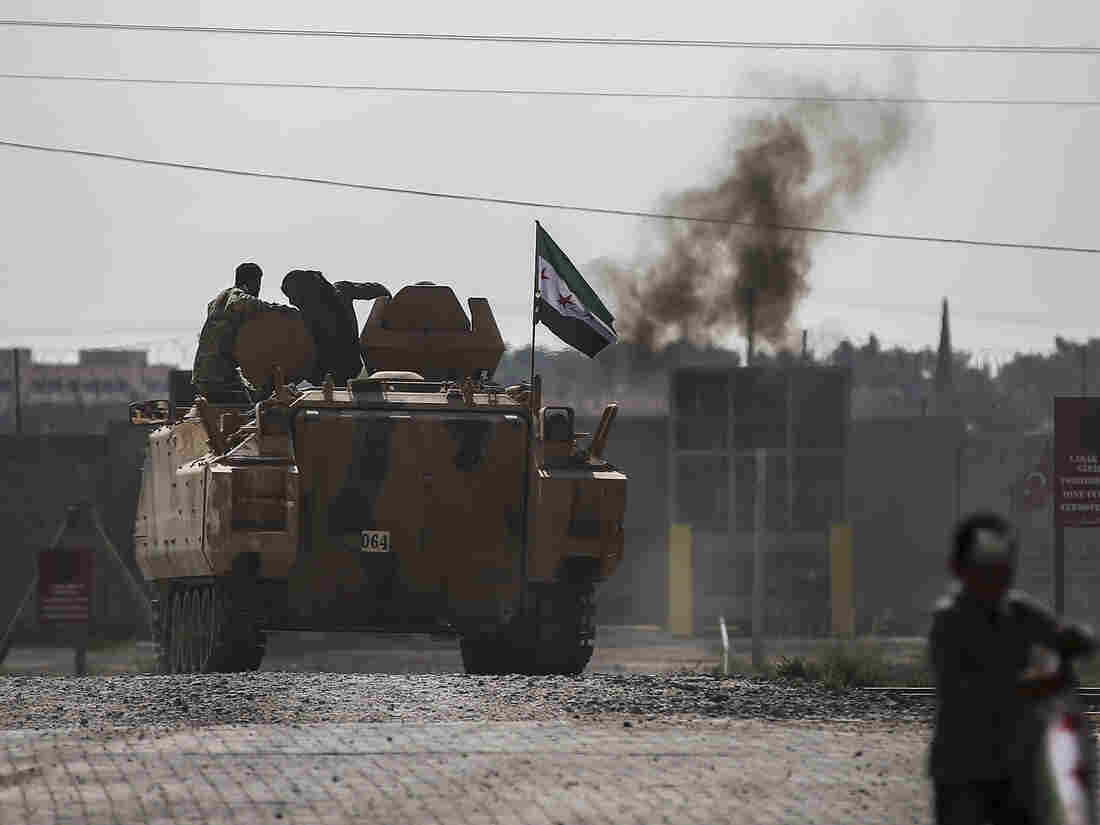 Fighting continued early Friday in a northeast Syrian border town at the center of the fight between Turkey and Kurdish forces, despite a U.S.-brokered cease-fire that went into effect overnight. Emrah Gurel/AP hide caption 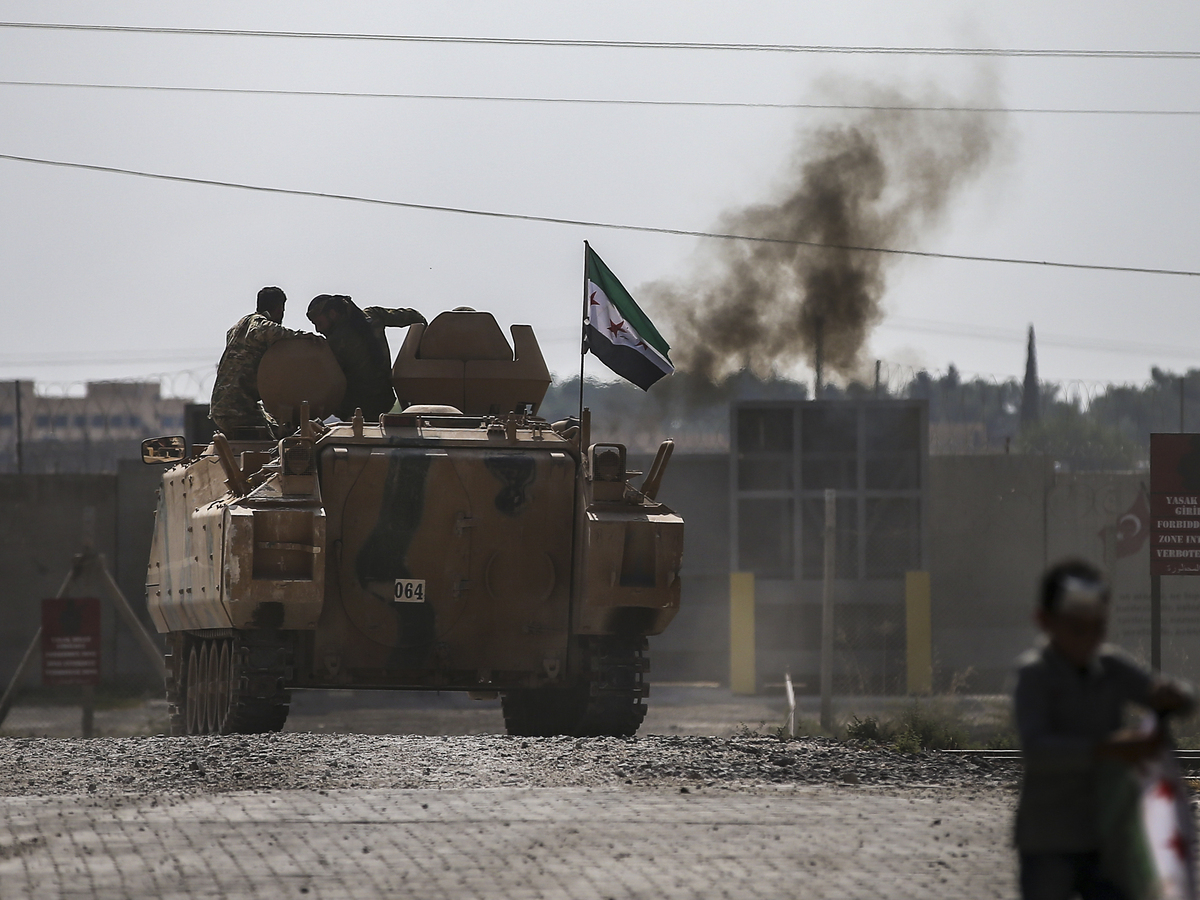 Fighting continued early Friday in a northeast Syrian border town at the center of the fight between Turkey and Kurdish forces, despite a U.S.-brokered cease-fire that went into effect overnight.

A U.S.-brokered deal with Turkey to pause its campaign against Kurdish fighters in northern Syria appears to be largely holding on its first day, though there have been reports of continue Turkish shelling in a key border town, Ras al-Ain.

"The city is still being bombed despite an agreement made yesterday," Sozda Rakko from the Kurdish Red Crescent tells NPR's Jane Arraf. Rakko says a hospital was bombed and there were clashes near the hospital. "A team of doctors go to the city this morning to get civilians out of the city, of course, but the Turkish army don't let them," she said.

Some 200 vehicles carrying medical materials are waiting to enter the town, according to the Syrian Observatory for Human Rights.

A spokesperson for Turkish-backed forces described the fighting around the hospital as "minor clashes," NPR's Daniel Estrin reported. Kino Gabriel, a spokesperson for the Kurdish-led forces, said in a statement that 13 of their fighters and five civilians were killed in Turkish attacks since the deal was announced.

"We reiterate that we will not refrain from using our right to legitimate self defense in case of any attack by Turkish-backed militias," Gabriel said.

President Trump said he spoke with Turkish President Recep Tayyip Erdogan Friday, who told him "there was minor sniper and mortar fire that was quickly eliminated."

The deal was reached Thursday after more than five hours of negotiation between Erdogan and Vice President Pence. It allows 120 hours for Kurdish YPG fighters to withdraw from the "safe zone" along Turkey's border with Syria, without explicitly stating the size of the zone. After that safe zone is cleared, Turkey's military operation will be completely halted, the agreement says.

Pence Says Turkey Has Agreed To Suspend Its Incursion Into Syria

The YPG fighters have been crucial allies of the U.S. for years in the fight against ISIS. Turkey considers them terrorists linked to organizations inside Turkey that carry out attacks against the Turkish government.

On Friday, Erdogan stressed that Turkey is prepared to continue to fight.

"If the United States is able to keep the promises it gave us by Tuesday night, at the end of the 120-hour period, the issue of a safe zone will have been resolved," the Turkish president said, according to The Associated Press. "But if this promise is not kept, without exception, the minute the 120 hours end, our Operation Peace Spring will resume from where it left off in an even more determined way."

The U.S. has promised not to impose new sanctions on Turkey and to lift other sanctions imposed recently once the Turkish military operation is completely halted.

It's not clear whether the Kurdish forces are actually withdrawing from the border. Kurdish military leader Mazlum Kobani said Thursday that the forces would comply with the cease-fire.

Jack Keane, a retired four-star general and informal adviser to Trump, has also been in communication with Kobani. "He does agree to move his YPG forces from the two contested towns some 30 miles to the south," Keane tells NPR. "He does not agree — and he's adamant — that he has no intention to move all of the Syrian Kurds away from the border."

Keane adds: "That would be hundreds of thousands of people and that would be an incredible humanitarian operation." He says that Kobani has requested U.S. air cover for his forces as they move south. "He wants to make certain that the roads he's using to move south are not going to be interrupted and put his convoys at risk."

But the U.S. does not appear to have a significant role on the ground. U.S. forces had been in the process of withdrawing from northern Syria when the deal was announced. U.S. forces even bombed their main military base there to destroy any remaining ammunition. In a statement Friday, Secretary of Defense Mark Esper said that "no U.S. ground forces will participate in the enforcement of this safe zone," but they will "remain in communication" with Turkey and Kurdish forces.

The U.S. pullout raises concerns about whether this will provide room for ISIS to regain a foothold in the area. Esper and Joint Chiefs Chairman Mark Milley held closed-door meetings on Capitol Hill on Friday. A U.S. official told NPR's Tom Bowman that they said they are still formulating a plan to keep the pressure on ISIS, because U.S. ground forces are leaving.

"Actually the deal gives Turkey everything it wants," Estrin reported. The Turkish government wants to clear the area of Kurdish fighters and resettle up to 2 million Syrian refugees there.

The deal itself is drawing criticism from major international players such as European Council President Donald Tusk. As the AP reported, he described it as "not a cease-fire; it is a demand for the capitulation of the Kurds."

Reporters' Notebook: The Moment Everything Changed In Syria

The Turkish offensive began after Trump suddenly announced the withdrawal of U.S. forces from the area last week, following a call with Erdogan. The shift in policy drew swift criticism from U.S. lawmakers in both parties.

"It was unconventional what I did," Trump said at a rally on Thursday. "I said, they're going to have to fight a little while. ... Like two kids in a lot, you've got to let them fight and then you pull them apart."

Brett McGurk, Trump's former envoy for the global coalition to counter ISIS, called that "an obscene and ignorant statement."

"The reality is that we are now leaving Syria in the most shambolic way imaginable," he said in an interview with NPR. He said that by leaving Syria, the U.S. has forfeited much of its ability to influence the situation on the ground.

"I think the Americans, at this point, are a sideshow," McGurk said. "And I think anyone who thinks that we can meaningfully control or influence this situation is mistaken. We might be able to buy some pauses here and there, but this will now be worked out by other powers as we evacuate the country."

More than 170,000 people have been displaced since the offensive started, the U.N. says. And a large number are streaming over Syria's border with Iraq — Arraf says that in the past week, more than 2,000 have crossed the border fleeing the fighting.