Accessibility links
Impeachment Inquiry Update: What The Week Revealed About The Ukraine Affair. President Trump commissioned Rudy Giuliani as his top guy for Ukraine, and the White House also appointed "three amigos" to carry out its policy. The administration says nothing's wrong here. 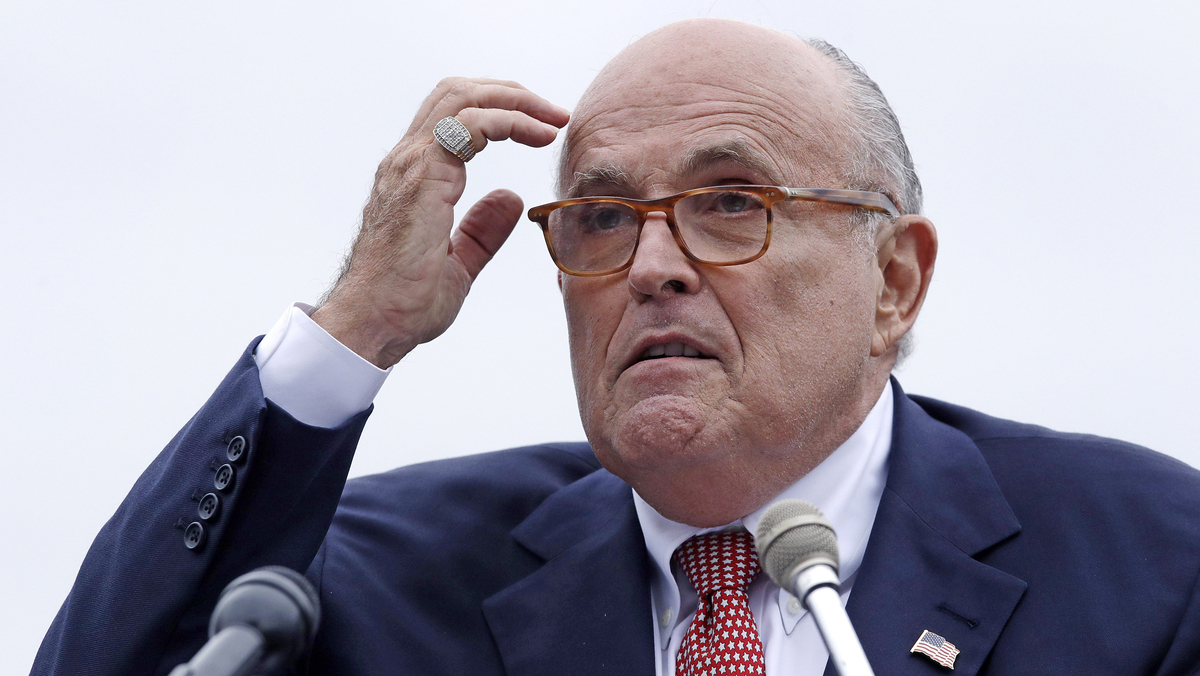 National security and foreign policy officials were asked to work with Trump personal lawyer Rudy Giuliani on relations with Ukraine.

President Trump deputized lawyer Rudy Giuliani to run a shadow foreign policy for Ukraine outside the State Department, witnesses told Congress this past week — and the White House said people should "get over it."

It has been a busy week. Here's what you need to know about the latest in the Ukraine affair and the impeachment investigation.

Giuliani has been an important figure in Trump world for years, but what investigators heard was how central he was in the plan to get Ukraine's government to launch investigations that Trump wanted.

Trump wanted Ukraine's new government, led by President Volodymyr Zelenskiy, to investigate a conspiracy theory of Trump's about the 2016 cyberattacks on the Democratic National Committee and the family of former Vice President Joe Biden, ostensibly over "corruption."

In exchange, it appears, Trump was prepared to engage with Zelenskiy and continue the flow of military assistance, appropriated by Congress, that had been flowing to Kyiv since it was invaded by Russia in 2014.

Although Trump may not have told many officials about that plan in real time, Trump did ask early on for many of them to work with Giuliani in their dealings with Europe and with Ukraine, the witnesses said. 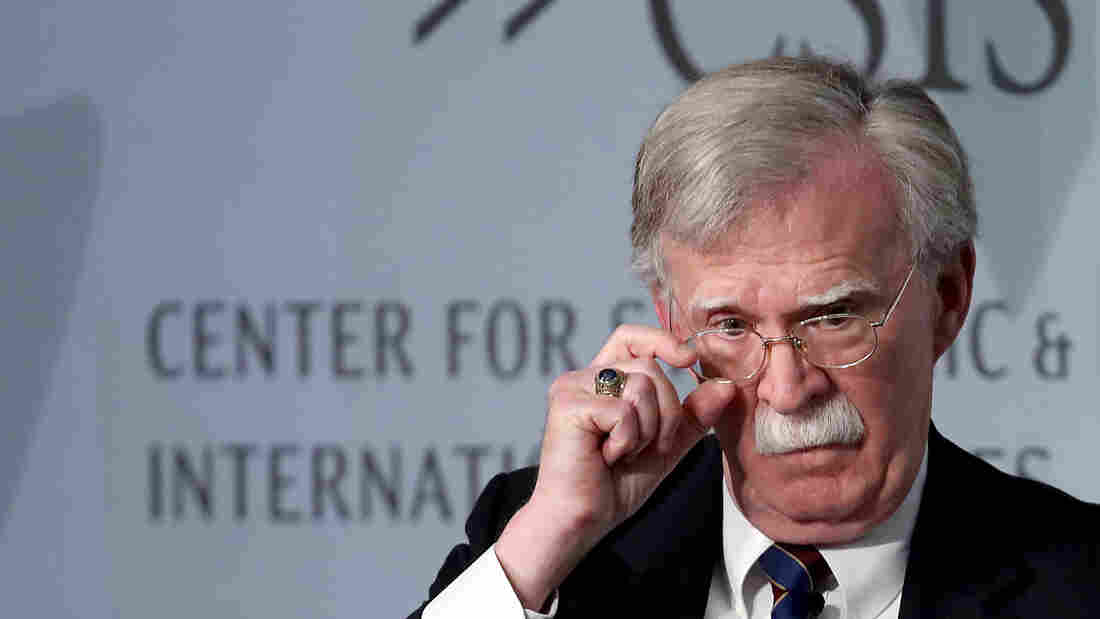 Congress was told that onetime U.S. national security adviser John Bolton warned that Rudy Giuliani was a "hand grenade" in danger of blowing up and hurting everyone around him. Win McNamee/Getty Images hide caption 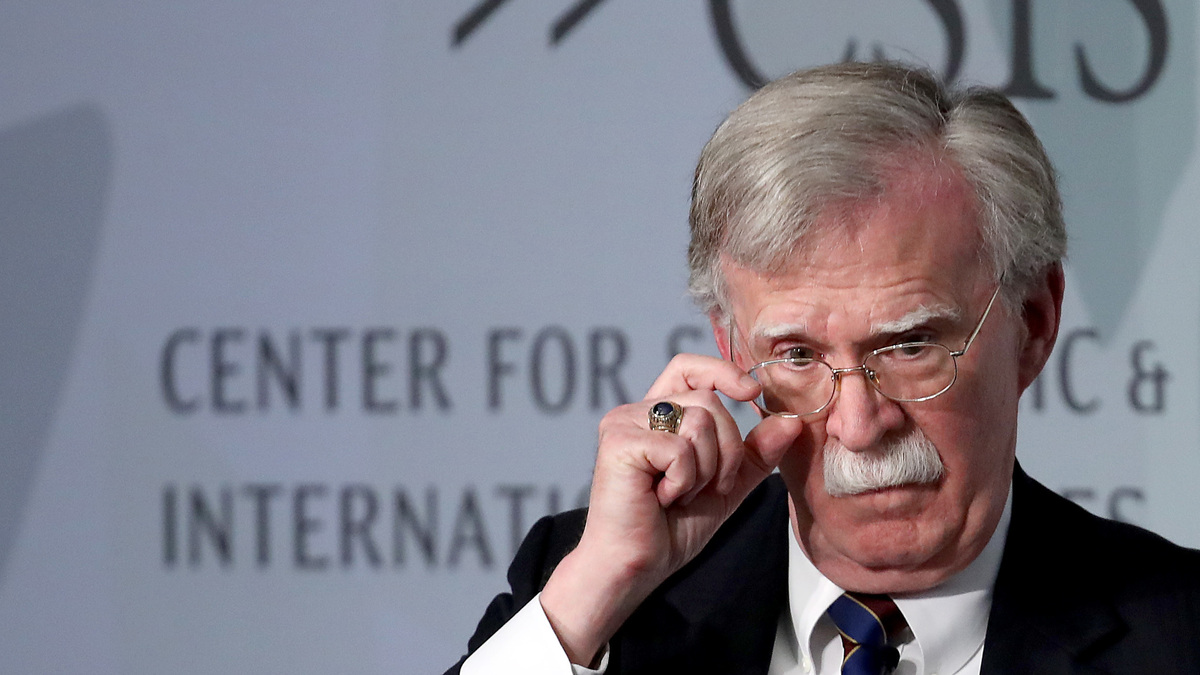 Congress was told that onetime U.S. national security adviser John Bolton warned that Rudy Giuliani was a "hand grenade" in danger of blowing up and hurting everyone around him.

Top aides including then-national security adviser John Bolton and Trump's former top Russia adviser, Fiona Hill, may have worried about the Ukraine pressure strategy on its merits. Ukraine is a U.S. ally resisting a military incursion by an adversary, its neighbor Russia.

Because the depositions are closed, it still isn't fully clear what witnesses have told Congress.

But what has become clear is how unhappy the national security and foreign policy professionals were at being asked to involve someone they viewed as an interloper in Giuliani.

Bolton warned he was a "hand grenade" in danger of blowing up and hurting everyone around him, Hill told members of Congress, according to people familiar with her testimony. She also was said to have flagged concerns within the National Security Council about what she considered departures from official process.

People still within the administration, however, also are said to resent what they considered the interference represented by Giuliani — along with what may have been incomplete awareness in real time about what Trump was orchestrating with U.S. policy toward Ukraine.

Three top current and former State Department officials — Michael McKinley, George Kent and the U.S. ambassador to the European Union, Gordon Sondland — are understood to have told House investigators they thought foreign policy should be conducted by diplomats and professionals.

McKinley said he resented the scourging — led by Giuliani — of then-U.S. ambassador to Ukraine Marie Yovanovitch, which resulted in her being discredited inside the administration and withdrawn from Kyiv prematurely.

Members of Congress earlier reviewed materials submitted by a State Department whistleblower that were described as "propaganda" about Yovanovitch that led to her ouster. She testified on Oct. 11.

Why did Trump sideline the diplomats? 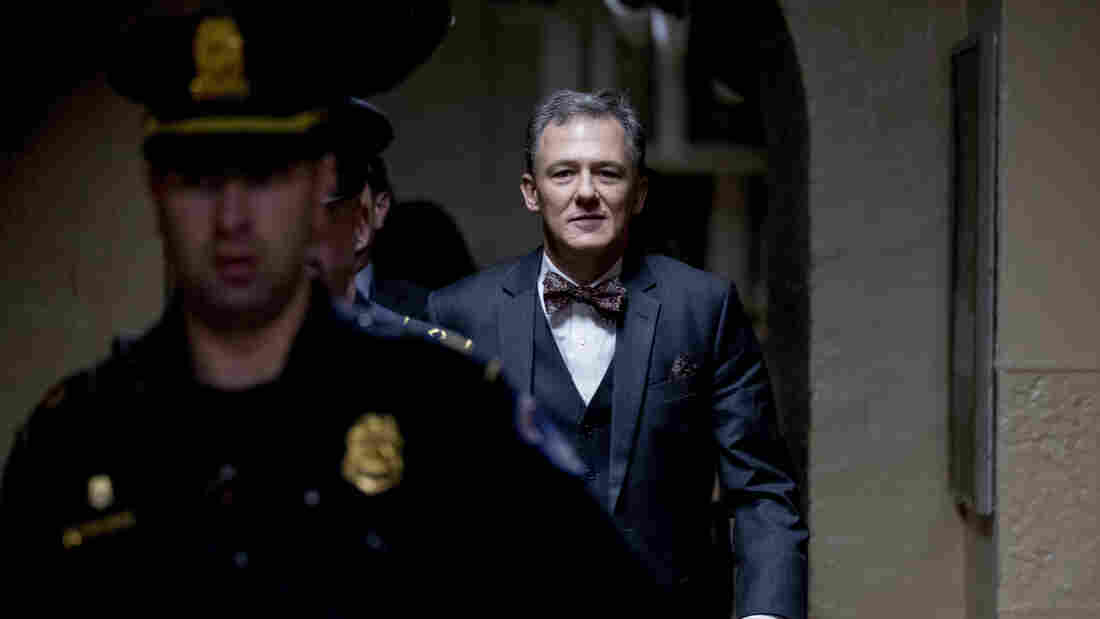 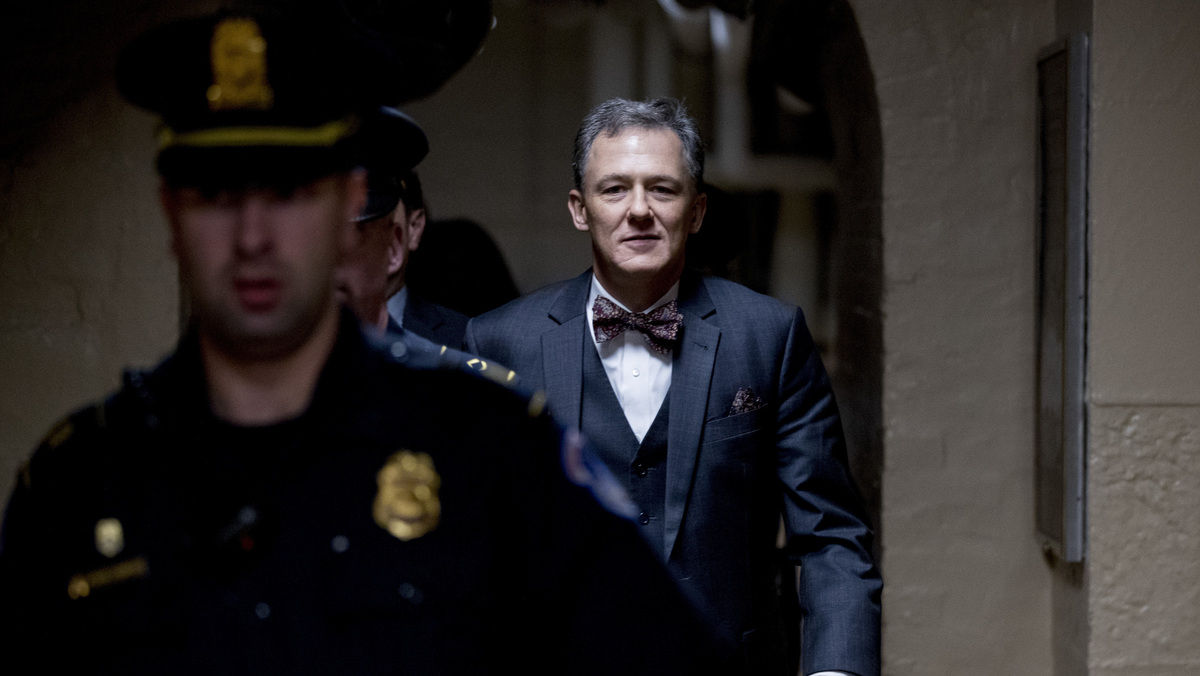 Deputy Assistant Secretary of State George Kent leaves Capitol Hill on Tuesday after testifying before lawmakers as part of the House impeachment inquiry.

Kent told members of Congress that the White House wanted a reliable cadre of "three amigos" handling the Ukraine portfolio, according to one account of his testimony given by Rep. Gerry Connolly, D-Va.

If correct, this suggests the president or Giuliani did not consider Yovanovitch, Hill or others trustworthy enough as the White House was shaping its pressure campaign for Ukraine.

Sondland talked to Congress on Thursday. Volker appeared on Oct. 3.

Perry has been subpoenaed, but it isn't clear whether he'll appear. He said on Thursday that he's resigning at the end of this year. Trump has reportedly credited — or blamed — Perry for the call with Zelenskiy.

Many details still aren't clear and accounts differ as to who decided what and when or communicated which version of events. The public could get a clearer picture if and when members of Congress release the full transcripts of the depositions they've been conducting with the witnesses.

Get Caught Up: 4 Big Questions About The Trump-Ukraine Affair

According to an anonymous intelligence community whistleblower, whose complaint about the pressure scheme was what animated this saga, Ukraine's president was primed before his July 25 call with Trump about the need to "play ball" with Trump's requests for the investigations.

Investigators want to know who primed him and how. This week brought more of that into focus. Giuliani, Volker and Sondland all are known to have been in touch with Zelenskiy or people in his camp.

But what Sondland told Congress was that he was kept in the dark about the full dimensions of Trump's plans for Kyiv. Once he and the others learned military assistance to Ukraine had been frozen, Sondland said he opposed the picture he was piecing together.

Who knew what when

Sondland's account is important for two reasons: First, he told members of Congress that the account he was given of Trump's call with Zelenskiy did not mention the request for investigations about the Democrats' server or Biden.

That suggests, if correct, that the White House was hiding those details even from members of its own administration handling Ukraine.

Second, it's important for Sondland's sake because he's the one who sent a text message — among those released earlier by Democrats — that declared to other diplomats dubious about the Ukraine pressure scheme that Trump had made clear it was not a quid pro quo.

What Sondland told members of Congress on Thursday was that as he and others within the State Department realized that Trump expected concessions from Zelenskiy and then had frozen the military aid, Sondland phoned Trump to ask personally about what they were doing.

In what Sondland described as a brief conversation with a grouchy Trump, the diplomat recalled the president repeating the words "no quid pro quo with Ukraine."

Sondland reportedly was prepared to tell House investigators that all he was doing in his subsequent text message was conveying to the others what Trump had said, not validating or endorsing that position.

The question about a "quid pro quo" is important in case there are legal issues for the diplomats involved, Giuliani or, theoretically, Trump — although one lesson from the Russia imbroglio was that Trump needn't worry about indictment by the Justice Department.

That's why some Democrats argue their only recourse now is the quasi-legal, mostly political — and historically rare — path toward impeachment.

What also makes the Ukraine affair unusual in the pantheon of Washington scandals is how quickly the facts about it flashed into public view and how readily the White House has acknowledged so many of them.

Mulvaney, the acting chief of staff, told reporters on Thursday that, yes, Trump expected concessions from Zelenskiy in exchange for engagement with the United States — but that's how this game is played, he said.

And as for what Mulvaney called the complaints by the State Department and national security officials about Trump giving the Ukraine portfolio to Giuliani, he called it sour grapes by jealous bureaucrats.

The administration works for the president, all foreign policy is political and everyone, Mulvaney said, needs to "get over it."

Trump's campaign later put that epigram on a T-shirt.

Mulvaney later sought to walk back some of what he said in his press conference — specifically that Trump's request that Zelenskiy investigate the Democrats' "server" was a "quid pro quo."

But the words already were out in the open, and another point he made also endures: The Ukraine affair, for everything else it is, isn't a cover-up.

The investigation wears on

Republicans have faulted the impeachment inquiry as illegitimate and White House counsel Pat Cipollone vowed that the administration wouldn't participate in it — but the stream of witnesses into the Capitol hasn't slowed.

Although Cipollone's objections may mean that members of Congress don't hear from some of the boldfaced names they might request, including Pompeo, Bolton, Giuliani and Vice President Pence, investigators do have a full dance card.

Starting on Tuesday, House investigators are scheduled to hear from the current top U.S. diplomat in Ukraine, Bill Taylor, who took over the mission to Kyiv after Yovanovitch was withdrawn and whose texts were among those released earlier.

On Wednesday, the House is scheduled to hear from another State Department official, Ambassador Philip Reeker, as well as Michael Duffey, associate director for national security programs within the Office of Management and Budget.

On Thursday, investigators are set to take depositions from Deputy Assistant Secretary of Defense Laura Cooper and Lt. Col. Alexander Vindman. And that's not all, according to one official working on the impeachment inquiry.

"The committees are in ongoing discussions with other witnesses, and we look forward to their testimony," the official said.

A previous version of this story misspelled Marie Yovanovitch's last name as Yovanovich.