Accessibility links
Interview: George R.R. Martin, Creator Of 'A Song Of Ice And Fire' Martin, who's working on the long-awaited sixth volume of his series A Song of Ice and Fire, rarely gives interviews — but NPR's Scott Simon recently caught up with him onstage at an awards ceremony. 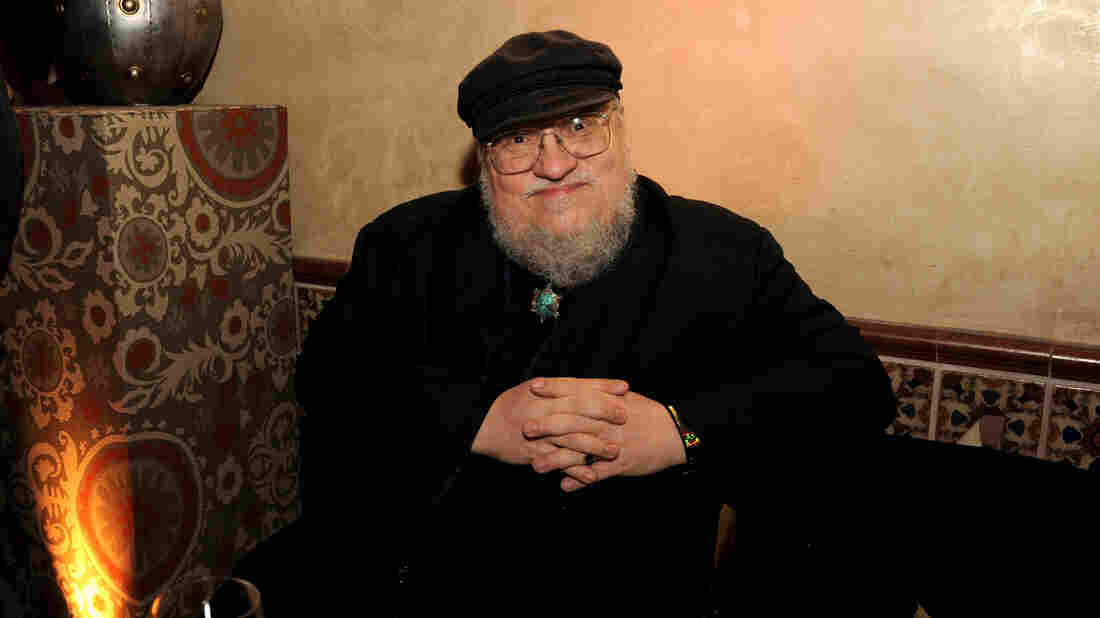 George R.R. Martin attends a 2013 afterparty for HBO's Game Of Thrones, which was adapted from his epic fantasy series, A Song of Ice and Fire. Kevin Winter/Getty Images hide caption 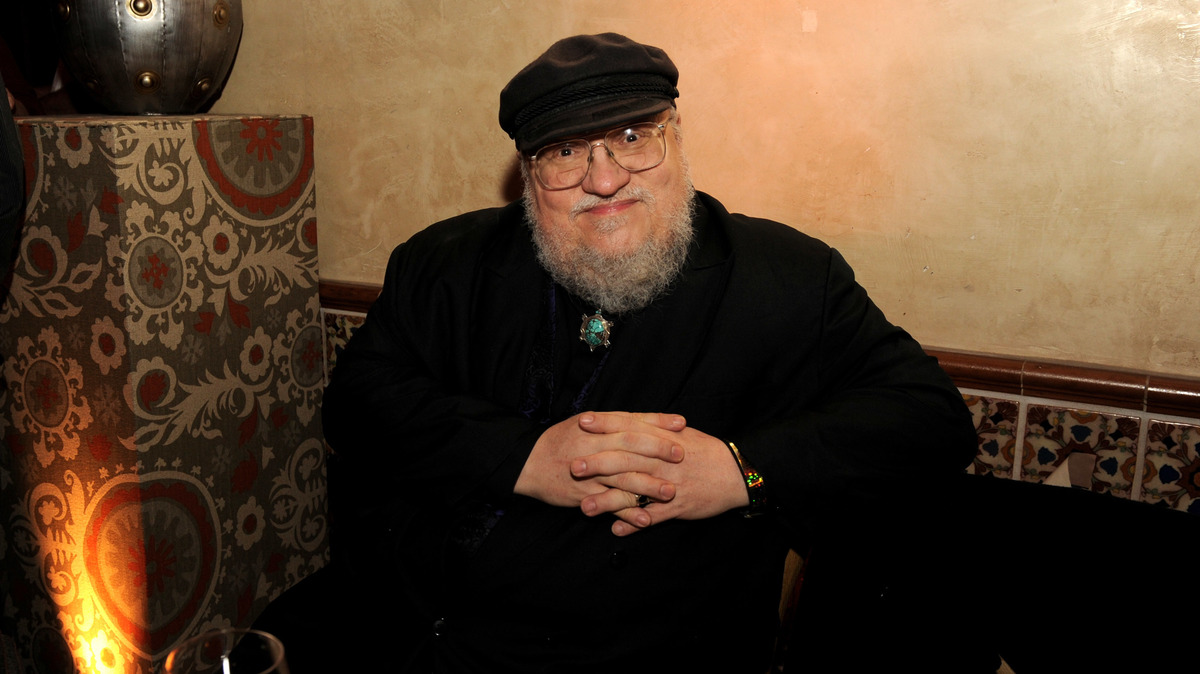 George R.R. Martin attends a 2013 afterparty for HBO's Game Of Thrones, which was adapted from his epic fantasy series, A Song of Ice and Fire.

George R.R. Martin has sold more than 90 million books around the world. He has written all kinds of things, but of course, he's best known for his epic fantasy series, A Song of Ice and Fire — which was adapted into HBO's Game of Thrones. His fans are impatient, even demanding, for him to finish the next installment. The most recent, A Dance with Dragons, appeared more than eight years ago.

Because he doesn't like to be asked when the next volume will appear, Martin doesn't do a lot of interviews — but I got to speak with him last week onstage when he received the Chicago Public Library Foundation's Carl Sandburg Literary Award.

George R.R. Martin Admits 'Winter' Isn't Coming — At Least, Not For A While

Martin told me the icy apocalypse that's central to A Song of Ice and Fire was inspired by his freshman year at Northwestern University. "I guess this was early in '67, and they had this incredible snowstorm, and the snow was so thick I got lost on this campus that I'd walk every day. You couldn't see the buildings, you couldn't see 5 feet in front of you, the snow was just coming down so heavily, and by the time the snowstorm stopped — I was on the first floor, the windows were completely covered. Then it froze and it didn't melt for days, weeks ... And we would go out of the dormitory, and we would be in a trench with walls above our head of snow and ice. It was like a transformed world. And I think that got its fingers into my memory somehow and may have had some influence when I started writing about the Wall in Westeros and the men of the Night's Watch."

On how he keeps track of his expanding character count 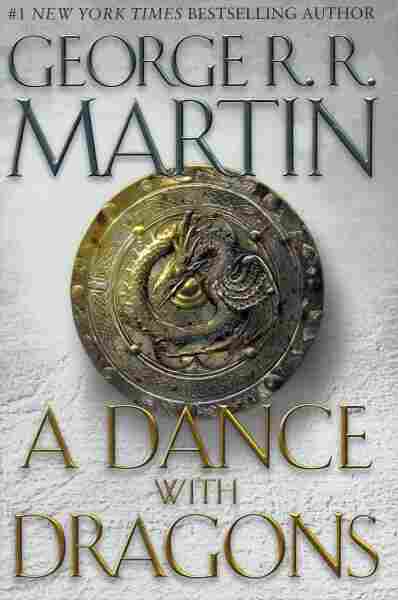 A Dance With Dragons

With increasing difficulty. I often say that there are two types of writers: architects and gardeners. We had an architect here who was one of the authors who came up, I'm sure that he plans all of his buildings well in advance before he starts building them. He draws a blueprint, and he knows what they're going to be made of, and how many stories there are going to be, where the bathrooms will be, and how they'll be heated, and what the roof will be made of — everything before they even dig the foundation. That's the way the architect writers work. They plan the novels out in advance, what's going to be everywhere, every turn, every twist, everything, they have these very detailed outlines.

And then there are the gardeners, who dig a hole, and they plant a seed and they water it — in the case of writers, with their blood and their tears and their sweat — and they hope that something comes up. And they have a general idea — they know whether they planted an acorn or a tomato plant. But there's lots of surprises. Sometimes it doesn't come up at all, or it comes up and dies. And sometimes it gets very wild. And that's me, I'm much more a gardener than an architect. In that way, I'm like J.R.R. Tolkien and others — it's not the most efficient method of writing ... but it's worked for me all my life, so I'm probably going to keep continuing doing it that way.

On the violence in his books

I still have two more books to do, and I want to finish it strong. So people look at it and say, you know, this entire thing is an important work, not a half-finished or broken work.

I grew up in a time, in the '50s, of fundamentally dishonest presentations of violence on television. You know, I thought like gunfights in the Old West — people drew and then one guy fell down and was dead. You know, I had no idea of the actual impact a bullet can do when it enters someone's skull or someone's chest. If you're going to write about violence and killing, then I think you should present that honestly with all the gore, and people screaming for their mother as they die with their entrails sprawling out in the mud. Don't pretty it up — and the same thing is true of the sexual violence, which was one thing that my books have been sometimes criticized for. I've read a lot of history. That was my minor in college, when journalism was my major. As far as I know, every war in human history has included rape — just because you include dragons doesn't mean the whole thing should be removed from our human experience that we know about.

On whether it's difficult to have millions of people waiting for The Winds of Winter, the next volume of A Song of Ice and Fire

Yes, especially because a certain portion of them are really impatient and snarky about it. You know, you can get one person who posts 150 messages in three days, all of which is "Where is Winds of Winter?" If any of you go home and post on your Twitter account, "Hey I was just at the Chicago Public Library Sandburg Award dinner and George R.R. Martin was there," you know by the third message someone will say, well, "What the hell is he doing there? Where is Winds of Winter?" So at this point, it is what it is. And, you know, I should probably leave right now and go back [to] writing Winds of Winter.

It's very important me to finish A Song of Ice and Fire. I want to finish it. I still have two more books to do, and I want to finish it strong. So people look at it and say, you know, this entire thing is an important work, not a half-finished or broken work. I know some of the more cynical people out there don't believe that, but it is true.

This story was edited for radio by Samantha Balaban, and adapted for the Web by Petra Mayer

Read an excerpt of A Dance With Dragons