Accessibility links
When Snakes Slither Into Bangkok Homes, This Is The Wrangler Who Gets Rid Of Them When pythons, cobras and pit vipers show up, Pinyo Pukpinyo, a sergeant in Bangkok's fire department, is the expert who catches them. He's been bitten 20 times but says his work "makes me happy." 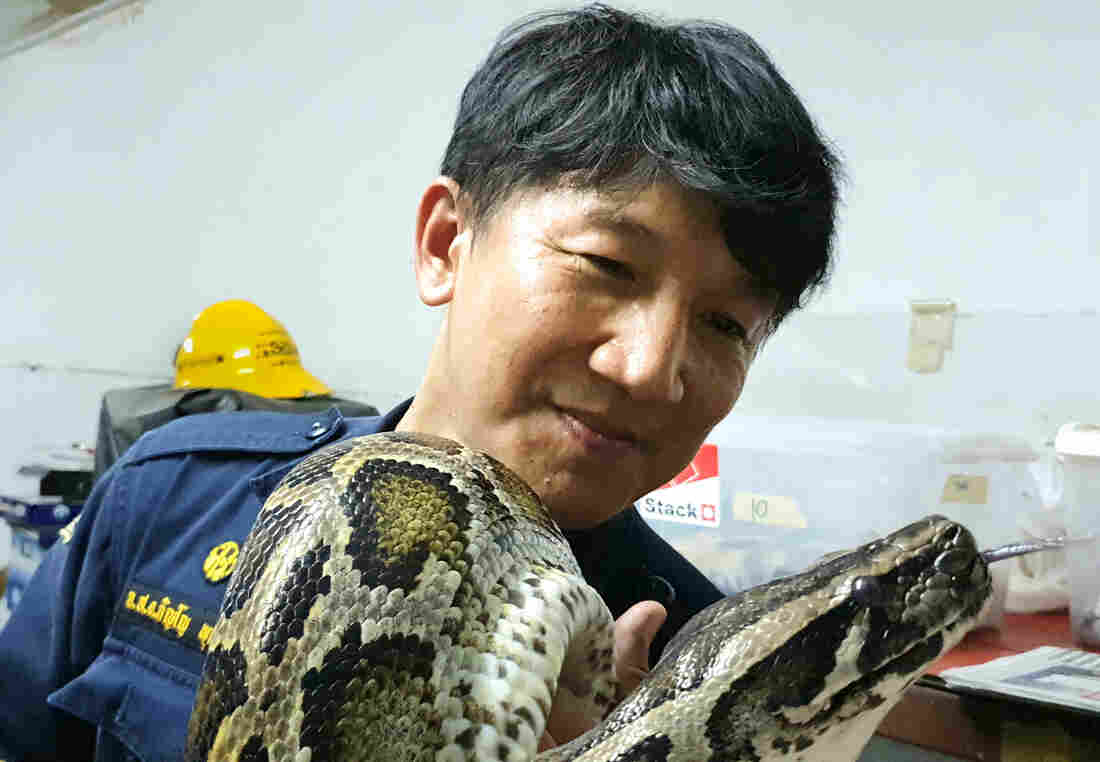 Firefighter Pinyo Pukpinyo holds a Burmese python. In 16 years of snake wrangling, he says he has been bitten more than 20 times but helping people desperate to get rid of snakes in their homes "makes me happy." Michael Sullivan for NPR hide caption 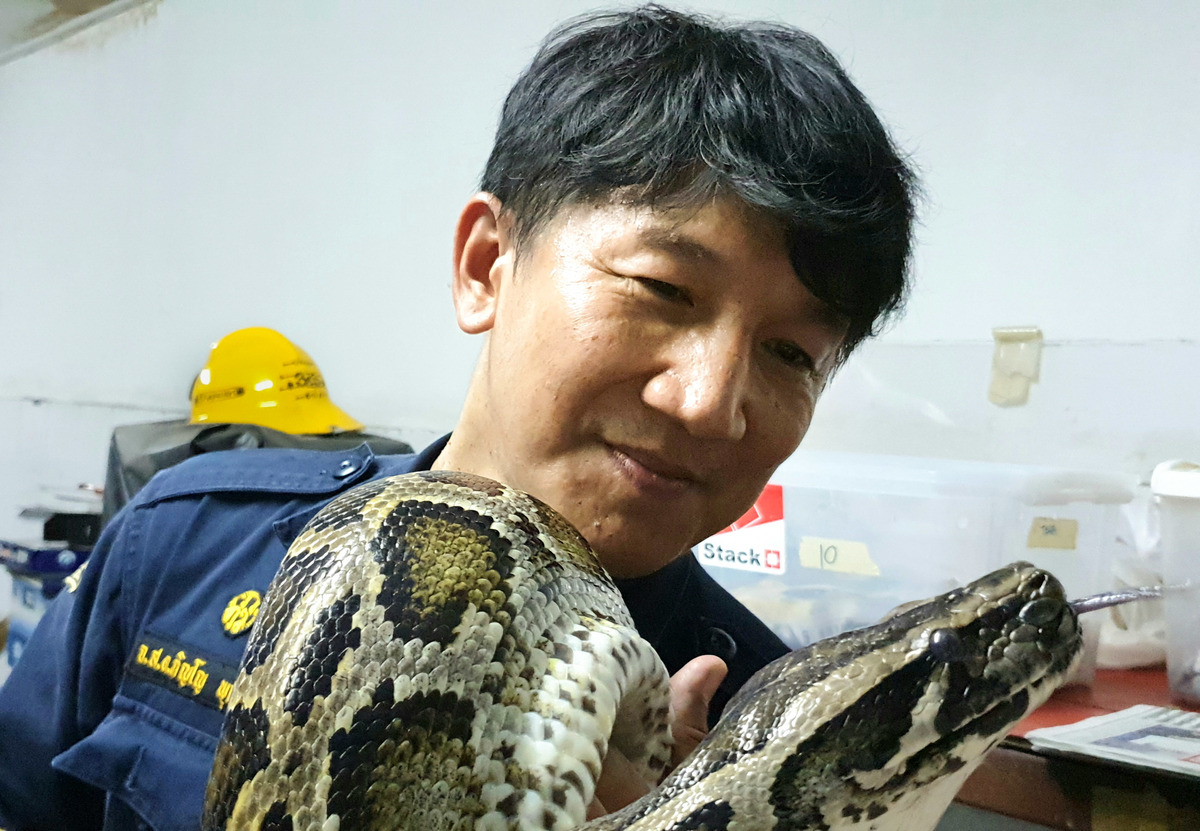 Firefighter Pinyo Pukpinyo holds a Burmese python. In 16 years of snake wrangling, he says he has been bitten more than 20 times but helping people desperate to get rid of snakes in their homes "makes me happy."

Pinyo Pukpinyo, 50, remembers the first time he was sent to remove a snake from someone's house. It was a 14 1/2-ft. python, high up in the rafters waiting for its prey 16 years ago.

"There were four of us, and I was really scared," he says. "We didn't have any experience, but we wrestled him down and got the hoop around his neck" — a kind of snare — "but he was very strong. And after we put him in the sack, we had to remove the hoop from his head, and that's the dangerous part, because at any time he's ready to bite you."

This one didn't — though by Pinyo's count, he's been bitten over 20 times since, mostly by pythons, which are non-venomous but can still hurt.

He's also been bitten by a king cobra and a pit viper, which are venomous. Both were "dry bites," in which no venom was released. But he says each one was a learning experience on how not to get bitten the next time. 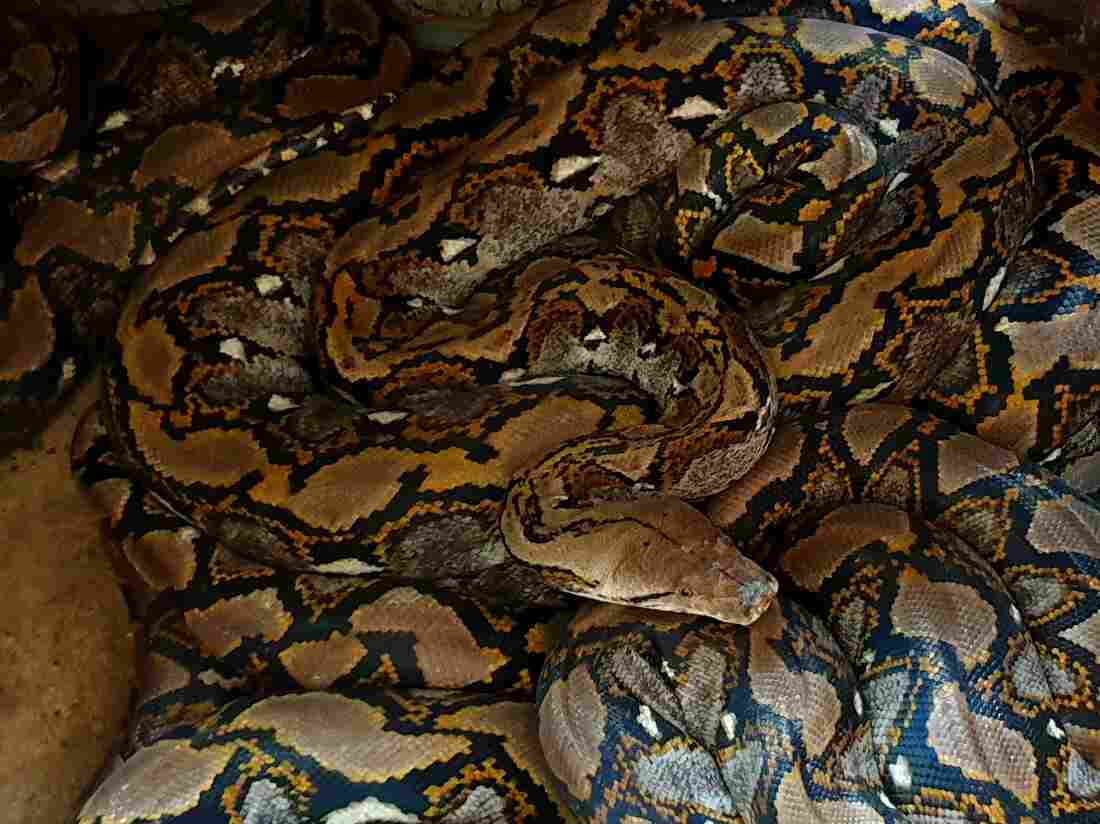 Reticulated pythons are stored in a fire station after being captured. After two weeks, snakes are released into the wild. Michael Sullivan for NPR hide caption 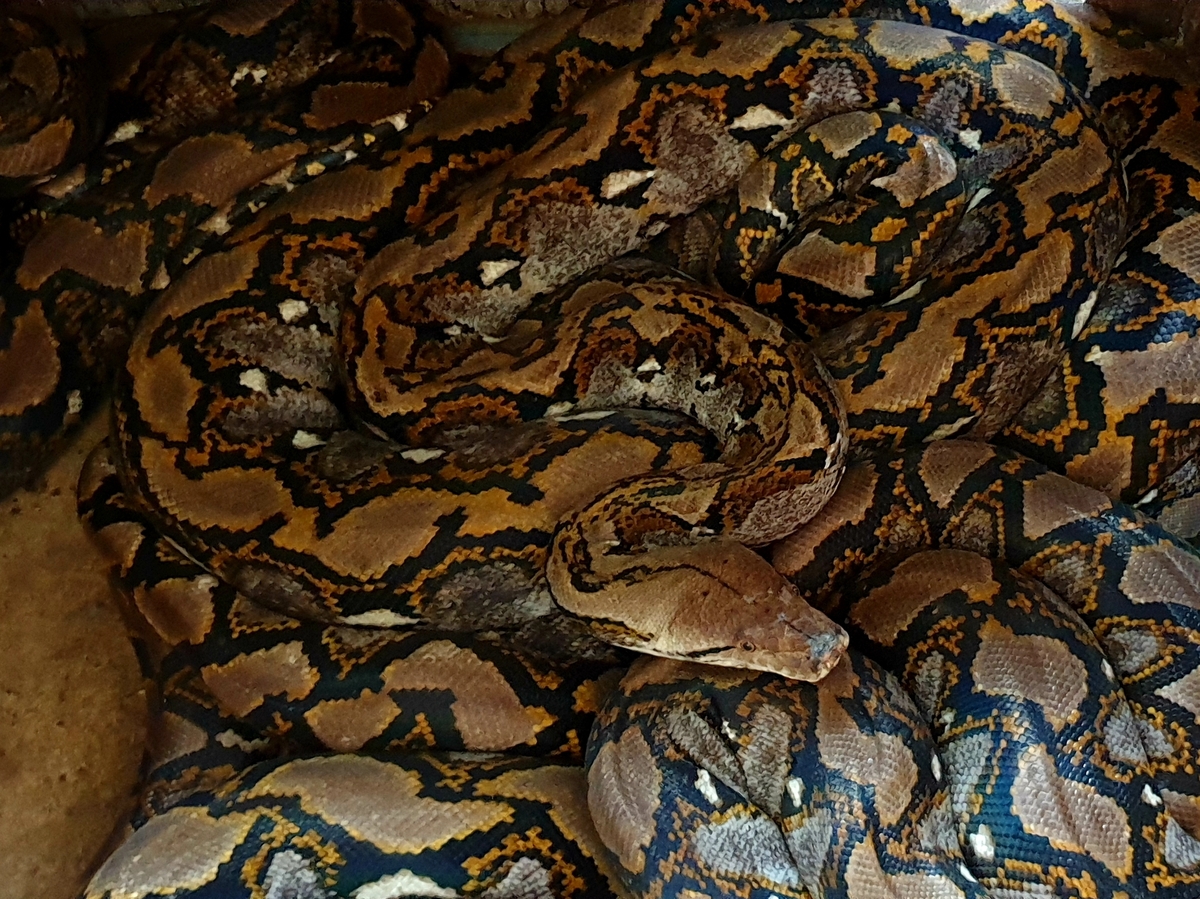 Reticulated pythons are stored in a fire station after being captured. After two weeks, snakes are released into the wild.

Pinyo is a sergeant in Bangkok's Fire and Rescue Department, and its chief snake wrangler. He's been with the department for 30 years. He says he has "rescued" about 8,000 snakes since the fire department started answering snake removal calls in 2003. In the past three years, the number of calls to the fire department have climbed steadily — so much so that in the rainy season in particular, Bangkok's firefighters spend more time answering snake removal calls than fighting fires.

Pinyo says about 70% of the calls are to remove pythons, followed by cobras, pit vipers and banded kraits — the last three species, highly venomous.

So far this year, the fire department has responded to more than 29,000 snake incursion calls from private homes and businesses. Last year, the number was more than 37,000. This is on top of the unknown number of snakes killed or removed every year by homeowners or volunteers.

And yes, the snakes have been known to wriggle their way up through the toilet — even if someone's using it.

Pinyo believes the numbers keep going up because of the relentless pace of construction in Thailand's capital, which severely limits the habitat for snakes in a city mostly built on swampland in the Chao Praya river delta.

"Pythons are local snakes who've been living here in Bangkok for a long time," he says. "Before, there was lots of swamp and bushes where snakes could live. People actually cross the line living in the snakes' area, because we think we're human, and humans are always right."

But the snakes, he says, were there first. And they're hungry. 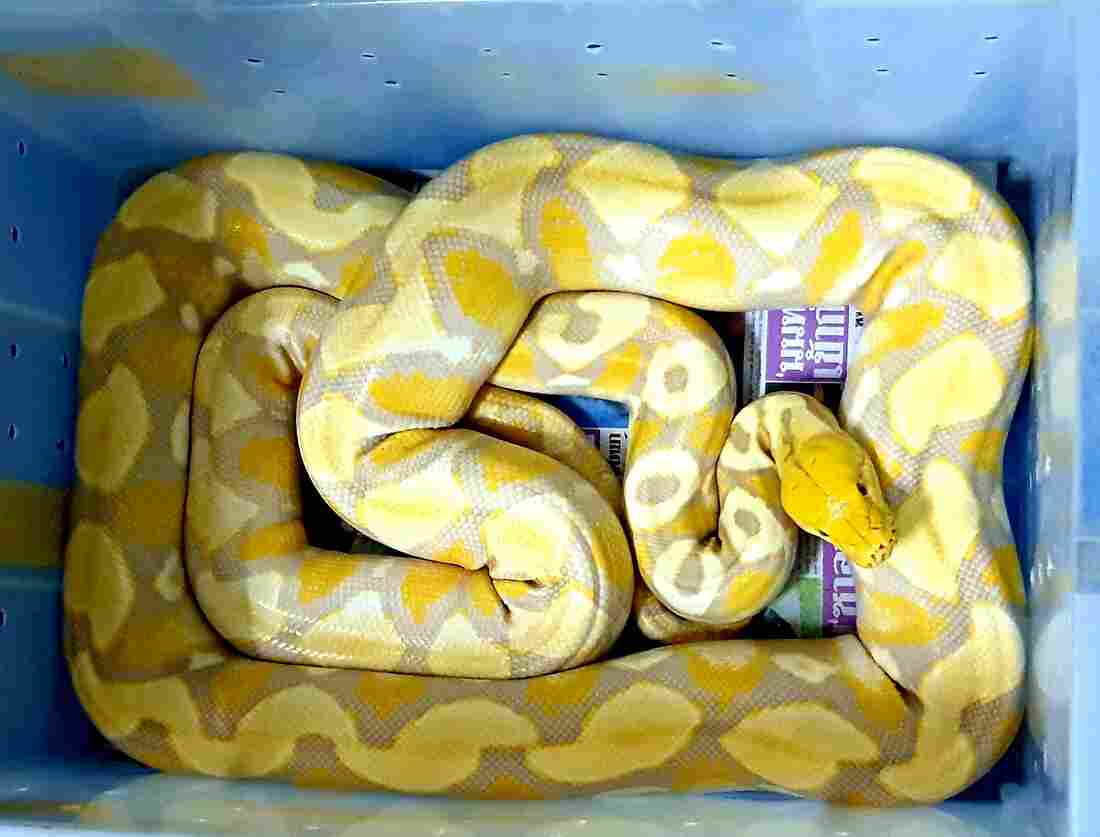 Among a recent haul of snakes in Bangkok was an albino Burmese python. Michael Sullivan for NPR hide caption 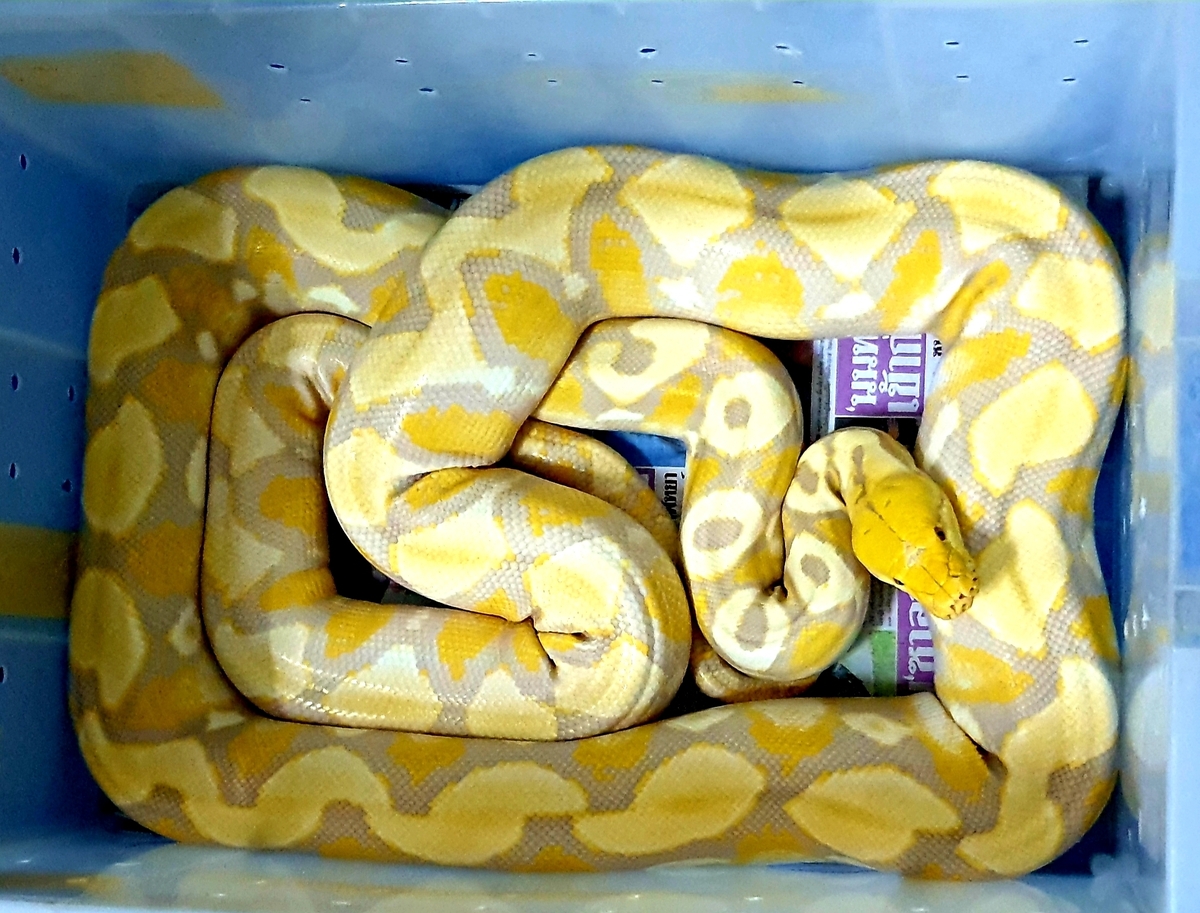 Among a recent haul of snakes in Bangkok was an albino Burmese python.

"One python can hatch 30 eggs at a time," he says. "And those snakes have to eat. That's why they come into the people's living areas."

Bangkok's new airport, Suvarnabhumi, was built in an area called Cobra Swamp. And some cobras have been known to find their way inside the terminal.

Pinyo is clearly comfortable with all of them — which he proves after taking me to a room in back of the Bang Khen fire station near the city's Don Muang airport, where dozens of recently captured snakes are stored. A half-dozen pythons, each 12 to 15 feet long, slither in large metal cages. Cobras, pit vipers and banded kraits are coiled in plastic containers. All of them were brought in the night before. Curled up in a box, there's even a 10-ft. bright yellow-and- white albino Burmese python, which Pinyo says was cross-bred for extra-bright colors.

He picks up a 4-ft. monocled cobra, caught the night before in a nearby house. He grips it effortlessly, just below the head, and brings it within a foot of his face. With the hooded serpent staring at him, and Pinyo staring back, he deftly deposits the snake back into its container.

He says these snakes won't be here for long.

"We keep them here for instruction," he says. "We need real snakes for our demonstrations, to teach [other firefighters] the habits of the snake" and how to catch them without being bitten. Pythons are slow, but they're strong, Pinyo says, while cobras and vipers are fast and deadly. Either way, he says, you have to be careful.

After two weeks, the snakes here are turned over to the Department of National Parks, Wildlife and Plant Conservation, which releases them in the jungle, far from the city. (Venomous snakes are sent first to an institute where their venom is extracted for medical serum).

On a recent day, Pinyo is running behind his usual daily haul of a dozen or so snakes. Riding around in a truck, he listens to the radio, waiting for a call. The first one is a bust — the snake has vanished down a hole in the bathroom floor. As he's leaving that house, Pinyo gets another call about a python in the rafters of a house a 10-minute drive away. He laughs when he hears the address.

"I've been there about 20 times," he says of the two-story, wooden-framed house. "The owner keeps chickens, and the chicken feed attracts mice and that's what the pythons are after."

He once caught a 17-ft. python at this house. Today, he spots a young python slithering along the wall, headed straight for the chicken coop. He grabs it by the tail, yanks it off the wall and cradles it in his arms.

For Wiyada's part, Pinyo is nothing less than a lifesaver. She hates snakes. "Very much!" she says. "They look very scary to me and I'm afraid they're going to bite me. So I'm very happy when Pinyo comes."

She says it rarely takes him more than 10 or 15 minutes to answer her calls. "If I didn't have him, I'd be so stressed."

The two chat a bit more, Pinyo gently stroking the snake on the head as he holds it casually in his arms. Then he stuffs the snake into a bag and it's back into the truck to wait for the next call.

He thinks he'll be back here in "probably less than a week," he says, laughing. But it doesn't bother him. He likes this work a lot more than fighting fires or pulling accident victims from cars.

"In the case of car accidents or fires, you feel very sad when you see people lose people they love, or lose all their belongings," he explains. "But when someone has a snake in their house and they feel desperate and insecure, I can help them. I can get the snake out of the house, and that makes them happy. And it makes me happy, too."