Accessibility links
Justin Trudeau Locked In Tight Race With Andrew Scheer Stung by a series of recent scandals, the prime minister is locked in a virtual tie with Andrew Scheer of the opposition Conservative Party ahead of Monday's election.

Listen · 3:52 3:52
Justin Trudeau Battles For His Political Survival As Canada Gets Ready To Vote 3:52 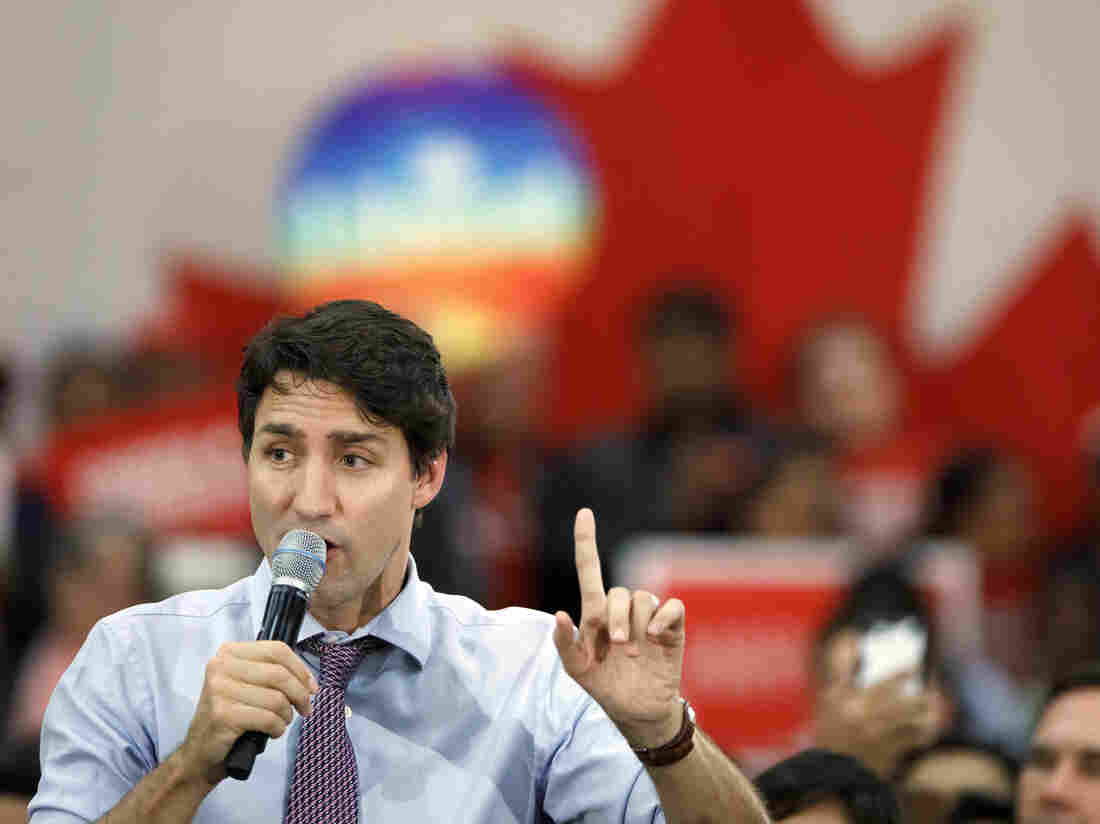 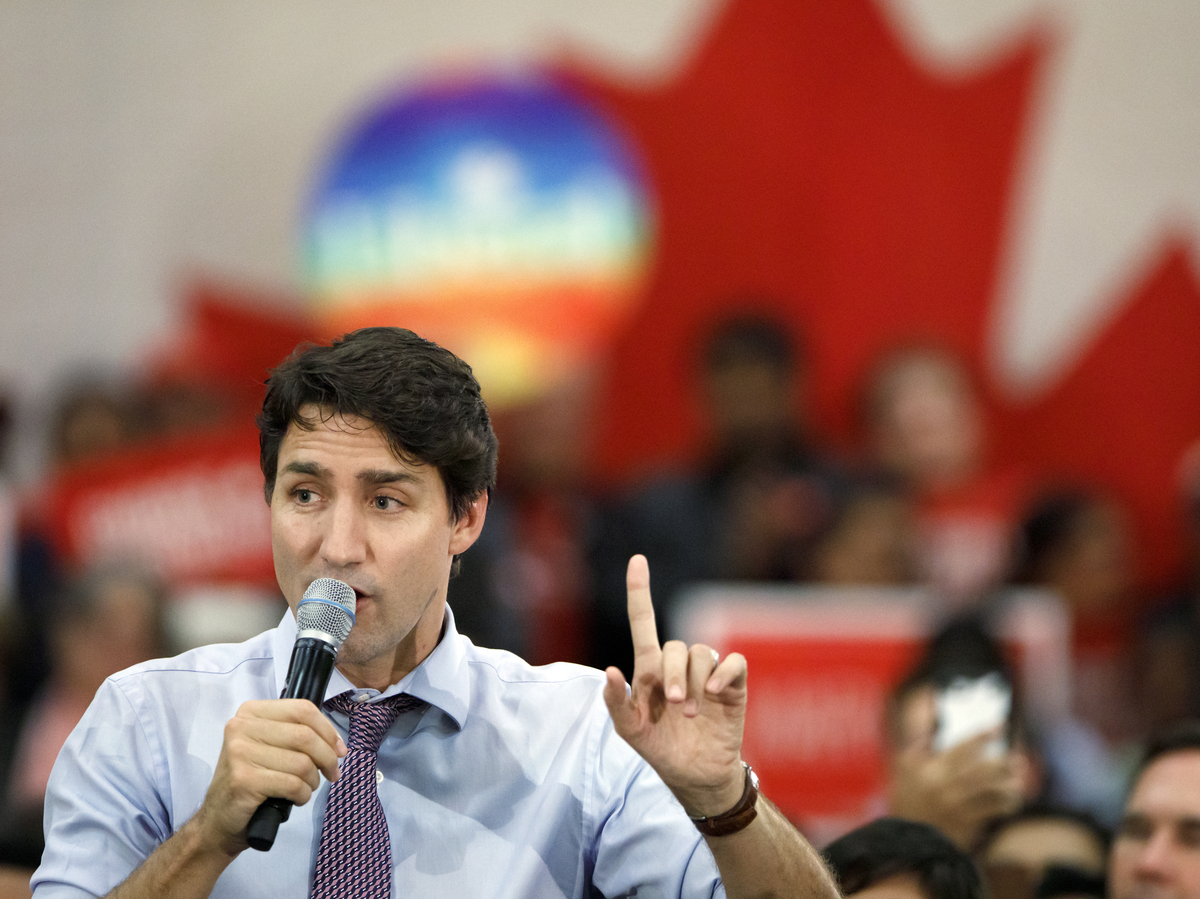 Prime Minister Justin Trudeau speaks to a room of supporters at a campaign rally in Vaughan, Canada, on Friday.

In Canada, campaigning for Monday's election is going down to the wire with Prime Minister Justin Trudeau fighting the battle of his political life.

His rise to power as Liberal Party leader four years ago on a message of hope and change now seems a long way off. He has since been implicated in a series of scandals that have him locked in a virtual tie with the opposition Conservative Party in a race that has some distinctly American overtones.

This past Wednesday, former President Barack Obama endorsed Trudeau, writing on Twitter that "The world needs his progressive leadership now, and I hope our neighbors to the north support him for another term."

I was proud to work with Justin Trudeau as President. He's a hard-working, effective leader who takes on big issues like climate change. The world needs his progressive leadership now, and I hope our neighbors to the north support him for another term.

Trudeau welcomed the endorsement. "I appreciate the kind words and I'm working to keep the progress going," he told reporters in Quebec, the Liberal power base where polls show he is losing support to the separatist Bloc Québécois party.

Andrew Scheer, leader of the opposition Conservative Party, sought to brush the Obama endorsement off altogether, saying, "I've got millions of Canadians behind me. I'm not very interested in what former foreign leaders are saying."

Obama remains hugely popular with Canadians. When he left office, his favorability rating in Canada stood at 81%. Scheer and Trudeau, by comparison, have approval ratings below 35%.

"This is an election in many ways that comes down to which of these candidates is a credible leader, and the answer in most people's minds is none of the above," says Greg Weston, a longtime political columnist and principal at Earnscliffe Strategy Group in Ottawa. "So, when someone as popular as Obama comes in and endorses Justin Trudeau, it could have a significant impact, because a significant impact in a race this close doesn't have to sway a whole lot of voters."

Once a progressive hero, Trudeau's glow has dimmed in recent months. In August, a government watchdog found that he violated ethics law by trying to influence his attorney general to stop the criminal prosecution of SNC-Lavalin, a large Liberal Party-linked engineering firm. Trudeau apologized, saying his motivation was to spare Canadian jobs. Two senior Cabinet ministers quit over the scandal, along with the prime minister's senior political adviser.

Then, in September, there were the revelations that Trudeau dressed in brownface and blackface two decades ago. "It was something that I didn't think was racist at the time, but now I recognize it was something racist to do, and I am deeply sorry," Trudeau said.

Despite the twin scandals, Scheer has struggled to capitalize.

At a rally in suburban Montreal this past week, several hundred Conservative supporters filled a ballroom to listen to him push his message of fiscal responsibility.

"We have a plan to get back to balanced budgets over a responsible period of time so we can stop borrowing billions and billions," he told the receptive crowd.

Scheer is tall, unassuming and from middle-class roots. He is, in many ways, the opposite of Trudeau, the outgoing, telegenic son of a wealthy political dynasty.

A devout Catholic and a married father of five, Scheer is a career politician. He was first elected to Parliament at the age of 25 and then became the youngest speaker of the House of Commons at age 32. 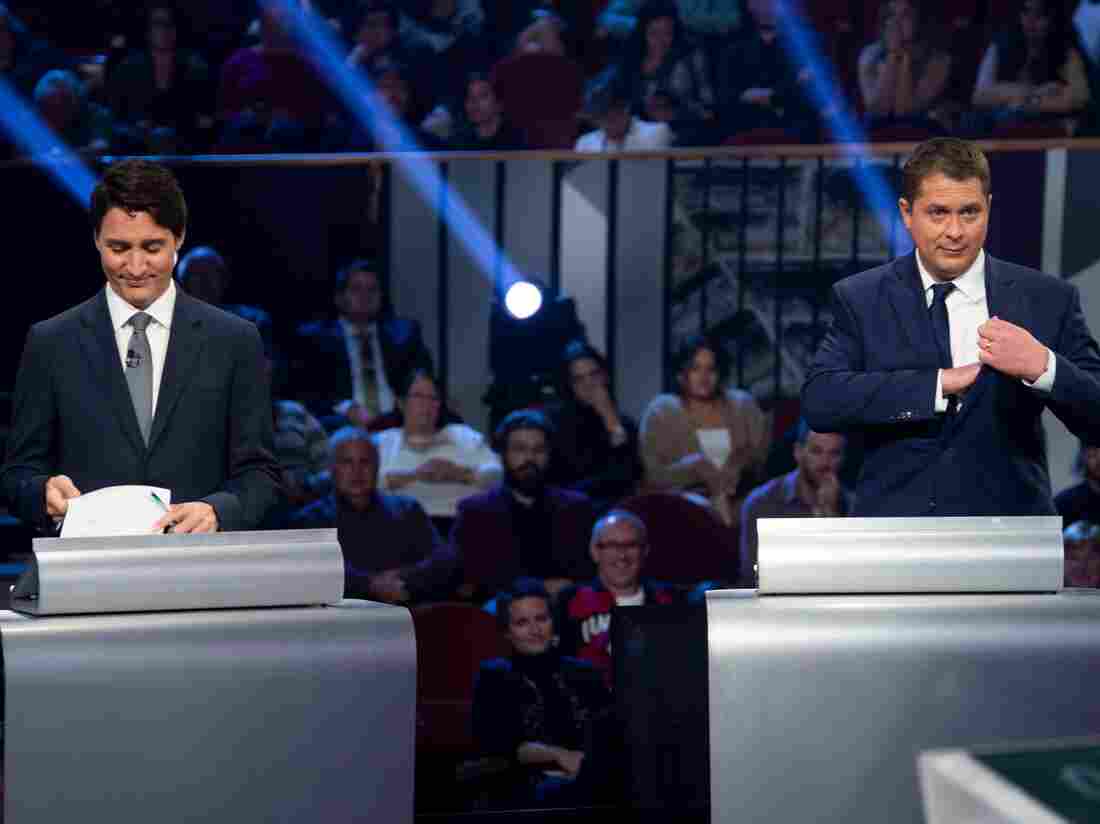 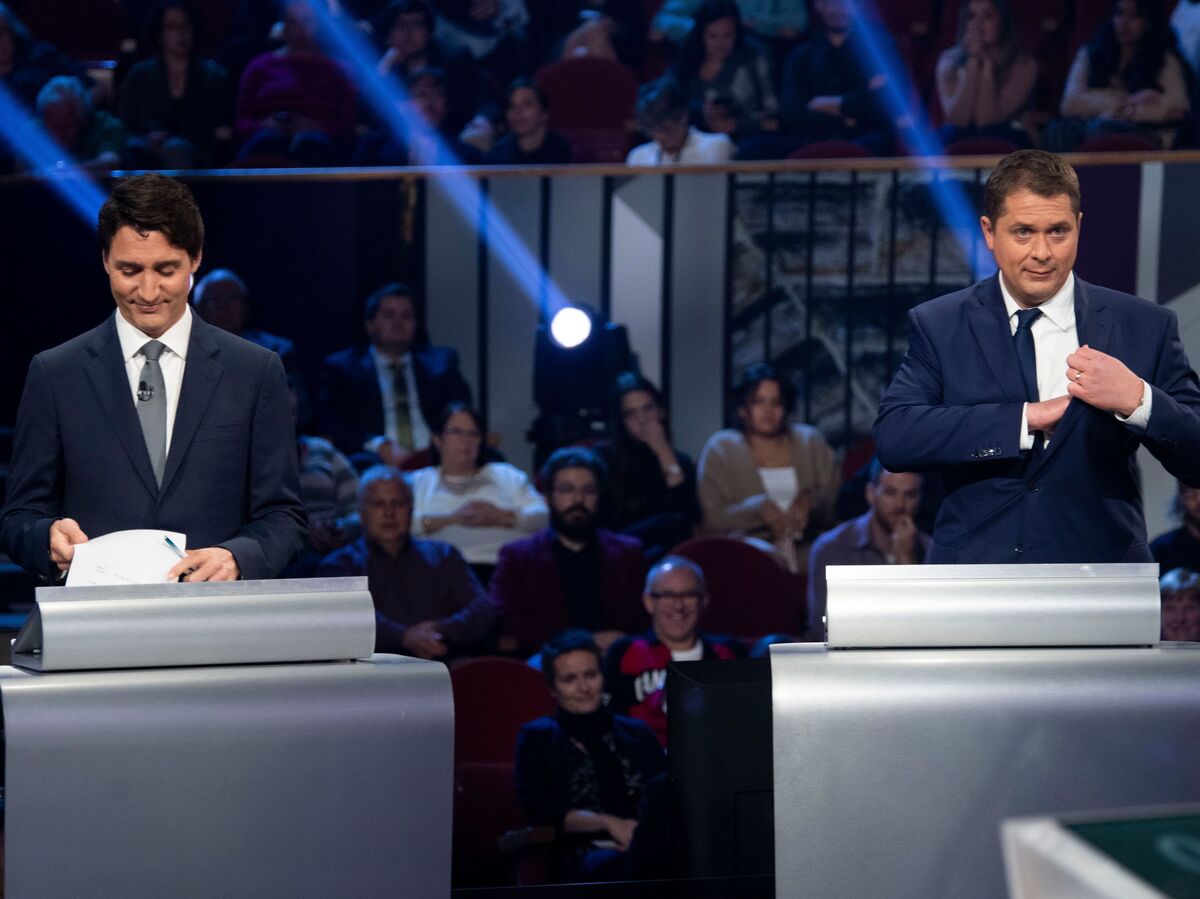 Justin Trudeau (left) and Conservative leader Andrew Scheer take part in a debate at the Canadian Museum of History in Gatineau, Quebec, on Oct. 10.

Isabelle Lapointe, a Conservative Party candidate from outside Montreal who has worked with Scheer for the past several years, says what you see is what you get with him.

But Scheer and his Conservative Party faces an uphill battle — especially in the critical and vote-rich province of Ontario, where the provincial Conservative government there is deeply unpopular because of cuts to health care and education.

Scheer has also been dogged by the revelation earlier this month that he holds joint U.S. citizenship.

"My dad was born in the United States," he told reporters. "I grew up in Canada my whole life."

Scheer says he submitted the paperwork to renounce his U.S. citizenship to the U.S. Embassy in Ottawa.

Political analyst Weston says the revelation has raised questions for some voters about whether Scheer's brand of conservatism is less centrist and Canadian and further to the right and closer to the views held by Republicans in the U.S. Congress.

That concern has been fueled in part by Scheer's anti-abortion views and by a Conservative campaign that has downplayed the importance of fighting climate change.

With voters souring on Trudeau and not warming up to Scheer, third parties have seen a surge of support in the polls. They include the left-leaning New Democratic Party and its charismatic leader, 40-year-old Jagmeet Singh, who is winning over many of the millennial voters who voted for Trudeau's Liberals in 2015.

That vote-splitting on the left and the surge by Quebec separatists could see Scheer's Conservatives capture enough seats to form a government in Canada's parliamentary system with only a minority of seats.

And if that happens, Scheer would become the first American prime minister in Canadian history.