Accessibility links
'Boys Don't Cry' Still Inspires With The Story of Brandon Teena's Murder The tiny independent film became a critical and box office hit by introducing mainstream audiences to a transgender hero. It fictionalized the true story of the brutal murder of Brandon Teena. 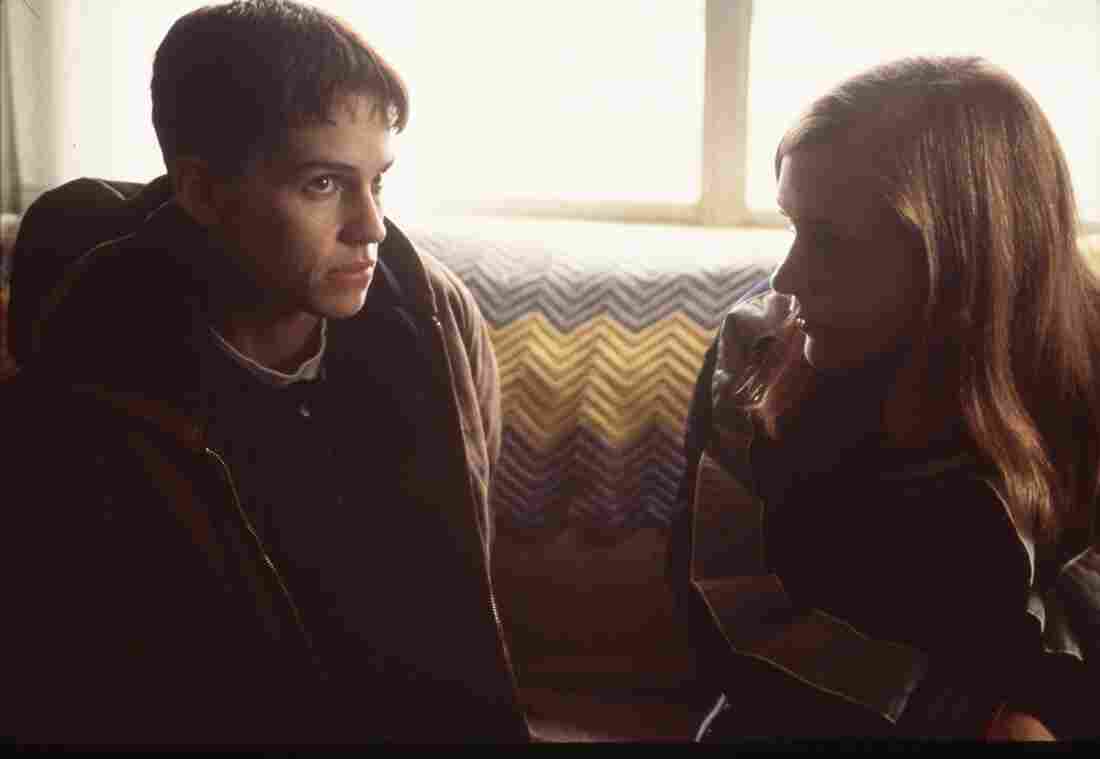 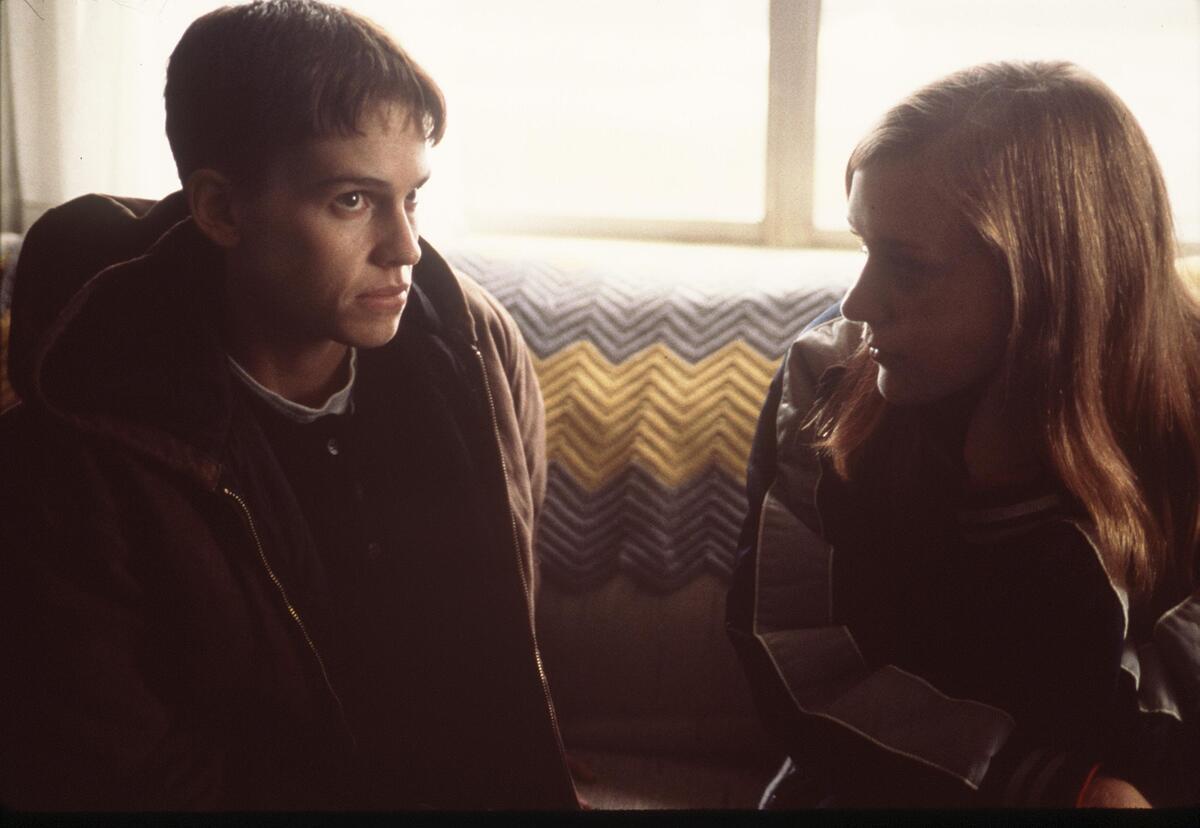 Boys Don't Cry opened in theaters Oct. 22, 1999, first on 25 screens before spreading to hundreds. It became a runaway hit that drew rave reviews for its empathetic portrayal of a young person on a quest for love and acceptance — based on the true story of murdered Nebraskan Brandon Teena — at a time when transgender characters were just not represented on screen.

When Riki Wilchins began transitioning in the late 1970s, she says there was very little trans visibility, even in large cities.

"Trans people were like unicorns," Wilchins says. "I mean, no one had actually seen one in the wild. There was really no one to talk to. The term transgender wasn't even in use."

In the early 1990s, Wilchins co-founded Transexual Menace, one of the first transgender rights organizations. Among its first goals was the documentation of anti-trans murders, which often went unreported. And when they were, says Wilchins, the stories were often coded.

"When trans people were killed the only way we would find out about it was there would be four paragraphs in the back of the local paper, you know, 'Man Found Wearing Articles Of Women's Clothing Murdered In Alley,' says Wilchins. "And that meant that a transgender woman had been violently murdered, but you had to kind of read backwards."

The murder of 21-year-old Brandon Teena was different — it garnered national headlines. In 1993, Teena was killed in the town of Humboldt, Neb., along with two witnesses, Lisa Lambert and Phillip DeVine. The brutal triple homicide garnered salacious, victim-blaming headlines, such as "Cross-Dresser Killed Two Weeks After Town Learned Her True Identity."

When two men stood trial for the murders, members of Transexual Menace and their allies planned a vigil outside the Falls City, Neb. courthouse. They were met with a harsh reception, recalls Kimberly Peirce, who directed and co-wrote Boys Don't Cry.

"We were standing in front of the court building and guys would go by in their big truck and scream terrible things at us and throw things," Peirce says. "And certainly us being there, you know, was catalyzing some kind of anger and that was scary."

Peirce, then a graduate film student at Columbia University, had hitched a ride to the trial with Riki Wilchins and other members of Transexual Menace. She decided to make her thesis film about Brandon Teena after reading an article about him in the Village Voice.

"I fell instantly in love with Brandon," Peirce says. "I was coming at it as a person who was discovering my own gender queerness, and getting to know trans people, and saying, 'Help me tell this story in a way that would be the most authentic.' And I wanted to tell his story as a movie so that other people could empathize with him."

Peirce's thesis evolved into a full-length feature film, and over the next four years she immersed herself in Brandon Teena's world, returning to Falls City to interview his girlfriend and other townspeople. When it was time to cast the film, she says hundreds of actors auditioned, starting with the trans community.

But Peirce says trans actors were harder to find than they are today. The part ultimately went to a relatively unknown cisgender actress: Hilary Swank. When Swank won an Oscar for Best Actress in a Leading Role for her portrayal of Brandon Teena, she used her acceptance speech to honor his courage.

As the first film to introduce mainstream audiences to a transgender man, Boys Don't Cry was a landmark, says Nick Adams, director of transgender representation at GLAAD. But today, Adams says we expect trans roles to be played by trans actors, who now appear in such popular television shows as Good Girls and Grey's Anatomy. He points to Orange is the New Black's Laverne Cox.

"Prior to Orange is the New Black, almost every transgender character was portrayed by a cisgender actor," Adams says. "And with transgender women, men playing them, which only reinforced in people's minds that transgender women are not women, but just men in dresses."

Transgender directors and writers also work behind the scenes on hits including Transparent and Pose.

At the same time, Boys Don't Cry has taken on a more complicated legacy. Some trans audiences object to the brutal violence depicted in the film, others to Peirce's decision to cast a cisgender actress.

Wilchins says sure, the film might not be made the same way today, but Peirce doesn't deserve the backlash.

"It's not fair to go back and apply standards 20 years later that didn't exist back then," Wilchins says. "What she did is a major, major accomplishment. It legitimated and made possible all of these other representations that we've had since."

That includes an increasing number of nonbinary characters who are portrayed by nonbinary actors. One of those actors, Asia Kate Dillon, of Showtime's Billions, has called on the major acting awards to jettison gendered acting categories altogether.

Although visibility continues to expand, violence against trans people persists. According to the most recent figures, at least 19 trans people have been killed so far this year, the majority trans women of color. Nevertheless, Wilchins says she's hopeful that will change, encouraged by other recent studies that indicate that binary definitions of gender have less meaning for the next generation.