Accessibility links
Mitt Romney, 'Pierre Delecto' And Anonymous Criticism Of Trump The Utah senator outed himself over the weekend as the owner of a mostly nondescript Twitter handle that defended Romney and was critical of President Trump. 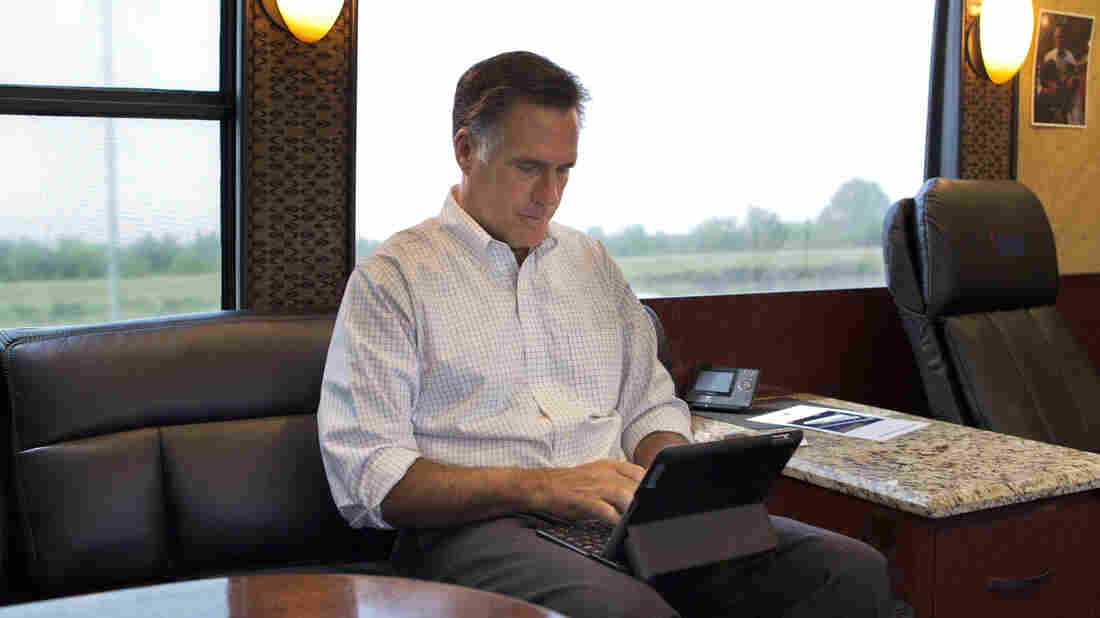 Mitt Romney, pictured riding on his campaign bus through Iowa during his 2012 presidential bid, has admitted to using a pseudonym on Twitter. Evan Vucci/AP hide caption 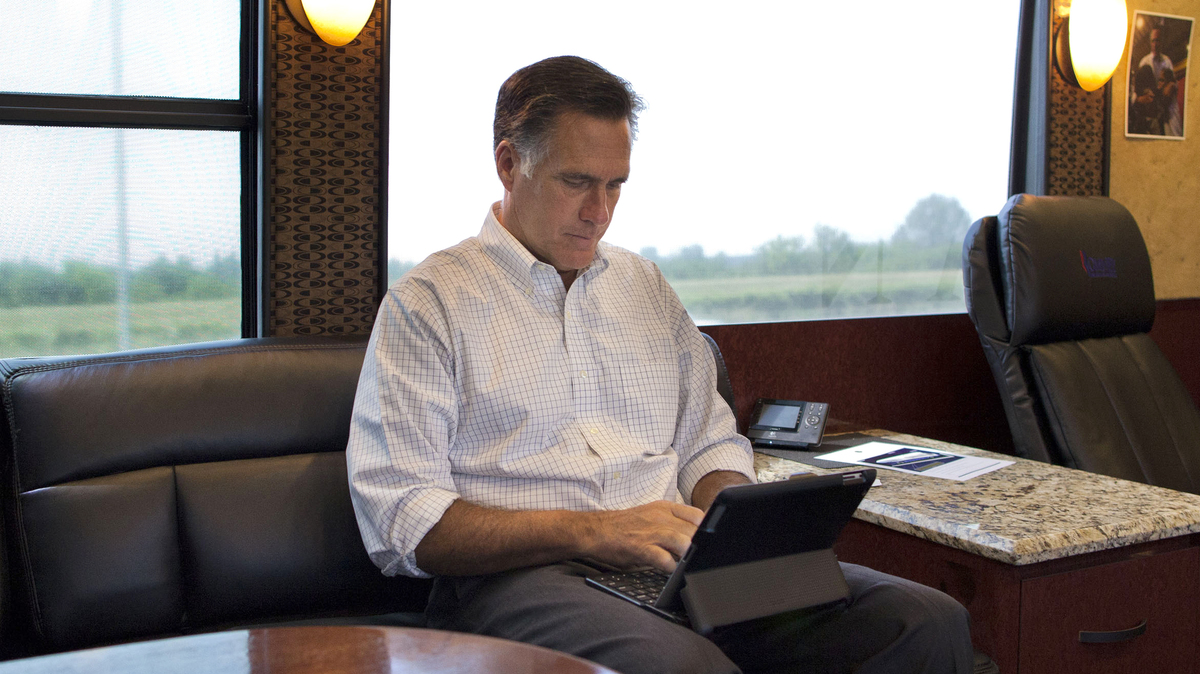 Mitt Romney, pictured riding on his campaign bus through Iowa during his 2012 presidential bid, has admitted to using a pseudonym on Twitter.

The rap on Mitt Romney is that though he isn't a fan of President Trump, when he speaks out, it's in a fairly lukewarm way.

And then it was revealed over the weekend that he's been behind an anonymous Twitter account under the nom de plume Pierre Delecto.

"C'est moi," Romney confirmed, using the French for "it's me" to reporter McKay Coppins, who had just published a Romney profile. (Romney is a French speaker from his days as a Mormon missionary, which might explain the "Pierre" first name. No word on the Delecto surname.)

Romney's not the first politician to use a pseudonym or have an anonymous Twitter account. Former FBI Director James Comey was also Reinhold Niebuhr on Twitter. Trump himself has reportedly had multiple pseudonyms through the years, including John Miller, then John Barron and David Dennison.

Other public officials have performed their version of anonymous subtweeting. Mike Rothschild at Daily Dot rounded up some of them in 2018 — James Madison used Publius to write the Federalist Papers; Alexander Hamilton criticized Thomas Jefferson under the name Phocion; under the fake name Caesar, Hamilton responded to a future vice president, George Clinton, who was critical of the Constitution. Clinton also used a fake name, the also-Roman-inspired Cato.

Even former President Barack Obama apparently used a pseudonym at some point to email Hillary Clinton, though the name has not been made public. Obama's attorney general, Eric Holder, used Henry Yearwood, David Kendricks and even the obviously phony Lew Alcindor.

The account is now locked, but luckily Ashley Feinberg of Slate — whose sleuthing showed all signs pointed to Romney as being behind the account — has captured the highlights. (Feinberg is also the reporter who outed Comey's secret Twitter handle.)

"Pierre has only ever tweeted 10 times total, and all of them have been replies to other tweets—certainly the sort of behavior one might expect to see from a self-described 'lurker.' The account's first tweet, coming a whole four years after its initial registration, was a show of frustration at Fox News for not yet having a New Hampshire presidential poll up."

Here are a few notable ones:

Delecto tweeted: "@FoxNews why isn't your NH poll up on your web site?"

At the time, the poll showed Trump leading the GOP field in the key early primary state.

Delecto awoke from his slumber earlier this year, with Romney now a U.S. senator. He replied to a tweet by reporter Steven T. Dennis of Bloomberg, who noted the names of four senators who were "sticking up for" Sen. Richard Burr as chairman of the Senate Intelligence Committee.

Delecto chimed in that Romney was also sticking up for Burr. "Said to Post he has confidence in Chairman Burr."

He told conservative writer Jennifer Rubin that she "needed to take a breath" after a critical piece on Romney and a tweet in which she called his strategy toward Trump "nonconfrontation verging on spinelessness."

Delecto: "Maybe you can then acknowledge the people who agree with you in large measure even if not in every measure."

Former CNN reporter Soledad O'Brien tweeted that Romney has an "utter lack of a moral compass" in response to a story that noted Romney might not endorse Trump in 2020.

Delecto: "Only Republican to hit Trump on [Mueller] report, only one to hit Trump on character time and again, so Soledad, you think he's the one without moral compass?"

This might be the most house of mirrors one of all the tweets.

Romney, under his official account, tweeted that if Trump pressured Ukraine's president to investigate Biden, then "it would be troubling in the extreme."

Then Romney did respond, but not as himself. He left it to Delecto to slide into Scarborough's replies.

Fox News' Brit Hume responded to that with a quip that "Some might say Romney is too."

It was time for a Delecto burn. He replied that Romney is "loyal to principle," while Trump's "loyalty [is] to party or person, right Brit?"

Delecto responds with this revelatory tweet to the mind of Romney: "John, agree on Trump's awful decision, but what could the Senate do to stop it?"

Conservative writer Erick Erickson commended Romney for being critical of Trump and "for not being fearful. Frankly, more Republican Senators need to speak up ... ."

Delecto: "Don't read the comments, ever."

The response to Romney has been mixed, but fellow Francophile, former Secretary of State John Kerry of Massachusetts, tweeted, in French, that he approves.

Political blogger Charles Pierce tweeted, asking if anyone had invented a Pierre Delecto cocktail yet. Some of the responses are ... predictable and amusing.

Has someone invented the Pierre Delecto cocktail yet?
/asking for posterity