Accessibility links
Chile Protests Resume As Government Calls For Unity Demonstrations against wealth inequality have persisted, despite the fact that President Sebastián Piñera suspended transit fare hikes. There have been at least eight deaths reported. 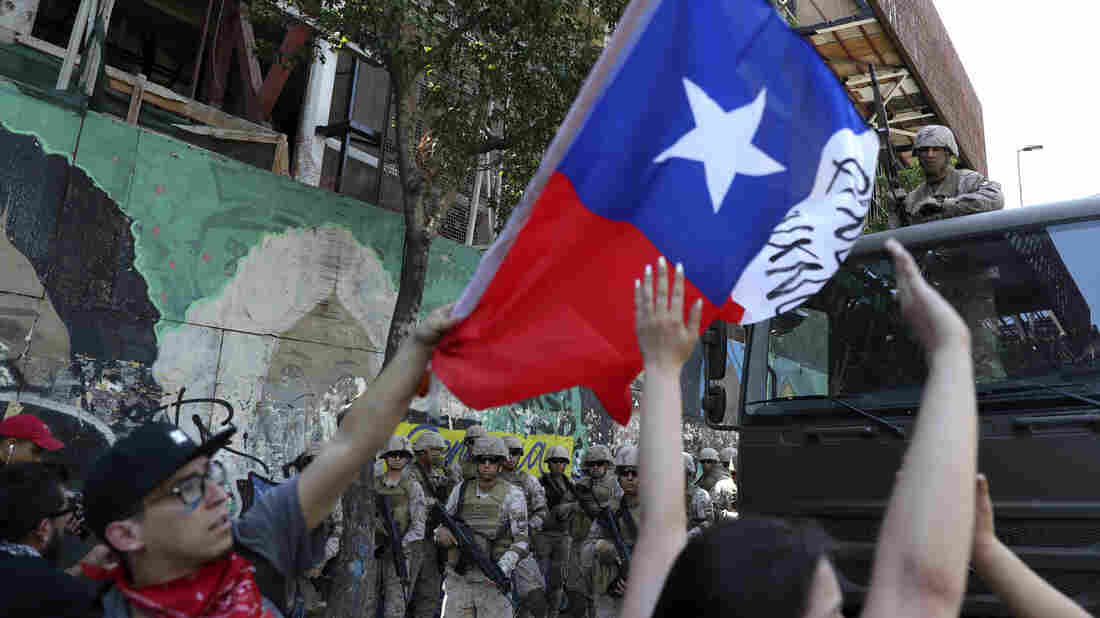 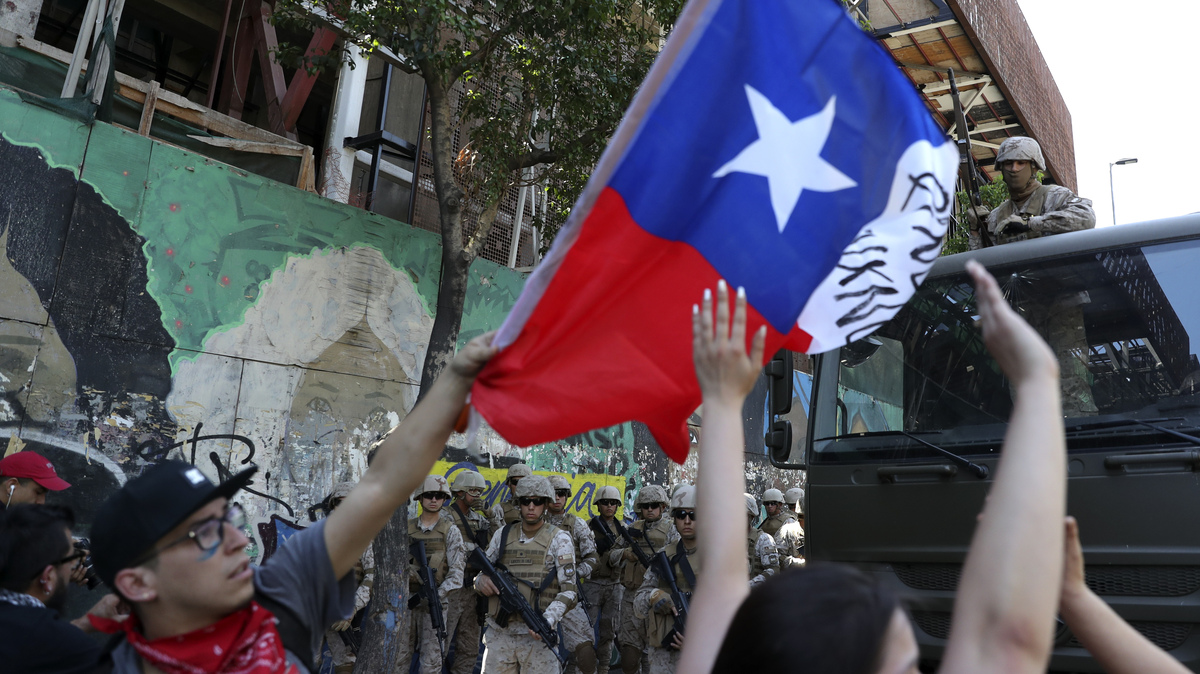 Protesters wave a Chilean national flag in front of military personnel in Santiago on Monday.

Protests continue in Chile after a weekend of violence and destruction over a recent transit hike. The unrest continued after President Sebastián Piñera suspended the 4 percent fare increase.

The protests in the capital city of Santiago come amid growing discontent over rising the cost of living and lack of salary increases. The weekend's riots saw protesters shut down the Metro de Santiago and burn down a high rise. Officials have reported at least eight deaths as a result of the protests.

The large military presence in Santiago, said to be about 10,500 soldiers and police officers, has drawn comparison to the brutal dictatorship of Augusto Pinochet, who ruled Chile through arrests, torture and murder from 1973 to 1990.

The Chilean Prosecutor's Office has announced that more than 2,100 people have been detained.

So far, the damage made to the Metro is estimated to be at least $200 million. Interior Minister Andrés Chadwick told reporters Monday that 110 supermarkets were looted and 13 buildings were set ablaze, including an office of energy company Enel Chile.

On Monday morning, schools canceled classes and only one line on the Metro was operational. Many grocery stores were closed, with long lines at those that were open and troops monitoring them. Protesters took to the streets again on Monday, resuming skirmishes with police and military officials.

In a statement televised Sunday night, Piñera imposed another curfew and extended the country's state of emergency in hopes of deterring more protests.

This is happening in Chile now. Armed forces in the streets after Piñera’s decision to declare a State of Emergency. Strikes began after a 2nd. rise of metro fares (20% of minimum wage). There is a general discontent because basic HR are not really guaranteed. #ChileDespierta https://t.co/0D4BAd7Dip pic.twitter.com/p2TmX15jOd

"They are at war against all good willed Chileans who want to live in a democracy, with liberty and peace," Piñera said, referring to protesters.

Protesters have used the phrase "no estamos en guerra," Spanish for "we are not at war," in response to Piñera.

Confrontations between demonstrators and police turned violent Friday as police responded with riot gear and tear gas. The violence continued throughout the weekend. Santiago officials said three people died in fires at two looted groceries and five more people were found dead in the basement of a burned warehouse.

Although protests have continued on Monday, local officials say they hope conditions remain peaceful to allow a recovery period.

Photo from above:
Dictator Pinochet
Photo below:
President Piñera.

"The word today is reconstruction. First, of trust," said Santiago Mayor Karla Rubilar. "And of course we are also in a time of reconstruction of the city."

Chileans expats have used social media to show their support for the protesters. Some, including those in Tokyo and Manchester, have organized their own street protests in solidarity with those in Santiago.