Accessibility links
Book Review: Trump's Former VA Secretary Describes 'Toxic' Washington Culture In New Book David Shulkin's memoir, It Shouldn't Be This Hard to Serve Your Country, focuses on his time as veterans affairs secretary, tells of his fights against privatizing the VA — and settles some scores. 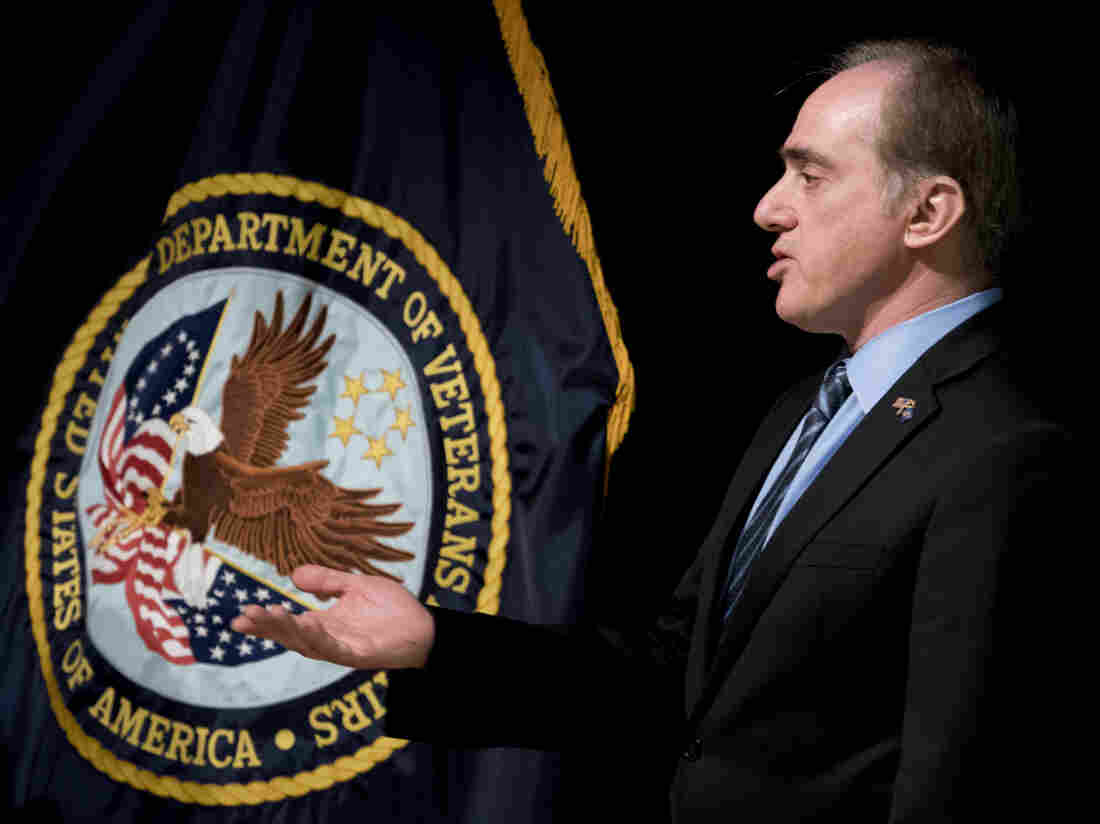 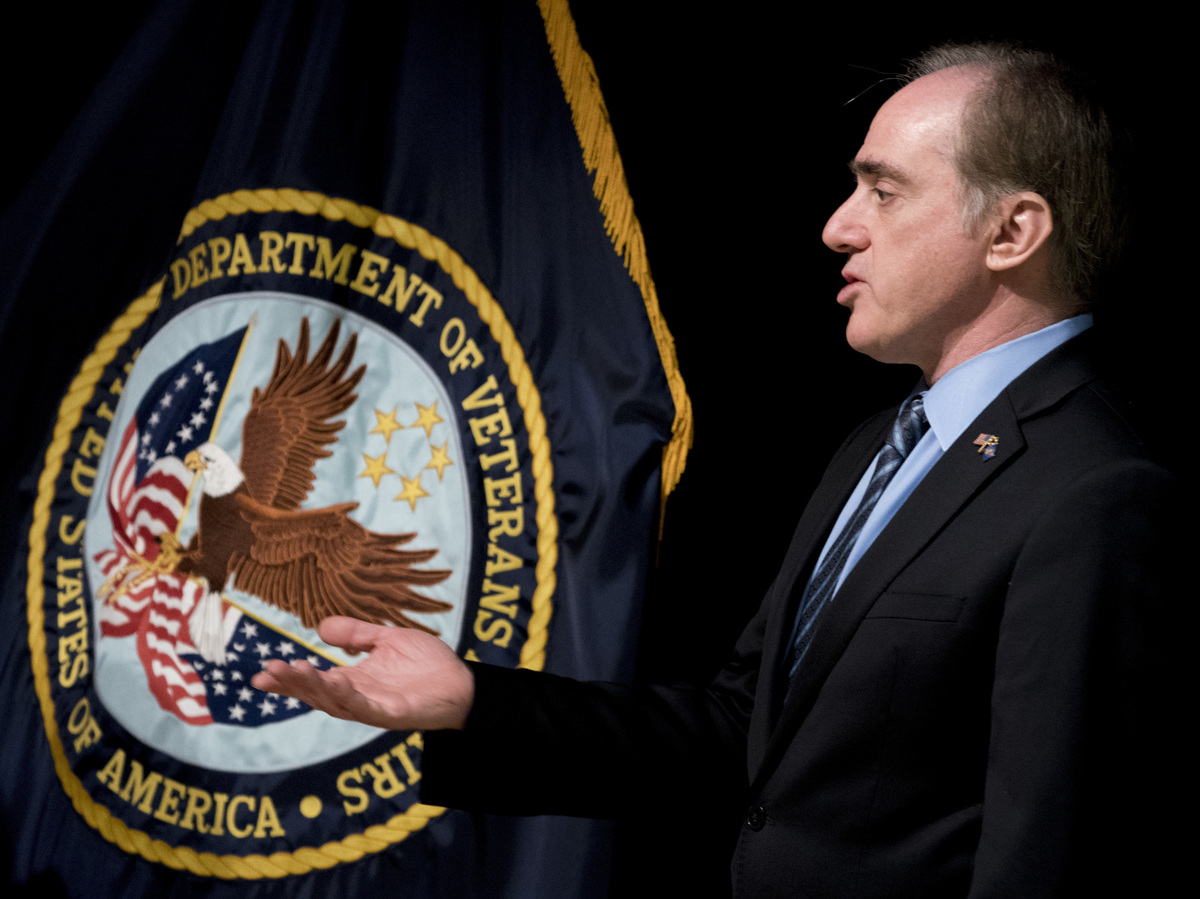 By some measures, David Shulkin had a fairly typical experience for members of the Trump administration. He learned he was nominated to become secretary of veterans affairs while watching TV — and found out he was fired on Twitter. 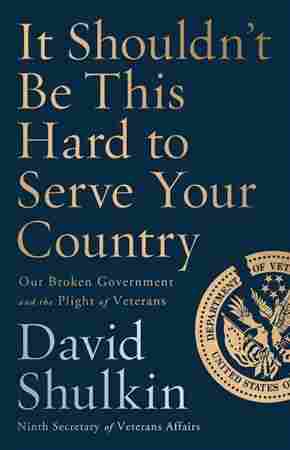 It Shouldn't Be This Hard to Serve Your Country

Our Broken Government and the Plight of Veterans

In between, he was praised by the president but stabbed in the back by others in the administration, including his own security detail; had to deal with outside advisers who had the president's ear; and was victimized, in his view, by the news media, all the while wrestling, with some degree of success, with an entrenched and resistant-to-change bureaucracy.

So it comes as no surprise that after having spent 13 months as VA secretary, Shulkin describes the environment in Washington as "toxic, chaotic and subversive" in his new memoir of his service, It Shouldn't Be This Hard to Serve Your Country.

Shulkin's story is by turns disturbing and frustrating. As part of the line of succession to the president, Shulkin had to travel with security agents. But as he was being forced out of his post, he says those very agents — part of what could be considered a deep state of political appointees within the VA, which Shulkin labels "the politicals" — leaked his schedule, putting his safety at risk.

His story is frustrating, in part, because this is the Department of Veterans Affairs, the government department set up to serve those "great veterans" the president often lauds yet who are often afterthoughts in the bureaucratic turf battles Shulkin describes.

Shulkin was undersecretary of the VA in the Obama administration. He was preparing to leave the agency, "tying up loose ends" after Trump's election, when he got an unexpected phone call, from Trump's attorney, Michael Cohen. "I need you to speak to someone right away," Cohen told Shulkin. That someone was Ike Perlmutter, the chairman of Marvel Comics — and a Trump confidant. Perlmutter summoned Shulkin to Palm Beach, Fla., and the next day he met with him, and another doctor at Mar-a-Lago. Perlmutter, an Israeli who immigrated to the U.S. after the Six-Day War in 1967, told Shulkin that he was unhappy with the current situation at the VA and that Trump had asked him to help fix the agency. After a 90-minute chat, Shulkin flew back to Washington, curious about what that was all about, only to be summoned to meet with the president-elect two days later at Trump Tower.

He writes that he found Trump at his desk, which was "covered with copies of Time magazine with his picture on the cover as Person of the Year."

Trump proceeded to ask Shulkin, a former hospital administrator, which hospital he thought was the best in New York, who Shulkin believed was the best candidate for the VA post and what he would do if he were in charge of the VA. Shulkin also looked on as Trump mediated a dispute between Kellyanne Conway and Jared Kushner over whether a news release should be issued announcing Kushner's role in the administration.

Shulkin says he felt as if he had stepped into a Saturday Night Live sketch and says he left the meeting having "no idea of what had just happened."

On Jan. 11, 2017, Shulkin found out — while watching a news conference on TV of Trump making the announcement — that "the new head secretary of the VA" would be him.

Shulkin was confirmed by the Senate 100-0, the only member of Trump's Cabinet to win unanimous confirmation. "Maybe bipartisanship wasn't totally dead," he writes. Cynics might want to inject a hearty "ha" at this point. But if Shulkin, a physician by training, was naive about the ways of Washington, he was also determined.

He writes that he heard from the president's friend, whom he simply calls Ike, several times a day, once suggesting they show up at VA facilities without notice "to see what was really going on." Shulkin explained to him that as a private citizen, it wouldn't be appropriate to be part of an unplanned inspection in a hospital.

More worrisome were the political appointees the administration placed within the VA. Among them was Darin Selnick, a former adviser to Concerned Veterans of America, a lobbying group funded by the Koch brothers — and a former Marine named Jake Leinenkugel, whose only previous administrative experience, Shulkin writes, was running his family's Wisconsin brewing company, but who had no experience in health care or human services.

While these "politicals" would eventually work to oust Shulkin, he writes he actually had a good relationship with the president himself. "Both privately and in public forums, the president often referred to me as the '100-0 man' and 'my David.' "

At the VA, Shulkin worked on a number of fronts to streamline and modernize the vast agency, which has nearly 380,000 employees providing services to 9 million eligible veterans.

He took on everything from making it easier to hire nurses and fire incompetent staff to updating the VA's antiquated IT systems — as well as the medically and politically important need to reduce patient waiting times, which was a problem at many VA facilities.

But perhaps his biggest task was to renew and reform the Veterans Choice Act, which allows veterans not near a VA site to seek care with private physicians. The act was first approved during the Obama administration. But it was up for renewal under President Trump.

And this is where Shulkin, already under suspicion by "the politicals" as a holdover from the Obama administration, incurred his strongest opposition.

Conservative elements, led by the Koch-backed CVA, Shulkin writes, wanted to privatize the VA and saw the renewal of the Veterans Choice Act as a step toward accomplishing that goal. While Shulkin and many in Congress, including Sen. Johnny Isakson, R-Ga., the chairman of the Senate Veterans Affairs Committee, backed a gradual expansion of the use of private doctors by veterans, the CVA wanted a far broader and more expensive expansion. Shulkin writes of a meeting with Trump on the issue and the president asking him, "What does Pete Hegseth think of this choice thing?"

Hegseth, a Fox News commentator and former director of the CVA, was immediately summoned on the phone, much to Shulkin's surprise.

"Pete, what do you think of this choice stuff?" Shulkin reports Trump asking. After Hegseth says the Isakson bill doesn't go far enough, Trump, surprisingly, agrees with Shulkin, telling Hegseth, "I have the secretary here with me, and he says we can't do this all now, because it would cost us over $50 billion. So, Pete, we have to take our time."

Trump's support of the less extensive expansion of Veterans Choice was a victory for Shulkin — but this was also the last time he met with Trump.

While this fight had been going on, Shulkin had also been engaged in another battle, this one over a trip he and his wife had taken to Europe in which he mixed some official meetings with sightseeing and taking in a Wimbledon tennis match. Details of the trip were leaked to The Washington Post.

Coming at around the same time as other Cabinet secretaries were under fire for using private jets (which Shulkin did not do) and extravagantly decorating their offices at taxpayers' expense, it fit the building narrative that the Trump administration, rather than draining the swamp as had been promised, was actually expanding it.

In his book, Shulkin spends a great deal of time relitigating the issue and a subsequent inspector general's report, which found a "misuse of VA resources."

Astonishingly, Shulkin says the VA's press office refused to offer any response to the inspector general's report on his behalf, so he posted his own statement of defense on the agency's website, which the White House quickly told him to take down.

There was a call for his resignation from at least one member of Congress — and soon the inevitable leaks from unidentified White House aides that the president had lost confidence in Shulkin. This was not true, then-White House Chief of Staff John Kelly told him.

On March 28, 2018, just after 5 p.m., Shulkin discovered his fate, when Trump tweeted that he intended to nominate his personal physician, Adm. Ronny Jackson, "as the new Secretary of Veterans Affairs," adding, "I am thankful for Dr. David Shulkin's service to our country and to our GREAT veterans!"

And that was it. His office email and phone were cut off, and he handed over his government electronics to a driver that night. "I turned away empty-handed and heartbroken," Shulkin writes.

He says journalists "allowed themselves to be played as if they were the administration's own hatchet men and women" and writes that the inspector general's investigation "had been a red herring to distract from the bigger picture of the Koch brothers' and the politicals' game plan, Choice and the overarching desire to eventually privatize the VA."

While Shulkin may have some legitimate grievances, at times the score-settling threatens to overshadow the other key messages of Shulkin's book: the importance of attracting talented people to serve in the government, the difficulty in doing so when they are treated as he says he was and, most of all, the crucial need to do better by the nation's veterans.