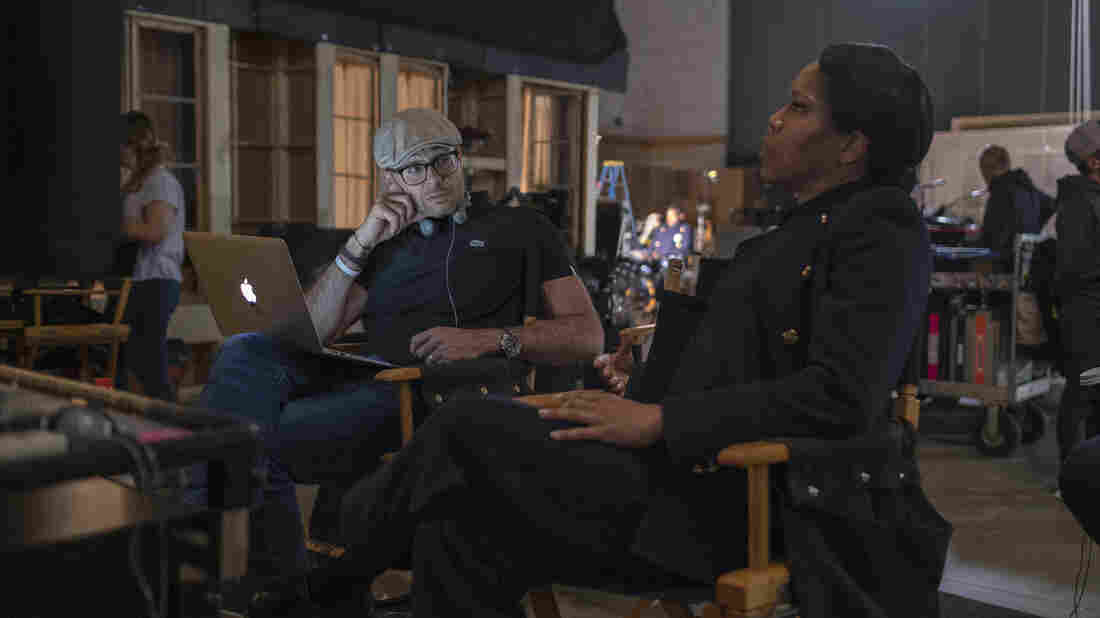 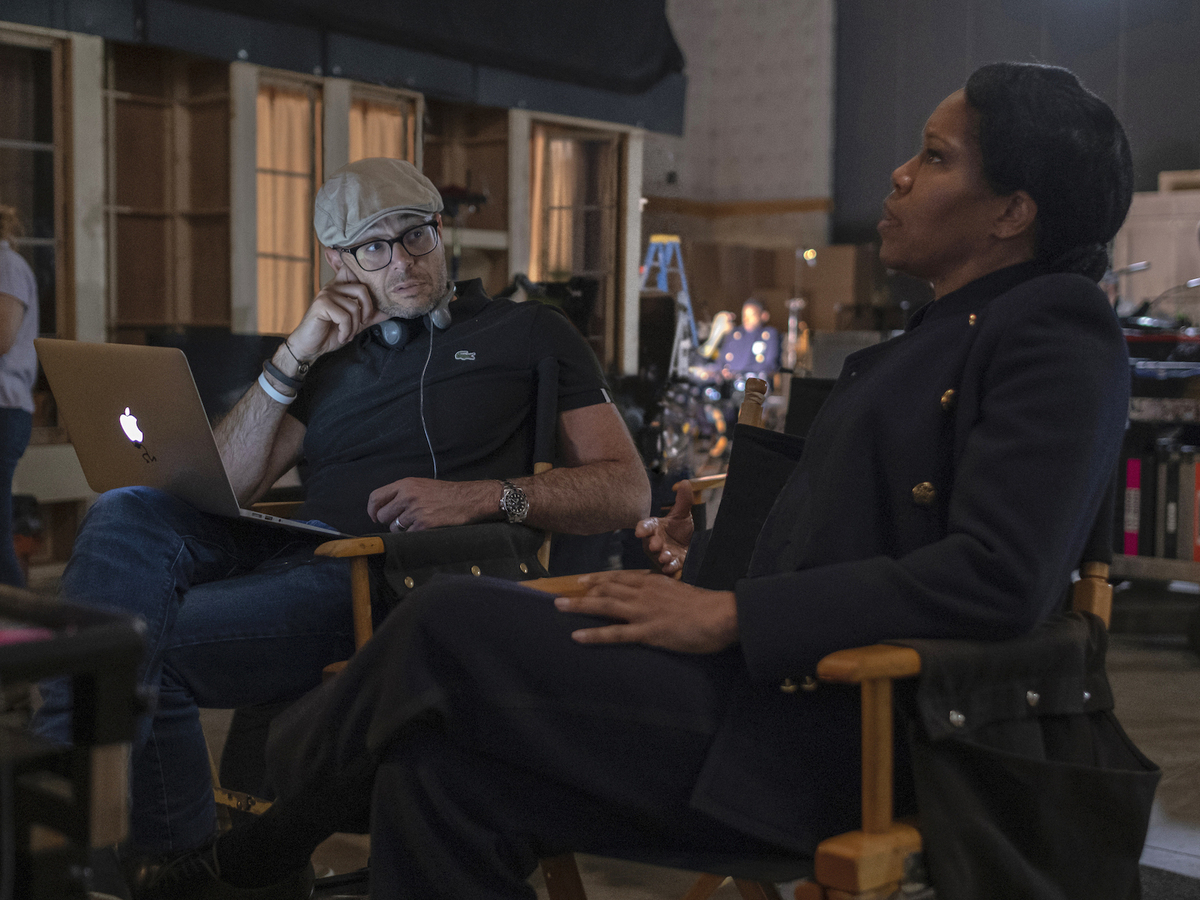 Damon Lindelof and star Regina King on the set of Watchmen.

Even in a pop cultural landscape dominated by costumed superheroes and masked vigilantes, HBO's new series Watchmen stands out. Watchmen was originally a comic that first came out in 1986, and it was seen as groundbreaking for its realistic and complex handling of what it might mean for someone to put on a mask and fight crime.

Who Watches This 'Watchmen?' I Will, And You Should

TV producer Damon Lindelof was 13 years old when his father first handed him a couple of issues of Watchmen. "I'll never forget it," he says. "It was a Saturday afternoon ... and he just gave them to me and said, 'You're not ready for this.' And he sort of ominously walked out of the room and I — you know obviously this was not happening, but it felt like they were crackling, like there was a static charge to these two things, and it was very different than any comic I've ever read. It was violent. It was gritty. It was scary. It was weird; it took place in New York, not in Gotham City or Metropolis. Nobody had any superpowers. It was political."

And, Lindelof says, it asked an important question: "What happens if these people existed in the real world? Shouldn't we be a little worried about people who put on masks?"

Lindelof is the creator of the new Watchmen series on HBO. It's set in Tulsa, Okla., 30 years after the events of the original comic. The threat of white supremacy is rising, but in this world, superheroes are outlawed and the cops are the ones wearing masks.

On why he chose to focus on racism, rather than the original series' fear of nuclear holocaust

... 'Watchmen' has always been about the history that has been kind of hidden and camouflaged, and also it's about the pain and trauma that is sort of buried in the American consciousness. And I started to feel like it was incredibly important to tell a story about race.

At the time that I was sort of approached to consider rethinking Watchmen, I had to answer the question, "What is the pervasive sort of anxiety in America right now?" And it was impossible, as all these things were happening — not just Charlottesville but everything was happening through the lens of race and it felt like there was a great reckoning happening in our country, overdue and necessary. This idea that Watchmen has always been about the history that has been kind of hidden and camouflaged, and also it's about the pain and trauma that is sort of buried in the American consciousness. And I started to feel like it was incredibly important to tell a story about race. To not tell a story about race in the context of a political text in 2019 almost felt borderline irresponsible.

Essentially, about four or five years back it became very popular to have read Ta-Nehisi Coates ... especially if you were a white liberal. And when I finished "The Case for Reparations," I just didn't see the world in the same way anymore. Mr. Coates mentioned Black Wall Street, which I had never heard of. So I bought this book called The Burning, that was all about the Tulsa massacre, and I read it cover to cover and a couple of days. And right at that same time I was being approached about Watchmen, and I was trying to think about one of the things that made Watchmen sort of electric was this sort of blending of "is that real history or is that not real history?" And I started to feel that the Tulsa massacre, even though it was built on this incredible, horrible taking of treasure and destruction of an African American utopia in 1921 Oklahoma, I sort of felt like that was an incredibly compelling story we're telling, and it felt like a superhero origin story in some weird way. It felt like Krypton, you know? It felt like the destruction of of a world.

We want some degree of escapism — but I think that there is a responsibility, even if you're doing comic book storytelling to mirror the world that we're living in now.

Yeah absolutely. And I think that a lot of our creative process was based on, "we have real reservations about this." And I think that there's certainly a concern coming into the first episode, that the show is essentially saying you're supposed to feel for the cops, or you're supposed to buy that cops and white supremacists are two separate entities, and that there's no overlap in between, when we all know that the real world is much messier than that. That said, I feel like that the show doesn't take a position of being pro-cop or anti-cop. I think that because it's taking place in an alternate history, the question that it's really asking is, what makes someone want to be a cop, and what is the idea of the law, and what's the line between the administration of the law and vigilantism.

I don't know about the timing. I do know that now is a really interesting time to look at where we are with superheroes. There's something to the fact that we idolize and look up to these figures, and spend billions and billions of dollars to watch their stories. And so I think that you see movies like Joker using these pre-existing myths to sort of subvert or reflect the times that we're living in now. That's the way that we like to hear stories. Sometimes it's too hard to get the docudrama, to get the real taste of what's happening out there. We want some degree of escapism — but I think that there is a responsibility, even if you're doing comic book storytelling to mirror the world that we're living in now and reflect it back at the audience.

This story was produced for radio by Marc Rivers and Mohamad ElBardicy, and adapted for the Web by Petra Mayer.