Accessibility links
In Chile, Protesters Continue To Defy The President And Military The country has been gripped by mass demonstrations and planned union strikes over inequality, prompting President Sebastián Piñera to offer economic reforms.

In Chile, Protesters Continue To Defy The President And Military

In Chile, Protesters Continue To Defy The President And Military 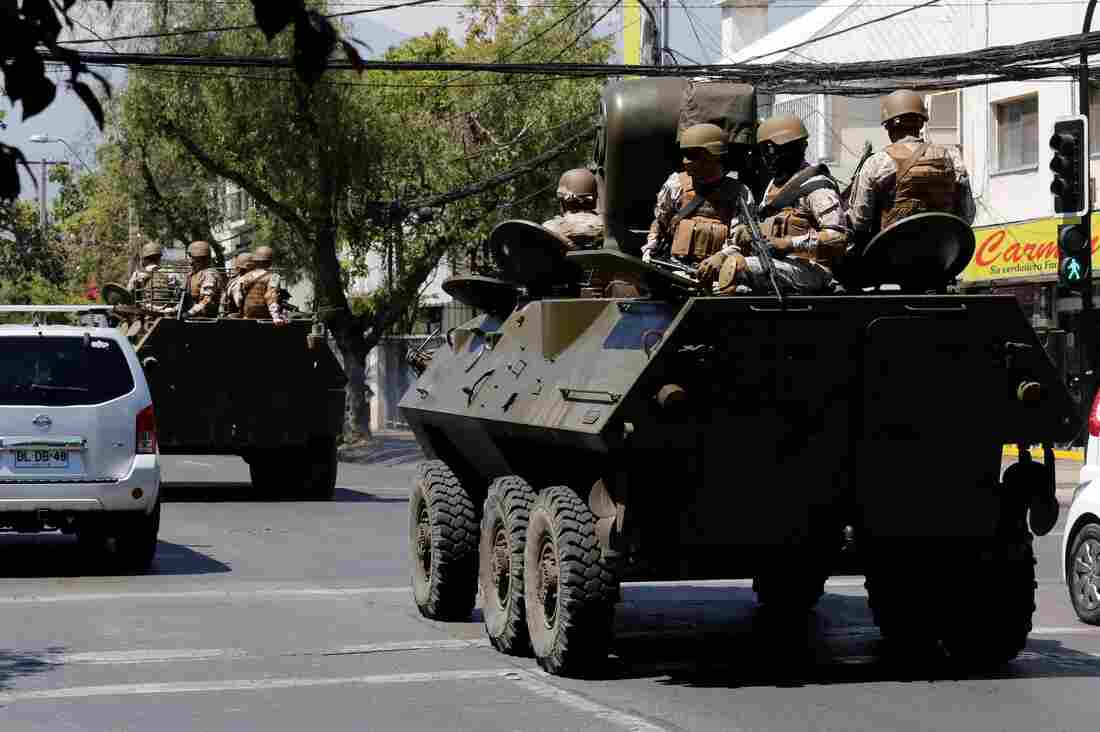 A Chilean military convoy patrols the streets of the capital of Santiago on the fourth day of unrest on Tuesday. Sebastian Brogca/Anadolu Agency via Getty Images hide caption 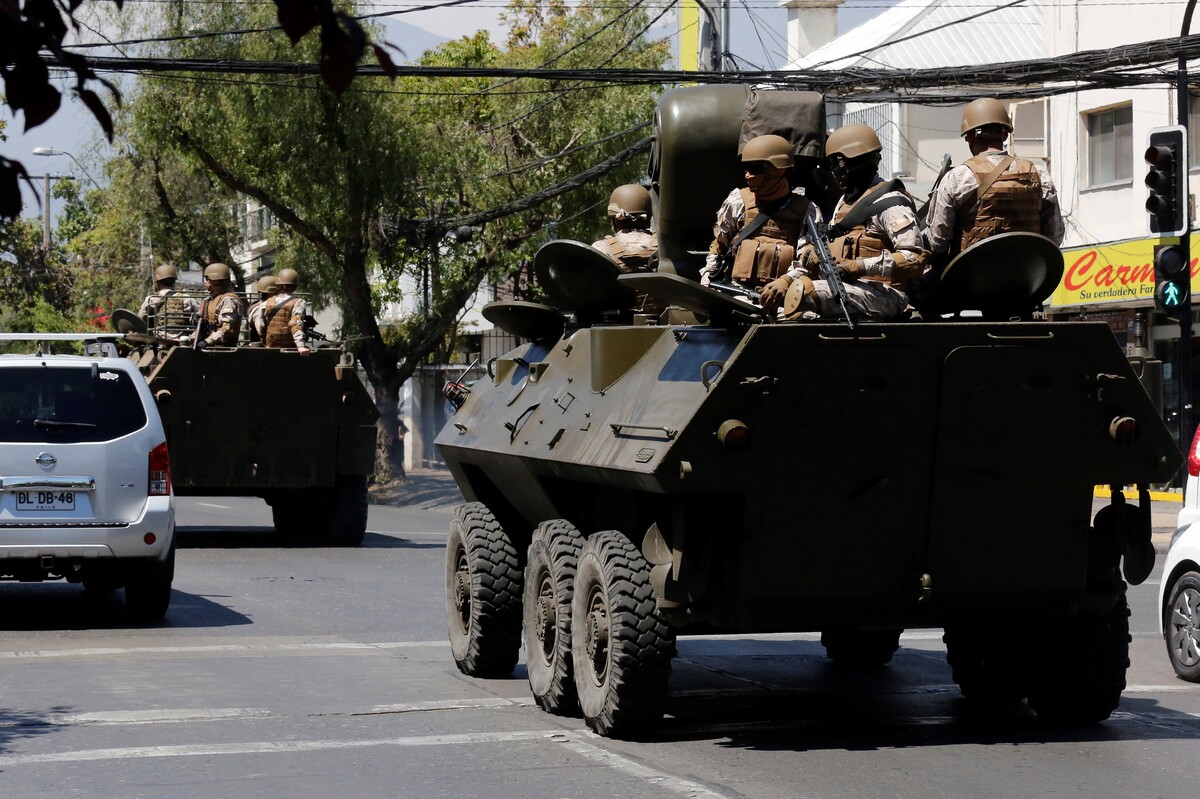 A Chilean military convoy patrols the streets of the capital of Santiago on the fourth day of unrest on Tuesday.

Massive protests have continued over economic inequality in Chile this week, defying the president and security forces' efforts to restore calm. The widespread and sometimes violent unrest has led to more than a dozen deaths.

In a televised address Tuesday night, Chile's President Sebastián Piñera announced economic reforms, including higher pensions and a minimum wage hike, and he apologized that Chilean governments have failed to adequately address social problems. But on Wednesday, workers and students returned to the streets and plazas of Santiago, the capital city.

Smaller demonstrations began on Oct. 14, when crowds of students refused to pay a metro fare increase by storming various stations and jumping over the turnstiles in Santiago. By last Friday, what had been largely peaceful protests gave way to bouts of violence, destruction and looting. Eighteen people have died, The Associated Press reported.

Piñera suspended the modest subway fare hike and proposed a new "social contract" to benefit all Chileans. That has not stopped one of Chile's biggest public upheavals in a decade. The conservative president's sharp initial response — declaring "we are at war with a powerful enemy" and deploying the military to impose order — has provoked further unrest.

Demonstrators say the troop presence on the streets triggers painful memories of the country's 17-year military dictatorship that ended in 1990. Thousands of Chileans were imprisoned, tortured or killed by Gen. Augusto Pinochet's regime.

"It was like a slap in the face for all of us," says protester Paz Lagos, 54. "This history is still alive and we haven't forgotten what happened when the military took over the streets. It was a very hard time — many died. We do not want the same thing here." 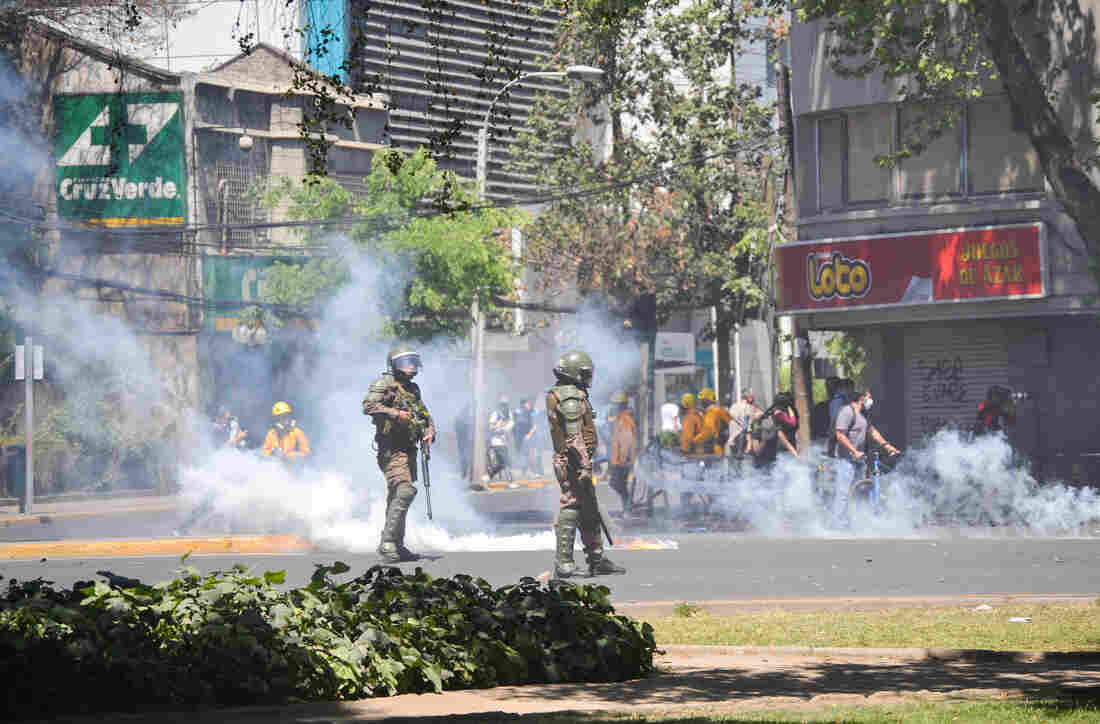 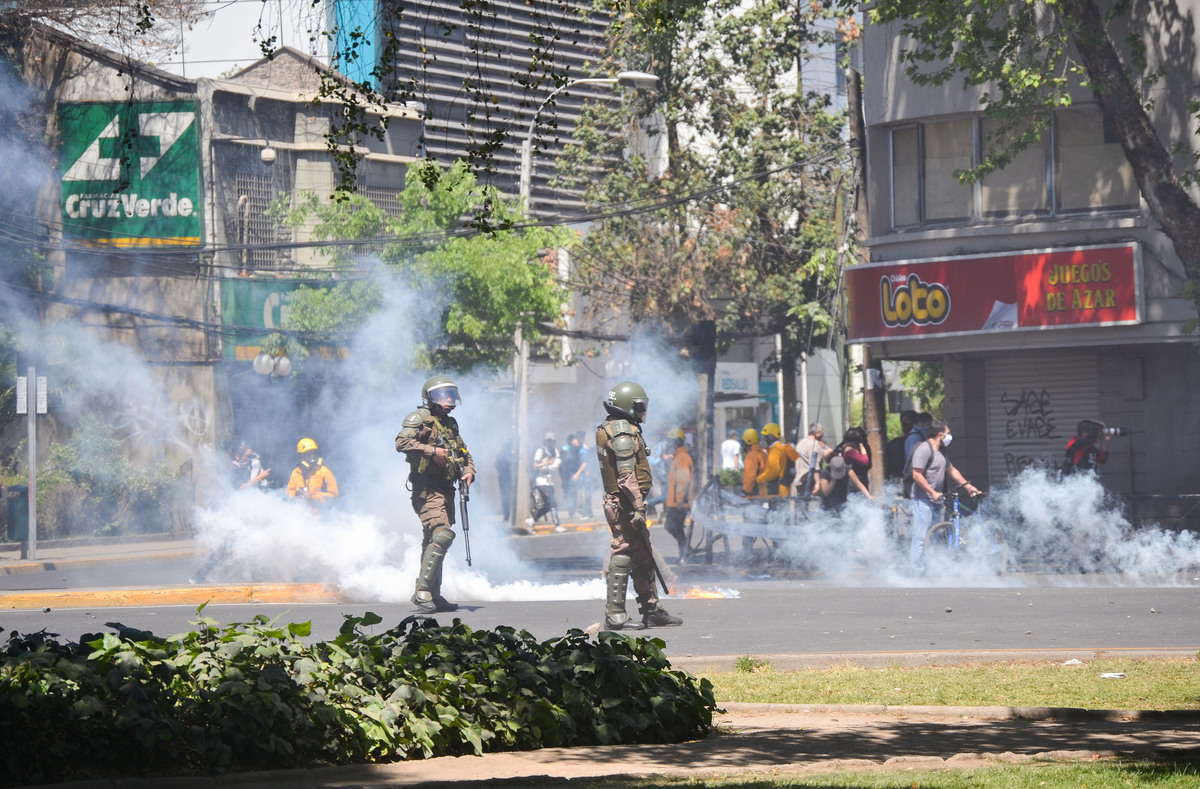 Riot police shoot tear gas and water cannons into a crowd of protesters in downtown Santiago on Monday.

Protesters are angry that many Chileans have been left behind in the country's economic development. Although overall poverty has gone down since the 1990s, the top 10% of earners make 26.5 times the average income, according to the Organization for Economic Cooperation and Development. The OECD says Chile is one of its most unequal member countries.

Piñera has been widely criticized for having dinner with his family Friday night in a wealthy part of the city while protests raged. According to Forbes, the former businessman has a net worth of about $2.8 billion. 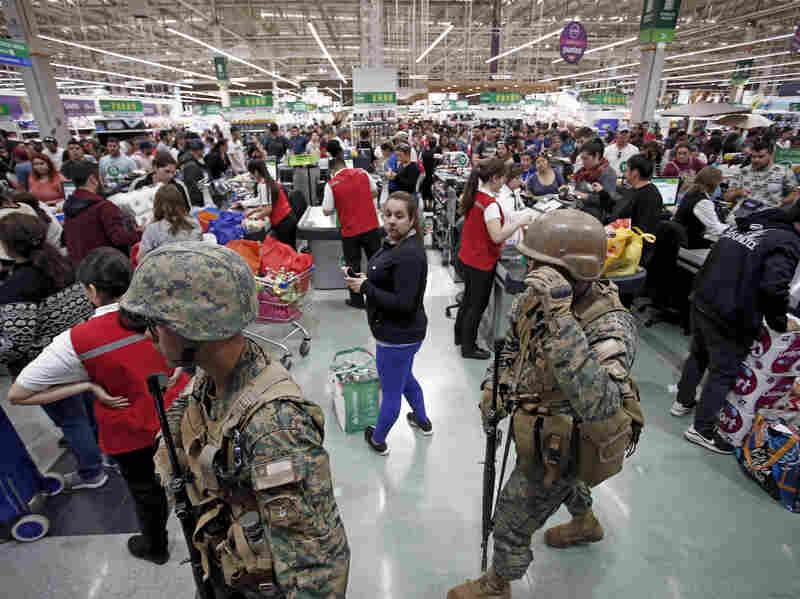 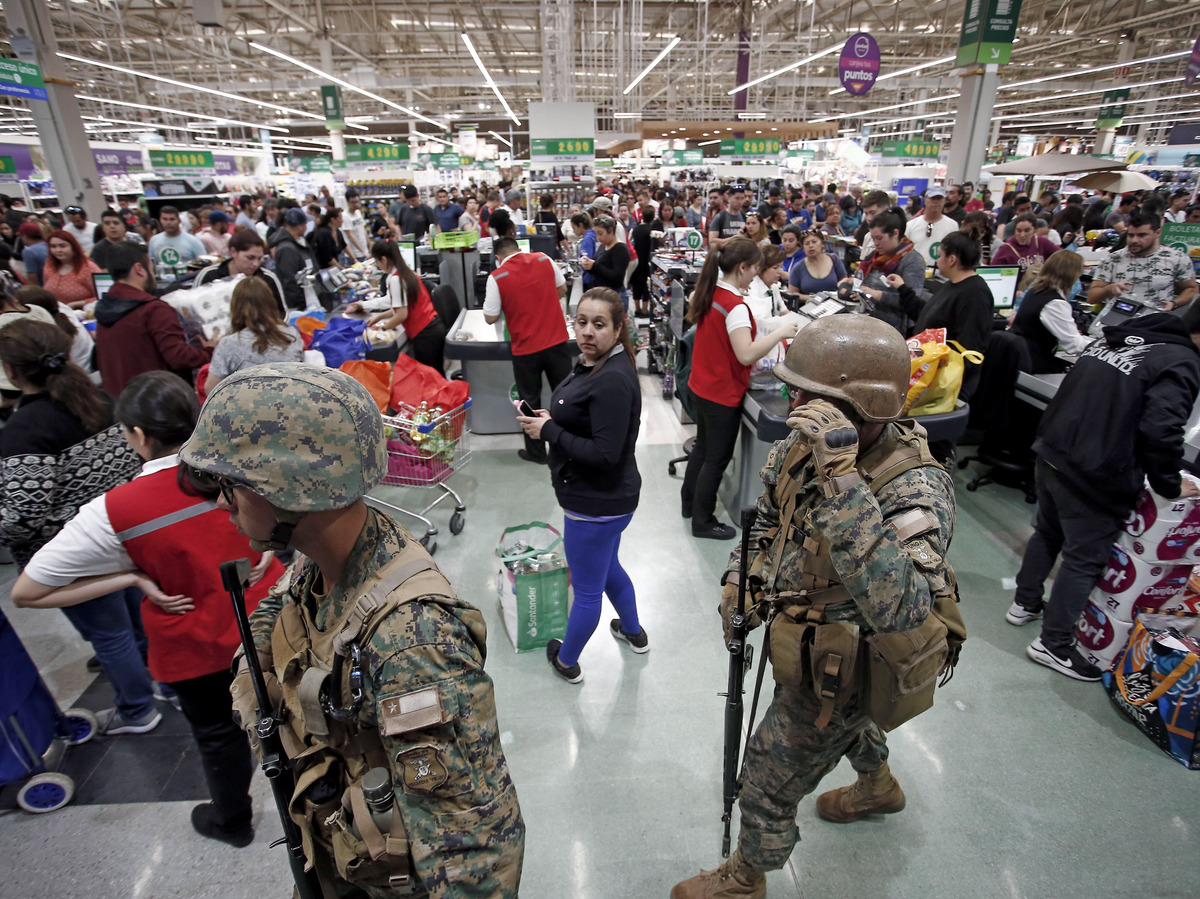 Military police stand guard at a supermarket as customers buy groceries in Santiago on Monday.

The scenes of unrest and armed forces have been stunning in a country often considered one of Latin America's most peaceful and stable democracies.

Most of the deaths occurred during fires set by looters, officials say. But Interior Deputy Minister Rodrigo Ubilla said a few of the fatalities were at the hands of security officials and that the incidents are under investigation.

About 10,500 police and soldiers are deployed in Santiago, according to Interior Minister Andrés Chadwick.

Troops seem to be everywhere: metro stations, major plazas, shopping centers and throughout the streets.

During one of the protests on Monday, police clad in riot gear shot tear gas and water cannons to disperse protests. Many of the demonstrators refused to run — carrying signs reading "They even took fear away from us."

As of late Monday, more than 1,500 people were arrested during recent days of protests, the interior minister told reporters.

On top of the strong military presence, three consecutive nights of curfews and long lines at the few open supermarkets have made many Chileans say it is reminiscent of the dictatorship.

Human rights advocates at Amnesty International and Human Rights Watch expressed alarm at the treatment of demonstrators by security forces. 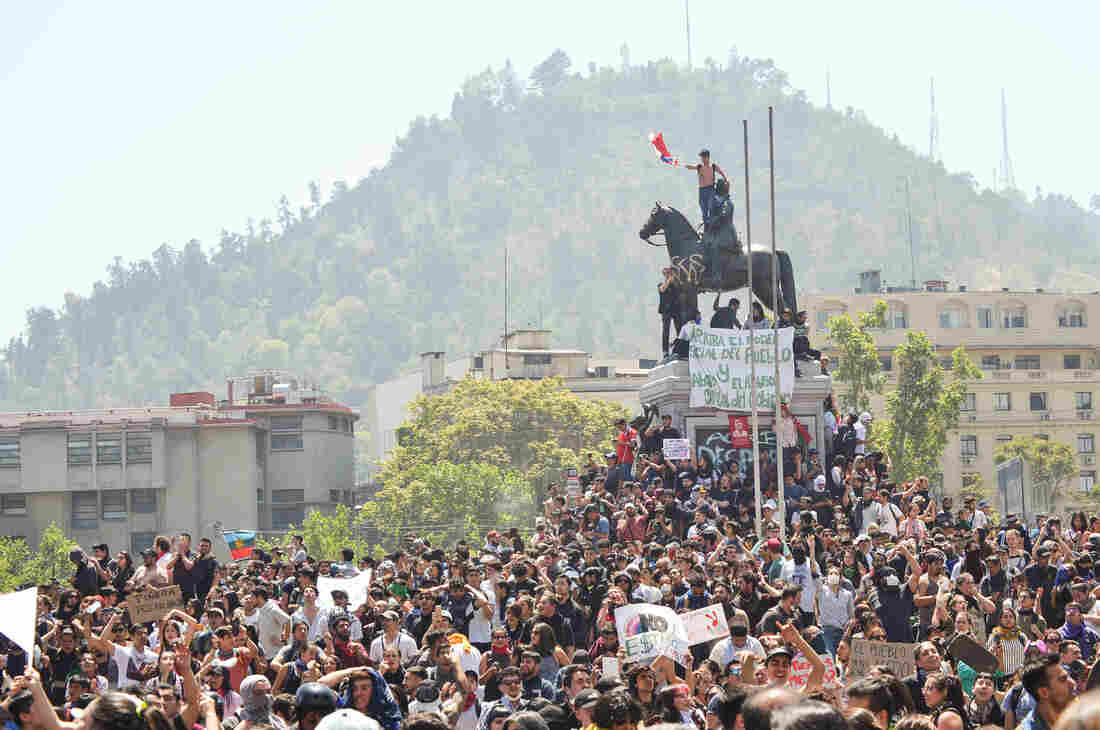 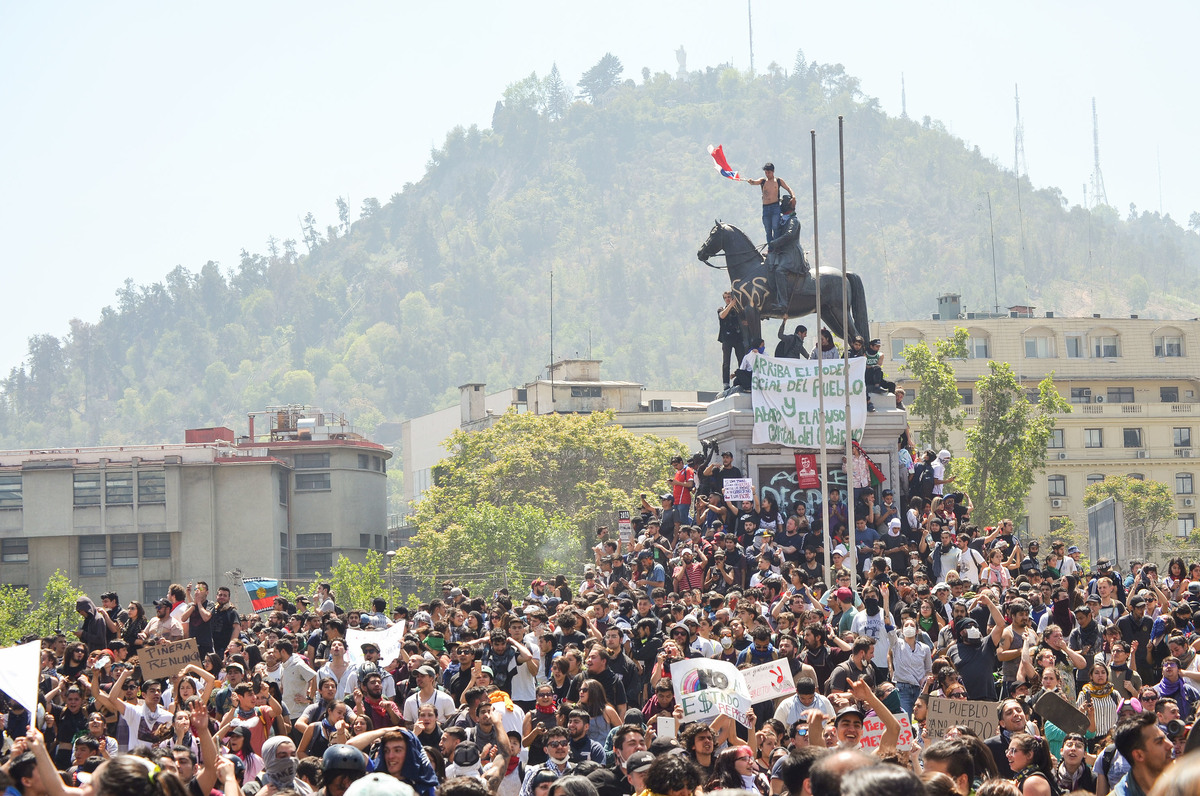 When Piñera referred to the violence and destruction on Sunday by saying "We are at war," it further enraged protesters. Many have carried signs all over the city reading, "We are not at war, we are united."

Protester Rosa Hueraleo, 56, denies there's a "war" and stresses that most Chileans do not support violence.

"The president isn't giving any solutions — all he does is criminalize the movement, nothing more," she says. "Although the metro fare is suspended, it's not enough — we want better education, health care, higher wages."

If Piñera thinks the 4% metro fare cut is sufficient, Hueraleo says, it shows he is not capable of understanding what the people really want.

Damages to the metro system alone have reached $300 million, according to Metro President Louis De Grange.

Most of the metro system is expected to be closed through the week, the government said. So far this week in Santiago, classes have been canceled and only limited stores and supermarkets have been open.

Javier Aguilo, 25, says he plans to protest all week until things change.

"There's two Chiles here," he says. "The one where people go to beautiful schools, have nice homes, can go on vacations everywhere, and then there is the other Chile where people have to live with $500 a month and pay for food with credit."

These protests come just weeks before the city is due to host two major international conferences. Meetings of the Asia-Pacific Economic Cooperation group, or APEC, are set for mid-November and the United Nations climate conference known as COP25 is in December.

Aguilo says he's glad the world will finally be able to see the real Chile, and not the perfect one the president has been selling abroad.