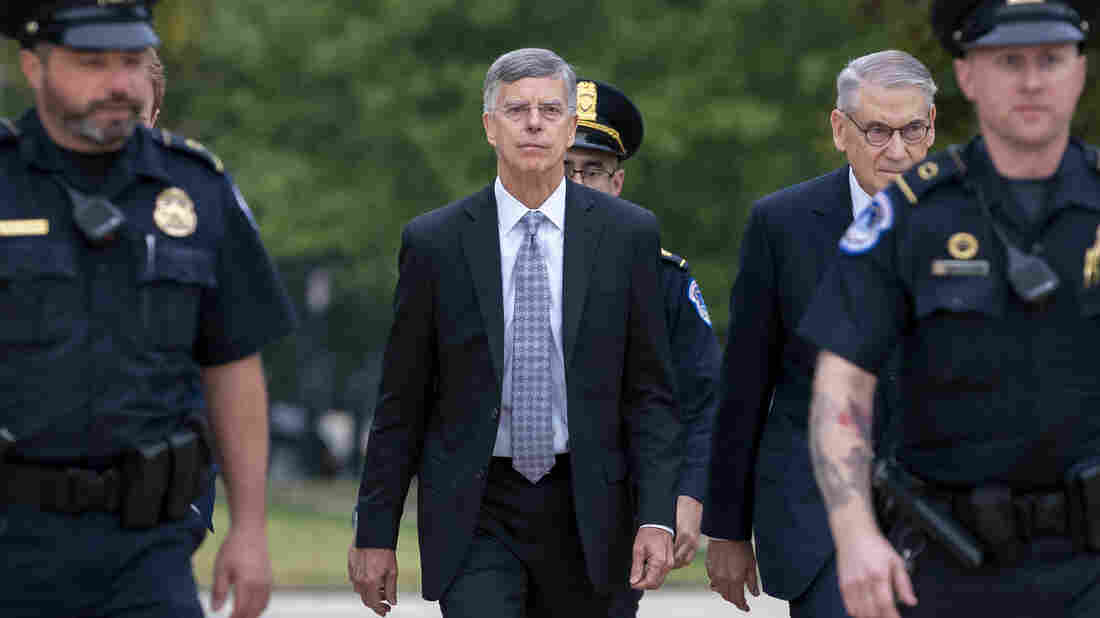 Acting Ambassador William Taylor is escorted by U.S. Capitol Police on Tuesday as he arrives to testify before House committees as part of the Democrats' impeachment inquiry into President Trump. J. Scott Applewhite/AP hide caption 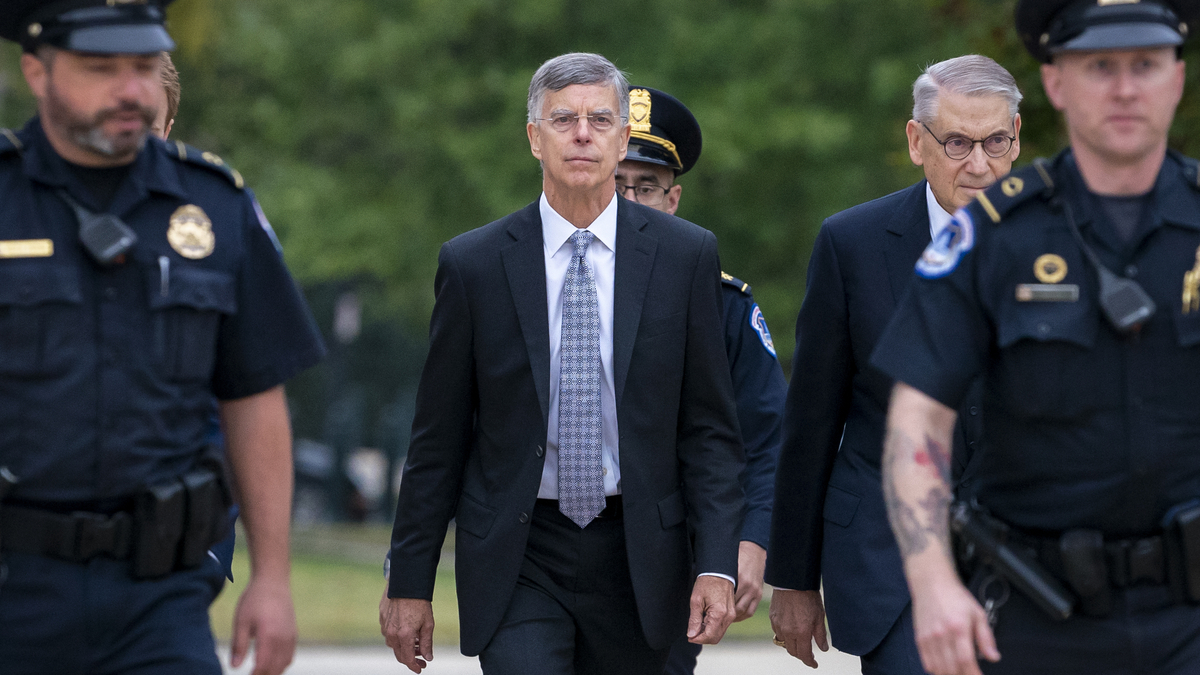 Acting Ambassador William Taylor is escorted by U.S. Capitol Police on Tuesday as he arrives to testify before House committees as part of the Democrats' impeachment inquiry into President Trump.

Longtime U.S. diplomat William Taylor told lawmakers on Capitol Hill on Tuesday that President Trump orchestrated a parallel foreign policy for Ukraine that made U.S. aid to the country contingent on investigations to help himself politically.

Taylor's testimony behind closed doors levels the most serious charges against Trump to date and supports allegations that the president and his political allies did tie engagement and military assistance — intended to help combat threats from Russia.

The written testimony has been obtained by multiple news outlets, including The New York Times and The Washington Post, and confirmed by NPR. Beyond the 15-page written testimony, Taylor's hours of answers are not publicly known.

Trump has denied there was any quid pro quo with regards to Ukraine and just Tuesday morning controversially compared the impeachment threat he's facing from the Democratic-led House to a "lynching."

In response to reports about Taylor's testimony, White House press secretary Stephanie Grisham said in a statement that Trump "has done nothing wrong — this is a coordinated smear campaign from far-left lawmakers and radical unelected bureaucrats waging war on the Constitution. There was no quid pro quo. Today was just more triple hearsay and selective leaks from the Democrats' politically-motivated, closed door, secretive hearings."

Taylor, a respected diplomat who served as ambassador to Ukraine in the George W. Bush administration, wrote that he was reluctant to accept an interim appointment to the same post again after Marie Yovanovitch was abruptly withdrawn, having faced a smear campaign from the White House.

But Taylor said in his written statement that he was compelled to take the post because he believed strongly that a robust U.S. foreign policy must include helping Ukraine. That's why he was so shaken when he realized there was an "irregular, informal" foreign policy being run outside the typical diplomatic channels and the U.S. State Department. Taylor also said that then-national security adviser John Bolton also shared his concerns over the Ukraine run-around and supported giving the aid to Ukraine.

Taylor pointed the finger at Giuliani and said it became increasingly clear to him over the summer that American military assistance to Ukraine and a promised meeting between Trump and new Ukrainian President Volodymyr Zelenskiy were contingent on Zelenskiy cooperating with the investigations that Trump and Giuliani wanted.

Those investigations were twofold — a debunked conspiracy theory that the Democratic National Committee's server that was hacked in 2016 was in Ukraine; along with pressuring him to investigate Burisma, the Ukrainian energy company whose board Hunter Biden (son of former Vice President Joe Biden, one of Trump's chief possible 2020 rivals) sat on.

Taylor said that in a July 18 video conference call, a staff person with the Office of Management and Budget said there was a hold on security assistance to Ukraine "but could not say why." Taylor added:

"I and others sat in astonishment — the Ukrainians were fighting the Russians and counted on not only the training and weapons, but also the assurance of U.S. support. All that the OMB staff person said was that the directive had come from the President to the Chief of Staff to OMB. In an instant, I realized that one of the key pillars of our strong support for Ukraine was threatened. The irregular policy channel was running contrary to the goals of longstanding U.S. policy."

Taylor said he sent a cable to Secretary of State Mike Pompeo on Aug. 29 decrying the "folly" that he believed was unfolding to withhold the funds — which had already been appropriated by both the House and the Senate — and that he could not defend such a policy. He also stated that "the hold on security assistance for Ukraine came from [acting] Chief of Staff Mick Mulvaney and that the Chief of Staff maintained a skeptical view of Ukraine."

In a press briefing last week, Mulvaney defended the administration's actions and admitted that the aid had been held up over a desire for Ukraine to cooperate with an investigation into the 2016 campaign, though he later tried to walk back those remarks.

"Get over it," Mulvaney told reporters in the briefing room. "There's going to be political influence in foreign policy."

When Trump finally held a July phone call with Zelenskiy — a whistleblower account that first spurred this controversy around Ukraine — Taylor said he was kept off the call and never received a readout of it until the White House released a partial transcript of the conversation in September.

Taylor's profile in relation to the impeachment inquiry rose with the release of a series of text messages that included him and European Union Ambassador Gordon Sondland, who gave his own testimony to impeachment investigators last week.

In a text on Sept. 9, Taylor wrote to Sondland: "I think it's crazy to withhold security assistance for help with a political campaign."

Sondland responded: "Bill, I believe you are incorrect about President Trump's intentions. The President has been crystal clear no quid pro quo's of any kind."

On Tuesday, Taylor said that on a phone call, Sondland "told me that President Trump had told him that he wants President Zelenskyy to state publicly that Ukraine will investigate Burisma and alleged Ukrainian interference in the 2016 U.S. elections."

In a later conversation with Sondland, Taylor said the EU ambassador told him Trump was "adamant" that Zelenskiy "had to 'clear things up and do it in public,' " but that such a request "was not a 'quid pro quo.' "

Trump wanted Zelenskiy to do so in an interview with CNN. It was made clear that "if President Zelenskyy did not clear things up in public, we would be at a stalemate," which Taylor understood to "mean that Ukraine would not receive the much-needed military assistance."

Taylor also said that Sondland and U.S. Special Envoy to Ukraine Kurt Volker told him that "Trump is a businessman. When a businessman is about to sign a check to someone who owes him something ... the businessman asks that person to pay up before signing the check."

Taylor said he "argued to both that the explanation made no sense: the Ukrainians did not 'owe' President Trump anything, and holding up security assistance for domestic political gain was 'crazy,' as I had said in my text message to Ambassadors Sondland and Volker on September 9."

"I walk away with the impression that Mr. Sondland's going to have some explaining to do," Krishnamoorthi said.

The Illinois Democrat also said he wouldn't be surprised if House Intelligence Chairman Adam Schiff, D-Calif., calls Sondland for public testimony. Schiff declined to comment to reporters about Taylor's testimony as he exited the hearing.

Rep. Tom Malinowski, a former assistant secretary of state and freshman Democrat from New Jersey, said what he heard from Taylor is nothing like anything he experienced while working in the State Department.

"This is completely outside the furthest boundaries of what any career diplomat would have thought possible," he said.

"I want to be careful about characterizing testimony," said Rep. Gerry Connolly, D-Va. "I will say this — nothing I've heard contradicts the underlying narrative. Quite the contrary, it further corroborates that narrative in virtually all respects."

Ukraine Impeachment Inquiry Resumes With Diplomat Who Warned Of 'Nightmare'

"I think for all of us, we're trying to see if any witness has a connection between foreign aid and pausing the foreign aid as it relates to the quid pro quo. We haven't had any witness suggest that," the staunch Trump ally said.

Taylor is an Army veteran and a longtime foreign service officer who has worked in the Middle East, Afghanistan and Ukraine.

NPR's Susan Davis and Tamara Keith contributed to this report.