Accessibility links
'Ecstasy And Terror' Review: Daniel Mendelsohn's Essays Educate And Entertain Daniel Mendelsohn is a living answer to the question, "What will a degree in Classics do for you?" His new essay collection, Ecstasy and Terror, "cross-pollinates" the classics with popular culture. 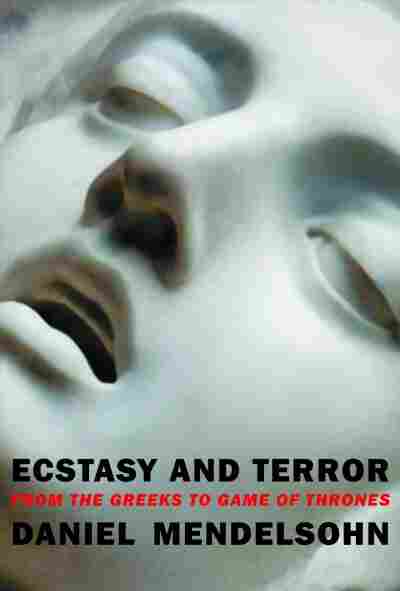 From the Greeks to Game of Thrones

This past summer, I made time to catch up on a book I'd missed when it was published two years ago. Ever since, I've been telling friends, students and random strangers on a train that they must read Daniel Mendelsohn's memoir called An Odyssey. In it, he recalls teaching a seminar on Homer's Odyssey that his then 81-year-old father sat in on as an auditor.

An Odyssey is the best account of what teaching is really like that I've ever read; it's also (like Homer's epic) a spell-binding story about the tenderness of a father-son bond, as well as the inevitable limits that one's own personality and mortality impose on that bond.

Mendelsohn has just brought out a new book called Ecstasy and Terror. The topics here range from a rumination on the mystery of one of the world's most famous buildings — the Parthenon — to the unconsciously mythic underpinnings of the ways America continues to try to make sense of the JFK assassination.

In the final essay, called "A Critic's Manifesto," Mendelsohn recalls why he fled the theory-encrypted halls of academe after getting his Ph.D. in Classics. He yearned to become a critic who writes for a wide audience, although, as Mendelsohn cheerfully admits, his writing characteristically "cross-pollinates" the classics with contemporary popular culture.

A Father And Son Go On Their Last 'Odyssey' Together

Lots of critics routinely make light references to Greek myth and literature, but in Mendelsohn's writing such connections mean something, they illuminate more than his own glibness. For instance, in a 2013 essay for The New Yorker called, "Unburied," Mendelsohn reflects on the controversy over what to do with the body of the Boston Marathon bomber, Tamerlan Tsarnaev, "a cadaver seemingly so morally polluted ... that no cemetery world bury it."

Prodded by the arguments of Sophocles tragedy Antigone, in particular, Mendelsohn arrives at the controversial conclusion that calling Tsarnaev a "monster," as some residents of the Virginia town where he's finally buried are doing, is inaccurate:

To call him a monster is to treat this enemy's mind precisely the way some would treat his unburied body; which is to say, to put it beyond the reach of human consideration — and therefore, paradoxically, to refuse to confront his "monstrosity" at all.

As that essay shows, Mendelsohn's grounding in the Classics gives a larger reach to his essays beyond the news of the day. In his scope and suppleness as a writer, Mendelsohn is a living answer to the question, "What will a degree in Classics do for you?"

The one flat essay in this collection is, unfortunately, is the one readers won't need to be sold on: namely, the Game of Thrones essay. Called "The Women and the Thrones" it's "off" in its sense of audience, containing so much plot summary that devoteés of the show will be bored and non-initiates will be numbed.

Mendelsohn's rare fail makes you appreciate just how hard it is to pull off his distinctive blend of storytelling energy, erudition and emotional resonance. Nowhere is that charmed triad more in evidence than in the final autobiographical section of this collection.

Two of the essays here are nuanced tributes to two older women who were unlikely mentors to him. One was Mary Renault, a once-famous writer of historical novels set in Ancient Greece. As a teenager, Mendelsohn recalls he read Fire from Heaven, a novel about Alexander the Great, and was moved to write a letter to Renault, thus starting a correspondence that would last years. Mendelsohn, who is gay, also recalls that, "Alexander the Great was my first serious crush."

And, that last essay, about becoming a critic, is a must-read in this age where expertise is so often airily dismissed. Thinking about the critics he worshipfully read in The New Yorker as a teenager, among them Helen Vendler and Pauline Kael, Mendelsohn says:

"I thought of these writers above all as teachers, and like all good teachers they taught by example; the example that they set, week after week, was to recreate on the page the drama of how they had arrived at their judgments. ...

Even when you disagreed with them, their judgments had authority, because they were grounded in something more concrete, more available to other people, than "feelings" or "impressions."

Mendelsohn, of course, could be talking about the source of his own hard-earned authority as a critic. To read a signature Mendelsohn essay is to be educated and entertained, and, always, freshly aware of how much more there is to read and know.