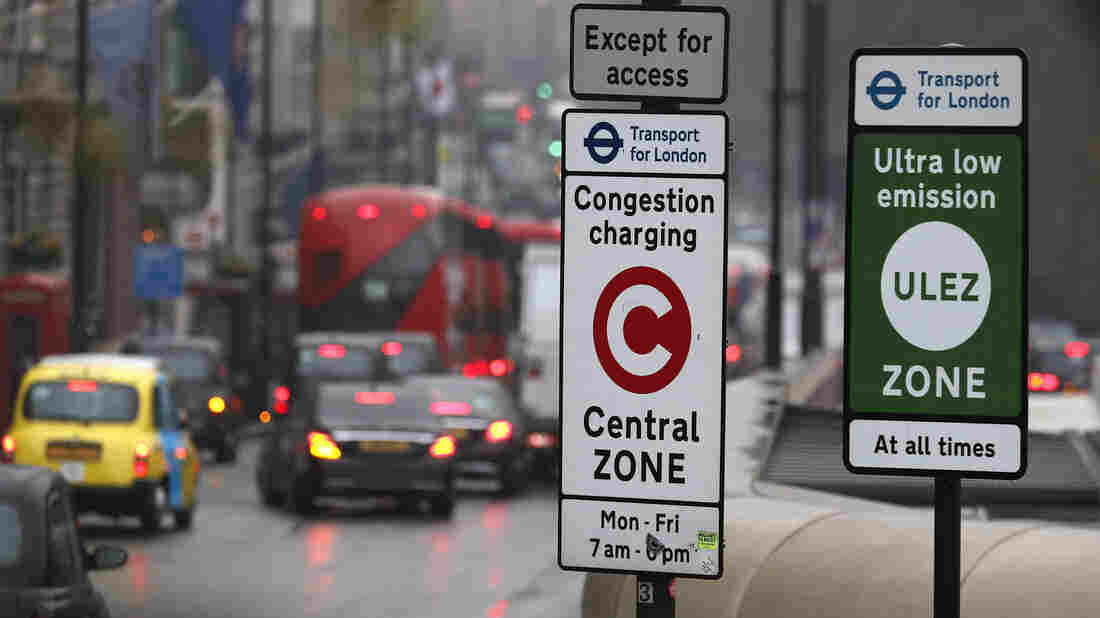 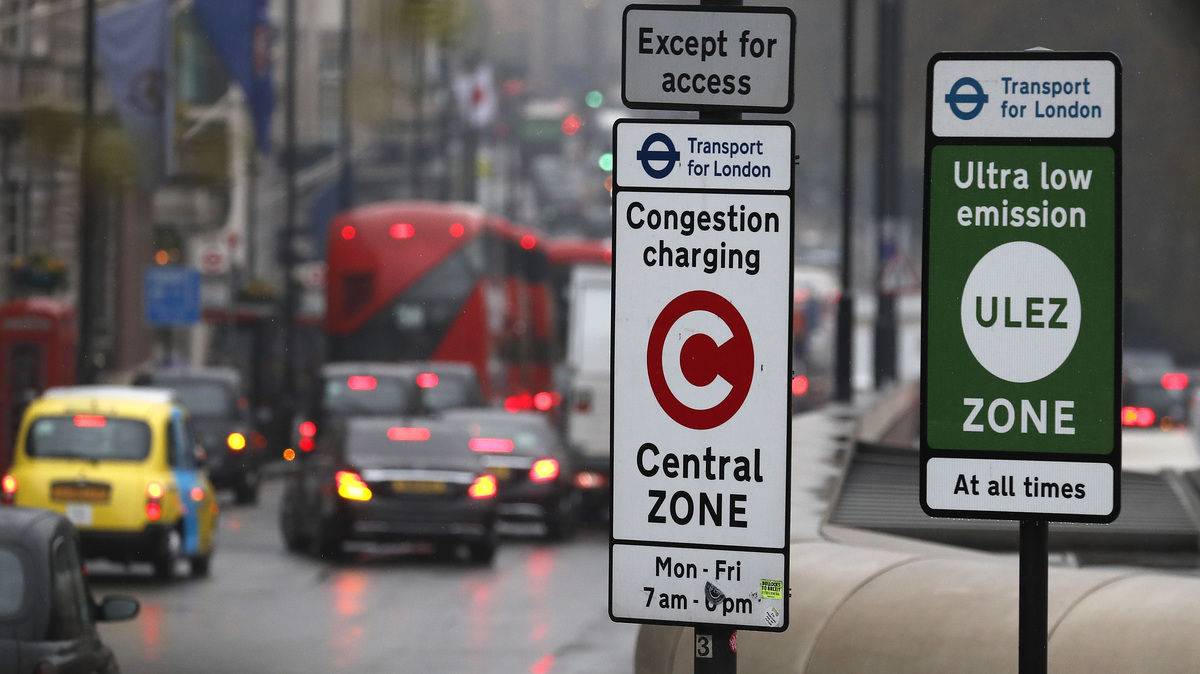 Signs in London designate the Ultra Low Emission and Congestion Charging zones for cars driven into the city's center.

London says toxic air pollution has fallen by roughly a third inside a central urban zone where drivers are required to meet specific emission standards or pay a daily fine. The city launched the Ultra Low Emission Zone in April.

The city's report states that about 13,500 fewer polluting cars are driven in the zone daily, and that traffic has decreased overall in the bustling area.

According to the report, nitrogen dioxide pollution has fallen by 36% in the central zone since February 2017, when the city first announced a "toxicity charge" on older vehicles.

London Mayor Sadiq Khan announced the new ULEZ charges after seeing an increase in children suffering chronic illness and lung damage from air pollutants. He says the new report shows the move was a step in the right direction.

Roadside nitrogen dioxide pollution has reduced by one third in the #ULEZ zone since we launched it six months ago - a huge improvement as we work to clean up toxic air and protect our children’s lungs. #LetLondonBreathe#DeliveringChangeForLondonhttps://t.co/duRRHa4wDL

"I am determined to stop Londoners breathing air so filthy it is damaging our children's lungs and causing thousands of premature deaths," Khan says. "The ULEZ shows what we can achieve if we are brave enough to implement such ambitious policies."

The implementation of the ULEZ has been called "radical" because of its 24/7 regulation and strict emission standards. Some small-business owners expressed concerns about how the additional cost burden of buying new cars or paying steep charges might affect them.

Despite the criticism, the city plans to expand the zone's borders in 2021 to include London's inner suburbs bounded by the North and South Circular roads that effectively ring the city. An online petition that was created to protest the expansion has garnered more than 95,000 signatures.

Approximately 80% of Fairfield Ward will sit within this zone.

In response to the petition, Khan's public liaison says air pollution is "a national health crisis" that is reducing life expectancy.

"While the Mayor is also acting on other sources [of pollution], road transport is the greatest contributor to air pollution in London," the statement says. "There is no way to make the massive improvements needed to London's air quality without tackling the most polluting vehicles and so this must be a focus for action."

The zone is part of Khan's continued efforts to improve London's air quality. All cars, not just ones below emission standards, must pay a daily charge of 11.50 pounds (nearly $15) if they drive within central London between 7 a.m. and 7 p.m. The city says the money will go toward improving the transportation network.

Other major cities around the world are introducing vehicle regulations and bans that are meant to reduce air pollution and make urban areas more livable.

In 2016, Paris banned cars made before 1997 from the city center on weekdays; it also recently declared the first Sunday of every month to be car-free. And earlier this month, San Francisco officials voted to ban cars from Market Street, the city's downtown spine.