Accessibility links
Nationals Beat Astros 5-4 In Game 1 Of World Series Washington's Juan Soto was a standout, blasting a solo home run, then a two-run double that gave his team a lead over Houston that the Nationals never lost. His 21st birthday is Friday. 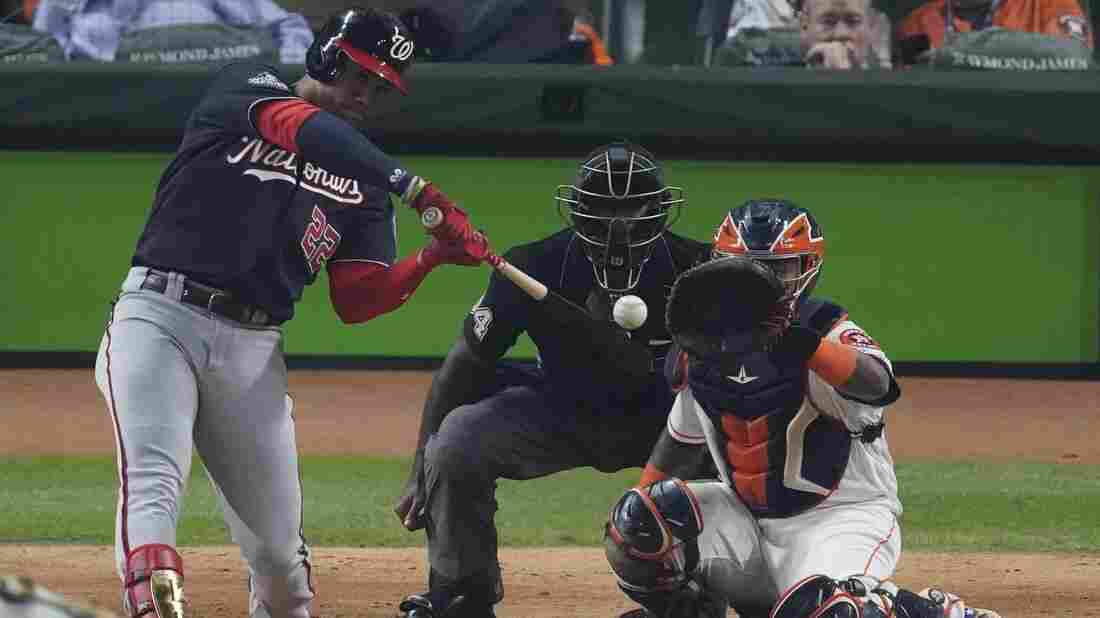 Washington Nationals' Juan Soto blasts a home run during the fourth inning of Game 1 of the World Series against the Houston Astros on Tuesday. Eric Gay/AP hide caption 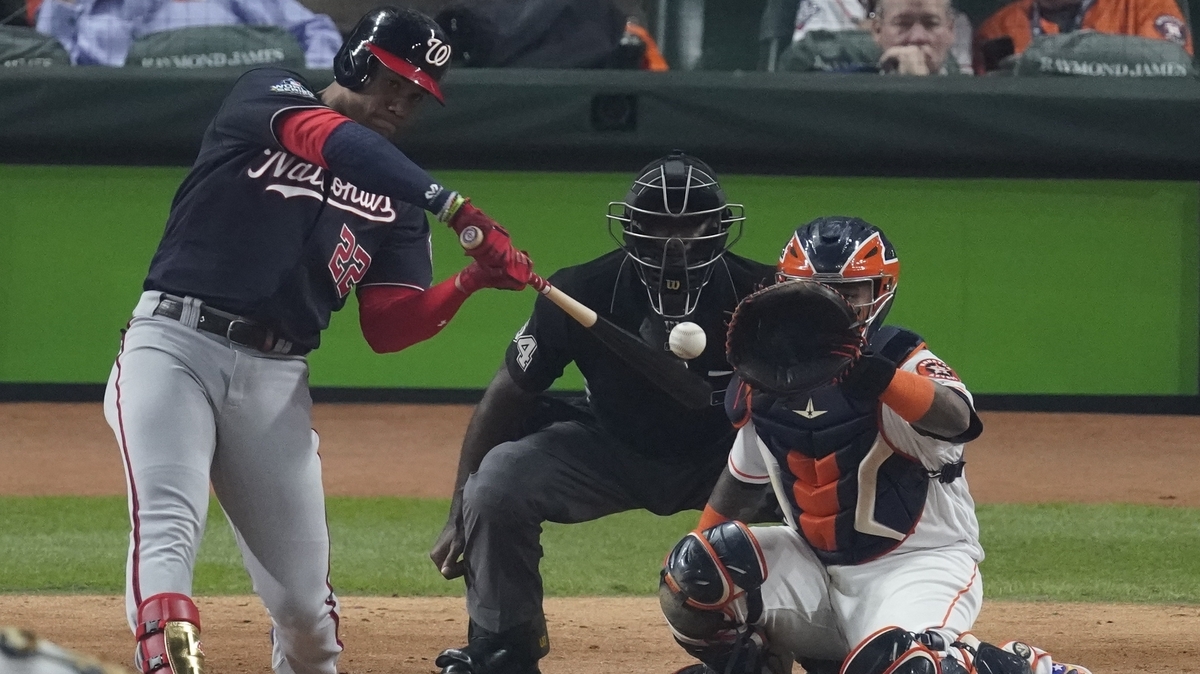 Washington Nationals' Juan Soto blasts a home run during the fourth inning of Game 1 of the World Series against the Houston Astros on Tuesday.

The Washington Nationals beat the Houston Astros 5-4 in Game 1 of the 2019 World Series, led by Juan Soto who homered and doubled in his first Series game.

Soto also had a single and a stolen base to go with his 3 RBIs. The young standout turns all of 21 on Friday.

The victory gives the Nationals what they wanted: a win in Houston against one of baseball's best pitchers, Gerrit Cole. It was Cole's first loss since May. 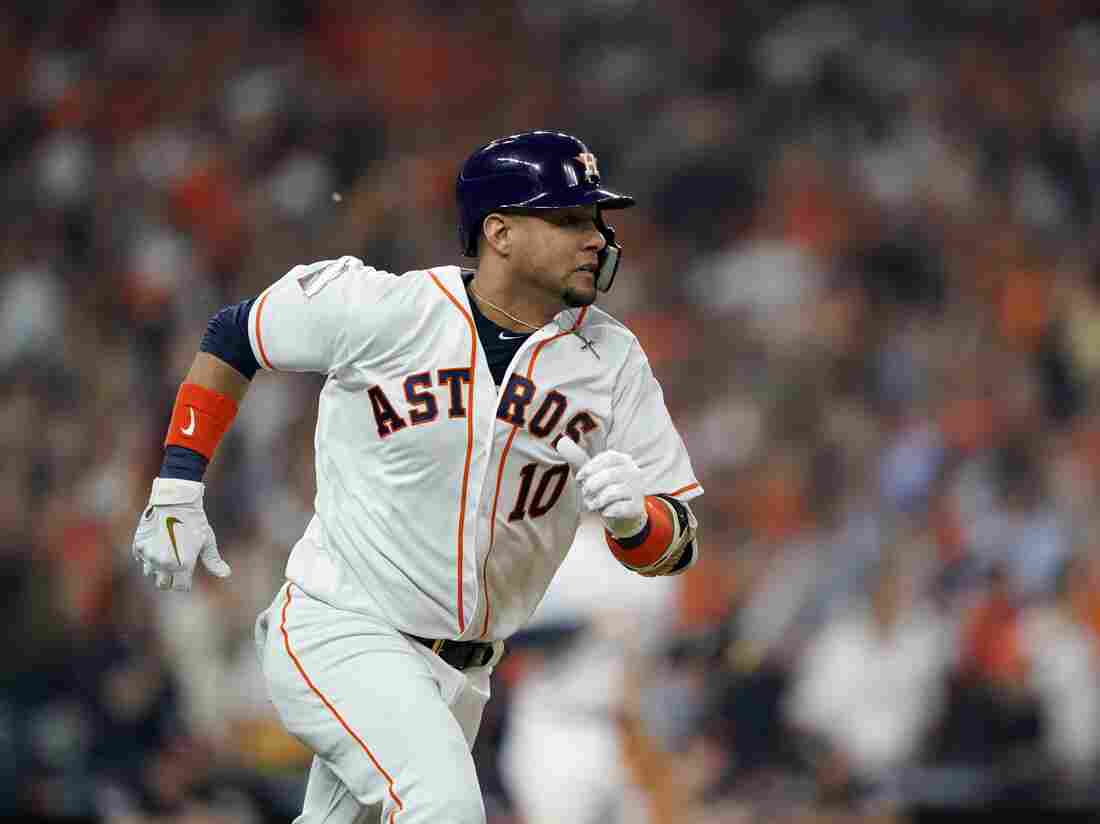 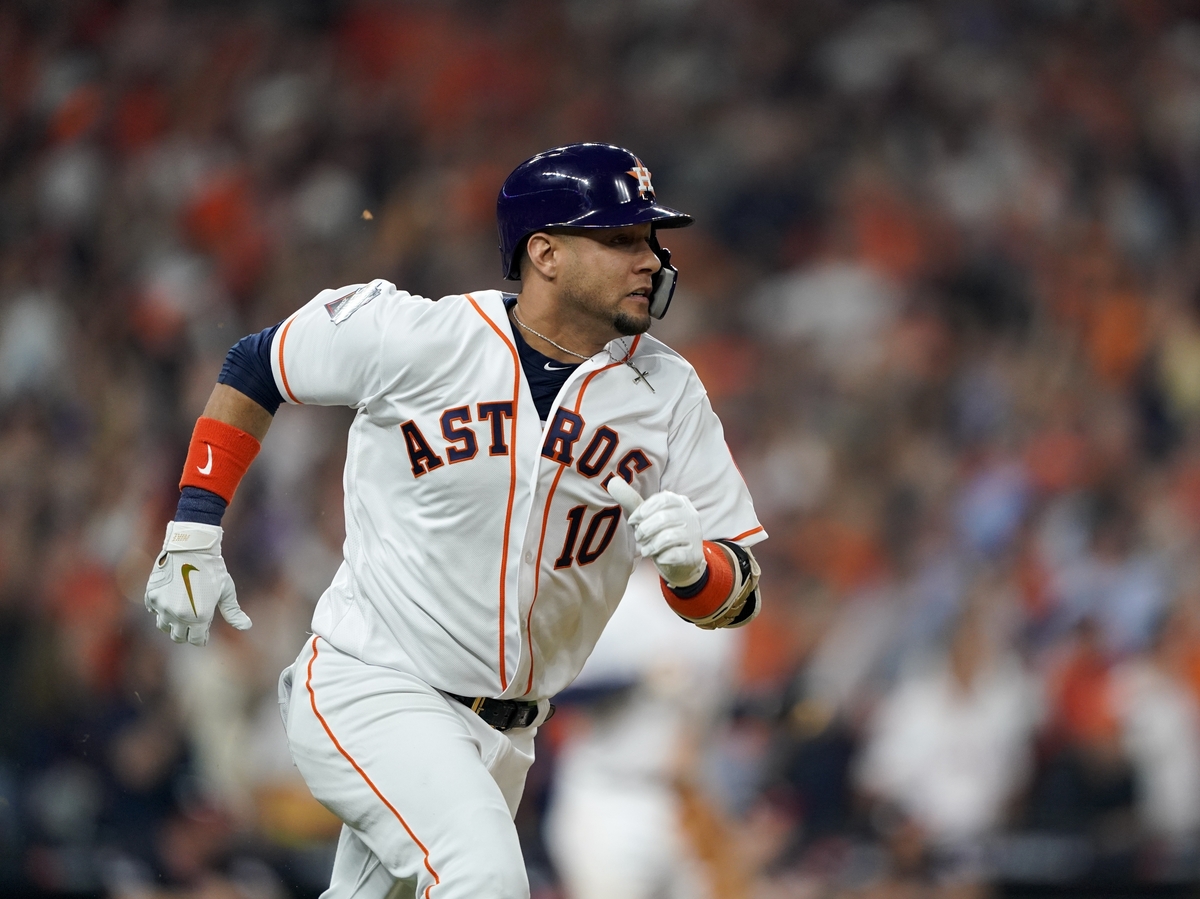 The Nationals responded in the top of the second inning with a solo home run by Ryan Zimmerman on a two-out, first pitch by Cole.

The 35-year-old Zimmerman was the Nationals' first player to be drafted by the franchise after its move from Montreal to Washington, D.C., in 2005.

"It's been a long ride," Zimmerman said, according to the AP. "First at-bat, to hit a home run and run around the bases, you're kind of almost floating around the bases."

"I'll be honest with you, my eyes got a little watery for him," manager Dave Martinez said. "He waited a long time to be in this position, and for him to hit that first home run and put us on the board was awesome."

The Nationals evened the score at 2-2 on Soto's solo home run off of Cole to open the fourth frame.

Washington, the National League champions, took the lead for good in the top of the fifth inning on a single by third baseman Adam Eaton that scored Kurt Suzuki, who had opened the inning with a walk, making the score 3-2. Two batters later, Soto smacked a two-run double to left field, bringing the score to 5-2.

The Astros narrowed the lead to 5-3 in the bottom of the seventh inning with a solo home run by Springer off of Nats reliever Tanner Rainey. They loaded the bases on two walks and an infield hit, then Daniel Hudson relieved Rainey and closed the inning by striking out Yordan Alvarez.

The Astros opened the bottom of the eighth inning with a single by pinch-hitter Kyle Tucker, who advanced to second on a flyout and then scored on a double by Springer, cutting the lead to 5-4.

Nats ace reliever Sean Doolittle, the fifth pitcher put in play by the team, retired the Astros in the bottom of the ninth inning without incident. The Astros left 11 runners on base; the Nationals, only four.

At a sober postgame news conference, Astros manager AJ Hinch acknowledged it was not the opener he had expected.

"[Cole's] been so good for so long that there builds this thought of invincibility and that it's impossible to beat him," Hinch said according to the AP. "So when it happens it is a surprise to all of us."

"I didn't have my A-game tonight," Cole said. "Outside of a few pitches that tacked on a few runs, we worked pretty well with what we had. These are the two best teams in the world right now so you try not to beat yourself up too much, especially if you've got to grind in those situations."