Accessibility links
Why Some European Firefighters Are Setting Forests On Fire This year, the European Union has had almost triple the average number of wildfires. NPR follows a special unit into the woods in Spain to see how they let them burn for prevention. 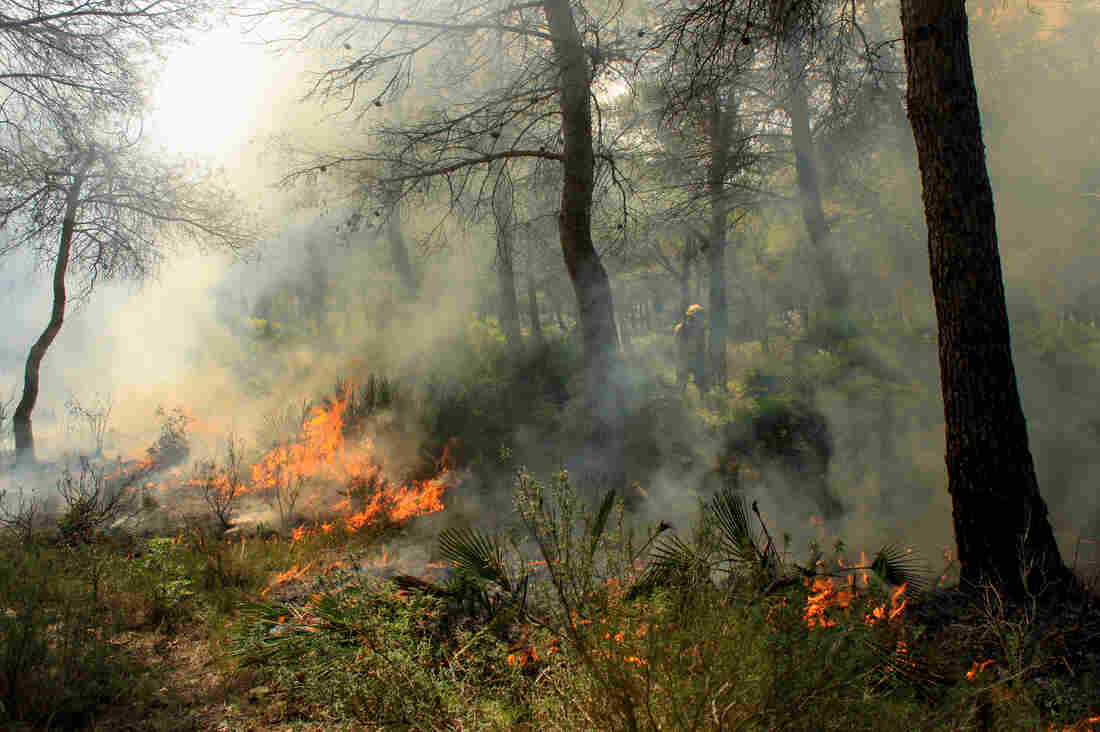 A firefighter participates in a controlled burn in a forest outside El Perelló in Catalonia, Spain, on Sept. 27. NPR followed a special unit into the woods in Spain to see how they burn for prevention. Aaron Labaree for NPR hide caption 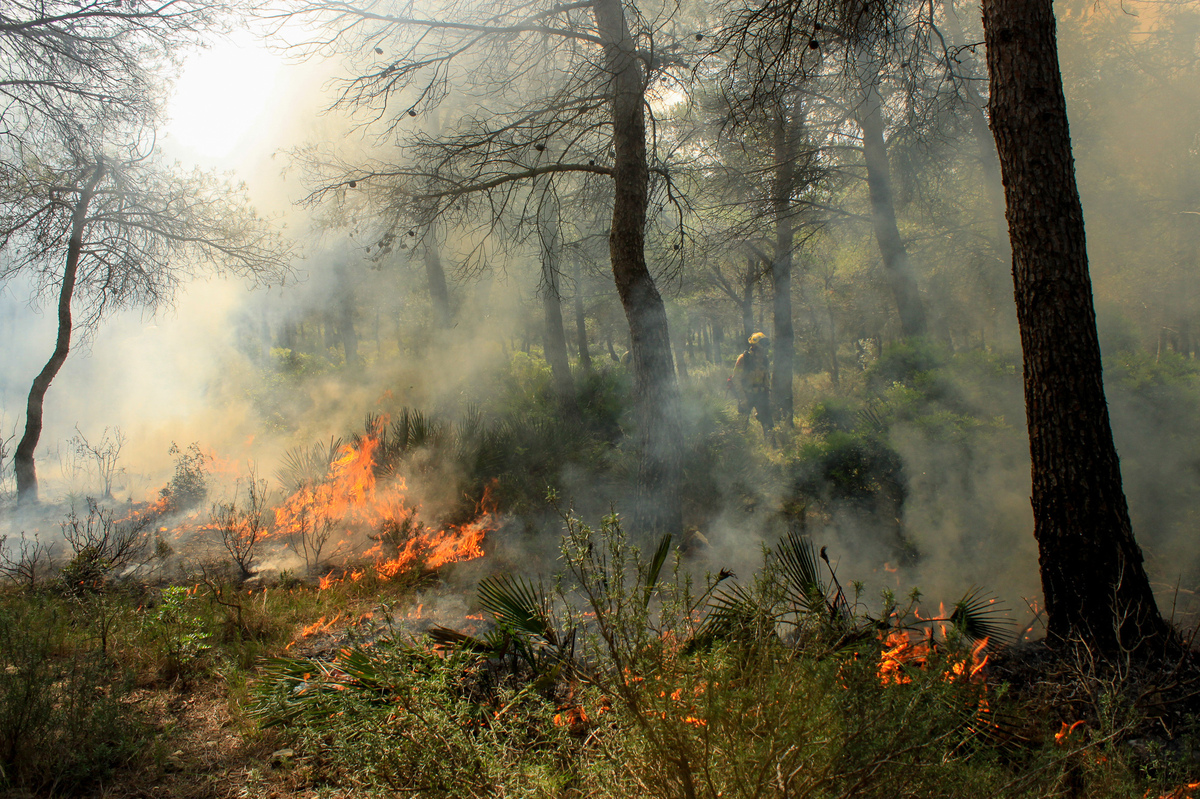 A firefighter participates in a controlled burn in a forest outside El Perelló in Catalonia, Spain, on Sept. 27. NPR followed a special unit into the woods in Spain to see how they burn for prevention.

The biggest wildfire in 20 years in Spain's Catalonia region began on June 26, when a pile of chicken manure, baking in record high temperatures, burst into flames.

Fed by strong winds, the flames spread quickly, igniting dry brush and pine forest. In three days the fire burned more than 16,000 acres, and it took more than 500 firefighters to put it out.

A Fire Lookout On What's Lost In A Transition To Technology

Fires in California and the Amazon rainforest have grabbed attention, but large areas of Europe's forests also were consumed this summer. Blazes nearly the size of the one in Catalonia tore through Spain's Canary Islands, the south of France and the Greek islands of Evia and Samos.

From January to mid-October, the European Union has had almost triple the average number of wildfires for the same period over the past decade, with more than 800,000 acres burned so far this year, according to the European Forest Fire Information System.

Heat waves like the ones Europe experienced in 2019 are far more likely to happen because of the changing climate. And hot, dry conditions contribute to making massive fires no longer just a southern European problem: Last year Sweden saw its biggest fires in modern history, and this year the United Kingdom had a record number of them. 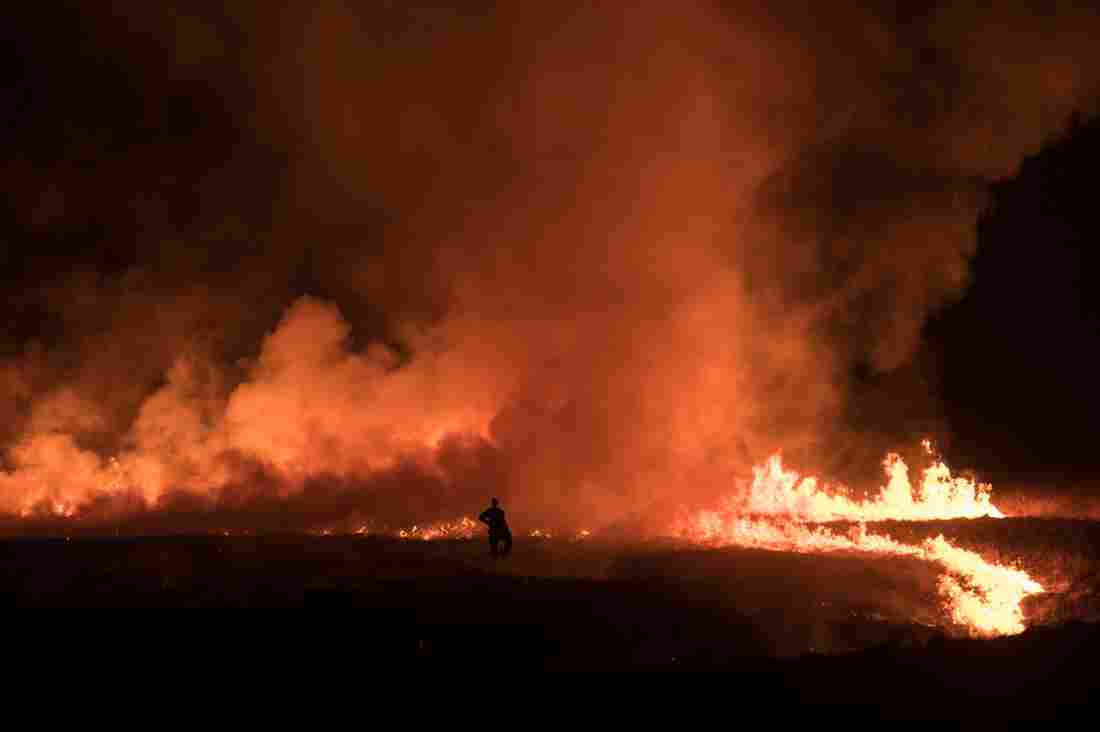 Firefighters tackle a blaze on moorland above the village of Marsden, England, on April 21. Oli Scarff/AFP/Getty Images hide caption 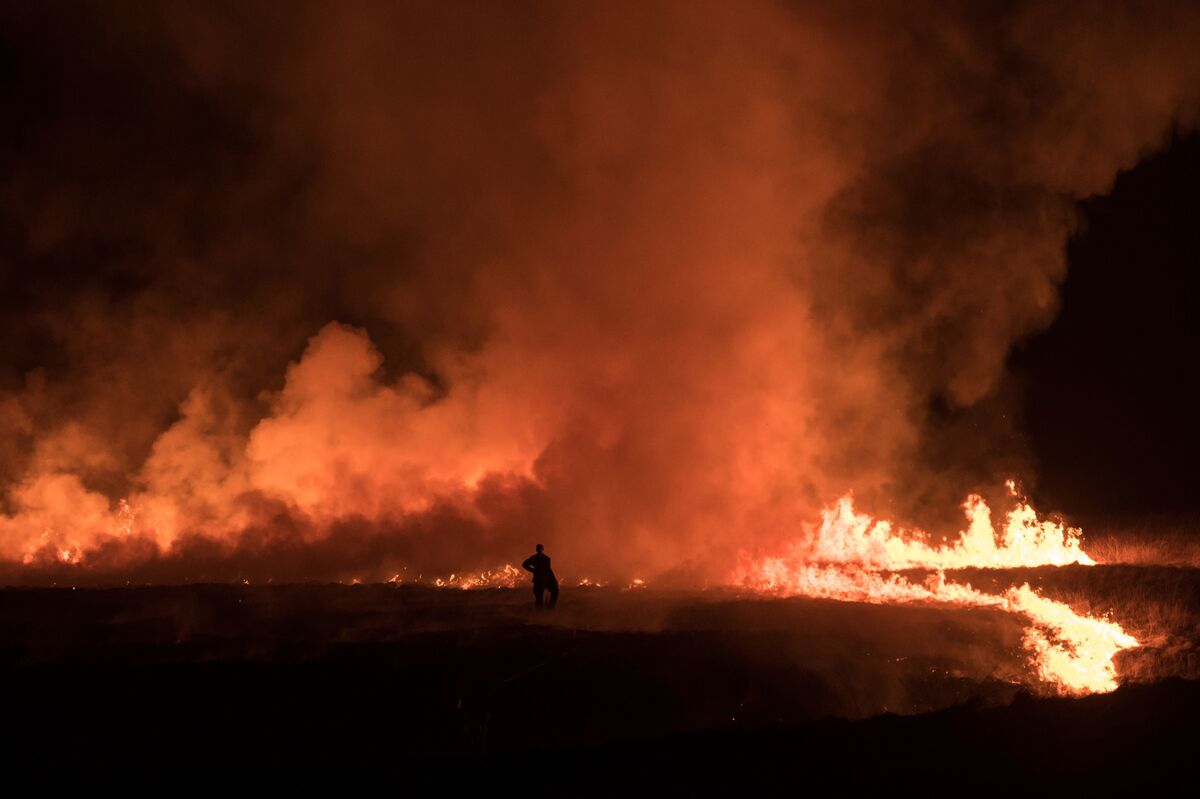 Firefighters tackle a blaze on moorland above the village of Marsden, England, on April 21.

Now, like in the United States, firefighters and ecologists in Europe are starting to realize that putting out each fire isn't possible or desirable. To prevent megafires, experts say, the authorities have to let forests burn naturally — and sometimes even set fires on purpose.

"We need to learn to live with fire, the same way we do with tornadoes or snowstorms," says Marc Castellnou, chief analyst for a special forest unit of Catalonia's fire services, known by its Catalan initials GRAF.

The wildfire problem is partly a result of decades of prevention. Fire plays a natural role in a healthy forest, burning away brush, dead trees and plant debris, while leaving many mature trees alive. But to protect human habitation, officials have tried to allow almost no fires to burn. The result is forests that are packed with undergrowth providing kindling and enormous unbroken stocks of trees to burn — megafires waiting to happen.

Europe's forests have reached this dangerous state for another reason not seen in the U.S.: rural abandonment.

"When I was growing up, all of this was harvest — hazelnuts and olives," says Rut Domènech, a forest expert who lives in Ribera d'Ebre, the county in Catalonia's Tarragona province where the recent fires took place, pointing at what is now continuous forest. In the 1950s, the price of these and other crops plummeted with international competition and farmers were forced to move to cities.

Over much of Europe, rural abandonment has led to once-cultivated fields being given back to nature. In the 50 years after World War II, Western Europe's forest area increased almost 30%. The continent's land is now more than 40% forested. 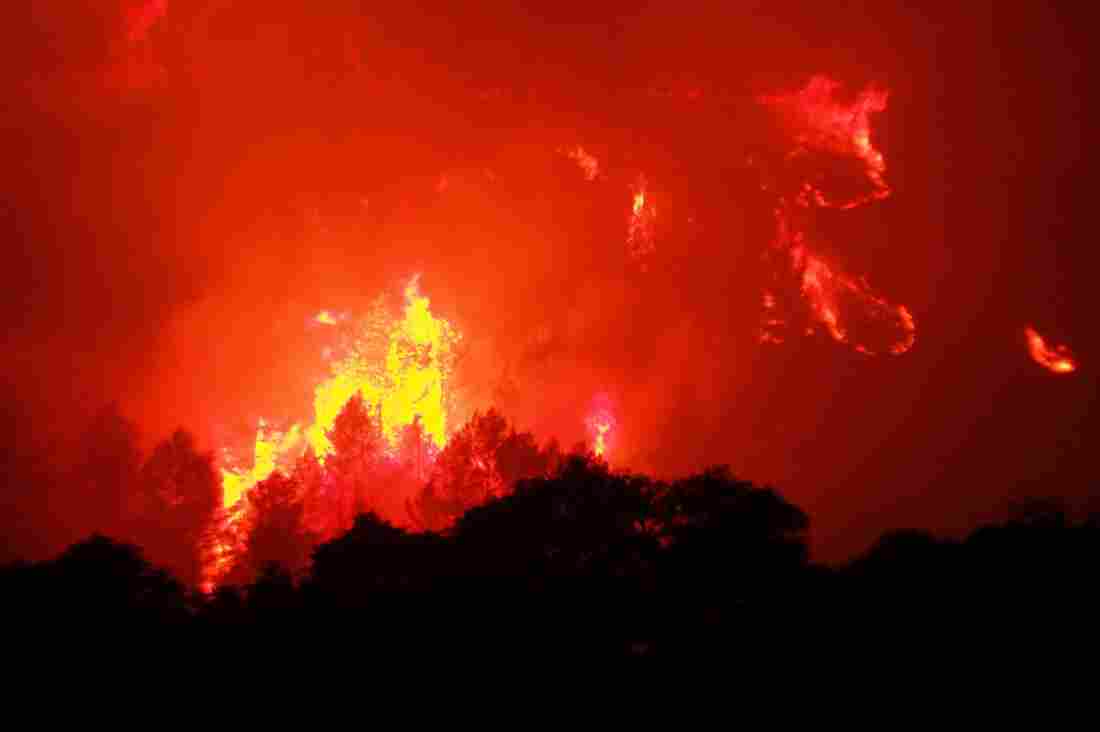 A fire near the village of Monze, in the Aude department of southern France, on Aug. 15. The fire, which broke out the day before following a drought, burned up more than 2,000 acres. Raymond Roig/AFP/Getty Images hide caption 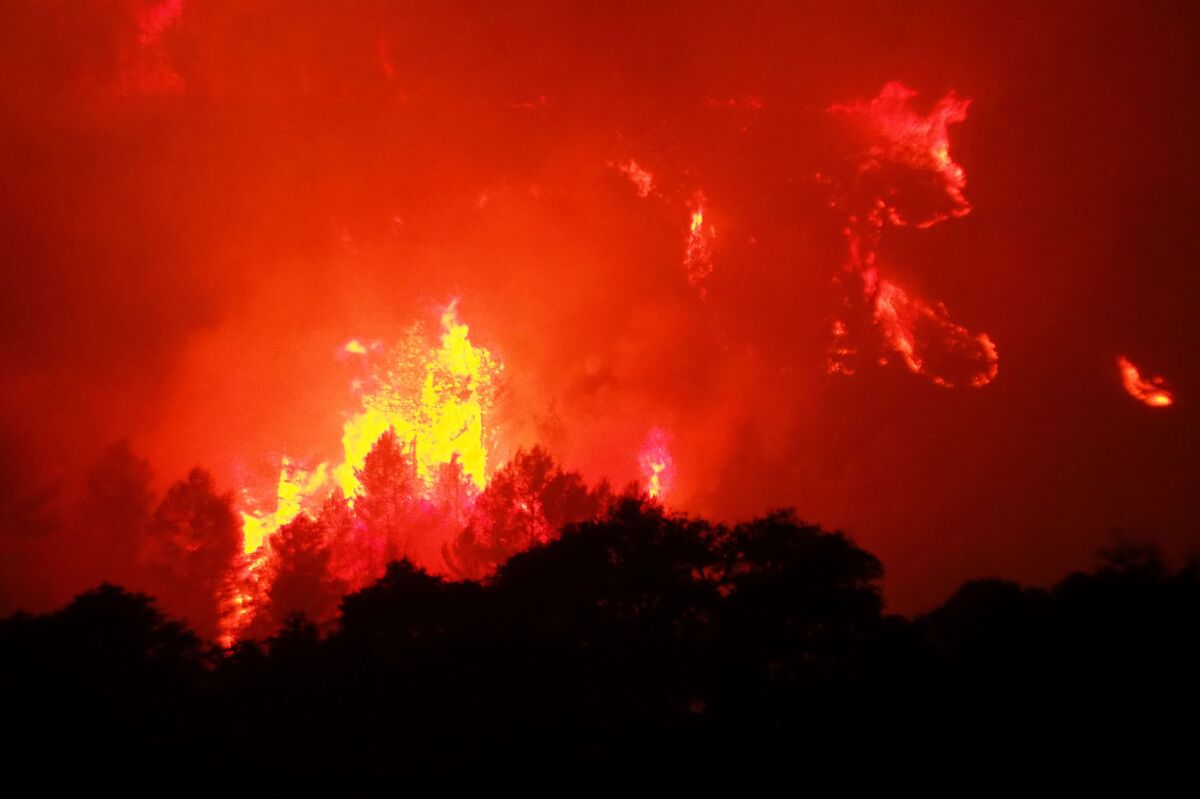 A fire near the village of Monze, in the Aude department of southern France, on Aug. 15. The fire, which broke out the day before following a drought, burned up more than 2,000 acres.

As fires increase in number and severity, fire services have realized they have to adapt. "We've mostly learnt the hard way," says Steve Gibson, a fire behavior analyst in the U.K. "Everyone usually thinks they've got fire addressed, until the fire comes that overwhelms their resources."

For Catalonia, this day came in 1998, when firefighters found themselves helpless to stop a massive blaze that burned through 60,000 acres in central Catalonia. The next year, the regional government founded the special forest fire unit to focus on prevention and tactics rather than pure suppression.

GRAF units are trained to use water but do not carry it; they fight fire with fire, as well as axes and chainsaws. As the Tarragona area fire raged in June, it threatened to cross into the nearby Serra de Montsant Natural Park, with its 45,000 acres of exposed trees. While other firefighting units fought the blaze on the flanks with water and planes, GRAF units moved to cut off its advance by burning and chopping trees along its path, creating a "black zone" across which the fire couldn't pass. The fire was contained.

GRAF takes preventive measures as well. On Sept. 27 it conducted a controlled or prescribed burn of a key area: a forest valley that in the past has served as a corridor for fire to spread between two mountains. A prescribed burn is "like a vaccination against a dangerous fire," says Marta Miralles, a forest engineer with the fire department who led the burn that day.

The goal is to eliminate low-growing bushes and sometimes tree understories without killing the tree or allowing the fire to get out of control. This requires certain know-how. Firefighters carried kerosene cans through the white pine forest, lighting the garrigue and wild rosemary that grow around the base of the trees. They were careful not to let the flames reach too high and threaten to burn the treetops. They stopped any one line of fire from getting too far ahead of the others.

In the scientific community, it's understood we need to get fire back on the landscape.

Mediterranean shepherds and farmers have been using fire to manage the landscape for thousands of years. But most techniques used by firefighters today were developed in the United States, where the record-setting blazes of the past 10 years have shown the limits of suppression alone. In the U.S. as well as Europe, the change in approach toward fire is just beginning.

"In the scientific community, it's understood we need to get fire back on the landscape," says Rod Linn, a climate modeler at Los Alamos National Laboratory in New Mexico. "And most fire practitioners have come to grips with fire having a lot of benefits. But with the public, there's work to do to get it socialized, to get people aware that just because you see smoke, it's not necessarily bad."

Many European experts agree. "Society gets scared about big fires, and they want to see planes," Castellnou says, "so the government provides the planes. But the planes will do nothing." 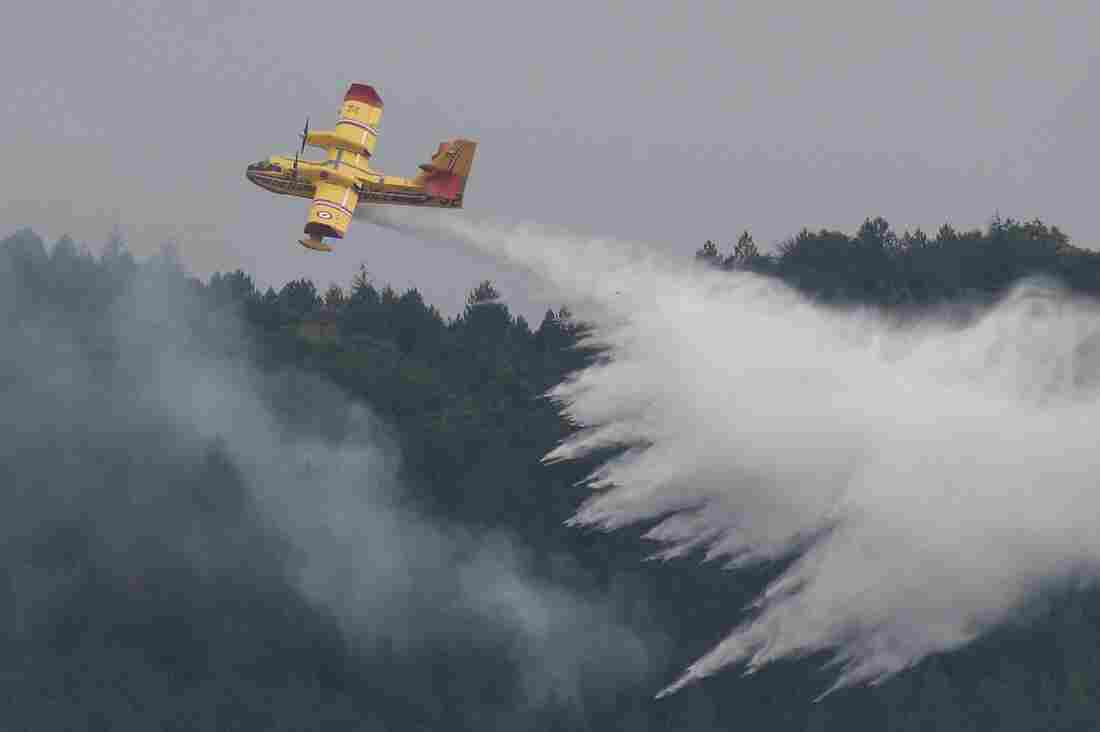 An airplane drops water to put out a forest fire near the village of Monze, southern France, on Aug. 15. Raymond Roig/AFP/Getty Images hide caption 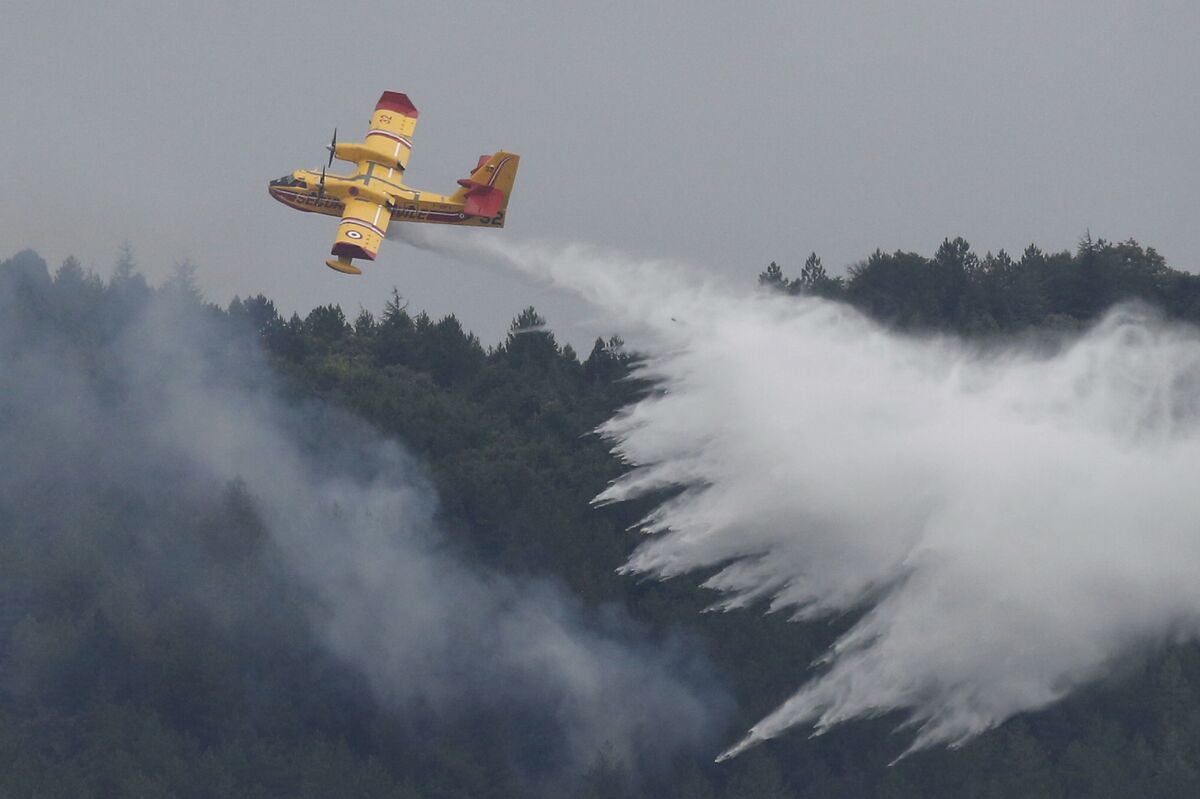 An airplane drops water to put out a forest fire near the village of Monze, southern France, on Aug. 15.

The fires in Tarragona in June destroyed dozens of homes and killed hundreds of livestock, but, Castellnou says, they were not an ecological disaster. The aftermath is not a charred wasteland. The fire often leaped from peak to peak, leaving areas in between untouched. Dead zones of blackened trees alternate with untouched forest and tiered orchards. The forest will recover, and the trees that grow back will likely be more adapted to the hotter, more arid conditions that now prevail in the region.

A megafire, like the ones in Portugal in 2017, is different. It burns with such heat that seed banks are destroyed and the landscape may be altered permanently. Wildlife — and trees — might not come back.

Fire services are learning to adapt to climate change and to work more with controlled burns. But to make the switch from pure fire suppression to what Castellnou calls "fire management" might be the work of a generation or more, say forest experts.

In the meantime, the forests of Europe are stocked with combustible material ready to ignite.

"For 20 years, we've been making progress," Castellnou says. "I think that we can get to a kind of equilibrium," between forests and fire. "But we will see more megafires. It's only a matter of time."