Accessibility links
Who Are Lev Parnas And Igor Fruman? The case of Lev Parnas and Igor Fruman blurs the line between impeachment and a criminal investigation — and unfolds like a mystery novel. The Giuliani associates face campaign finance charges. 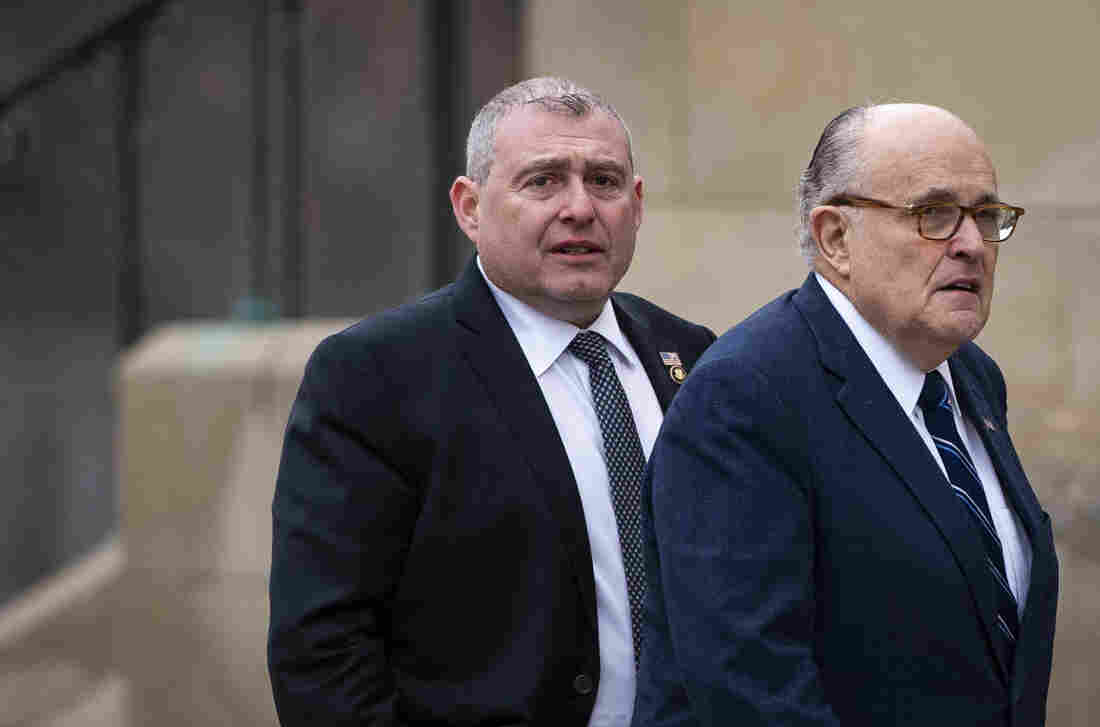 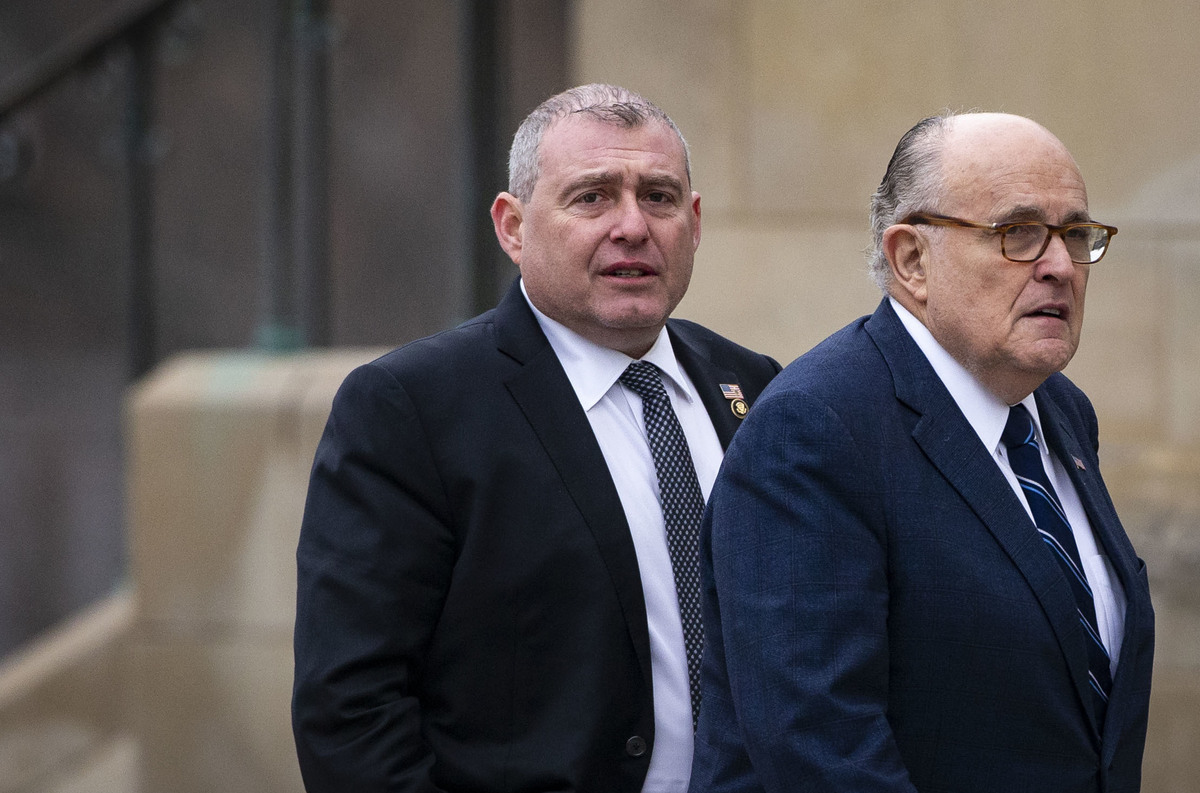 Lev Parnas (left) arrives with Rudy Giuliani, President Trump's personal lawyer, before a funeral service for former President George H.W. Bush on Dec. 5, 2018. Parnas and Igor Fruman, Soviet-born associates of Giuliani, are accused by U.S. prosecutors of skirting campaign contribution limits as part of a plot to oust the U.S. ambassador to Ukraine.

The story of Lev Parnas and Igor Fruman unfolds like a globe-trotting mystery over more than a year.

When the two associates of President Trump's personal lawyer, Rudy Giuliani, were arrested at an airport this month for campaign finance violations, it wasn't immediately clear how — or even if — those activities were related to the impeachment inquiry into Trump.

But even before their arrest by the FBI, the two Soviet-born men were among the people whom Congress wanted to interview.

That's because over the past couple of years, the businessmen crossed paths repeatedly with people and events at the center of the impeachment inquiry, both in the U.S. and in Ukraine.

Impeachment is a political process, not a criminal one. But the case of Parnas and Fruman blurs that line. How two unknown businessmen became embroiled with Giuliani and in the removal of the U.S. ambassador to Ukraine illustrates the complicated and shadowy web of connections and deal-making at the heart of the impeachment inquiry.

Parnas and Fruman are scheduled to be arraigned in a New York courtroom Wednesday on conspiracy and other charges related to campaign finance violations.

Company 'was a blank slate'

To better understand the extent of Fruman and Parnas' activities, it helps to follow the work of two unofficial investigators, on opposite sides of the world, who steadily scratched at clues and raised flags — neither of them able to see the full picture.

One sleuth — an expert on money and politics — was in Washington. The other was in Kyiv, with an eye on corruption in Ukraine.

The first investigator, Trevor Potter, has a D.C. pedigree. Potter is a Republican who used to run the Federal Election Commission and served as general counsel for John McCain's 2000 and 2008 presidential campaigns.

These days, Potter runs a group called the Campaign Legal Center. His team scans political contributions, looking for suspicious transactions that it reports to authorities.

In the summer of last year, they found one.

When Potter and his team started digging into the company that made the contribution, they found that "it was a blank slate."

"The company hadn't existed. It had been formed literally a couple weeks before the contribution," Potter recalls. "It had no website, no history of political activity, so you're thinking this is most likely a company created to make this contribution."

And that — setting up a shell company to hide a political contribution — is illegal.

"You have to disclose on the FEC reports the true source of the money, who the contributor actually is," Potter explains.

Lev Parnas (left) and Igor Fruman are shown after their arrest on Oct. 9 at Dulles International Airport, outside Washington, D.C.

Potter and his team wanted to know who was behind the company. So they kept digging and found addresses associated with Global Energy Producers — in South Florida and New York.

"So you take a look at the address and say, 'Has anyone else given from it?' " Potter says.

That's how they found contributions to Pete Sessions of Texas, who was a Republican congressman at the time but lost his reelection bid last year.

The donors were Lev Parnas and Igor Fruman.

In July 2018, Potter's group alerted the FEC about possible campaign violations by Parnas and Fruman.

'A serious problem with our form of governance'

Months later, on the other side of the globe, a second sleuth heard the same names: Lev Parnas and Igor Fruman.

Dale Perry doesn't know anything about campaign finance. But he does know about corruption, as well as the energy industry in Ukraine. He owns a large U.S. energy company operating in Ukraine.

Perry first heard of Parnas and Fruman after they met with Perry's former business partner in March of this year and presented an unusual plan.

"What was so troubling was, it was basically the presentation of the intent to take the gas sector back to where it was during the Yanukovych regime," Perry says, referring to former Ukrainian President Viktor Yanukovych.

A place that was, Perry says, "a heck of a lot more corrupt."

"I had never seen anybody in any part of the world where I've worked — and I've worked in some 30 different countries — I've never seen a businessperson claim that they could see an ambassador removed," Perry says.

The effort to remove Yovanovitch is key to Congress' impeachment inquiry. Trump called Yovanovitch "bad news." She had a history of fighting corruption in Ukraine.

In Ukraine, Perry put all his concerns into a memo and sent it to a contact at the U.S. Embassy.

"At times when I was putting this together, I felt like I was paranoid and going a little bit — I don't want to say a little bit crazy, but maybe I would say it that way," says Perry.

After all, Parnas and Fruman were not well-known players in business or political circles in Ukraine or the United States. Financial documents show that Parnas was dogged by financial debts and court judgments against him. In one instance, he owed a couple in South Florida $500,000 for a film that never got made.

People who know the men say Fruman, who was born in Belarus when it was part of the Soviet Union, doesn't speak great English. Parnas was also born overseas — in Ukraine during the Soviet era — though both men are U.S. citizens.

"When two or three or four businesspeople can go out and see to it that a U.S. ambassador is removed from her post when she's doing a fabulous, fantastic, excellent job, there is a serious problem with our form of governance," Perry says.

John Dowd, who was formerly a personal attorney for Trump, is representing Parnas and Fruman. He declined to speak with NPR for this story.

In his own words

Instead, one of the men at the center of the indictment — Parnas — spoke for himself during an interview with NPR reporter Jeff Brady last month, before Parnas and Fruman were arrested at Dulles International Airport on Oct. 9.

Parnas talked about the political contributions made by Global Energy Producers, the shell company that had set off alarm bells in Washington.

"You know, this is actually the first couple of times that I really started doing some bigger donations, because I wanted to get notoriety for my energy company and I felt it might be a great way to play with the big boys, as you call it," he told NPR.

Parnas calls Global Energy Producers an energy company, but it had no visible business, financing or connections to the energy industry.

It did, however, have a well-connected ally.

"Mayor Giuliani is a very dear friend of mine, yes," Parnas said.

Parnas often met with Giuliani at the Trump International Hotel in Washington, D.C., and they ate together at the hotel's upscale steakhouse.

He and Giuliani had more than just social connections. Parnas says there were financial ties too.

"We actually met with the mayor on a business transaction about a company that I own back in the days. And the business didn't work out. But we just became good friends and started spending a lot of time together," Parnas said.

That company was named Fraud Guarantee.

Giuliani told Reuters that Fraud Guarantee paid him half a million dollars for consulting and legal advice. And Parnas says he and Giuliani also worked closely in Ukraine.

Giuliani's actions in Ukraine are another key part of the impeachment inquiry.

"I just happen to be Ukrainian. I happen to speak the language. I happen to also have a lot of resources in that part of the world," Parnas said in his interview with NPR.

Parnas helped arrange and sat in on meetings between Giuliani and several prominent Ukrainians who promised dirt on Democratic opponents and have since come up in the impeachment inquiry. But Parnas told NPR that he wasn't going to comment on what was discussed in those meetings.

In the end, the team of Giuliani, Parnas and Fruman realized at least part of what they set out to do: In May, the Trump administration pulled Ambassador Marie Yovanovitch out of the U.S. Embassy in Kyiv.

In Ukraine, anti-corruption groups that worked closely with the U.S. were shocked.

"The United States for many years was our key ally and key partner, kind of covering our backs," she says. "But now we are at the situation when the Ukrainian oligarchs and kleptocrats and some corrupt officials are getting support from the senior-level officials in the United States."

"There are people inside American institutions which are fighting for democracy," she says.

To her, those people include the whistleblower who kicked off the impeachment inquiry — and the people who brought Parnas and Fruman's activities to light.

From 'garden-variety' complaint to the White House

The investigations by Potter and Perry culminated in the arrests at Dulles, where Fruman and Parnas had one-way tickets out of the United States.

The indictment fills in some of the gaps in the puzzle that the amateur sleuths put together. For example, it says that after Fruman and Parnas made the contribution to Texas Republican Rep. Pete Sessions, they lobbied him to help get rid of Ambassador Yovanovitch.

After that meeting, Sessions wrote a letter to the State Department about Yovanovitch that said the ambassador expressed "disdain" for the Trump administration. Sessions says Parnas and Fruman were not his reason for writing the letter.

The indictment also alleges that Parnas and Fruman funneled money from an unnamed Russian to other American politicians and candidates — which means this is also a story about foreign influence in U.S. elections.

For the Campaign Legal Center's Trevor Potter, who'd heard nothing since he had first filed a complaint about Fruman and Parnas more than a year ago, the arrests were a shock.

"To go from what ... was a garden-variety FEC violation in a string of complaints we have filed to suddenly discovering that they were completely wrapped up in the White House actions, the Giuliani actions, what was happening in Ukraine and letters from members of Congress on the firing of the ambassador, is simply a very different scale than we had understood up until then in our work," he says.

There are still many unknowns in the case, such as the identity of the Russian who allegedly provided money for the campaign donations and how much Giuliani or Trump knew about what Fruman and Parnas were doing.

There are photographs showing the defendants with members of the Trump family, including the president. Trump insists that he doesn't know Fruman and Parnas and that he has been photographed with lots of people.

At a more basic level, where does Potter think Parnas and Fruman fit into the larger web of the impeachment inquiry? Are they masterminds or bumbling executors of someone else's orders?

"That is the question, I think, because we don't know a lot about them," says Potter. "They weren't politically active until last year. So what is it that turned them on? And where did they get all this money? The question of who is behind all this, who is using whom, is, I think, still to be revealed but — I would expect — will be revealed."