Accessibility links
Mark Zuckerberg Offers A Choice: The Facebook Way Or The China Way At a congressional hearing, the CEO acknowledged he is not "the ideal messenger" for Facebook's digital currency plan, but said innovation is essential to American financial leadership. 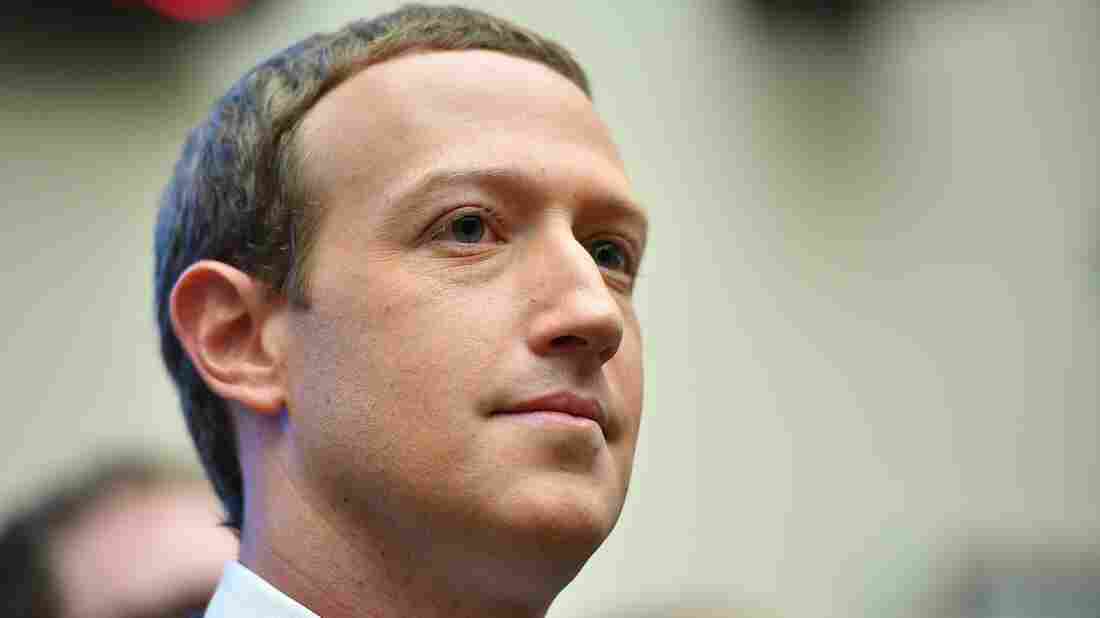 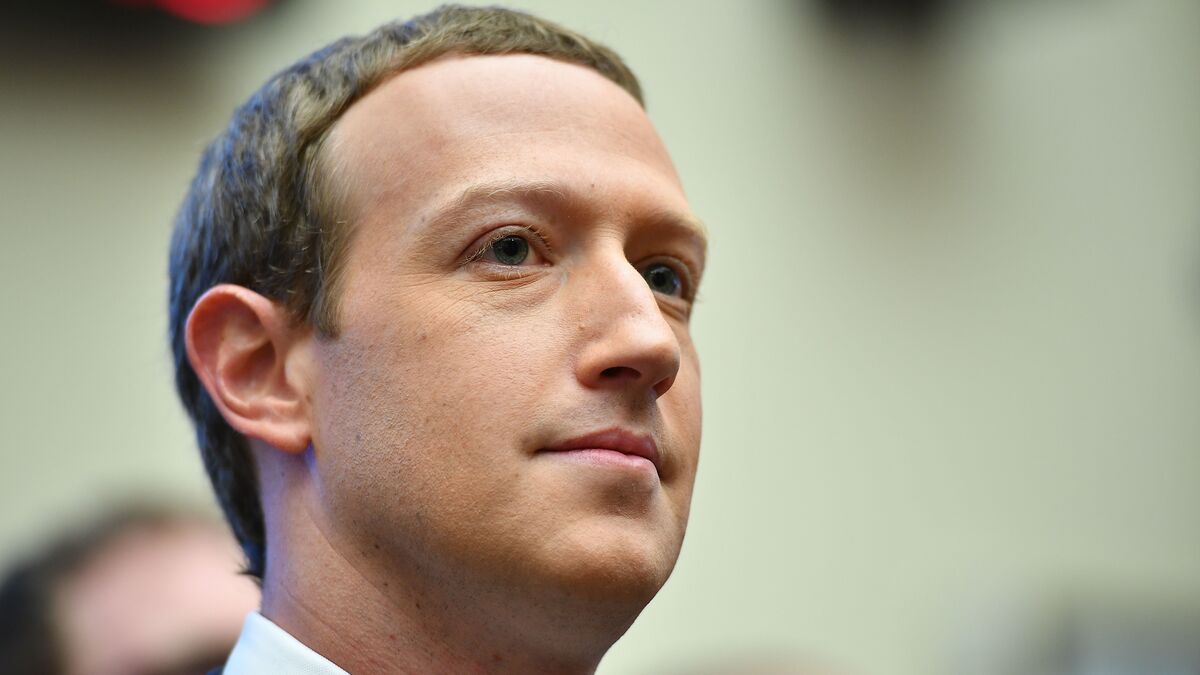 Facebook CEO Mark Zuckerberg appears before the House Financial Services Committee on Wednesday. He faces questions about the company's influence.

Facing increased questions over whether Facebook can be trusted to protect its users, CEO Mark Zuckerberg told lawmakers Wednesday that the company will pull out of its controversial digital currency project if U.S. regulators don't approve it.

Zuckerberg said the social network would leave the nonprofit body governing the new currency, Libra, if other members decided to go ahead without regulatory approval.

However, Zuckerberg defended the merits of the project at a contentious Capitol Hill hearing that ranged across a broad range of issues facing the world's largest social network.

Much of the criticism of Facebook centers on whether the company is trustworthy, given problems with privacy, hate speech, disinformation, and other threats that have grown along with the scope of its products and user base.

"Do you understand why this record makes us concerned with Facebook entering the cryptocurrency space? Do you realize that you and Facebook have a credibility issue here?" asked Rep. Nydia Velázquez, D-N.Y.

Rep. Maxine Waters, the chairwoman of the House Financial Services Committee, which is holding hearing, told Zuckerberg: "Perhaps you believe you are above the law, and it appears that you are aggressively increasing the size of your company, and are willing to step over anyone, including your competitors, women, people of color, your own users, and even our democracy to get what you want."

The California Democrat repeated her call for Facebook to stop working on Libra until it fixes its other problems, from election interference on its platform to its policies about political speech.

But Zuckerberg says it's Facebook's way — or China's way.

He told lawmakers that Libra is essential to projecting American financial leadership around the world.

He warned that any delay risks losing that leadership to China.

"China is moving quickly to launch a similar idea in the coming months," Zuckerberg said. "We can't sit here and assume that because America is today the leader that it will always get to be the leader if we don't innovate."

He frequently invokes China as a rival to American technology supremacy, and American values.

Committee members seized the opportunity of Wednesday's hearing to grill the Facebook founder about a whole host of topics.

Here are five questions raised in the hearing room.

Thee future of Libra has been thrown into doubt in recent weeks as several of the project's initial partners backed away, including the credit card companies Visa and MasterCard and the digital payment firms PayPal and Stripe.

Asked why the partners had dropped out, Zuckerberg gave a blunt response: "Because it's a risky project and there's been a lot of scrutiny."

Regulators around the world have taken a dim view of the project, sounding fears that it could pose a threat to financial stability and be used to fund terrorism and other illegal activities.

Facebook says Libra would let users around the world — especially those without traditional bank accounts — send money as easily as sending a text message.

Zuckerberg said he was still in favor of the project. But he acknowledged the criticism of Libra and Facebook's role. "I'm not the ideal messenger right now. We've faced a lot of issues over the past few years, and I'm sure people wish it were anyone but Facebook helping to propose this."

Has Facebook done enough to stop discrimination in advertising?

Housing was the other headline subject of Wednesday's hearing. Facebook has been hit with a federal lawsuit by the Department of Housing and Urban Development for allegedly enabling housing discrimination.

The allegations stem from Facebook's ad targeting tools. The company lets advertisers select who can and cannot see ads, based on a range of different categories.

"Facebook is discriminating against people based upon who they are and where they live," in violation of the Fair Housing Act, HUD Secretary Ben Carson said when the suit was filed in March.

The company has also been accused of allowing age and gender discrimination in job ads.

Facebook has stopped letting advertisers target ads for housing, jobs and credit to people based on their ethnic group, gender, age or zip code.

On Tuesday it pledged $1 billion toward affordable housing in California.

Zuckerberg told the committee that "people shouldn't be discriminated against on any of our services."

Nicol Turner Lee, a fellow at the Brookings Institution's Center for Technology Innovation who studies access to technology, said Facebook may not have intended its advertising tools to be used this way.

But she said Internet platforms need to take more care to consider the consequences of the technologies they build.

"We have to ask ourselves, are companies like Facebook clear about the guardrails that are protecting human and civil rights, and the extent to which they're building products and services that comply with those laws?" she said.

Critics are furious about the social network's policy of allowing politicians to publish misleading or downright untrue posts and ads on its platform.

"How does this new policy benefit you?" Waters asked Zuckerberg. "It seems that a policy that allows politicians to lie, mislead and deceive would allow Facebook to sell more ads, thus making the company more money."

Facebook says its policy flows from its commitment to free speech. It says it does not want to judge whether political speech is true or not, and that users should be free to hear from politicians and make up their own minds.

But that has not satisfied critics.

"The impact of this will be a massive voter suppression effort that will move at the speed of a click," Waters said. "Your claim to promote free speech does not ring true."

Democratic presidential candidate Sen. Elizabeth Warren of Massachusetts ran her own deliberately false Facebook ad to protest the policy. In it, she incorrectly claimed Facebook and Zuckerberg had endorsed President Trump.

Zuckerberg said he had considered dropping political advertising altogether — noting that it contributes just a tiny fraction of Facebook's billions of dollars in annual sales. But he argued that could have the effect of favoring incumbents and candidates favored by the media.

What is Facebook doing to prevent the 2020 election from being a repeat of 2016?

With U.S. intelligence agencies warning that foreign governments may try to influence American politics leading up to next year's election, lawmakers want to know how Facebook is defending its platform from manipulation.

"Facebook has been found at the scene of the crime" when it comes to false information spreading in many places around the world, said Rep. Gregory Meeks, D-N.Y.

Zuckerberg gave an update about Facebook's election security efforts on Monday. That included a number of new features and updates to existing policies to provide more transparency about who is posting on Facebook.

For example, the site will now be labeling content from media outlets it considers to be "state-controlled," which Facebook defines as "wholly or partially under the editorial control of their government.''

But the scope of the problem Facebook must confront was also highlighted on Monday when the company said it had taken down four more networks of fake accounts. Facebook said it has removed more than 50 such networks, which could attempt to manipulate its users, in the past year.

Three of the newly disabled networks were tied to Iran, while the fourth originated in Russia and showed some links to the Internet Research Agency, the Kremlin-backed troll farm involved in political interference in 2016, Facebook said.

Zuckerberg told reporters on Monday that election security "is one of my top priorities for the company" and that Facebook is no longer "on our back foot" when it comes to identifying fake accounts.

Congress is not the only branch of government asking tough questions about Facebook. The Federal Trade Commission, the Department of Justice and a group of 47 state attorneys general are all investigating Facebook for potential antitrust violations.

"You have opened up a serious discussion about whether Facebook should be broken up," Waters told Zuckerberg on Wednesday.

The state prosecutors are "concerned that Facebook may have put consumer data at risk, reduced the quality of consumers' choices, and increased the price of advertising," New York Attorney General Letitia James said Tuesday.

Some critics are calling for the company to be broken up, or for its acquisitions of Instagram and WhatsApp to be unwound. Warren has made the breakup of Facebook — along with Google and Amazon — a key part of her campaign platform.

Some tech veterans agree. Marc Benioff, the CEO of software company Salesforce, told CNN that Facebook is "addictive" and has too much control of users' data — and therefore should be broken up. "They're having an undue influence as the largest social media platform on the planet," he said.

And even a Facebook co-founder has turned on the company. Chris Hughes, who was one of Zuckerberg's roommates at Harvard, launched a $10 million anti-monopoly fund to support policy, academic research and organizing to take on corporate power in tech and other industries.

Zuckerberg bristles at the idea of breaking up his company. In leaked audio from staff meetings this summer, obtained by the website The Verge, the CEO said Facebook would "fight" any effort to do so and expected to win any legal challenge.