Accessibility links
'Janis' Is A Definitive Portrait Of One Of Pop Culture's Most Misunderstood Martyrs Holly George-Warren's research, eye for detail, illuminating contextualization and clear delivery make for a far more rounded and convincing image of the musician's precocity than seen previously.

In 'Janis,' Joplin Shown To Be A Tangle Of Talents, Contradictions And Mythology

In 'Janis,' Joplin Shown To Be A Tangle Of Talents, Contradictions And Mythology 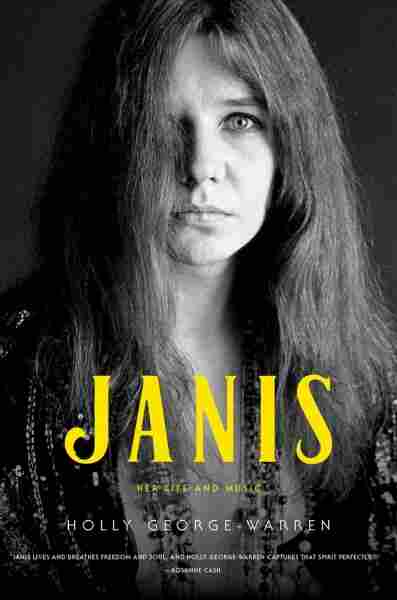 Her Life and Music

In 1969, Newsweek bestowed this honorific on Janis Joplin: "The first female superstar of rock music."

It's also a claim that Holly George-Warren sets out to prove in Janis, her new biography of the iconic Texan singer who rocketed to fame after becoming the frontwoman of the San Francisco blues-rock group Big Brother and the Holding Company — only to die four years later at the age of 27, a casualty of the freewheeling '60s, the decade she came to embody.

Joplin was born in 1943 in Port Arthur, Texas, where she would spend much of her brief life. As a child, her tomboy brusqueness and outspoken charm complemented her complexity of mind and spirit; Port Arthur was a segregated "cultural backwater," according to George-Warren, that only served to heighten Joplin's independence and curiosity. After falling under the sway of blues and rock music as a teenager, she leapt eagerly into the beatnik scene. Beat author Jack Kerouac's On the Road floored her in 1957, and its exploration of freedom and countercultural notions set her soul ablaze. From there, sex and drugs became staples of her life, a progression that often feels formulaic in accounts of Boomer coming-of-age. But George-Warren's deep research, eye for detail, illuminating contextualization, and clarity of delivery all make for a far more rounded and convincing image of Joplin's precocity in the heady decades of post-World War II America.

But it was Joplin's pilgrimage to San Francisco in 1966 to join the up-and-coming psychedelic band Big Brother and the Holding Company that catapulted her to the pop-culture pantheon. Her gritty, gutsy, godlike voice didn't mesh well with the group at first; they had to bend their more progressive tendencies in order to accommodate their new singer's far more direct and impactful sound. Big Brother's searing appearance at the Monterey Pop Festival in the summer of 1967 cemented her stardom, and their hit single "Piece of My Heart," an Erma Franklin cover, from their best-selling 1968 album Cheap Thrills became an anthem for hippies and feminists everywhere.

George-Warren traces this rise meticulously, citing contemporaneous interviews as well as fresh sources in order to paint Joplin's ascendance far more fully than has ever been accomplished before. And her riotous anecdotes splash color on the canvas, from the time Joplin started a massive bar-brawl thanks to her sensuous dancing one night in Austin to the snapshot of her getting into a fistfight with one of her heroes, Jerry Lee Lewis.

George-Warren's prior work includes biographies of other troubled rockers with cult followings, most recently Big Star's Alex Chilton in her book A Man Called Destruction. Her knack for capturing conflicted subjects is uncanny; in Janis, she digs into Joplin's layered emotions, fluid sexuality, unshakably low self-esteem, and unquenchable urge to transcend her racist, restricted Port Arthur upbringing. Joplin left Big Brother in early 1969 to strike out on her own, and her solo career accelerated everything in her life, good and bad, toward a terminal velocity.

Janis captivatingly tells the story of her two solo albums, 1969's I Got Dem Ol' Kozmic Blues Again Mama! and 1971's posthumous Pearl, as well as the latter's chart-topping hit "Me and Bobby McGee," rendering the backdrop and behind-the-scenes genesis of these recordings with crystalline insight. Joplin's death on Oct. 4, 1970, of an accidental heroin overdose seems like a tragic inevitability, the byproduct of a life spent leaning into the boundaries of expression and art. At Janis's heart is Joplin's voice — a ragged, sensitive, elemental howl that the singer herself explained by saying, "I just opened my mouth and that's what I sounded like."

"Domestic earth mother" versus "tough biker chick": By book's end, George-Warren has boiled down Joplin's complicated psyche into this simple, vivid dichotomy. But the author is far from reductive as she does so. In encapsulating Joplin's dual nature so concisely, George-Warren delivers the definitive portrait of one of pop culture's most misunderstood martyrs. Joplin was both a product and an architect of her times; in dwelling so sympathetically on her tangle of talents, contradictions, and mythology, Janis brings one of rock's most enduring legends down to earth while holding her justly up to the light.