Accessibility links
How To Help A Child With Anxiety : Life Kit When a child is scared of the dark or being left alone, it can be hard for adults to know the difference between an age-appropriate fear and full-blown anxiety. This episode is full of tools to help parents better understand and manage their child's "worry brain." 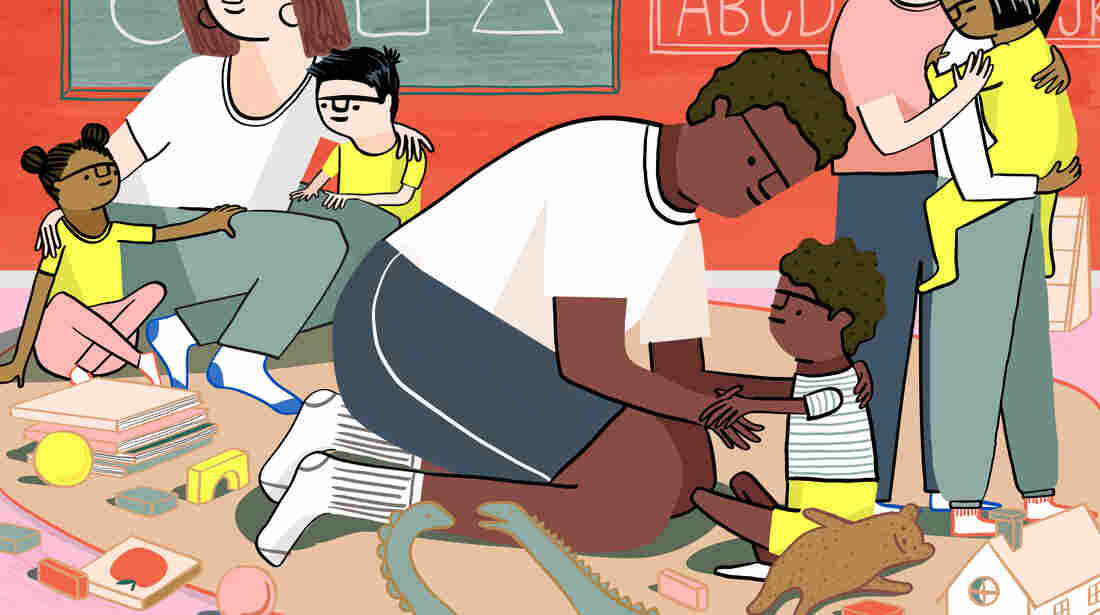 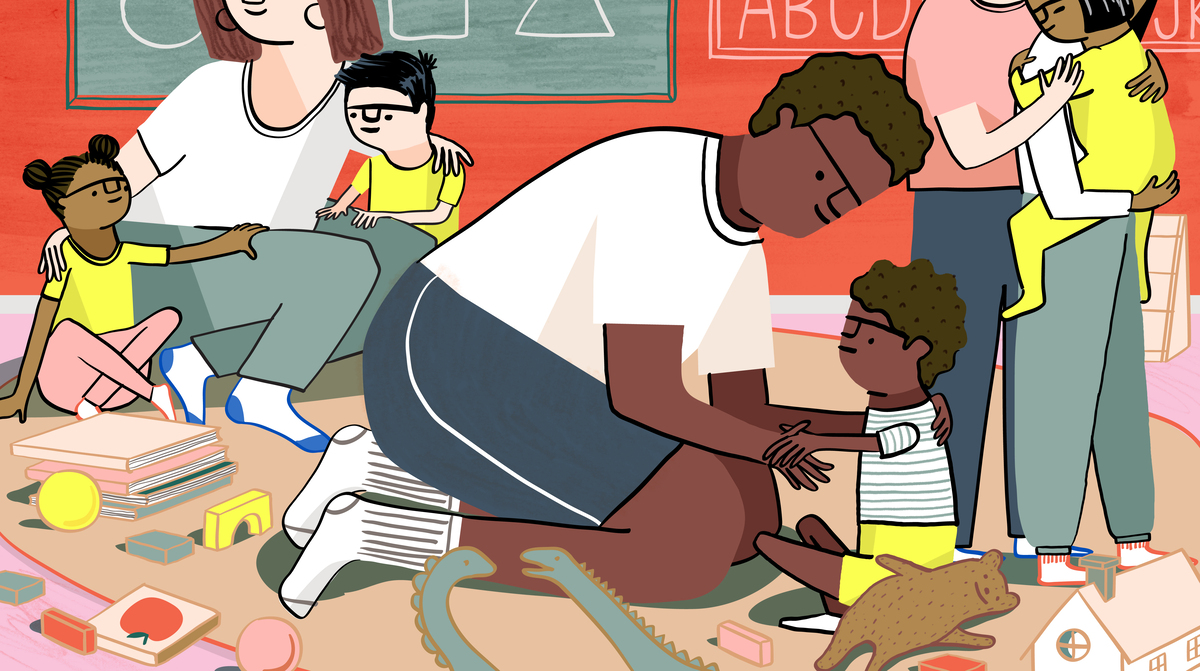 This story is adapted from an episode of Life Kit, NPR's podcast with tools to help you get it together. To listen to this episode, play the audio at the top of the page or subscribe here. For more, sign up for the newsletter and follow @NPRLifeKit on Twitter.

Childhood anxiety is one of the most important mental health challenges of our time. One in five children will experience some kind of clinical-level anxiety by the time they reach adolescence, according to Danny Pine, a child and adolescent psychiatrist at the National Institute of Mental Health and one of the world's top anxiety researchers. Pine says that for most kids, these feelings of worry won't last, but for some, they will — especially if those children don't get help.

Here are six takeaways that all parents, caregivers and teachers can add to their anxiety toolkits, including information on how anxiety works, how parents can spot it and how to know when it's time to get professional help.

1. Anxiety is a fear of the future and all its unpredictability.

"The main thing to know about anxiety is that it involves some level of perception about danger," says Pine, and it thrives on unpredictability. The mind of an anxious child is often on the lookout for some future threat, locked in a state of exhausting vigilance.

We all have some of this hard-wired worry, because we need it. Pine says it's one of the reasons we humans have managed to survive as long as we have. "Young children are naturally afraid of strangers. That's an adaptive thing. They're afraid of separation."

Full-blown anxiety happens when these common fears get amplified — as if someone turned up the volume — and they last longer than they're supposed to. Pine says separation anxiety is quite common at age 3, 4 or 5, but it can be a sign of anxiety if it strikes at age 8 or 9. According to research, 11 is the median age for the onset of all anxiety disorders.

A bundle of factors contributes to a child's likelihood of developing anxiety. Roughly a third to half of the risk is genetic. But environmental factors also play a big part. Exposure to stress, including discord at home, poverty and neighborhood violence, can all lead to anxiety. Research has shown that women are much more likely than men to be diagnosed with an anxiety disorder over their lifetime and that anxiety, as common as it is, appears to be vastly underdiagnosed and undertreated.

That's why it's important for parents, caregivers and teachers to spot it early. Be on the lookout for how long anxious feelings last. A few weeks, Pine says, usually isn't a cause for concern. "It's really when it goes into the one- to two-month range — that's where parents should really start ... worrying about it."

Here's another red flag: "Are there things that the child really wants to do or needs to be doing, and they can't do those things?" asks Krystal Lewis, a colleague of Pine's and a clinical researcher at the National Institute of Mental Health who provides therapy to anxious children. "If you feel you're hitting a wall in terms of trying to get the child to do those things, that might be another indicator that potentially, you know, we should get some help."

2. Be on the lookout for the physical signs of anxiety.

The worried feelings that come with anxiety can seem hidden to everyone but the child trapped in the turbulence. That's why it's especially important for grown-ups to pay close attention to a child's behavior and to look for the telltale signs of anxiety in children.

Anna, of Brampton, England, remembers when her 7-year-old son started having trouble at school. (We aren't using parents' full names to protect their children's privacy.)

A stomachache, headache or vomiting can all signal anxious feelings, especially as a child gets closer to the source of the anxiety.

"You'll see that they'll have a rapid heartbeat. They'll get clammy, you know, because their heart is racing," says Rosemarie Truglio, the head of curriculum and content at Sesame Workshop. "They'll become tearful. That's another sign. ... Anxiety is about what's going to be happening in the future. So there's a lot of spinning in their head, which they're not able to articulate."

It's near this point of panic that Pine says a child's anxiety is most visible: "So you can see it in their face. There is a certain way the eyes might look. You can see it in behavior in general. People tend to either freeze, be inhibited not to do things when they're anxious, or they can get quite upset. They can pace. They might run away."

Rachel, of Belgrade, Mont., says her 6-year-old son really doesn't want to swim or go to their local splash park.

"He just says there's too many kids in there. And he cries, and I've tried to go early in the morning when there's no one there. I mean, I've lost count of how many times we've driven by just to see if I could get him out of the car and he won't. And I'm not going to drag him."

We heard this from so many parents: My child is terrified to do something that I know won't hurt them, that they might actually enjoy. What do I do?

3. Before you try to reason with a panicked child, help the child relax.

"You're not going to be able to move forward until you get them to calm down," says Sesame's Truglio. "Because if you can't calm them down, you can't even reach them. They're not listening to your words because they can't. Their body is taking over, so talking and shouting and saying, 'You're going to do this!' is not very helpful."

How do you break through this kind of panic? We recommend the Swiss Army knife in the mental health toolkit: deep belly breathing. Take a look:

Now that you've managed to calm down your child, it's time to ...

We heard from lots of parents who say they really struggle to know how to respond when their kids worry about unlikely things — especially if the fear is getting in the way of a busy daily routine, maybe a fun family outing or sleep.

Amber's filtered response was exactly right, says Truglio. Never dismiss a child's worries, no matter how irrational they may seem. A parent's priority, she says, should be "validating your child's feelings and not saying, 'Oh, you know, buck up. You can do this!' That's not helpful."

Lewis, of the National Institute of Mental Health, has language for parents who in the moment may feel frustrated by a child's behavior:

" 'I know that you're feeling uncomfortable right now. I know these are scary feelings.' You want to personify the anxiety, and so you can almost say, 'You know what, we know that this is our worry brain.' "

Lewis says it's crucial that children feel heard and respected. Even if you're pretty certain aliens aren't going to take over the planet tomorrow, if your child is worried about it, you need to let your child know that you respect that fear.

5. Help your child face their fears.

This is the fine line every parent, caregiver and teacher must walk with a child struggling with anxiety. You must respect the child's fear, but that does not mean giving in to the fear.

"I think our initial reaction when we see an anxious child is to help them and protect them and not to push them or encourage them to do the things that they're afraid of," Pine says. But, he adds, one of the things researchers have learned from years of studying anxiety in children is "how important it is to face your fears."

This might be hard for some parents to hear, but we heard it from every expert we interviewed. As to why it's important to face your fears, Lewis says, "the more that you avoid or don't do certain things, it's almost implicitly teaching the child that there is a reason to be anxious or afraid if we're not doing the things that are difficult. It's sending this message that, 'Oh well, there is potentially a dangerous component to this.' "

So it's important, Lewis says, "that children understand that things are gonna be difficult in life. Things can be scary. We can do them. ... I tell some of my patients, 'You can feel scared. That's OK. We're gonna do it anyway.' "

And Truglio agrees. While we do have to validate our kids' feeling of fearfulness, she says, "we can't always give in to this feeling. ... You need to push them a little bit. And there's this fine line: You can't push so far, because that's going to break them, right? They're going to fall apart even more."

How do we grown-ups find that fine line?

6. Build confidence with a baby-step plan.

Helping kids come up with a plan to face their fears is Lewis' job. It's called cognitive behavioral therapy, and a big part of that is exposure therapy.

Lewis says she once worked with an 8-year-old who was terrified of vomiting.

"We did a lot of practice, which included buying vomit spray off Amazon and vomit-flavored jelly beans," she recalls. "We listened to all types of fun vomit sounds using YouTube video. We did a lot of practicing up to the point where we created fake vomit, and we were in the bathroom and just pretending to vomit."

And Lewis says that baby step after baby step, the girl made important progress.

Lewis says parents can use rewards to celebrate their kids when they make progress — think small but meaningful rewards like letting your child pick dinner that night or the movie for family movie night.

Obviously, these takeaways are just a starting point for concerned families. For more helpful takeaways about how to identify and manage childhood anxiety, Pine and Lewis recommend a handful of books:

If you feel overwhelmed by your child's anxiety, don't hesitate to ask for professional help — again, from your family's pediatrician or from a cognitive behavioral therapist. Because the good news is that anxiety is not only incredibly common but also treatable.