Accessibility links
Review: Israeli Finds Himself Naked And Abroad In 'Synonyms' Yoav (Tom Mercier) finds himself without clothes soon after arriving in Paris, and strives to assimilate into French culture.

An Israeli Stranded In Paris, Aching To Blend In: 'Synonyms'

An Israeli Stranded In Paris, Aching To Blend In: 'Synonyms' 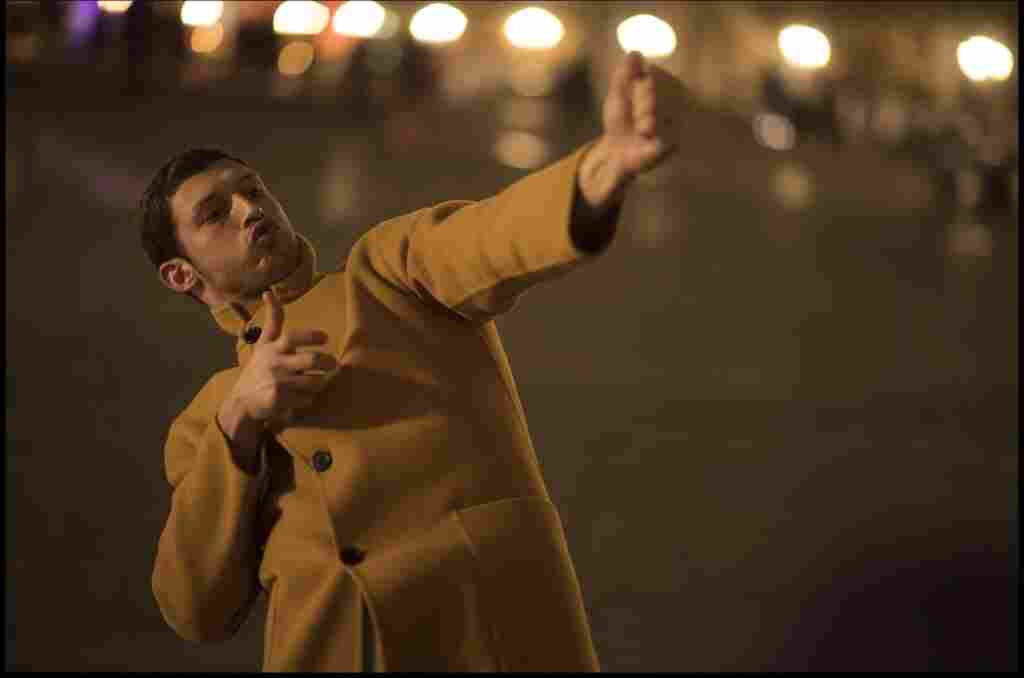 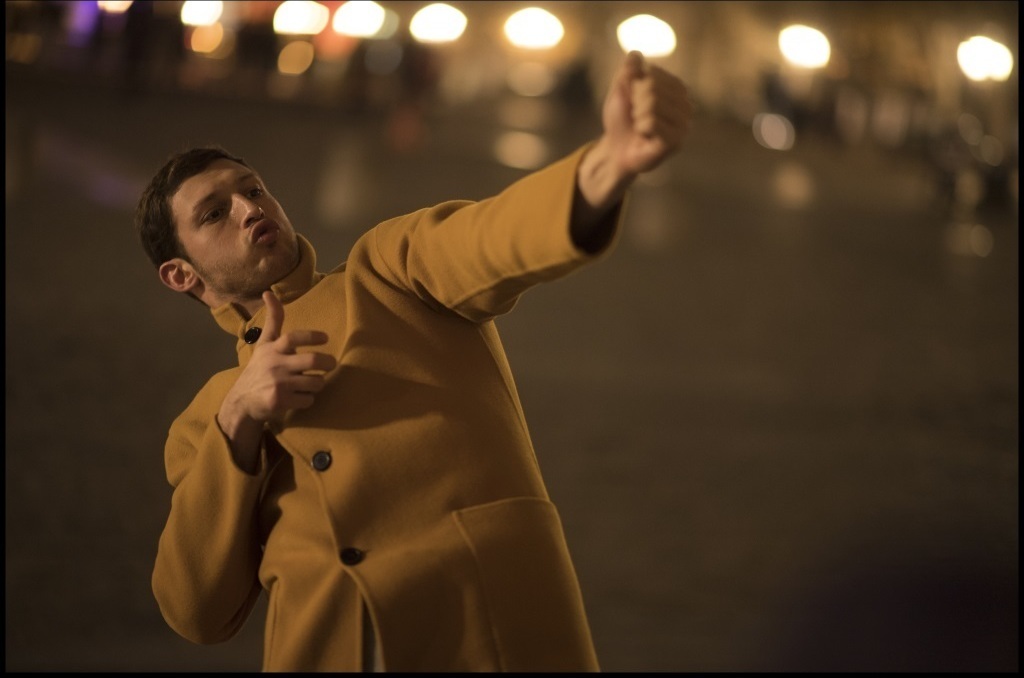 It's not long into Synonyms before Yoav (Tom Mercier), a young Israeli in Paris, get caught with his pants down. After leaving his apartment's front door ajar while bathing, he finds his clothes stolen. He bangs on his neighbors' doors for help, hollering when they don't respond, and slips back to his bathtub, shivering in the cold. Not a great start for a self-imposed exile, but a wonderful start for the movie that unfolds.

His neighbors, Emile (Quentin Dolmaire) and Caroline (Louise Chevillotte), soon discover him. Showing more curiosity than concern, they bring him to their apartment, warm him, clothe him, and send him on his way with seemingly as many belongings as he had when he arrived: enough to get by. Emile and Caroline become his closest friends, his guides through his newly adopted city. They ask him what he'll do in Paris. "I don't know," he responds. "I'll be French."

He spends his days walking through the city, enveloped in a golden coat that seems both comfortable and too thin for the weather, repeating French words he learns in a dictionary. Testing himself on the synonyms. Those synonyms are the key here: My elementary French would limit me to the basics — one word per meaning, if any. But synonyms help you become equal to the native speakers.

Yoav, who swears off speaking Hebrew, faces obstacles. His heritage tinges his French with an Israeli accent, and he only finds work at the Israeli embassy, in security.

Which is almost exactly where Yoav hoped he wouldn't end up. He feels ashamed of Israel's military culture, its suffocating masculinity. It's why he up and left for Parisian life, and why he forbids himself to speak Hebrew. In the security job, he's caught up in the same world. He introduces a friend, Yaron (Uria Hayik), to another man, Michel (Olivier Loustau), and the two immediately begin wrestling, a violent job interview. Earlier, Yaron starts humming the Hatikvah, the Israeli national anthem, on the train. His humming becomes more and more aggressive, as he flits around the car, getting in fellow passengers' faces, staring them down. For Yaron, Europe represents a hornets' nest for Jews; everywhere, he sees anti-Semitic attacks or their looming threat, with the Israeli embassy a haven. Yoav sees Paris differently, a refuge in itself.

Synonyms is a story not of nations but of the people that travel through them. Its ambitions are decidedly large, but the events it depicts rather mundane. Director Nadav Lapid drew on his own experiences in making the film, and the results feel immensely personal. Small details — Yaron's cheap nightly meal of pasta and crushed tomatoes in a barren apartment, having to sneak food from a club, the blunt liberalism of the French citizenship class — create a compelling portrait of modern immigration.

That's at least in part because Mercier plays Yoav with a fierce intensity. He's persuasive as a stranger, a grimace plastered on his face as he weaves through crowds on the street. His eyes feel lost. The film's pedestrian, frenetic cinematography matches his energy; following Yoav through the city feels violent. Mercier is a great avatar for Lapid, who has created a film that bubbles with anger. The movie has been controversial in his home country, and it isn't hard to see why. Synonyms posits that it's better to be uncomfortable in a strange land than comfortable in a land that Yoav describes in a barrage of synonyms: mean-spirited, nasty, fetid. It's an observation that comes informed by grizzled experience, and underscores a current of emotional maturity that runs through the film.

An elementary school teacher once told our class that there are no true synonyms, that words may have similar functions but their meanings are just a bit off, scrambled, imperfect, their etymologies estranged. In France and Israel you'll find differences in weather, streetscapes, personalities, but you'll also find similar restaurants, stores, parks.

Conversely, if you change your location, you'll still be the same person, as we learn of Yoav — his Israeli roots are a bit stronger than he might like. From one place to another, your experience will be shifted, the culture askew. That's the tragedy of Synonyms. As Yoav strives to abandon his Israeli heritage, he finds himself digging in deeper, becoming ever more mean-spirited, nasty, fetid. Yoav's France is a synonym of his Israel. The people around him are different, but he remains, irrevocably, unchanged.