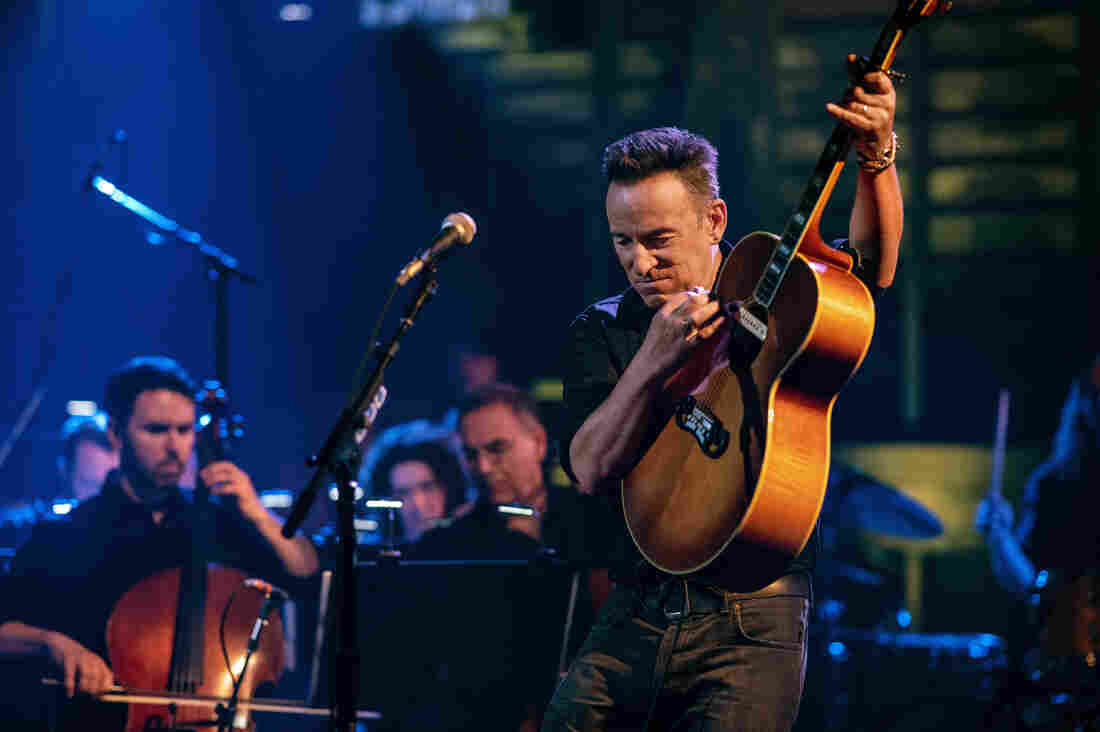 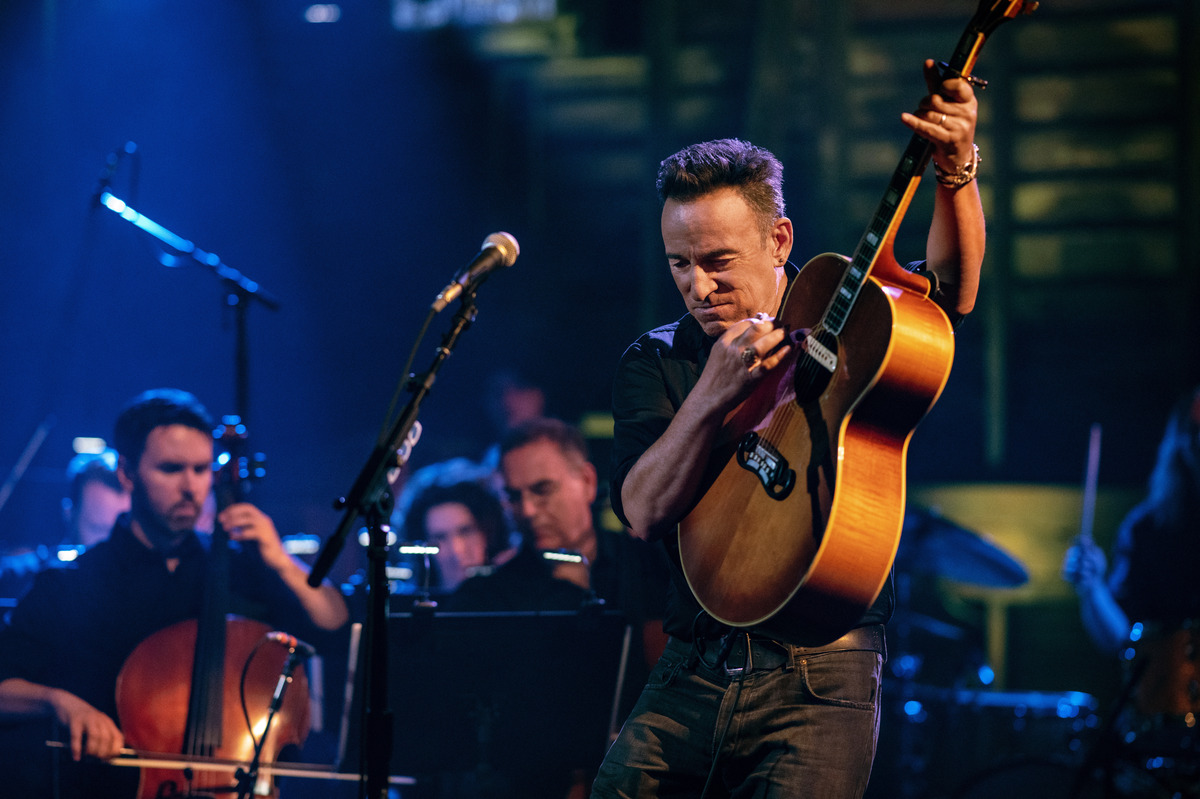 Bruce Springsteen brings his new album to the silver screen in the concert movie, Western Skies.

Newly-minted septuagenarian Bruce Springsteen has been firmly in legacy mode ever since he took that long knee-slide across the stage at the Super Bowl XLIII halftime show a decade ago.

To hear him tell it, not long after his then-59-year-old crotch smooshed up against the camera lens as 97.4 million viewers watched helplessly, he began writing what became his 2016 memoir Born to Run. In the book, he was newly candid about his struggles with depression, and how a skinny longhair who "never saw the inside of a factory" dreamt up the persona of working-class humility and gentle masculinity that the world has known for 40-odd years as The Boss. He then adapted the book into a Tony Award-winning solo play and Netflix special. A few years earlier, he'd begun releasing low-cost recordings of concerts from throughout his career via his website — a curatorial gesture from a legendary performer whose gigs had always been widely bootlegged.

So what to make of Western Stars, the new sight-track to his first record of all-new material since that knee slide? Initially conceived as a concert film intended to take the place of a tour supporting Western Stars-the-album, Springsteen and longtime videographer Thom Zimny (who here shares directing credit with The Boss for the first time) elected during the editing process to expand its scope. The spine of the film remains the 14-song concert; Springsteen fronting a 30-piece orchestra in a hundred-year-old barn on his New Jersey horse farm, doing all the Western Stars numbers plus a dead-earnest cover of "Like a Rhinestone Cowboy" — a hit for Glen Campbell in the same year that Born to Run (the album, not the book) landed a 25-year-old Springsteen on the covers of Time and Newsweek.

All He Wanted Was To Be Free: Where Bruce Springsteen's 'Western Stars' Came From

Bruce Springsteen Channels Roy Orbison In 'There Goes My Miracle'

It's the collective half-hour of interstitial material that's more suspect. We get drone-shot aerial footage of horses running free in Jersey and in Joshua Tree, voiceover that can't help but feel more portentous than the spoken introductions that might've accompanied these songs on stage, and typical music-video slo-mo stuff of The Boss driving his mid-century pickup truck along that dusty plain, hobbling into the barn, vamoosing down that lonesome old trail. I'm Bruce Springsteen, the movie says whenever its star isn't actually speaking, and I approved this message.

Springsteen has said he considers Western Stars-the-Movie to be the third part of a trilogy comprising Born to Run and Springsteen on Broadway. The difference is that this time he's reflecting on his life through songs he wrote in his late sixties, instead of recontextualizing ones he wrote in (primarily) his twenties and thirties. And because so many of the Western Stars songs are written in character, there's some grinding of the gears when he shifts into plain talk about his own emotionally self-destructive tendencies. "For a long time, if I loved you, I'd hurt you if I could," isn't a lyric; it's just a thing he tells us. The weathered sound of his speaking voice is often more expressive than the platitudes he's intoning, which rarely tell us anything he hasn't said more eloquently in song.

As is so often the case with concert films, the best stuff is the least premeditated stuff: There's what looks like camcorder-shot footage of Springsteen and his longtime spouse/longer-time bandmate Patti Scialfa (who sings and plays guitar in the concert portion) clowning around together that probably dates from around the time they were married, in 1991. This is the most moving footage in the film because of its modesty; it was never intended for public exhibition, and it looks candid and true.

As for the musical performances, they're strong but not revelatory in the way Springsteen's live interpretations of his songs so often have been. That's because what's often most rewarding about the concert experience — especially with an artist who has such a deep catalog to draw upon — is discovering how the new songs complement selected old ones, and how rearranging songs for the stage can reveal elements that got buffed out of their studio incarnations. Contemporary recording technology offers musicians an unlimited number of choices, and many of them reconsider those choices when it's time to take those songs on the road.

But hiring an orchestra and confining the set list to the new songs means the live arrangements here are often indistinguishable the ones on Western Stars-the-album, and we don't hear anything from the Springsteen catalog reinterpreted for this lush 30-piece idiom. Springsteen's E Street-band-less tours behind The Ghost of Tom Joad in mid-90s and The Seeger Sessions a decade later foregrounded the songs from those records but also reinterpreted his older work in a way that made it feel renewed. Western Stars doesn't offer those kinds of discoveries.

For those inclined to view Springsteen as a preening poseur, Western Stars will be as laughable as anything in This Is Spinal Tap or Popstar. But even casual fans are unlikely to seek out as niche an item as Western Stars, the movie of the album, for which this there also a separate soundtrack recording available. And for Springsteen diehards — I'm raising my hand now — this is not the rich visual expansion of a very good album that its author hoped to make. It's too late to get Jonathan Demme to cinematize The River, sadly, but you could still talk to Terrence Malick about doing Nebraska. Or take a meeting with Paul Schrader and John Sayles about Born in the U.S.A. Think it over, Boss. Your legacy is too important for you to direct it yourself.