Accessibility links
Democrats Can Calm Their 2020 Anxiety By Accepting There's No One Else Democratic donors and activists worry that the party is going to nominate someone who can't win next year, and they're musing about who else could be out there. Newsflash: This is probably it. 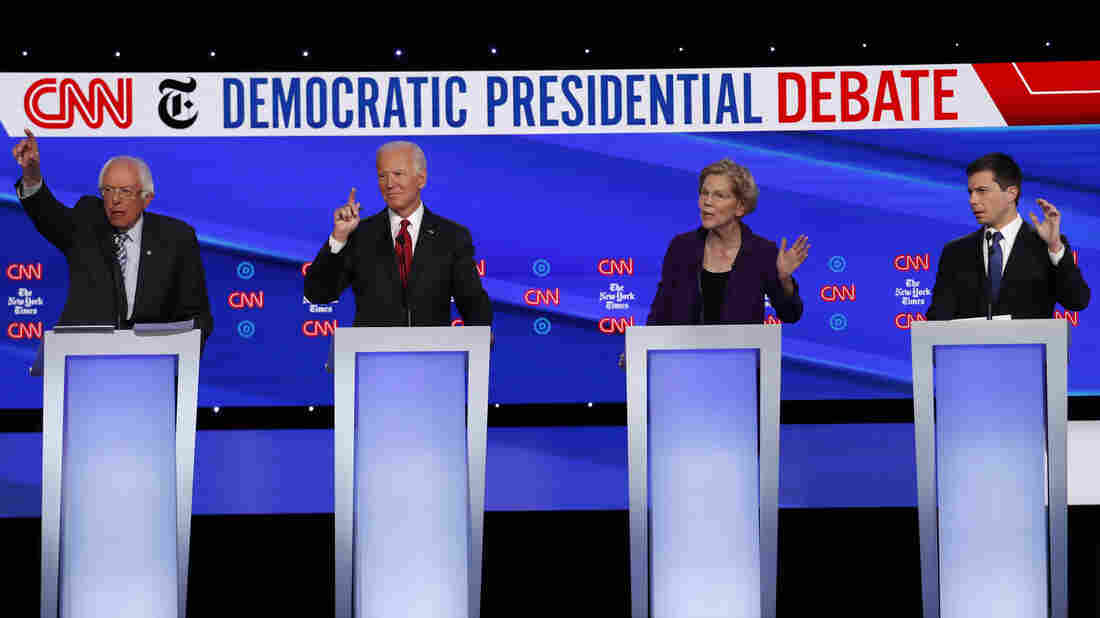 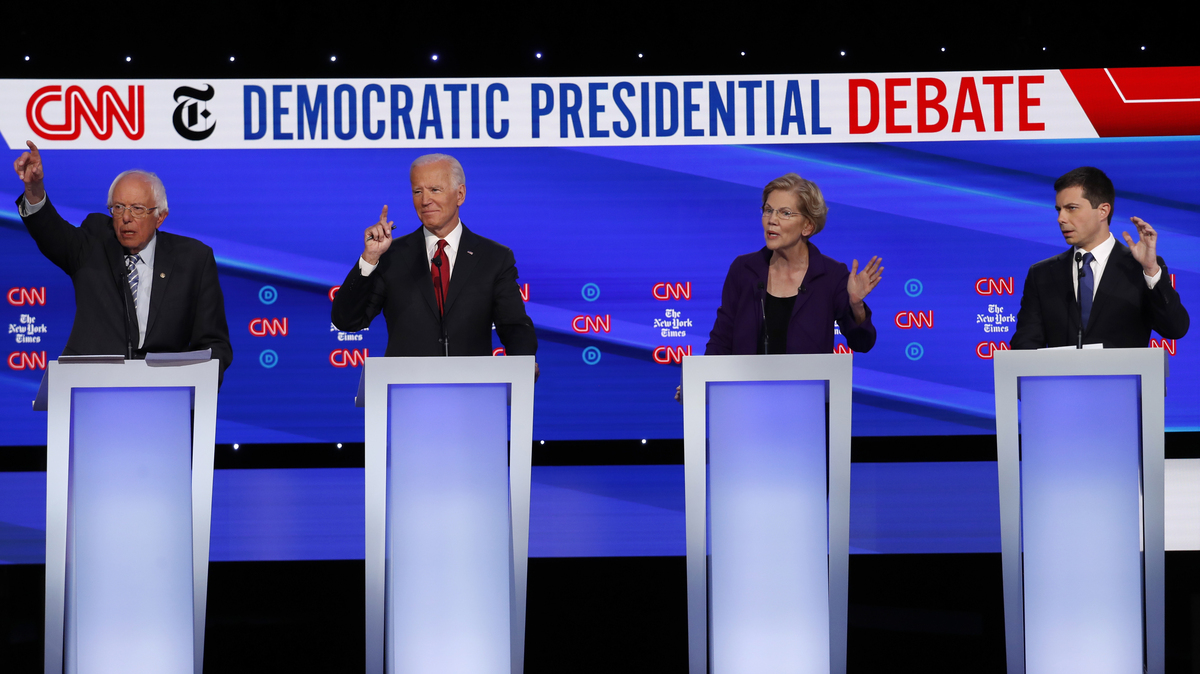 Democrats are wringing their hands, wondering who else might be out there?

Democrats do this mental gymnastics nearly every election cycle — is there anyone not running for president who is better than who is running and can definitely win in a general election?

Some real talk, though, after conversations with veteran Democratic strategists — as a Trump administration official might put it: "Get over it."

"This is the field," said Jamal Simmons, a former adviser to the Democratic National Committee during Barack Obama's 2008 presidential run. "There were 24 candidates who were running. So Democrats had a lot of choices."

These campaign veterans, not connected with any current campaigns, are more optimistic about the group than many others in the Democratic establishment. They say, sure, there are vulnerabilities, but there are always vulnerabilities with candidates in every election cycle.

What's more, they say, the top candidates are showing strength against Trump nationally and in key states, for the most part, they are getting better as candidates and are "talented, hard-working, telegenic, smart, and inspiring," said a former Obama official and campaign veteran who did not want to be named in order to speak openly about the field.

"My one concern is this trend to lurch outside the mainstream on a handful of issues," this Democrat said, pointing to policies like decriminalization of border crossings, "Medicare for All" as a replacement to private health insurance and packing the Supreme Court.

All are unpopular with a general-election electorate.

"Democrats win when we are the party of common sense," the Obama official said, noting that Hillary Clinton and Obama made sure not to adopt policies outside the mainstream in the 2008 primary race. "Some of these ideas are going to scare all those suburban women that delivered us 2018."

This hand-wringing seems to happen every presidential election.

Democrats took back the House in 2018 by flipping more than three dozen seats held by Republicans, many of which were in right-leaning districts. With Democrats in the House going down the impeachment path, some in the party are holding their breath to see how that plays with the general-election electorate. So far, independents have flipped and started to trend with Democrats on at least approving of the impeachment inquiry.

"This hand-wringing seems to happen every presidential election — perhaps more acute this time because of the threat Trump poses to our country and the strong desire to beat him," said Karen Finney, a Democratic strategist who worked on the 2016 Clinton campaign and was an adviser to Stacey Abrams during her bid for Georgia governor in 2018.

There are undoubtedly vulnerabilities of the current field. Former Vice President Joe Biden, who led in national polls for most of this year, has stumbled in debates; his fundraising has been unimpressive; and young voters have little affection for him.

Massachusetts Sen. Elizabeth Warren is seen as too liberal by some, especially because of her support for Medicare for All as a replacement to private insurance. And there's the complication of no woman ever having been president of the United States. (Whether Warren's gender would help or hurt her is an arguable point worthy of another column.)

Vermont Sen. Bernie Sanders retains a loyal following, and he continues to be a fundraising juggernaut with the love and admiration of young progressives. But his favorability ratings with a general-election electorate are not good, as a recent NPR/PBS NewsHour/Marist poll found. And nothing polls worse for a characteristic of a candidate, an NBC/WSJ poll found, than a socialist or someone older than 75.

There is buzz again around South Bend, Ind., Mayor Pete Buttigieg after a strong debate performance and a sizable bank of cash on hand ($30 million). While he favors more poll-tested policy positions, he has less experience on the national stage, is the mayor of a town of only about 100,000 people, has had his own challenges during his tenure winning over people of color that have translated to this campaign — and he's only 37 years old.

This week, pieces in both the New York Times and Washington Post put the concerns of some high-profile Democrats on full display.

"There's more anxiety than ever," Connie Schultz, the journalist and spouse of the aforementioned Ohio Sen. Brown, told the Times. (She also noted that there are calls for her husband to reconsider.)

The anxiety is palpable to former New Orleans Mayor Mitch Landrieu: "I can see it, I can feel it, I can hear it," he noted in the Times.

"You can imagine much stronger candidates," Elaine Kamarck, a longtime DNC member, told the Post.

She prefers a more moderate figure like Brown, who has said being in favor of Medicare for All as a replacement to private insurance is a bad idea, because it's unpopular in a place like Ohio.

Kamarck also floated Adm. William H. McRaven, who was in charge of the raid that killed Osama bin Laden. McRaven penned an op-ed in the Times last week, headlined, "Our Republic Is Under Attack From the President."

But running a late-entry military leader into the Democratic primary has been tried before. In 2004, nervous Democrats urged Gen. Wesley Clark to launch an ill-fated campaign, because they didn't like that someone viewed as too liberal was ahead (Gov. Howard Dean of Vermont) and the other leading candidate was seen as too uninspiring (John Kerry).

Kerry, of course, won the nomination but lost in the general election. Sound like familiar concerns? Nothing is perfectly symmetrical, though. The country then was in the middle of a war, with a president asking Americans to "stay the course" three years after the country's worst terrorist attacks in its history on Sept. 11.

George W. Bush's approval rating in the last Gallup poll before Election Day was still 48%. It eventually hit 57% in early 2005 before nosediving, as the Iraq war spiraled. That and an economic collapse led to Obama's 2008 victory.

The Clark experiment, launched in September 2003, failed. Just ask Simmons. He was part of that campaign.

"Wes Clark was a product of Democratic hand-wringing, because of Howard Dean and John Kerry," Simmons said. "All these Clinton people surrounded him and tried to build a campaign, and let me just say, it didn't really work out so well."

Clark's campaign never really worked out for lots of reasons — he was a political novice, fundraising was difficult, his loyalty to the Democratic Party was questioned and he lacked a natural charisma and constituency. He wound up finishing third in the New Hampshire primary, far behind Kerry and Dean. He dropped out shortly after.

"History would sort of argue it's too late" now for someone else to get in, Simmons said.

A constant state of worry

In 2016, there was one narrative that would never quite go away — whether one particular candidate would jump in and save the party from the Clinton email scandal.

Ironically, that was none other than Joe Biden, the man the party establishment is now so worried about because of his lackluster fundraising (just $9 million cash on hand) and spotty debate performances.

After Slamming Trump, Biden Apologizes For Referring To 'Partisan Lynching' In 1998

Clinton did win 3 million more votes than Trump; they were just in some of the wrong places.

In 2007 and 2008, some were apprehensive that a young, inexperienced black Democrat couldn't beat a war hero. Obama, it should be remembered, went on to not only win the presidency once, but reelection as the only person to do so with at least 51% of Americans' vote twice since Eisenhower.

"That's the last time that worked, and we didn't have email addresses," Simmons said. "We were carrying cellphones around in duffel bags."

What's more, Clinton's entry was after a sleepy summer in the primary when other potentially major candidates declined to run. Clinton himself faced party hand-wringing with rumors of infidelity highlighted by the Gennifer Flowers saga and because of accusations of being a Vietnam draft dodger.

All that said, an important point that shouldn't be lost is that Democratic voters don't seem all that dissatisfied with the field. The top candidates get very high favorability ratings from Democrats, as the NPR poll has shown. And, as Pew found earlier this summer, two-thirds of Democratic voters (65%) had either an excellent or good impression of the field. That's 14 points higher than 2016 on par with 2008.

"It's still early," Finney noted. "Politicos forget that voters are still getting to know the candidates, and there's still time for someone to have a breakout moment."

The dings and bruises of a primary, she argued, will be good for the eventual nominee.

"We can't be afraid that our eventual nominee will get too beat up in a primary," Finney said. "This is the time for the campaigns to deal with issues, because they will face the same attacks on a much larger, harsher scale in the general, so better to be prepared and know how to fight it.

"Look at how much stronger Obama was in 2008 after the primary."