Accessibility links
Top Conservatives Want Mulvaney To Stay As Trump's White House Chief Of Staff In an open letter, influential conservatives urge President Trump to keep his embattled chief of staff and remove the "acting" from his title. 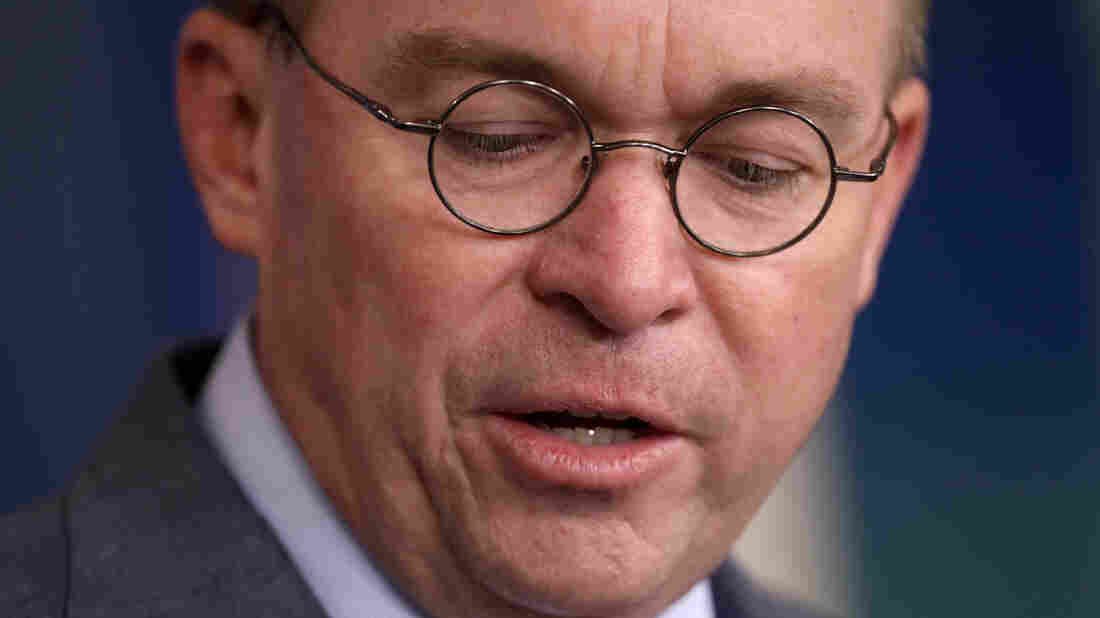 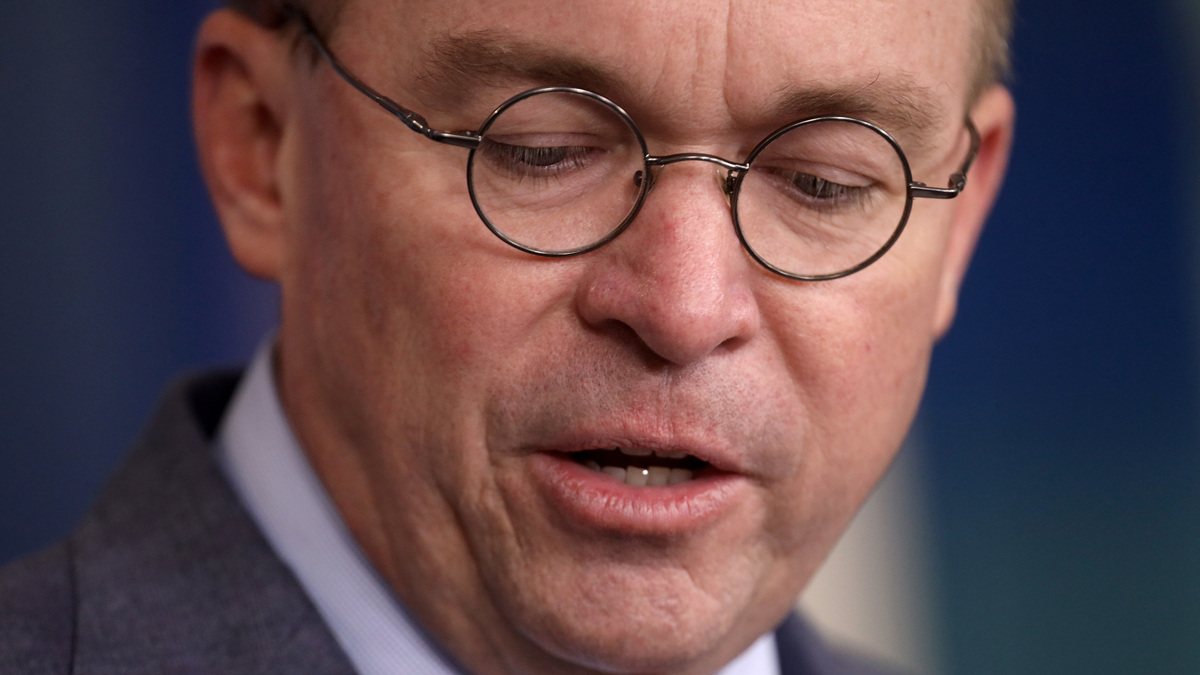 Some of the top names in conservative politics have a message for President Trump: don't fire acting chief of staff Mick Mulvaney. In fact, Trump should "make him permanent in the Chief of Staff role," they write in an open letter obtained by NPR and set to be released later Thursday.

The signatories, who include Tony Perkins, Jenny Beth Martin, Ginni Thomas, David McIntosh and J. Kenneth Blackwell, lead influential conservative groups and are often consulted by President Trump and White House officials. That such a letter is being sent at all hints at the precariousness of Mulvaney's current position.

He's been in the job for almost a year and President Trump hasn't seen fit to lift the "acting" from Mulvaney's title. Now the fast-talking jovial former congressman from South Carolina is a central player in the Ukraine scandal and his words and actions may have helped fuel the impeachment push against his boss.

"Recent news reports demonstrate that that the D.C. Swamp is attacking him—and we believe it is because he has been the most successful Chief of Staff in this administration to advance the Trump pro-America agenda," the letter states, citing tax cuts and deregulation during his tenure. "He is a proven leader, and an outspoken advocate of conservative principles and policies."

The letter from conservatives comes after earlier this week word leaked out of a White House senior staff meeting that aides had cheered Mulvaney for the job he was doing. In the Trump administration, leaks are common and often have a purpose.

"He was told he is doing a good job, and the entire room agreed and applauded," said an aide who was in the room. "It was a very supportive meeting."

Mulvaney had kept a relatively low profile as acting chief of staff until a week ago, when he held a press briefing best described as disastrous. He's also a rare Trump-White House survivor, having served as White House budget director since the start. But like everyone in President Trump's orbit, Mulvaney seems acutely aware that it could all end in a tweet.

"The president gets to use who he wants to use," Mulvaney said last week. "If the President wants to fire me today and hire somebody else, he can."

In the past, Mulvaney has downplayed the significance of having 'acting' stuck at the front of his title. Trump has said he liked the flexibility of it.

"He could make me the permanent chief of staff tomorrow and then fire me on Thursday. He could leave me in the 'acting' for the next 6 years. It just doesn't make a difference," Mulvaney said in an on-stage interview with the Wall Street Journal over the summer. "I do think he likes the environment that we're in now just because there's a lot less infighting."

Current and former White House aides say the environment Mulvaney has set up as chief of staff is free flowing and a bit harried at times. One said Mulvaney "knows who the boss is," and will say things like "I've been given clear orders." That jibes with how Mulvaney has described his approach.

"It's sort of a mix between the complete freewheeling wild, wild west of Reince Priebus and the militaristic Marine camp of John Kelly," said Mulvaney in that Wall Street Journal interview, comparing himself to his two Trump-era predecessors. "We've found a happy medium between those two things."

In other words, he's giving a president who seems to thrive on a certain amount of chaos, exactly what he wants.

"Chaos without a strategy is a prescription for disaster," said Leon Panetta, who was chief of staff during the Clinton administration and has little positive to say about Mulvaney's stewardship of the White House.

This week's testimony from Ambassador William Taylor in the House impeachment inquiry alleges that Mulvaney wasn't just an enabler. He said Mulvaney delivered the order from the president to budget officials to block military aid to Ukraine and that Mulvaney himself maintained a skeptical view of Ukraine. Already, in that press briefing last week Mulvaney put himself right in the middle of the funding hold up.

"I've been in the office a couple of times with him talking about this," Mulvaney said, describing conversations with President Trump. "He said, 'Look Mick, this is a corrupt place. Everybody knows it's a corrupt place.'"

On live television, Mulvaney said there were three reasons the money was held up: corruption in Ukraine, a concern that other countries in Europe weren't contributing enough - and something that got him in a lot of trouble and prompted a rapid effort to put the toothpaste back in the tube.

"Did he also mention to me in the past the corruption related to the DNC server? Absolutely," said Mulvaney. "No question about that. But that's it. And that's why we held up the money."

Mulvaney was referring to a debunked conspiracy theory about Russian hacking of the DNC. He was also publicly confirming the very thing the White House and President Trump had been denying for weeks: that financial support to Ukraine hinged on a politically motivated investigation. Within hours, the White House had issued a clarification but not before both the Justice Department and president Trump's outside legal team put out statements distancing themselves from Mulvaney's description.

Congressional Republicans who served with Mulvaney when he was a Freedom Caucus member quickly called him a friend. They didn't try to defend his remarks, instead focusing on the retraction.

Republican Congressman Francis Rooney from Florida was one of many lawmakers alarmed by what Mulvaney had said.

"How do you walk back? I mean it's not like you were misinterpreted. The words were, seemed to me very clear," he told All Things Considered. "And I was surprised that he did that. But, you know, I don't know how you walk that back.

President Trump, was asked about it and had notably little to say.

"I think he, I think he clarified it," Trump said on Friday. Since then, reporters have shouted questions to Trump about Mulvaney's status and the president hasn't responded, even as he has answered questions on many other topics.

Asked whether Trump has confidence in Mulvaney, a spokesman said: "Yes. Once he doesn't, you know it."