Accessibility links
Watch: Rep. Mark Meadows Emotionally Eulogizes Rep. Elijah Cummings "Perhaps this place and this country would be better served with a few more unexpected friendships. I know I've been blessed by one," Meadows said Thursday of the Maryland Democrat. 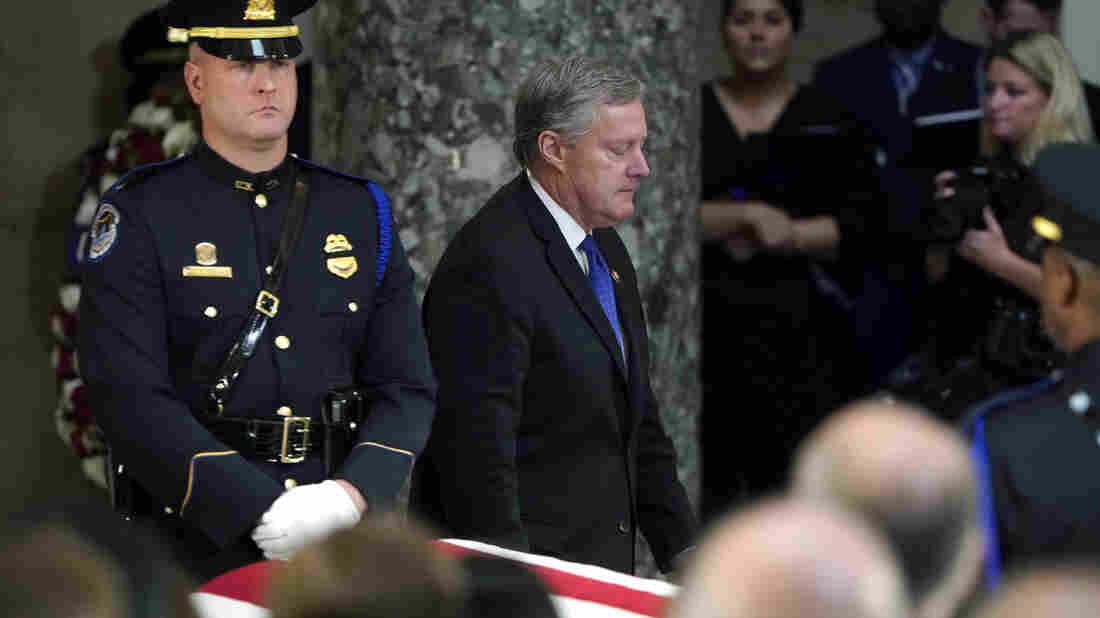 Rep. Mark Meadows closes his eyes as he walks past the casket after speaking during the memorial service for his close friend Rep. Elijah Cummings, D-Md., on Capitol Hill on Thursday. Joshua Roberts/Pool/Getty Images hide caption 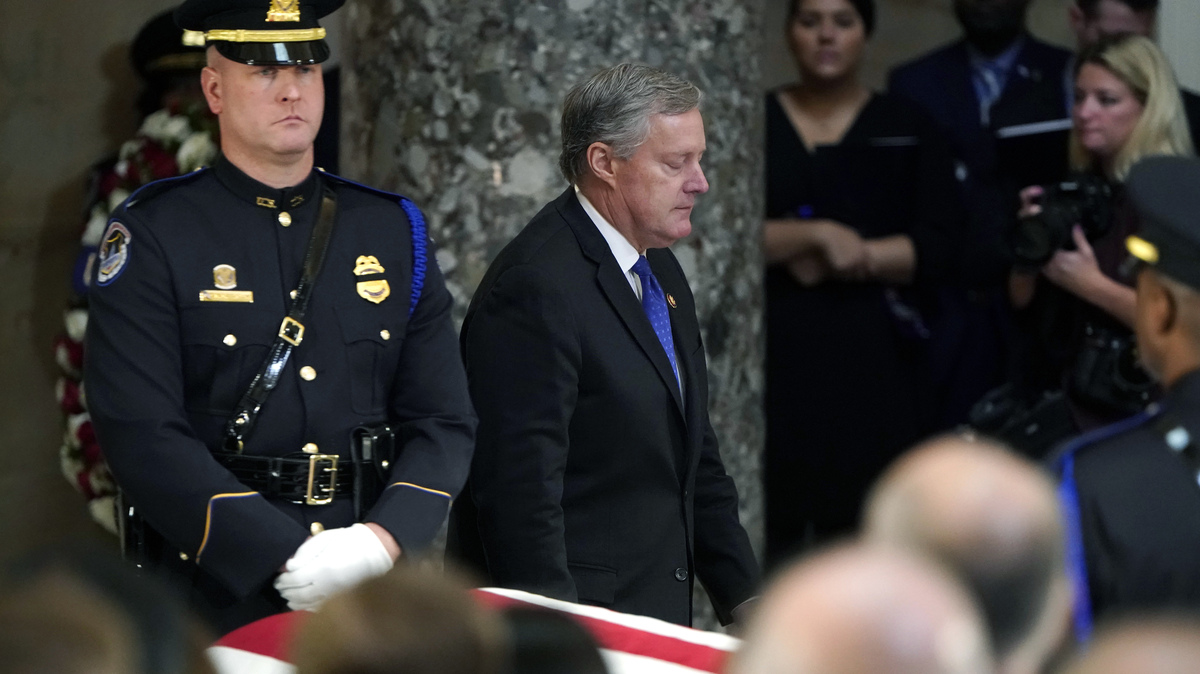 Rep. Mark Meadows closes his eyes as he walks past the casket after speaking during the memorial service for his close friend Rep. Elijah Cummings, D-Md., on Capitol Hill on Thursday.

Republican Rep. Mark Meadows of North Carolina gave an emotional eulogy Thursday for his friend and Democratic colleague Rep. Elijah Cummings of Maryland, who is lying in state at the National Statuary Hall of the Capitol.

"He's called a number of things — a father, a husband, friend, chairman. For me, I was privileged enough to be able to call him a dear friend," Meadows said.

"Some have classified it as an unexpected friendship, but for those of us that know Elijah," he continued, "it's not unexpected or surprising."

Meadows said he and Cummings shared personal stories and intimate secrets "that Elijah never shared with anyone because he was a man of his word."

Perhaps this place and this country would be better served with a few more unexpected friendships.

Cummings died last week at age 68, having represented Maryland in Congress for more than two decades. Funeral services will be held Friday.

"Scripture talks about, 'Let not your heart be troubled. You believe in God; believe also in me,' " Meadows continued. " 'In my father's house are many mansions. If it were not so, I would have told you. I go to prepare a place for you.' "

"So Elijah has left his tent to go to a mansion, a better place. Perhaps this place and this country would be better served with a few more unexpected friendships," he said. "I know I've been blessed by one."

As chair of the powerful House Oversight Committee, Cummings had taken a lead role in investigating President Trump.

"He had a smile that would consume his whole face, you know that," Meadows said. "But he also had eyes that would pierce through anybody who would stand in his way."

That sentiment was echoed by other lawmakers who spoke Thursday.

"His voice could shake mountains, stir the most cynical hearts, inspiring us all to be better," Senate Minority Leader Chuck Schumer, D-N.Y., said.

"Elijah Cummings never forgot where he came from," Schumer continued, "and never lost sight of where he wanted his country to go."

The moment was a rare glimmer of anything bipartisan on Capitol Hill these days. Meadows was among the Republicans on Wednesday who protested the House impeachment inquiry into Trump. As a member of the House Oversight Committee, Meadows already has access to the closed-door testimony, but more than two dozen Republicans said they demand more transparency in the impeachment inquiry process.

There will be a funeral service for Cummings on Friday in Baltimore.