Accessibility links
Hundreds Of Musicians Pledge To Cut Ties With Amazon In 'No Music For ICE' Letter The letter, which has been signed by Deerhoof, Hurray for the Riff Raff, Damon & Naomi and more, comes in light of a music festival put on by Amazon Web Services. 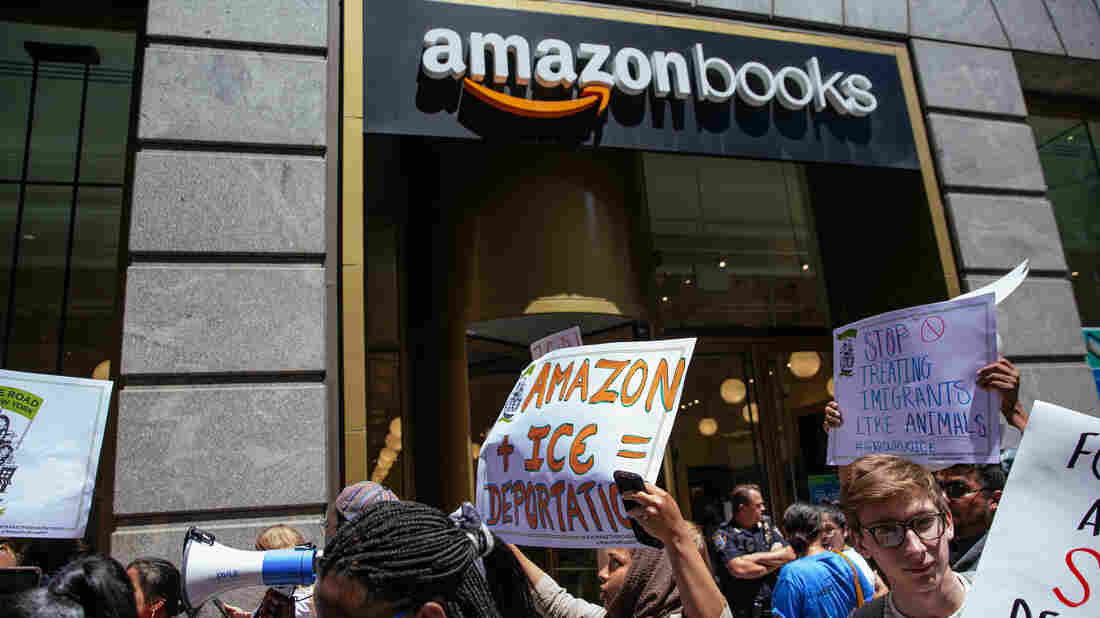 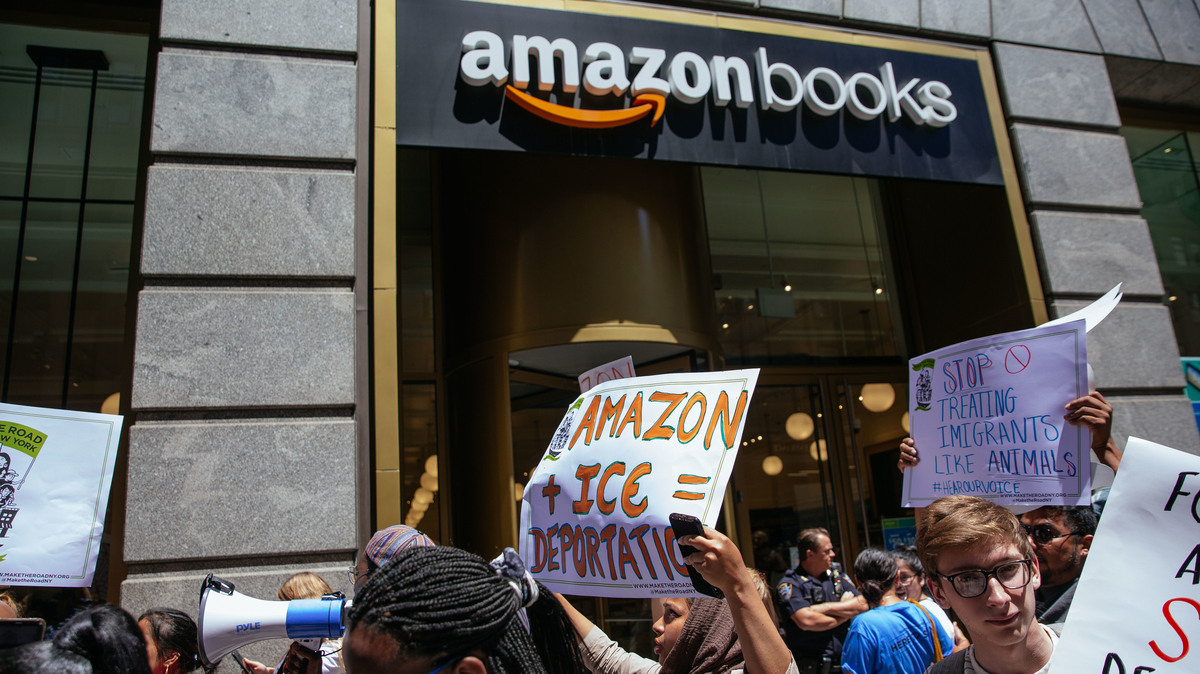 Protesters march to an Amazon store to raise awareness of Amazon's facilitation of surveillance efforts by Immigration and Customs Enforcement.

At the place where music, technology and politics converge, you'll find ... discord. A group of more than 380 musicians — including well-known indie artists like Ted Leo, Deerhoof, Damon & Naomi, Zola Jesus, Downtown Boys and Sheer Mag — pledged in an open letter on Thursday to cut all business ties with Amazon over the work of its gargantuan Amazon Web Services subsidiary.

The letter, organized in part by the activist group Fight for the Future and the public introduction to No Music for ICE, was spurred by AWS' plans for a music festival called Intersect. The letter demands that AWS cancel all contracts with independent businesses and government agencies, such as Immigration and Customs Enforcement and Customs and Border Protection, over human rights abuses it alleges they have committed. It also demands that Amazon end work on "projects that encourage racial profiling and discrimination," such as facial recognition technology. (A form of this tech has been deployed broadly in China, where it's reportedly used to target members of the Uighur community and arrest suspects outside concerts.) Amazon's connection to ICE is through the database services it provides to Palantir, a data analytics company that has contracts with the agency. "We will not allow Amazon to exploit our creativity to promote its brand while it enables attacks on immigrants, communities of color, workers, and local economies. We call on all artists who believe in basic rights and human dignity to join us," it reads.

The letter comes one week after the Black Madonna, a highly regarded and internationally popular DJ, expressed surprise at Amazon's involvement in a festival she had been booked to play. "If you were shocked I'd play for Amazon, well that makes two of us," she wrote on Twitter. The Black Madonna claimed that the ownership of the festival, scheduled for Dec. 6 and 7 in Las Vegas, was not made clear at the time she signed the performance contract. After the DJ had burned "some bridges," as she wrote, AWS agreed to release her from the contract.

Regardless, the festival's current lineup is formidable, including mainstream acts such as Foo Fighters, Spoon and Beck; lauded and laureled artists such as Kacey Musgraves, Brandi Carlile and Thundercat; and younger talents Japanese Breakfast, Jpegmafia and Sudan Archives.

Amazon did not respond to a request for comment on the letter or confirm whether any of the scheduled performers have canceled their contracts since the letter's publication.

The letter is the latest public challenge to tech companies' relationships with agencies such as ICE and CBP. Last year, 650 employees of business software company Salesforce petitioned Marc Benioff, its CEO, to cancel its contract with CBP. In August, more than 1,000 employees of Google did the same. This past July, Amazon Web Services itself was protested against over the same issue, this time outside the Javits Center in New York City, where it was holding an AWS summit.

Amazon Web Services bills itself as a cloud platform that provides the infrastructure — the highway part of the information superhighway — for things like the music that you hear when clicking play on Spotify, the show you're watching on Netflix or the airline tickets you're thinking of purchasing on Expedia. (Spotify, for what it's worth, is now in the midst of migrating to Google's cloud platform.) But the scale of AWS means that it has essentially become a backbone — or, at least, a healthy number of vertebrae — supporting the Internet. That includes the databases of agencies like the Transportation Security Administration and CBP. In 2018, the research group Synergy classified the company's market share as being "in a league of its own." As of the most recent financial quarter, AWS was worth more to Amazon than its retail segment, bringing in over $600 million in net income above Amazon.com in North America.