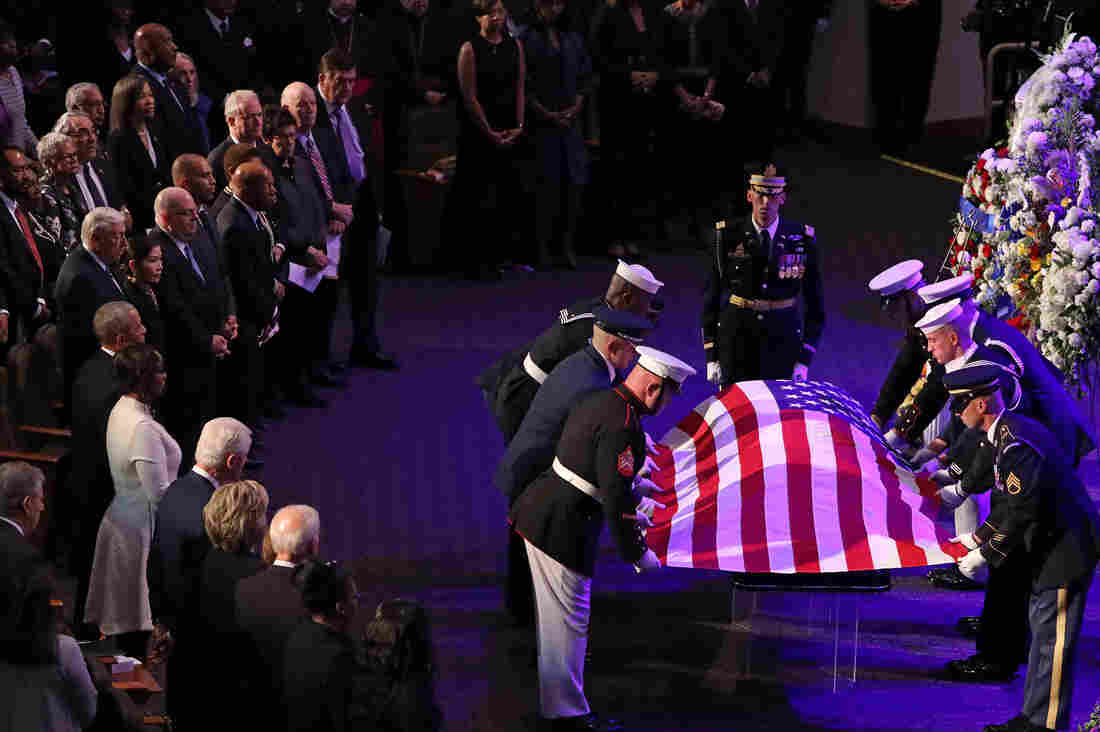 A military honor guard lays the U.S. flag on the casket of Rep. Elijah Cummings during his funeral service at New Psalmist Baptist Church in Baltimore on Friday. Chip Somodevilla/Getty Images hide caption 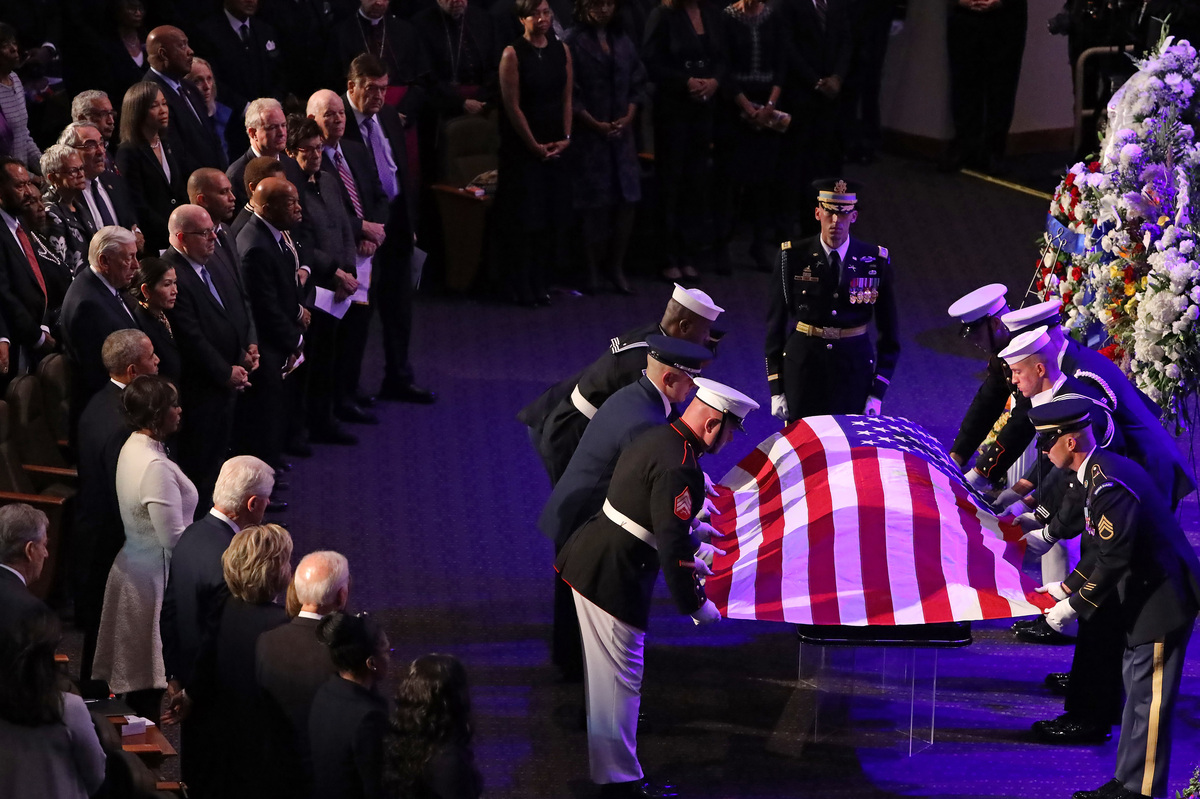 A military honor guard lays the U.S. flag on the casket of Rep. Elijah Cummings during his funeral service at New Psalmist Baptist Church in Baltimore on Friday.

If there were any doubts about the indelible legacy the late civil rights advocate and Maryland Rep. Elijah Cummings left in his nearly 40 years of public service, look no further than the political luminaries who delivered tributes at his funeral in Baltimore on Friday.

Former Presidents Barack Obama and Bill Clinton, Speaker of the House Nancy Pelosi and former Secretary of State Hillary Clinton spoke, telling stories about a man who went from humble beginnings to occupy a place of power in the U.S. government.

"As a boy, Elijah's dad made him shine his shoes and tie his tie, and they would go to the airport — not to board the airplanes, but to watch others do it," Obama said. "I remember Elijah telling me this story. Robert would say, 'I have not flied. I may not fly. But you will fly one day.' "

Referring to the tradition of calling senior elected officials "the honorable," Obama said, "But Elijah Cummings was honorable before he was elected to office. There's a difference."

"He helped us many times in Baltimore," said educator Daniel Murray. "We'd be low on funds sometimes, he'd get with the mayor, get with the governor and push that funding for Baltimore city schools."

Cummings, who was the chairman of the House Oversight Committee, is remembered as a fierce champion of his district, which includes large swaths of inner-city Baltimore and surrounding suburbs. He died last week from longstanding health issues. He was 68.

"He was a wonderful man," said Lekiesha Dorsey. She and her mother, Tina, had come to the church but they weren't able to get in. She added, "I've just always known him to be a loving caring person and he was just always about the people the community no matter what race, age."

"He was just about love and just supported everybody," Dorsey said.

Friday's funeral at New Psalmist, where Cummings was a member for roughly four decades, was the culmination of three days of tributes in Baltimore and Washington, D.C.

Cummings lay in state on Thursday at the U.S. Capitol's Statuary Hall. At a ceremony for lawmakers and relatives of Cummings, Rep. Mark Meadows, R-N.C., delivered an emotional eulogy calling Cummings "a dear friend" and spoke about what some have called an "unexpected friendship."

"Some have classified it as an unexpected friendship but for those of us that know Elijah," Meadows continued, "it's not unexpected or surprising."

He added: "Perhaps this place and this country would be better served with a few more unexpected friendships ... I know I've been blessed by one."

On Wednesday, a steady stream of well-wishers came to pay tribute to Cummings, who lay in repose at Morgan State University, a historically black college in Baltimore.

Cummings was born and raised in Baltimore and lived there until his death. He was one of seven children, born to parents who had once been sharecroppers on the same land on which their ancestors were enslaved.

He rose from those humble beginnings to become the dean of Maryland's black elected officials and a leader in the U.S. Congress. After Democrats took control of the U.S. House earlier this year, Cummings became chairman of the Oversight Committee, one of three House committees leading the impeachment inquiry into President Trump.

This summer, before the impeachment inquiry was launched, Cummings defended his beloved Baltimore after Trump disparaged the city in a series of tweets, calling it "disgusting" and "rat and rodent-infested."

Cummings fired back at Trump, saying he goes home daily, adding, "Each morning, I wake up, and I go and fight for my neighbors." A few weeks later, he invited Trump to take a personal tour of Baltimore.

"I want him to come and look at my entire city. I'll ride with him for hours if he asked to," Cummings said at the National Press Club in August.

For many, Cummings' forceful defense of the city, coupled with the olive branch, reflected the strength and grit that embodies many Baltimore residents. 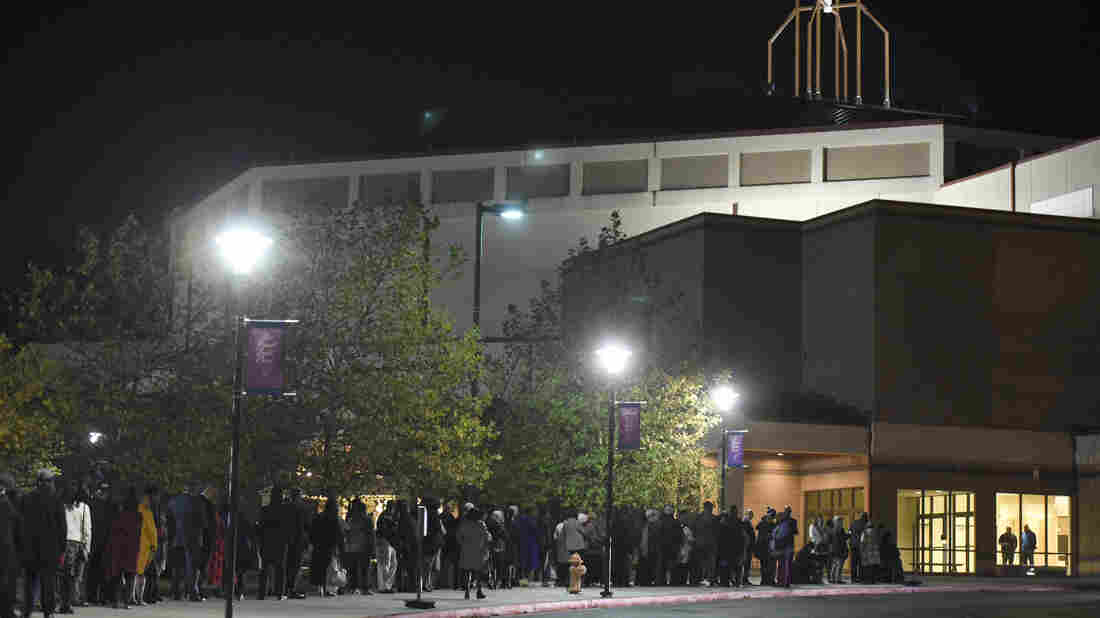 Before the sun rose Friday, mourners lined up for a public viewing before the funeral service of Rep. Elijah Cummings at New Psalmist Baptist Church in Baltimore. Steve Ruark/AP hide caption 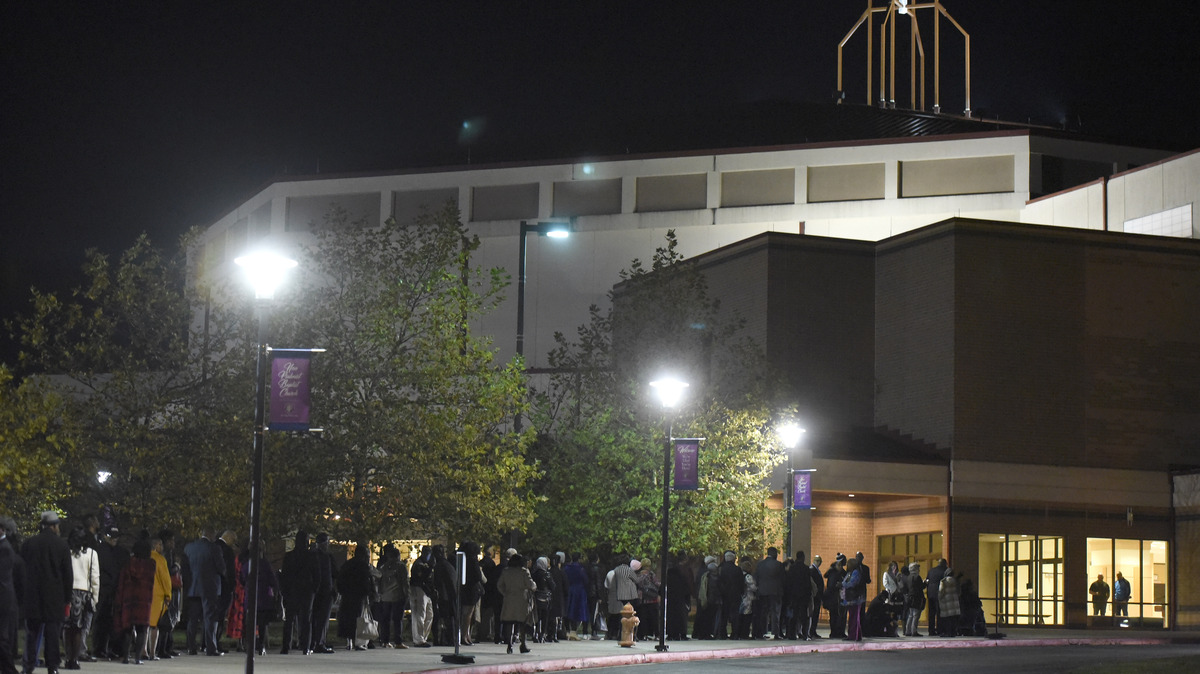 Before the sun rose Friday, mourners lined up for a public viewing before the funeral service of Rep. Elijah Cummings at New Psalmist Baptist Church in Baltimore.

In 2015, after the death of Freddie Gray, a young black man who died in police custody, Baltimore erupted in riots. Cummings, at the time one of the most powerful members in Congress, was in the streets of Baltimore with a bullhorn calling for calm.

Cummings is remembered as someone who relentlessly fought to lower the prices of prescription drugs and tighten gun laws and advocated for criminal justice reform. He introduced legislation that helped protect the rights of whistleblowers and bills to curb gun trafficking. According to his office, Cummings often said his 2010 vote in favor of the Affordable Care Act was the most important he ever cast.

He studied at Howard University, a historically black college in Washington, D.C., and attended law school at the University of Maryland, graduating in 1976. He entered politics in 1982.

Cummings served 14 years in the Maryland House of Delegates. During that time, he became the first black person in the state's history to be named speaker pro tempore. After being elected to Congress in 1996 via special election, he held that seat until his death last week.

"I thought that Elijah would make a great mayor of the city and possibly the governor of the state. But he enjoyed being a lawmaker," former Baltimore Mayor Kurt Schmoke, told NPR last week.

"There was something about Congress that kind of kept him grounded in his neighborhood and the community," said Schmoke, who is now the president of the University of Baltimore, before adding: "And he just really loved it."

Maryland Gov. Larry Hogan has until Monday to announce a date for a special election for Cummings' vacant seat. According to Maryland state law, the primary election must be held at least 65 days after the governor announces the official proclamation that the seat is vacant. A special general election would then take place no fewer than 65 days after that.