Accessibility links
Impeachment Inquiry: Vital Testimony, Revelations From Kyiv And More News A key diplomat validated a kernel of the Ukraine affair to House investigators, Ukrainian officials told reporters something critical, and more. Here's what you need to know. 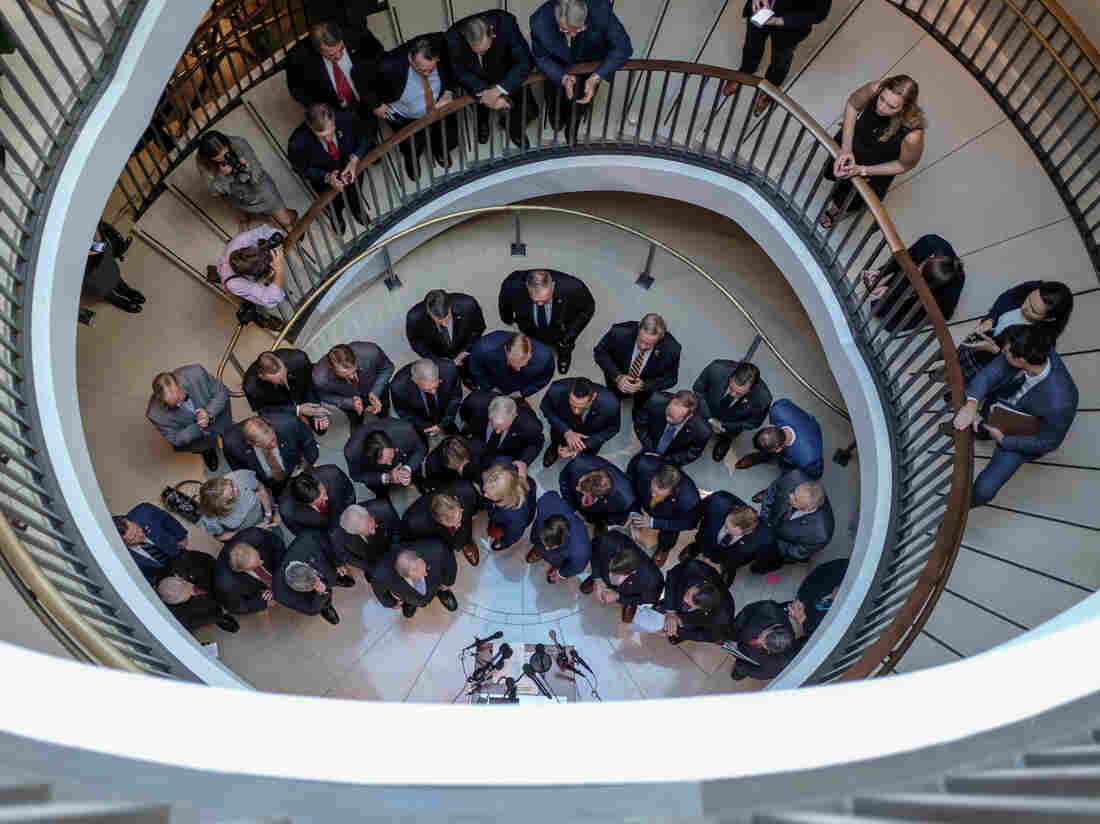 Some House Republicans spoke at a press conference Wednesday to oppose the impeachment inquiry before barging into a secure conference room and interrupting the testimony of a Pentagon official. Alex Wroblewski/Getty Images hide caption 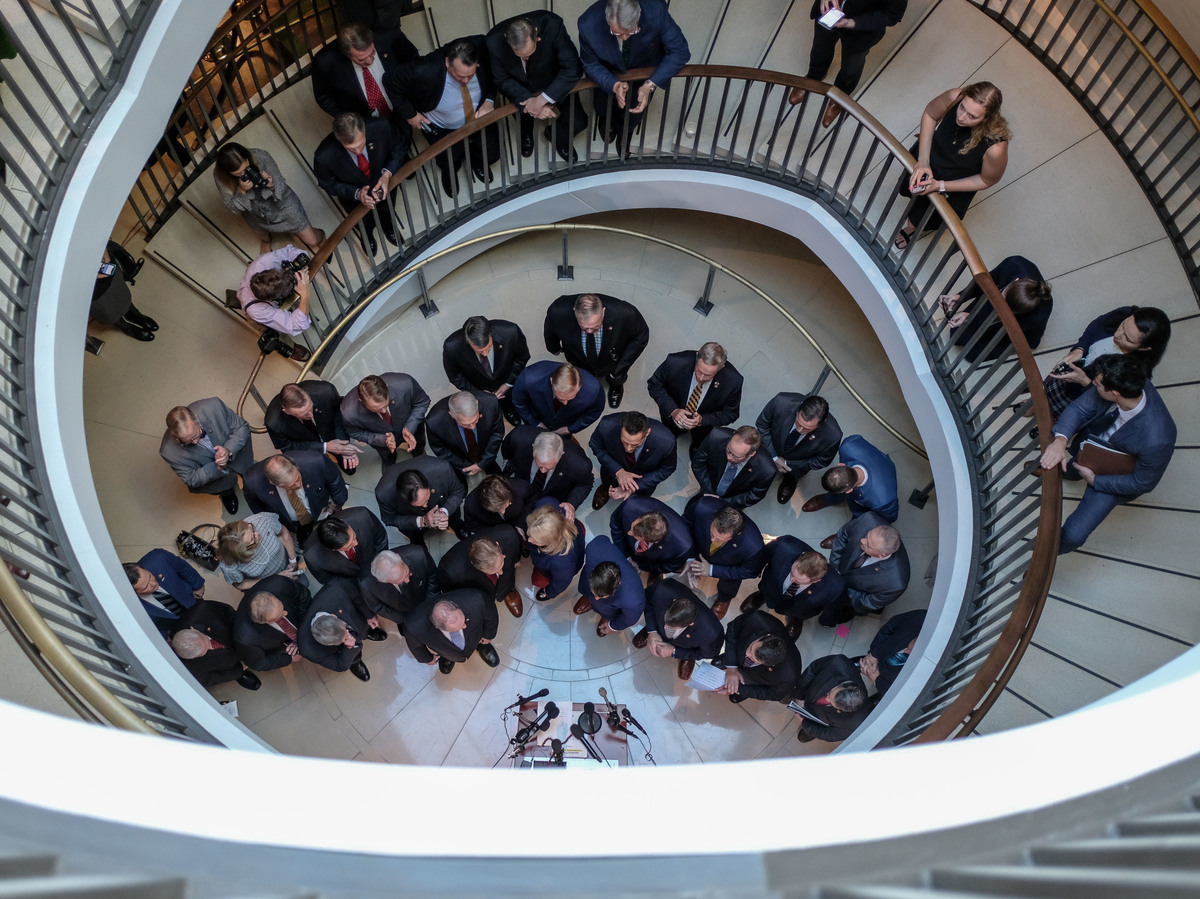 Some House Republicans spoke at a press conference Wednesday to oppose the impeachment inquiry before barging into a secure conference room and interrupting the testimony of a Pentagon official.

President Trump outlined his Ukrainian pressure strategy directly to a top diplomat who was described as being charged with helping to execute it, another key diplomat told House investigators this week.

Meanwhile, sources in the Ukrainian capital told two U.S. news agencies that Kyiv had been pressured directly about American assistance in the spring.

So it was another big week in House Democrats' impeachment investigation of Trump and the Ukraine affair — and for Republicans' increasingly aggressive defense of the president.

William Taylor, the acting boss of the U.S. diplomatic mission in Kyiv, told House investigators on Monday that he'd been told that Trump wanted to put Ukrainian President Volodymyr Zelenskiy "in a public box." The testimony was closed-door, but his opening statement was obtained by some media outlets and confirmed by NPR.

If Zelenskiy committed openly that he'd launch the investigations Trump wanted, in support of Trump's aims for the 2020 election, that would secure military assistance and engagement with Washington, Taylor said he'd learned.

Taylor, a career foreign policy expert, did not want to go along — and said so, he told House investigators.

Taylor protested to his compatriots, to then-national security adviser John Bolton and in writing in a cable to Secretary of State Mike Pompeo. Taylor's threat to quit, as revealed in text messages released in an earlier chapter of the Ukraine affair, was and remains real, he said.

That account strengthened the public understanding that has already formed about the Trump pressure scheme for Ukraine, with a few important caveats.

One was that Taylor said the way he learned about Trump's statements and intentions was from the U.S. ambassador to the European Union, Gordon Sondland — but Sondland had earlier told Congress that he didn't realize until later what he and other diplomats were doing.

Per Taylor, Sondland wasn't on the outside helping with a scheme he didn't appreciate in real time. He was part of it, Taylor said.

The discrepancies between Sondland's and Taylor's versions of events have prompted some Democrats to air the possibility of calling Sondland back, although it isn't clear yet whether he has formally been asked to return to the Capitol.

Another discrepancy opened up this week between the existing public accounts of the U.S. pressure on Ukraine and what may have been taking place behind the scenes.

The New York Times and The Associated Press reported on Wednesday that government sources in the Ukrainian capital said Washington pulsed Zelenskiy's camp directly about the need to accommodate Trump's desires or face a freeze-out.

One meeting about this was convened as early as May, according to the AP report, well ahead of the now-famous July 25 phone call in which Trump asked Zelenskiy for a "favor" on the investigations.

That AP report also would substantiate accounts given by an anonymous intelligence community whistleblower whose complaint about the Ukraine affair helped animate the impeachment inquiry.

In that report, the whistleblower describes learning that Zelenskiy and his camp had been primed before that call about the need to "play ball" with Trump, while acknowledging being unclear about who primed him and how.

Compare these accounts to public statements by Zelenskiy that he never felt "pressured," in the phrase of reporters' questions, and that he never was told that the U.S. was freezing military assistance for Ukraine in the expectation that he might reciprocate in the way Trump wanted.

Zelenskiy's comments strengthened, for a time, the defense offered by the White House and its supporters that there was never any explicit tie between what was flowing from Washington and expected in return from Kyiv.

But this week's testimony and press reports eroded that narrative, and if there are documents — Ukrainian or American — that verify that some American made a more or less direct statement to some Ukrainian about these matters, that would be key evidence for Democrats.

Trump and his supporters also have responded to the criticism about the merits of the Ukraine policy being improper.

The conduct of foreign policy is always and necessarily political, as acting chief of staff Mick Mulvaney has said, and all U.S. diplomats — like Sondland and Taylor — work for Trump.

In short, this is how business is done, the argument goes; "Get over it," Mulvaney said.

Former acting Attorney General Matthew Whitaker aired a different defense: Even conceding the possibility that Trump had overstepped his authority, there's no law or provision in the Constitution that has been violated.

"Abuse of power is not a crime," Whitaker said — and accordingly, impeachment is uncalled for.

Foot soldiers and the ineptitude defense

The defense of Trump wasn't limited to public statements.

On Wednesday, after a press conference filled with condemnations of Democrats, a group of GOP lawmakers walked into the secure conference room where that day's deposition was taking place.

That brought the proceedings to a halt for several hours; some of the members weren't authorized to be there and some of them were carrying their mobile phones, which are strictly forbidden in a sensitive compartmented information facility.

That delayed the depositions with Deputy Assistant Secretary of Defense Laura Cooper — who handles Ukraine, Russia and Eastern European policy for the Pentagon — but her testimony eventually went ahead.

So did Republicans' amplified advocacy for Trump, which included a new emphasis on Ukraine's failure to take the actions that Washington was requesting.

U.S. military assistance was restored in early September without any public statement by Zelenskiy about investigations then or since. That means, as House Minority Leader Kevin McCarthy, R-Calif., told reporters including NPR's Lexie Schapitl, there was no quo in exchange for the ostensible quid.

Ukraine's government has said that it is "auditing" cases involving a gas company connected to the Trump pressure strategy, but that commitment appeared to stop short of the investigations that Trump requested.

The Wall Street Journal picked up McCarthy's thread on Thursday with an editorial that echoed earlier defenses of the Russia imbroglio: Even if Trump and aides wanted a certain outcome, they might have bumbled in trying to achieve it — failing to commit a crime means there was no crime and, accordingly, no case for impeachment or removal.

"This matters because it may turn out that while Mr. Trump wanted a quid-pro-quo policy ultimatum toward Ukraine, he was too inept to execute it," as the Journal editorial board argued. "Impeachment for incompetence would disqualify most of the government, and most presidents at some point or another in office."

House investigators' depositions are expected to resume on Saturday behind closed doors with another State Department diplomat, Philip Reeker.

One immediate next question about the impeachment inquiry is "will they appear?"

Kupperman is no longer in the administration, and so it would be tougher for the White House to assert that his testimony might be shielded by executive privilege, the doctrine that allows an administration to conceal some of its internal workings.

Then again, as a lifer within the Republican national security world, Kupperman might try to resist testifying out of solidarity and in view of the White House's objections to Democrats' inquiry.

That has held with respect to Vice President Pence, Secretary of State Mike Pompeo and others, including two officials from the Office of Management and Budget who spurned Democrats' invitations.

The next tests likely will be Kupperman and Morrison.