Accessibility links
Review: 'Agent Running In The Field,' By John Le Carré Le Carré's latest novel presents an aging, embittered spy dealing with multiple claims on his loyalties — and a challenger to his supremacy at badminton, a sport le Carré himself played and loves. 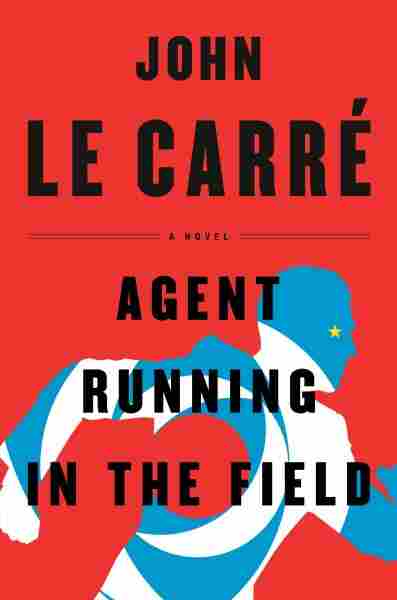 Agent Running in the Field

At 88, novelist John le Carré continues to turn out books that writers of any younger age would kill to publish. Agent Running in the Field, his 26th, opens cheekily with a badminton challenge: Nat, close to retirement and even closer to redundancy due to his inability to accept authority, is obsessed with this racquet sport.

He belongs to a peculiarly genteel (read: wholly British) sort of gym, the Athleticus Club, where there's a rota for matches, a dressing room, and some kind of bar-cum-bistro where club champion Nat retires for pints of lager after he's whupped his latest opponent. Badminton, he tells us, is "stealth, patience, speed and improbable recovery. It's lying wait to unleash your ambush, while the shuttle describes its leisurely arc." He considers it caste-free, a haven from the "chers collègues" in the intelligence service he works for at whom he constantly snipes.

Not only is Nat displeased with the rung to which he's been demoted at work, not only does he loathe the class hijinks represented by the various higher-ups he must entreat as part of the assignment he is finally given, but he has a beloved wife, Prudence, who's a powerful human rights attorney working on taking down Big Pharma. His loyalties may not be divided — he and Prudence do not have a perfect marriage, but it is strong — but they are tugged on, and constantly.

The tugging intensifies when Ed Shannon shows up, young, fit, and looking to take on the best badminton player around. Nat cannot resist this challenge, and soon the pair meets weekly — Nat almost always winning (at least at first), but also looking forward to their odd afterchats, in which Ed expounds on his hatred of the current American president, as well as the system that president supports, which has strengthened their own country's Brexiteers. Nat occasionally puzzles over Ed's braying rants, but his head is full of plans for the odd-man-out substation he's been made chief of, in what he believes is his last chance to make his mark on the service to which he's devoted much of his life.

Before turning to What Happens Next, a word about le Carré's prose: Not only does it hold the coiled energy of a much younger writer, it fits the bitter, angry narrator's voice exceptionally well. That's important, because Agent Running in the Field relies less on action than some le Carré titles, and many other spy novels, and more on dialogue. If the author obsesses about betrayal, his mechanism for that obsession is the conversation. A scene in an old-school London fish restaurant, between Nat and his protégée Florence crackles with Nat's knowledge that he's been played.

A word about le Carré's prose: Not only does it hold the coiled energy of a much younger writer, it fits the bitter, angry narrator's voice exceptionally well.

However, Nat's been played before. If you've paid attention to his comments about badminton, you'll understand that, as well as understanding that he knows what to do. "Agent running," Nat's specialty, is a long game and a long con, something that can take months or years of work. Cultivating a source to work against their government may happen after a few beers, or not happen until numerous cautious forays take place. Nat also knows that he's in play by his own government: A British subject, his birth name is "Anatoly," because his military father married "the daughter of insignificant White Russian nobility residing in Paris," who made sure her son had a Russian-language tutor. His second language, and third (Madame Galina taught him to "speak Russian with a French intonation, French with a Russian intonation, and such German as I have with a mixture of both."

Thus Nat's career-end machinations and skepticism gain a layer of le Carré nostalgie de la boue, the sad knowledge that the enemy's call is coming from inside the house. After all his years of service, Nat's career may be technically over because of his missteps — or it may be over because he no longer has a worthy opponent. Readers following the brisk plot may or may not guess where their protagonist's loyalty truly lies. There are options. And they may not want to guess, preferring to be carried along by the twists and turns (yes, there's a woman, named Anastasia; yes, there's a work trip to the Czech Republic; there's even a wedding and some gunfire and a gardening scene to remind us there'll always be an England).

The pre-publication press release tells us this is le Carré's "Brexit novel," but that diminishes a novel that may be a portrait in miniature of modern spies, but is in miniature as detailed and astonishing and entertaining as anything in its genre today. Although I wish John le Carré the retirement of his choosing, I'm glad he hasn't taken it yet, and instead continues to work out his obsessions on the page.