Accessibility links
Questions For Sheila O'Connor, Author Of 'Evidence Of V' Sheila O'Connor never knew her maternal grandmother, who was imprisoned in a state reform school when she became pregnant at 15. But now, she's reconstructed her grandmother's life in fictional form.

Imprisoned As 'Immoral', A Lost Grandmother Inspired 'Evidence Of V'

Imprisoned As 'Immoral', A Lost Grandmother Inspired 'Evidence Of V' 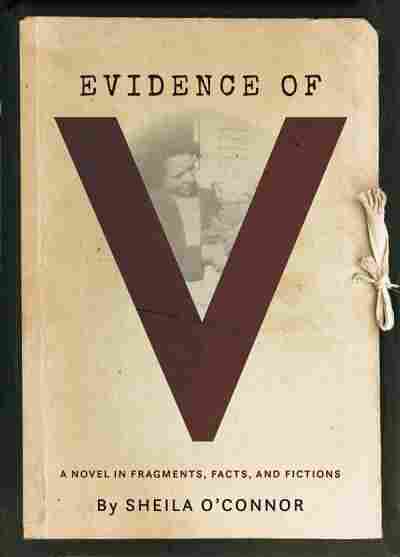 A Novel in Fragments, Facts, and Fictions

Sheila O'Connor's Evidence of V is a novel built around a void, a blank space in O'Connor's own life: The story of her unknown maternal grandmother, a talented young singer who ended up sentenced to six years in a state reform school for the crime of becoming pregnant at 15.

"I did not know her, and I cannot know the truth of her story, but like so much 'missing family' she has occupied a major place in my imagination for most of my life," O'Connor tells me in an email conversation.

O'Connor's grandmother was one of the many girls and women imprisoned for "immorality" in the early part of the 20th century. She set her story in Minnesota, but, she adds, "these institutions were in every state, and tens of thousands of girls were incarcerated for long sentences during that time. In Minnesota, all committed girls were held until 21. At the age of 18 they were paroled to private homes as domestic servants. Many of those girls escaped."

O'Connor pieced together as much as she could of her grandmother's story, and created a fictional counterpart: V, a teenager in Minneapolis in 1935 who takes a job as a nightclub singer.

If you could sum V up in a couple of sentences, how would you describe her?

For me, V is a force. She's talented and ambitious, she's alive with all the energy of a passionate 15-year-old, but she's also determined to be a successful performer. She's driven by her artistic desires and undone by her youth and naiveté. She is an ambitious nonconformist, in a time when girls and women were expected to aspire to motherhood and marriage. She will not be broken.

What was your research process?

It unfolded over a decade and felt exhaustive, and yet I know there is so much left for me to learn. I read a great deal of scholarship on the history of girls in juvenile detention, I researched laws, and adoption, and Minneapolis in the 1930's, as well as juvenile detention facilities throughout the United States. I had my mother's original file with some facts, but the facts couldn't form a story. I also worked with primary sources: government reports, newspaper articles, archival documents. I was never able to form a full picture, but I made a book from what I'd found and what I had imagined.

You've written the book in a very distinctive, fragmentary style – why did you choose to do it that way?

In part this goes to your previous question. The form of the book reflects secrecy and absence. In many ways, it is a story of erasure, and fragments, and pieces, and I wanted the reader to have the same experience I had trying to construct a narrative out of imaginings and historical fragments. In many ways this is the work of family history, or even national history, when there is an investment in secrecy or silence. How do we make peace with what we can't know?

What's V's legacy in your own life?

I'm not sure I'll ever know that. I believe my mother was profoundly shaped by her early months in the institution and the forced separation from her young mother, just as she was shaped by the lack of information about her own history. We know a great deal more about mother-infant bonding today, and we know the trauma that can result when that process is interrupted. How much of that did I inherit? My siblings? How much did that trauma affected our lives, our childhoods, our adulthoods? It feels very present.

What do you want readers to take away from this book?

Oh, so much. First, there is the history of what was done to girls, and the countless ways that history is still very much present in the way girls are victimized today. There's a certain amount of shock when the reader discovers what was done to girls, and at that same time the realization that less has changed than we'd like to think. It's also a book about ancestors, the ways they elude us and shape us, and the impossibility of knowing the full truth of what came before our time. I think most readers have these family mysteries, and I'm hoping the book speaks to their own struggles and wonders.