Accessibility links
Trump Ads On Russian Propaganda Sites: It's Not Collusion. It's The Algorithm Some familiar political advertisements end up alongside Russian government-backed messaging online. But it's not Moscow's doing. It's about Google — and you.

Trump Ads Alongside Russian Propaganda: It's Not Collusion. It's An Algorithm

Trump Ads Alongside Russian Propaganda: It's Not Collusion. It's An Algorithm 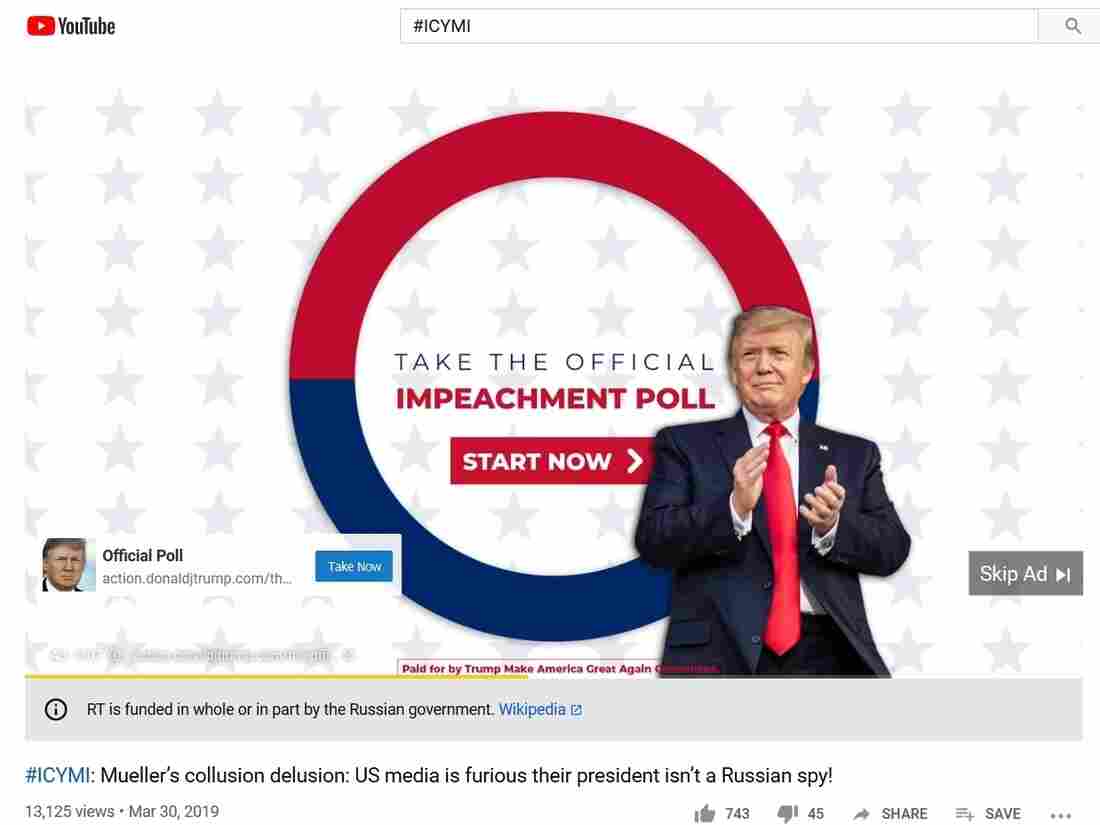 A Trump campaign ad as it appeared on a Russia Today video on October 23. Screenshot by NPR/YouTube hide caption 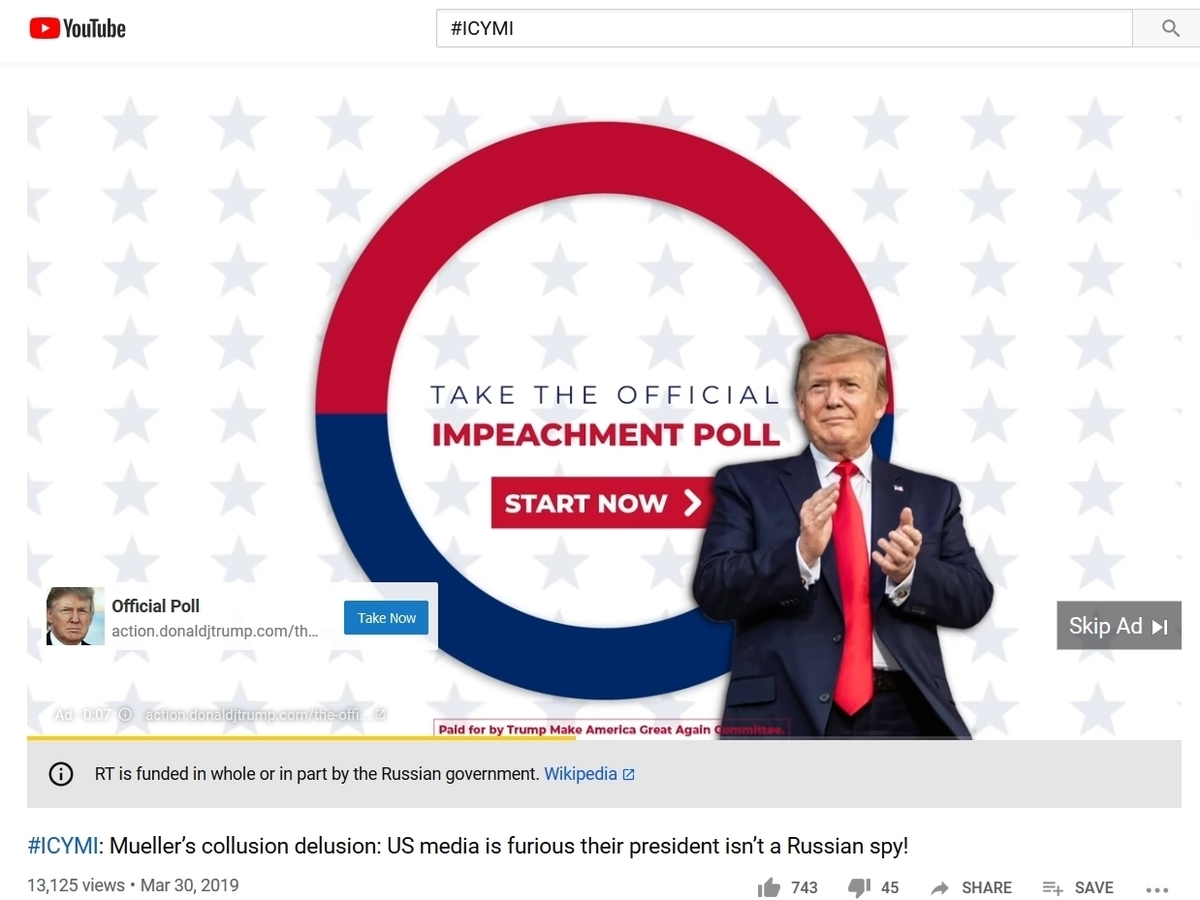 A Trump campaign ad as it appeared on a Russia Today video on October 23.

They look like talk shows, news programs, and comedy accounts, but they all share two common traits: They are unabashedly anti-American, and they carry a warning from YouTube:

"RT is funded in whole or in part by the Russian government."

Russia Today, or RT, is Russia's main propaganda channel in the West. It's been accused of meddling in U.S. elections and is now required by the U.S. government to be registered as a "foreign agent."

But government-backed messages aren't the only content that users get on the YouTube version of RT. They also get advertisements — including, it appears, 2020 presidential campaign ads.

We have not targeted those channels at all.

For example, over the course of two days this week, a PC at NPR's office in Washington was shown a campaign ad for President Trump dozens of times on RT's YouTube channels, as well as another Russian propaganda outlet, Sputnik.

Tim Murtaugh, the Trump campaign's communications director, denied having anything to do with the ad's placement.

"We have not targeted those channels at all," he wrote in an e-mail.

Other conventional American political and issue ads, including for Democrats, sometimes appeared alongside the RT videos too.

The presence of conventional ads next to foreign government messaging highlights the complexities of campaign advertising online today.

Here's how it works: A campaign produces an ad and then approaches a platform such as Google, which owns YouTube, or Facebook. The platforms have oceans of data about their users and can offer buyers a richly detailed audience for their money.

In YouTube's case, it typically provides two ways advertisers can target an audience: either by targeting users with certain demographic features — men likely of a certain age in the Eastern U.S., say — or by targeting certain content.

Murtaugh says the Trump campaign focuses on the viewer rather than the channel. It's particularly interested in "users who have previously engaged with our website or our content," he wrote.

The nitty-gritty of exactly which user sees which ad is ultimately automated, and computers are getting increasingly sophisticated at matching users, channels and ads, according to Christo Wilson, a researcher who studies YouTube at Northeastern University.

"You don't have to tell the algorithm to learn this stuff. It will on its own," he says.

The technology is advancing as online political advertising is surging.

With the election still over a year away, campaigns are spending millions of dollars to promote their candidates. Spending on Google platforms is already in the tens of millions of dollars, according to statistics collected by the company.

"Judging by the amount of money that we've already seen invested, I think we're just going to see a huge influx of cash, especially when the general election starts," says Shannon Kowalczyk, chief marketing officer with the progressive group ACRONYM, which is tracking online advertising this election season.

According to ACRONYM, Trump has spent some $25 million in online advertising on Google and Facebook thus far. On YouTube, the campaign is dispersing tens of thousands of ads, many of which are slight variants on an existing design.

The campaign tracks which variations work better and then iterates and repeats them.

The type of ad that appeared next to RT's content is designed to draw in new supporters, said Laura Edelson, a graduate student at New York University who studies online political advertising.

Edelson believes it's probably being spread over a large swath of YouTube. Transparency data provided by Google seems to indicate many Trump campaign ads cast a wide net.

In a statement, YouTube said it gave advertisers control over where their ads appear.

"Advertisers on YouTube choose how to target their ad campaigns and can always opt out of having their ads run on a particular channel," the company said.

But it's an extra step that not everyone takes.

"They could do something like say, 'I want to advertise against news channels' and they just didn't exclude RT. That is a possibility," Edelson says.

Murtaugh did not say whether the campaign had or hadn't decided to exclude RT.

It's another example about how important the platforms are: If Google or YouTube considers RT to be "news," for these purposes, that is consequential in terms of where political advertisements appear.

What the machines are learning

At rival Facebook, the algorithms that automatically match ads to viewers and content are rapidly improving, according Alan Mislove, colleague of Wilson's at Northeastern University.

"We're seeing sort of shifts towards a lot of smarts in the delivery algorithm," he says. This means ads can reach the right demographic, even when the advertiser doesn't specify who should see it, but Mislove also says it might cause ads to go to unintended corners of the internet.

The interplay between ads, viewers and content is not straightforward. And the software and rules underlying it all are constantly evolving, Kowalczyk says.

Platforms such as Facebook and Google and others are changing how the buying of political advertising works on their platforms "what seems like every day," she says.

Kowalczyk predicts more unpredictable results could come as the 2020 campaign heats up. As the ad dollars sweep in and the algorithms evolve.

"Yeah," she said. "I'm sure some weird stuff could happen."