Accessibility links
An Advocate For Kazakhs Persecuted In China Is Banned From Activism In Kazakhstan Serikjan Bilash signed a plea deal after Kazakh officials charged him with "inciting ethnic tensions" for his work documenting repression against Kazakhs and in China's Xinjiang region. 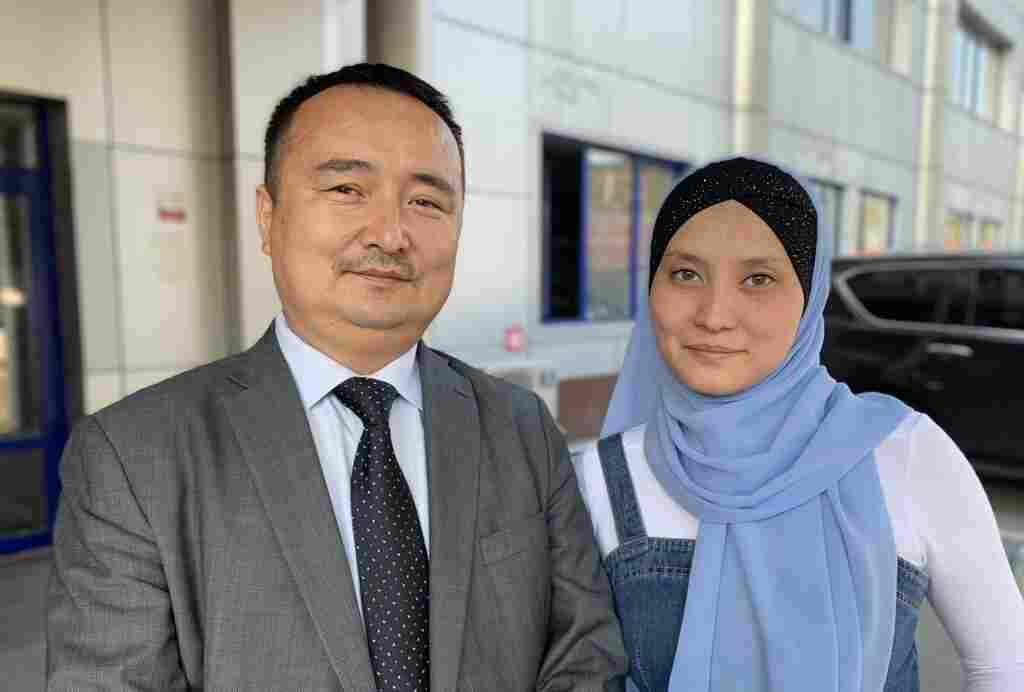 Serikjan Bilash (left), co-founder of Atajurt, and wife Leila Adilzhan in Almaty, Kazakhstan. Per the terms of a plea deal, Bilash can't work in political activism for the next seven years, which includes calling out China's repression of Kazakhs. Emily Feng/NPR hide caption 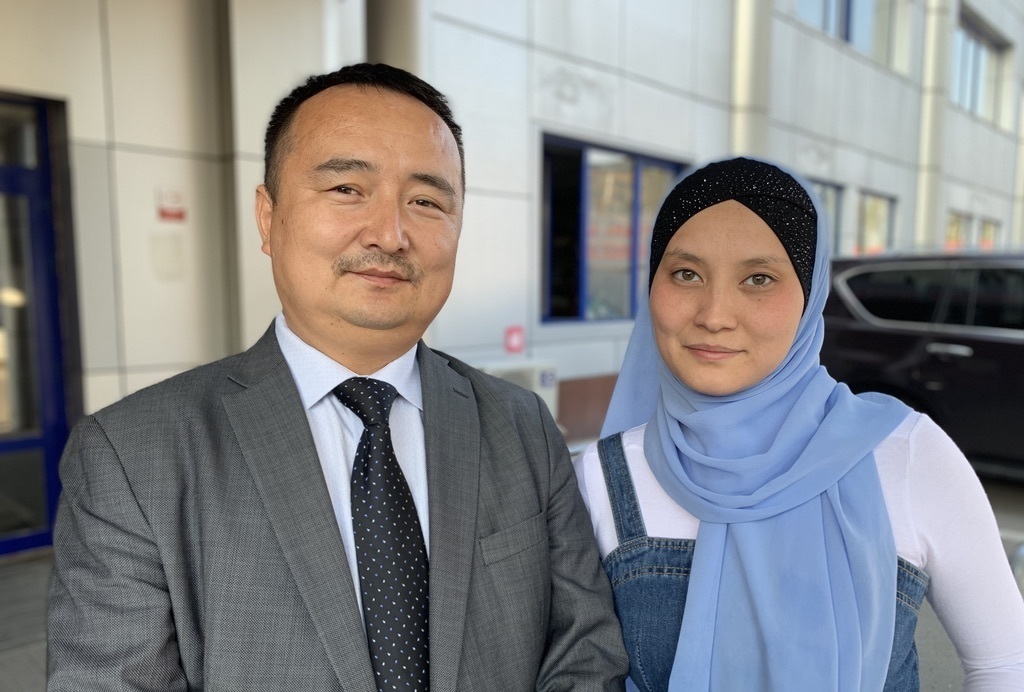 Serikjan Bilash (left), co-founder of Atajurt, and wife Leila Adilzhan in Almaty, Kazakhstan. Per the terms of a plea deal, Bilash can't work in political activism for the next seven years, which includes calling out China's repression of Kazakhs.

One afternoon last month, Serikjan Bilash went to the watchdog organization he co-founded in Almaty, Kazakhstan, to celebrate the opening of its new office.

Since its founding in 2017, the organization, Atajurt Eriktileri, has publicized thousands of accounts of ethnic Kazakhs who are among the primarily Muslim minorities rounded up in detention centers in Xinjiang, China.

But instead of entering the office that day, Bilash hovered outside the door, reaching only his hand in to greet well-wishers. The Kazakh government barred him from political activism for seven years for the charge of "inciting ethnic tensions."

"I can work as a taxi driver. I can work as a cleaner or a barman. But I cannot work as a political person," says Bilash, a Kazakh citizen born in China. "I can't stand up, and I can't speak openly to my nation. They closed my mouth."

The punishment against Bilash has bolstered suspicions among Kazakh rights advocates that Kazakhstan's government is working to silence a prominent critic of China in order to please its powerful neighbor and investment partner. That has sent chills through Kazakhstan's Chinese-born community.

NPR recently spoke to Bilash in Almaty in his first interview since taking a plea bargain in August to avoid jail time.

"I had no choice," Bilash says of the plea deal. He knows some of his supporters were disappointed with his decision to stop fighting the charges.

His lawyer, Aiman Umarova, was so upset with the decision she resigned as his counsel in protest rather than sign the plea bargain.

On the other side of Kazakhstan's eastern border, Chinese officials in Xinjiang have rounded up an estimated 1.5 million Uighurs, Kazakhs and other primarily Muslim ethnic minorities in detention centers. China's leaders have portrayed the centers as part of a re-education campaign to prevent terrorism.

Atajurt records dozens of video testimonies of relatives of missing Kazakhs and of people who were released from the Xinjiang centers each day.

Bilash's ordeal began in early March, when he noticed six burly men wearing earpieces pacing inside the crowded Atajurt office. They told him they were not there to testify and left.

Shaken by the visit, Bilash did not go home, opting instead to stay at a hotel that night. Within hours, Kazakh security officials stormed his hotel room and took him to a police station. Officials said he was being charged with inciting ethnic tensions for filming a video in which he calls for an "information jihad" against Chinese influence, Bilash says.

He then had to sign a document saying that, until his trial, he agreed to be kept under police watch at a friend's house in the Kazakh capital of Nur-Sultan, more than 750 miles north of his home in Almaty.

"A lot of Bilash's supporters are in Almaty, and [the authorities] were afraid they would come to the court or his house," says Leila Adilzhan, Bilash's wife.

'They Ordered Me To Get An Abortion': A Chinese Woman's Ordeal In Xinjiang

For nearly six months under house arrest, Bilash alternated between pacing and writing about Kazakh history. The stress exacerbated Bilash's preexisting heart condition, causing minor heart palpitations that felt like "something is burning inside you, just like a cigarette is burning into your skin," he says.

He says the authorities would sometimes make him do odd tasks, such as sign blank sheets of paper and to appear in a video that was critical of a Kazakh opposition leader in exile.

He says he also received visits from a prominent government figure: Maksat Skakov, a non-staff adviser to Kazakhstan's president, Kassym-Jomart Tokayev. "He said, 'You are our national hero ... but Kazakhstan has so many clients: national security, the people who are close to China. They want to jail you,'" Bilash recalls the adviser telling him.

Skakov did not reply to multiple calls and texts for comment. Neither did the Kazakh president's office or the Foreign Affairs Ministry respond to emailed requests for comment.

Then, in the morning of Aug. 16, Bilash says, officials suddenly brought him from Nur-Sultan, where he was under house arrest, back to Almaty. He was ushered into a courtroom and presented with two sets of prosecution documents by Skakov, the adviser. One set was a seven-year prison sentence, the other was a plea deal.

Bilash signed the plea deal. It meant saying he was guilty to inciting ethnic hatred and agreeing to abstain from political activities for seven years.

But in his interview with NPR, Bilash denies the charge. He says that in the Atajurt video he was actually calling for an informational struggle, not a violent war.

"I had 20 minutes to make a decision," Bilash remembers. "I know the adviser of Mr. President is a big person. He does not joke, and the president was not joking. I really think I only had two choices, so I chose my family."

Bilash is now under semi-house arrest at his home in Almaty until November. The deal requires regular police check-ins and prevents him from leaving the city.

He is happy to spend time with his two young sons, ages 5 and 2, but he misses the thrill of his political activism at Atajurt.

A close friend, Bekzat Maxutkan, is directing its new office in Bilash's absence. But the group has struggled. In September, it split into two factions after Bilash and his supporters suspected two members had been co-opted by pro-Chinese groups.

"Yes, I have my family, but my favorite thing is politics: protecting my nation, fighting against China," Bilash says. "Sometimes I think I am already a dead person. I lost my soul. I lost my freedom."