Accessibility links
Gas Station Converts To Electric Charging Station And Speeds Ahead Of Curve As the electric car industry ramps up, one gas station in Takoma Park, Md., has already changed lanes. The owner hopes to motivate other stations to make the shift.

Listen · 3:35 3:35
Gas Station Converts To Electric Charging Station And Speeds Ahead Of Curve 3:35 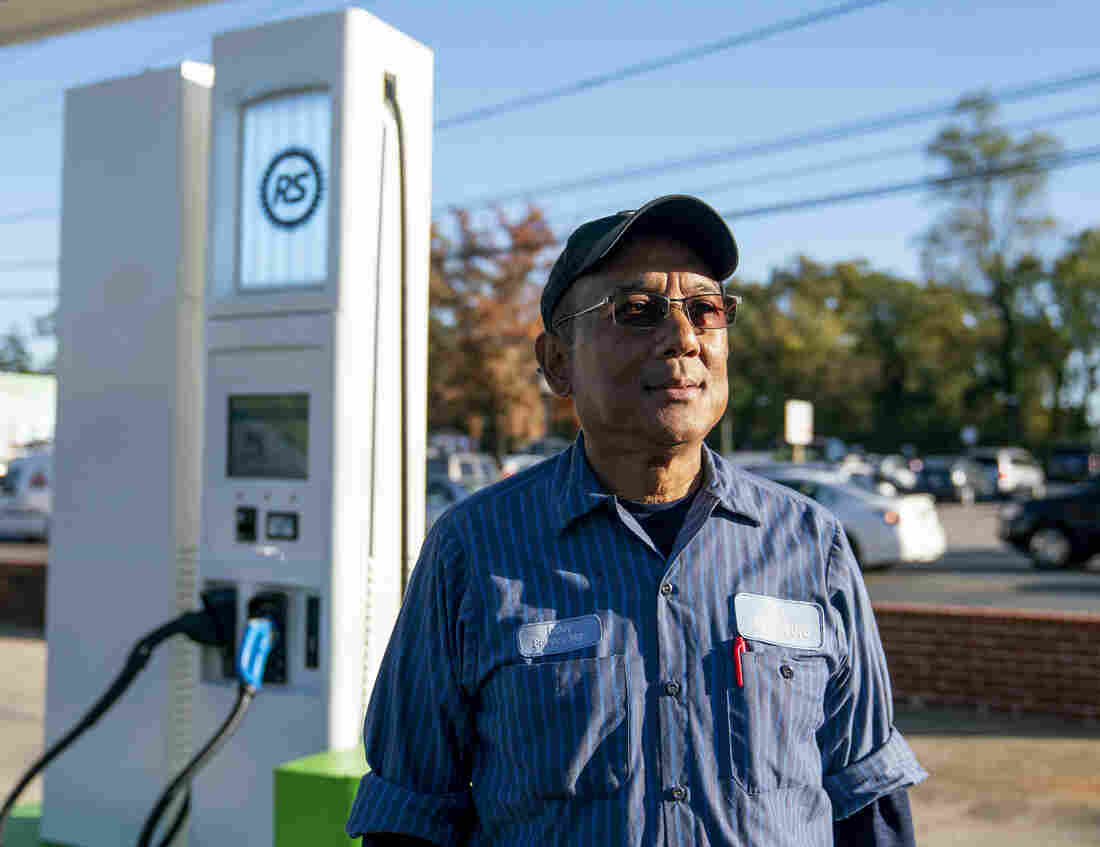 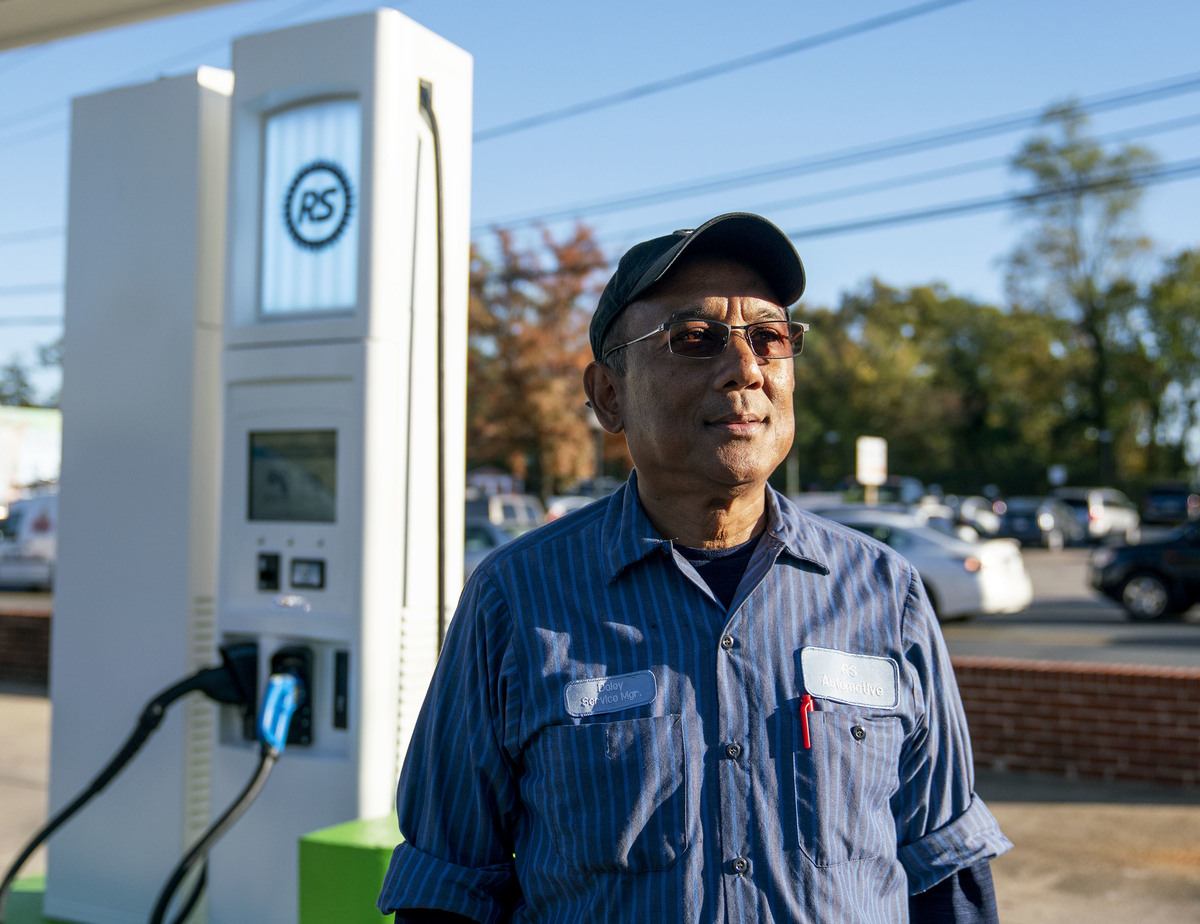 The electric car industry is expanding, and at least one business owner is capitalizing on that growth. RS Automotive — the first U.S. gas station fully converted to an electric vehicle-charging station — opened a month ago in Takoma Park, Md.

A brand new blue and white sign reads EV charging, replacing where the dollar and cents gas price listings stood. From afar, the station's electric chargers don't look too different from their predecessors. Some drivers still think they can still fill up their gas tanks here.

"A lot of them pull up and get upset," says owner Depeswar Doley.

The honks, screeches and vrooms of morning traffic are going strong during a recent visit to the station, but Doley says business has been slow. Over the past week, there have been about eight to 12 charging sessions per day, according to Matthew Wade, CEO of the Electric Vehicle Institute.

Every week, Doley fields calls from gas station owners who are considering replacing their pumps with chargers. Others are EV enthusiasts wanting to visit the station, some hailing from as far as Maine.

There are about 40 types of electric cars people can buy right now, Dan Bowermaster, with the Electric Power Research Institute says, but within four years, there will be closer to 120 on the market.

"Not only is that a much bigger number than what's on the road today," says Bowermaster, "but a third of those will be crossovers and SUVs, and that's what we Americans are buying." 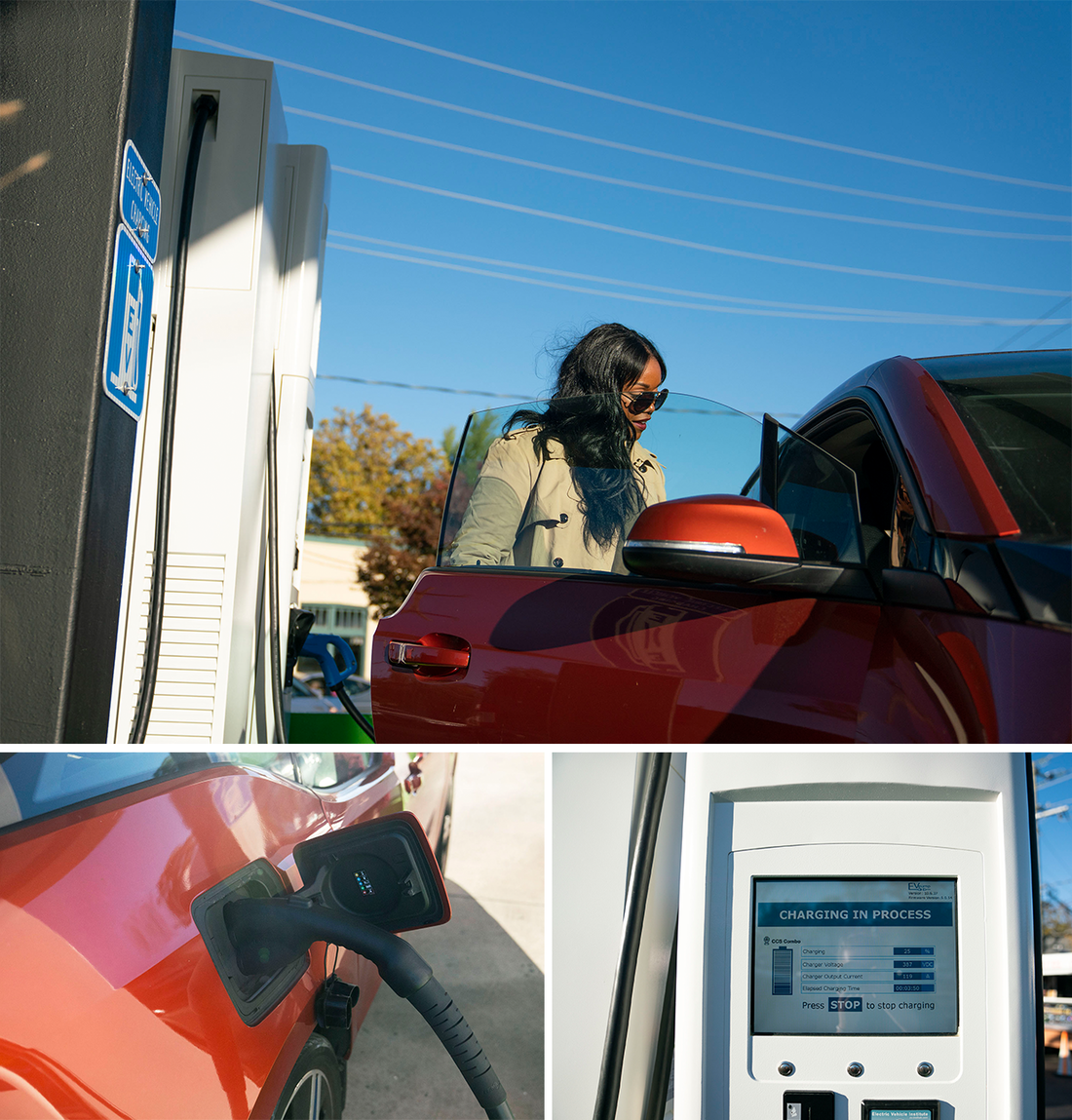 Tamara Robinson, begins charging her car. She has used the station multiple times since its opening a month ago. Mhari Shaw/NPR hide caption 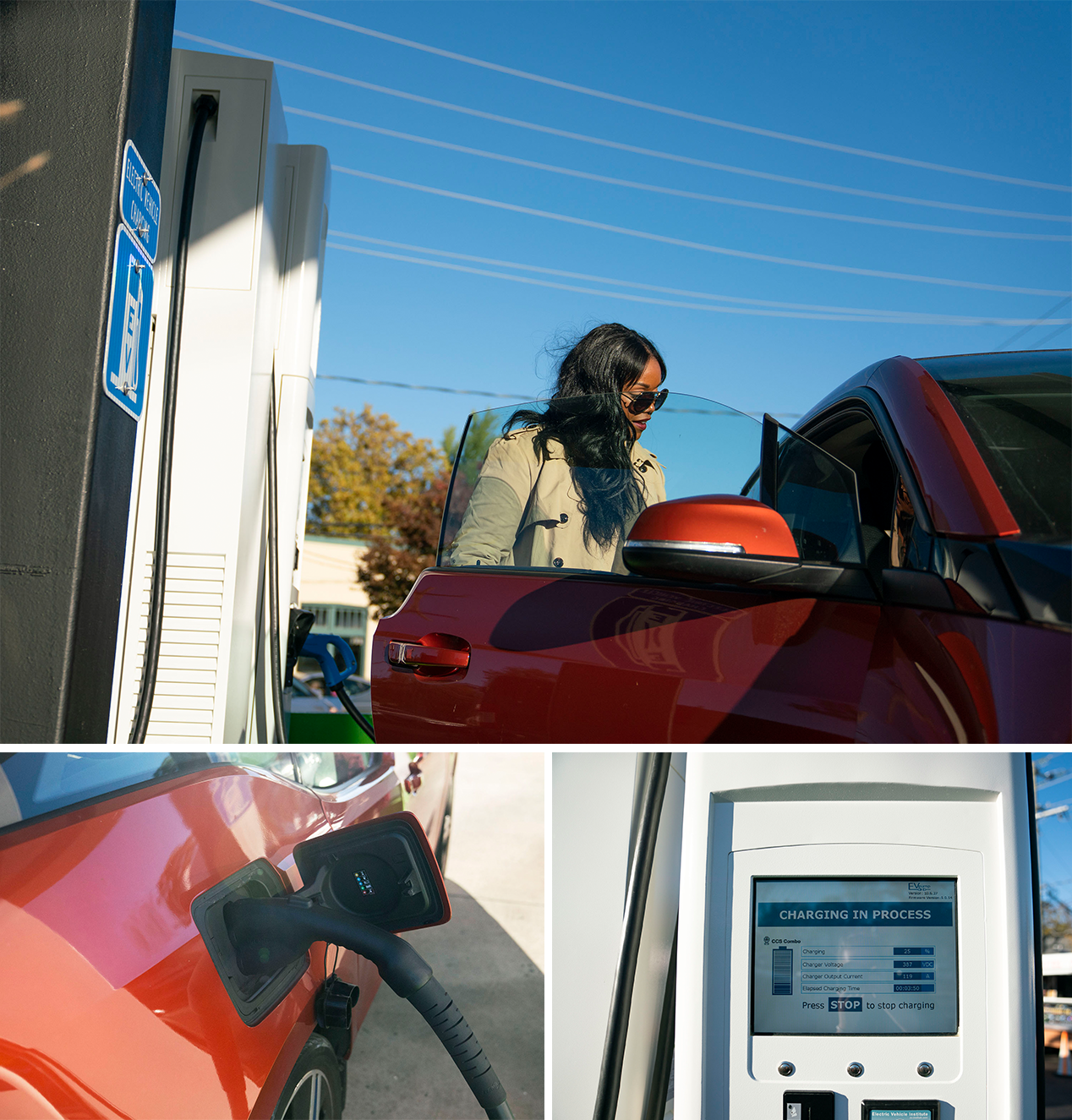 Tamara Robinson, begins charging her car. She has used the station multiple times since its opening a month ago.

Doley is willing to wait. He has owned the independent station and repair shop since 1997. After 20 years of bad contracts, changeable oil prices and convenience store break-ins, Doley says he decided to shut off the gas pumps. He took out a personal loan out to remove the station's underground storage tanks. The plan was to just keep the repair shop open.

Then, Doley got a call from the city: Would he want to transform the station into a fully outfitted charging center? The offer came with a $786,000 grant grant to pay for the conversion — a combination of state funding and money from the Baltimore-based Electric Vehicle Institute.

His 17-year-old daughter, Teresa, pushed him to take the leap. She hopes the station eases drivers charging anxieties.

"I think it's kind of encouraging people to get EVs, a lot of people don't want to get electric vehicles, because they're worried that they're not going to be able to charge them," the teenager says. "And I think that if you make it more available, then people are more likely to want to try it."

As more and more affordable EVs roll out in the next few years, there will be more demand for public charging centers, Bowermaster says.

"There's definitely a very real need to to have these DC fast-charging centers," says Bowermaster, "whether it's for [low-income], for lower-income customers, or for fleets or for those who live in a townhouse, where they just simply don't have a garage with 120-volt or 240-volt outlets."

Most electric cars on the roads today store up to 50 kilowatt-hours of power, explains Wade of the Electric Vehicle Institute. But EVs coming out of companies such as GM and Volkswagen in the next few years will accept up to 200 kWh, so Doley's station is "future-proof," Wade says.

Montgomery County in Maryland has one of the highest rates of EVs on the road, and in January, state utilities got approval to install a network of more than 5,000 charging stations over the next five years.

For Doley, that might mean more and more charging profits down the line. But for now, it seems electric taxis and police cars are the most frequent customers. 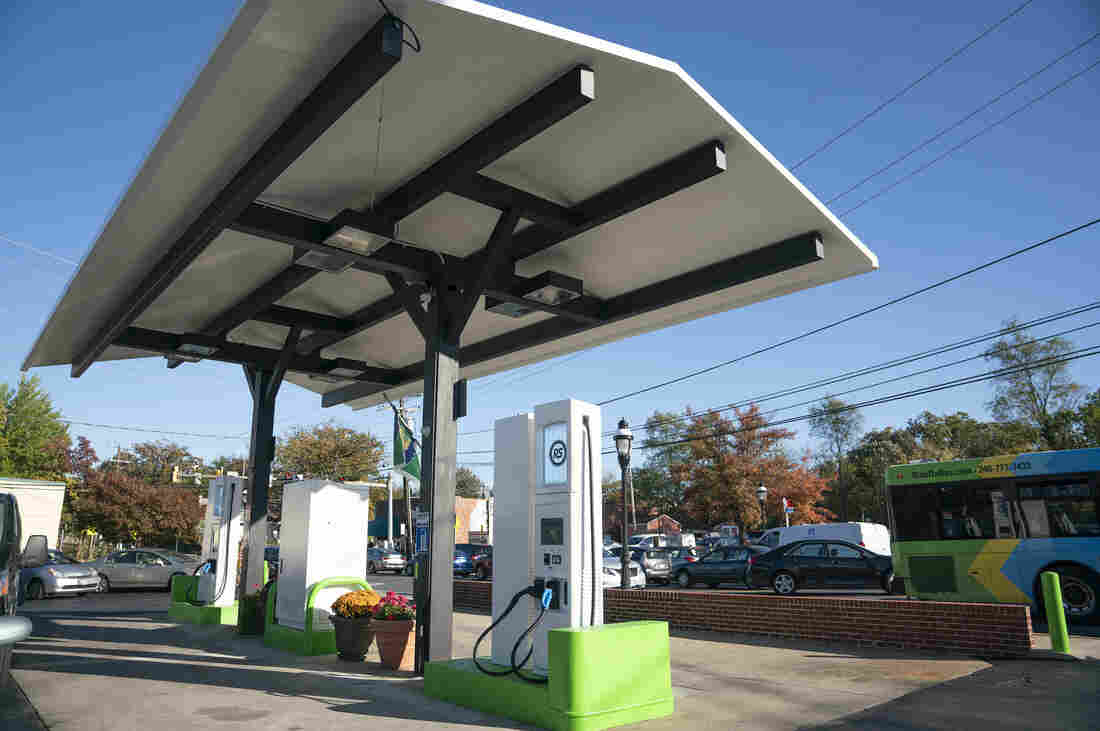 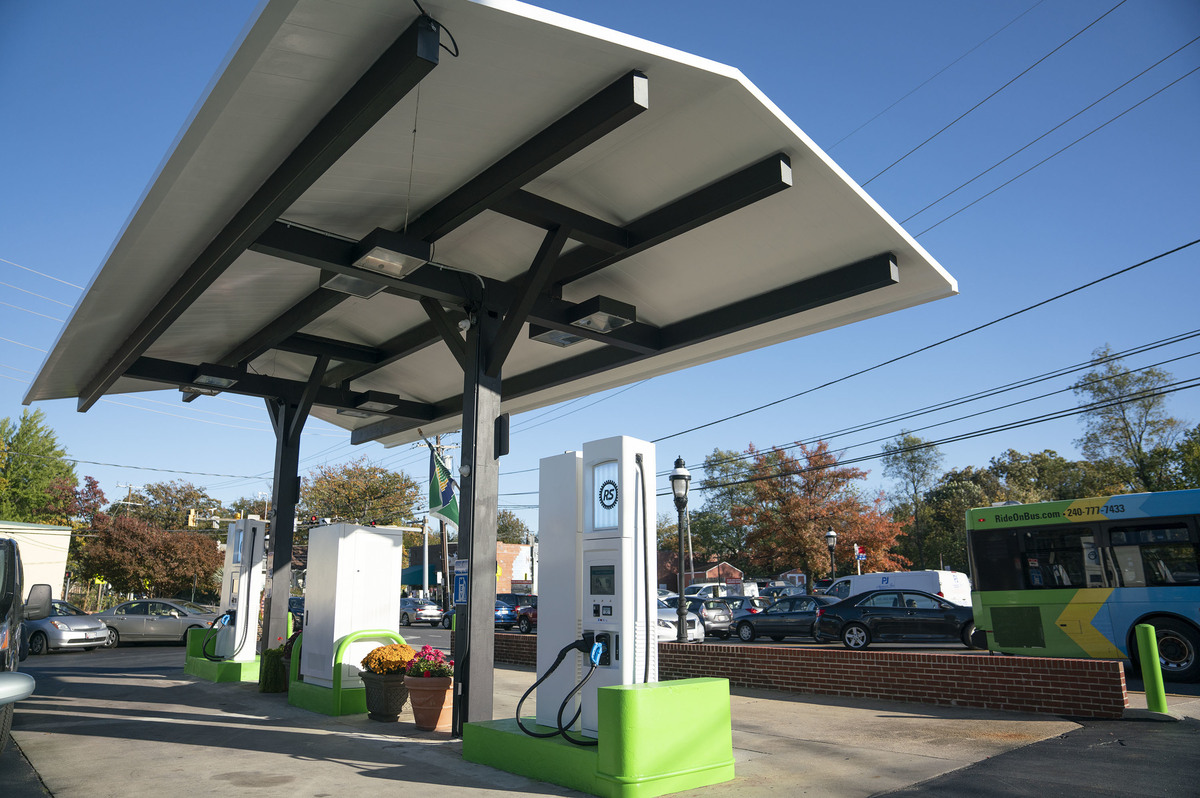 Doley also revamped the station's former convenience store and turned it into a charging lounge, with black leather easy chairs and Wi-Fi. He says he doesn't want to sell food in the lounge. That's in part to encourage drivers to wander around the neighborhood while their car charges, which takes around 15 to 30 minutes.

Ramon Dawes who runs Roland's Unisex Barbershop next door to RS Automotive hasn't noticed a difference in his customer base yet.

"But it's a learning curve," Dawes says. "Got to do something. Save the planet, one step at a time."

Doley gets 66% of the revenue from charging sessions, while EVI, gets 33%. The current charging price is a base of $2.50 plus $0.20 per minute. Doley pays to keep the power flowing, and EVI pays to keep the chargers maintained.

A month after the business opened, Doley remains optimistic.

"If I can spread that one word around, that one little drop, if I can contribute for the betterment of the environment and Earth in general, and for us, humanity, that's more than enough," Doley says. "That's a better reward than the money."

A previous version of the story incorrectly described battery energy in kW. It is actually kilowatt-hours.