Accessibility links
After Harvey, Texas Enacts Tougher Flood Disclosure Law To Help Home Buyers In many places there's no requirement to tell a home buyer if a house is at risk of flooding, even as climate change increases that risk. Some hope a new Texas law will be a national model. 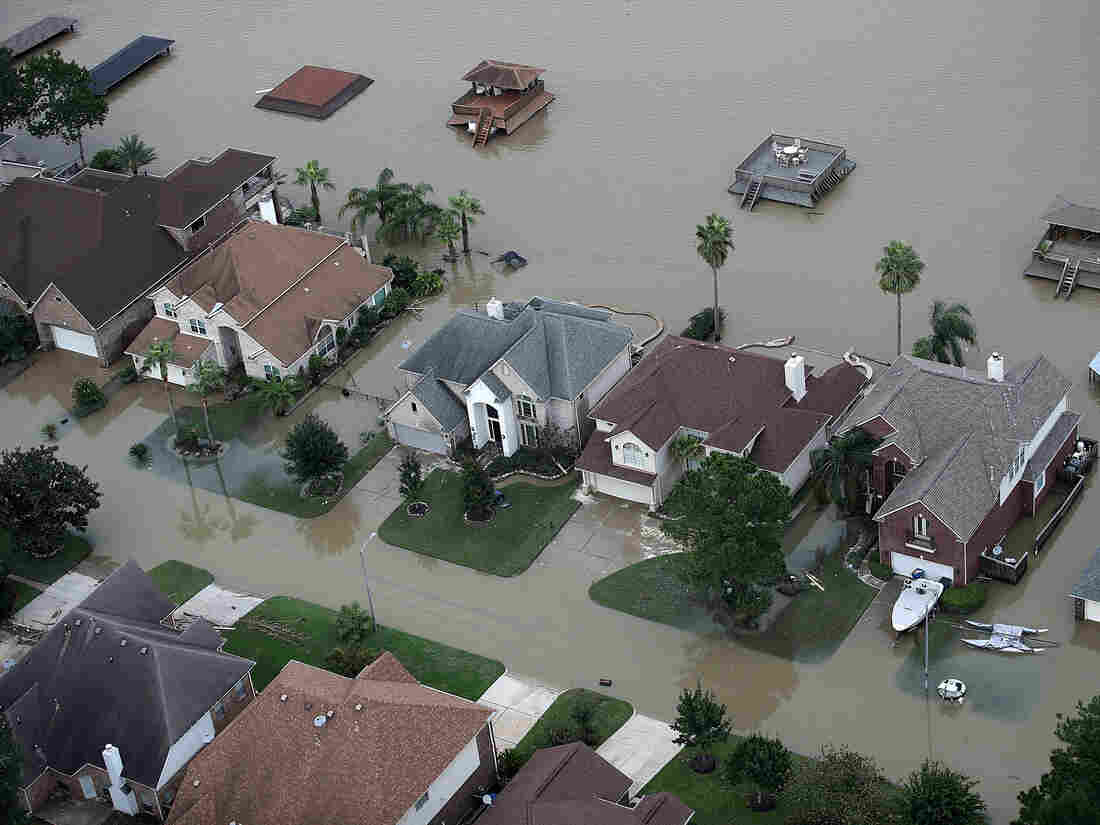 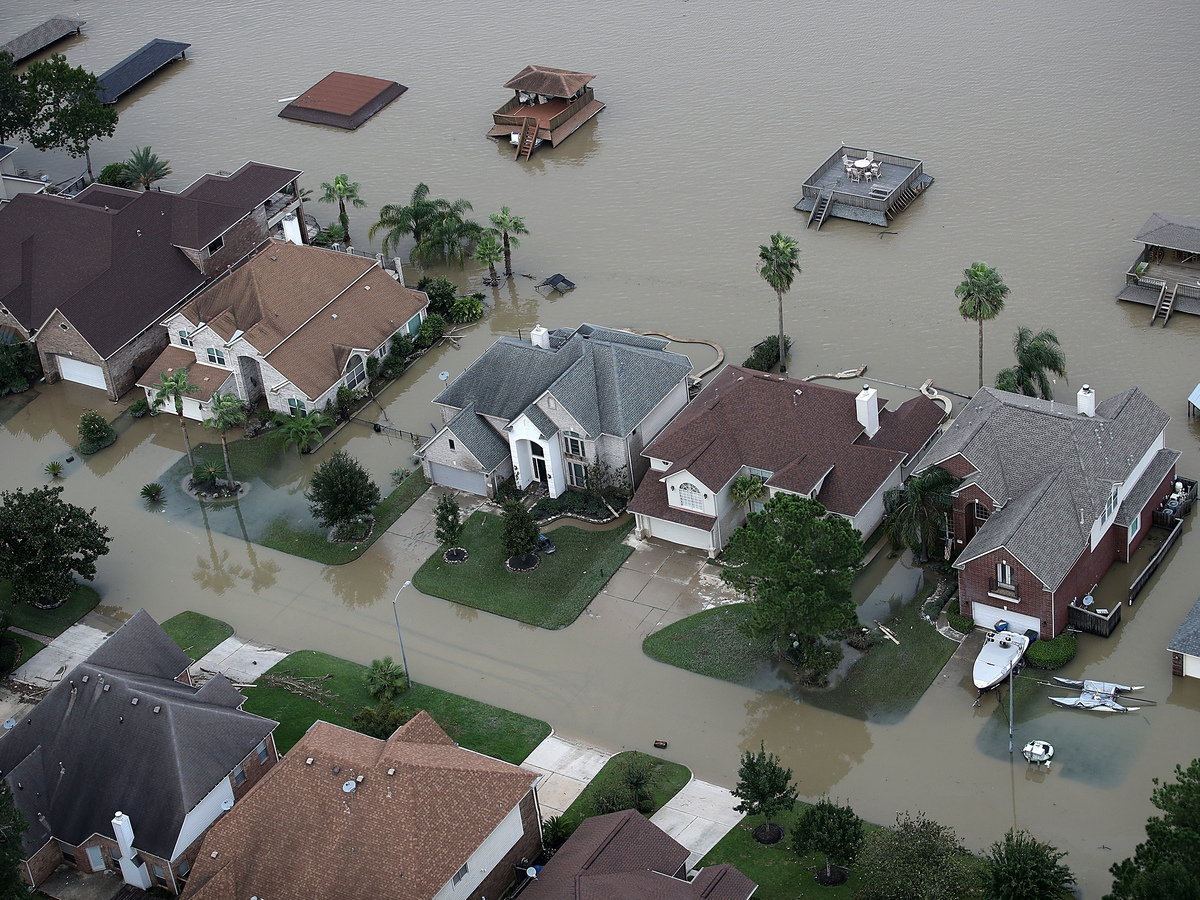 When Arthur Mosely moved to East Austin in the 1980s he didn't worry about flooding. His property was not in a designated floodplain, and he thought of the creek that ran behind the house as an amenity. It guaranteed privacy and a green space full of muscadine grapes and pecan trees.

But over the years more houses went up and the creek flooded repeatedly, almost reaching his house twice. "All of this was water," he explains on a recent windy morning, gesturing to a wide swath of his backyard.

About 15 years ago the city spent millions to try to control that water. It built a flood wall behind the neighborhood and improved drainage. But as the climate has warmed, storms have been getting worse. Recently, engineers looked at the rainfall data and decided the wall isn't enough.

Now, the land is designated as a high risk floodplain.

"I've seen the water come on up to almost the border line of the top of that wall," says Mosely. "So it's kind of frightening."

The conflict between expanding development and growing flood risk became too big to ignore after Hurricane Harvey. That's when historic rainfall flooded thousands of homes in Houston that sat in reservoirs, floodways and other dangerous areas, a risk many homeowners weren't even aware of.

That prompted lawmakers to act this year, greatly expanding what home sellers need to disclose about flood risk. The new law took effect in September.

In another Austin neighborhood, real estate agent Amity Courtois shows off a classic 1950s bungalow and explains the expanded list of questions — eleven in all — now required in the "Seller Disclosure Notice."

They address both flood risk and flood history. For example: Have you ever experienced flooding from a reservoir? Have you ever received emergency flood assistance? Do you presently have flood insurance coverage? Are you located wholly or partly in a 500 year floodplain?

The owner of this house answered "no" to these and the other questions. If the answers had been "yes," Courtois says, the seller would have needed to provide even more information to a potential buyer, and may well have had to lower the asking price.

"It's very specific rather than just big, general questions," says Courtois. She thinks the system will keep home buyers informed while also giving sellers the "chance to explain the situation."

Environmental and public safety advocates, as well as people in the insurance industry, have advocated for this level of disclosure for years. But a surprising number of states still don't require it.

A report by the Natural Resources Defense Council found that 22 states have no mandatory flood risk disclosure and several others have inadequate rules.

"Way to go, Texas," says Rob Moore, who works on water and climate policy for the NRDC.

"We shouldn't be surprised that people make really bad decisions" about where to buy a house, he says, "because state legislatures have basically decided that people shouldn't know that information."

Moore says, ideally, people wouldn't build in high risk areas. But at least with more information home buyers might make better decisions, or at least get flood insurance if they know they may need it.

Knowing a property's history will also give people a better sense of risk because floodplain maps are often outdated and wrong.

"That's why these disclosure laws are so important," Moore says. "You have to go to the source of information which is the owner of the house."

The push for a national disclosure law

Moore's group and others have pushed Congress for a federal law similar to the one in Texas, that would require strong disclosure for states to take part in the National Flood Insurance Program. But the push for a national flood disclosure requirement has been opposed by some in real estate and development, including the National Association of Realtors.

In 2017 the U.S. House of Representatives included a disclosure provision in its vote to reauthorize the National Flood Insurance Program, but the Senate never took it up.

The Future Of Flood Insurance

The Future Of Flood Insurance

A recent survey from the Pew Charitable Trusts found that 74% of Americans support "a national standard requiring home buyers be made aware of repeated property flooding," and requiring those buyers to purchase flood insurance.

"It's a no brainer right?" says Laura Lightbody, Director of Pew's Flood-Prepared Communities initiative. "Once you read more about it... you say, 'Oh my gosh, how is this not something that all 50 states have and that the federal government doesn't require?"'

Sitting in his backyard, Arthur Mosely agrees more disclosure is a good thing.

"Had some of those kinds of [flood] issues been brought up or discussed I would have reconsidered," he says, "because there were some other options that I had."

He says he'll be happy to tell any buyer about the flood risk of his property, if the time ever comes to sell.

In a previous version of this story, muscadine grapes were incorrectly referred to as muscatine grapes.